The story behind the Zsolnay factory 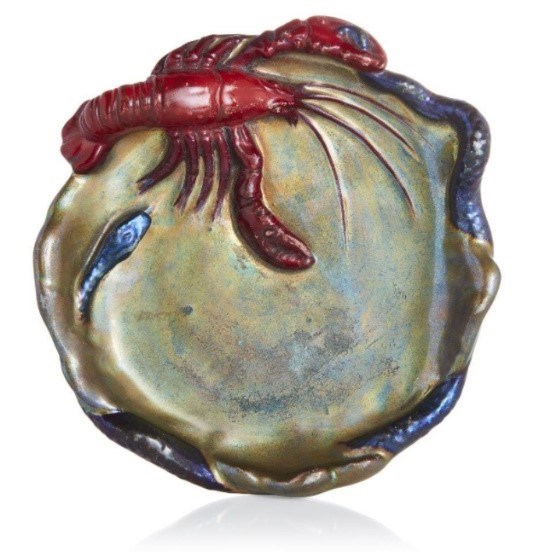 Zsolnay (Hungarian), an Eosin glazed 'Lobster and snake' vide poche the design attributed to Mihály Kapás-Nagy Model designed in 1900 up for sale within Roseberys Design : Decorative Arts 1860 to the Present Day auction on Tuesday 27 April

Here we explore the story behind the Zsolnay Porcelain Factory, renowned for producing fine porcelain and stoneware, and for being one of the largest ceramics manufacturer of the Austro-Hungarian Monarchy, until the turn of the last century.

Zsolnay, or previously known as Zsolnay Porcelánmanufaktúra Zrt (Zsolnay Porcelain Manufactory Private Limited) is a Hungarian manufacturer of porcelain, tiles, and stoneware, which rose to fame after introducing the eosin glazing process and pyrogranite ceramics.

The Zsolnay factory was established in 1853, by Miklós Zsolnay (1800–1880) in Pécs, Hungary, which lies between the South Transdanubian region of rolling hills and the lush forests of Hungary.  In 1863, Miklós’s son, Vilmos Zsolnay (1828–1900), who studied at Vienna's Polytechnical High School, joined the company and became its manager and then director after several years. It was due to the management of Vilmos Zsolnay, the Hungarian industrialist and entrepreneur, that the company is still celebrated today for its striking designs and innovative use of materials. Vilmos Zsolnay attracted talented artists to work at the factory. Alongside artist Lajos Petrik and Vince Wartha, a lecturer at the local polytechnic school, Vilmos Zsolnay created the ‘eosin technique’, whereby a secret substance that has been placed on the glazed porcelain is partly burned away. Thanks to the light refraction, iridescent metallic colours appear after the process is complete. Typical colours include shades of green, red, blue, and purple. This technique, whose name refers to the Greek goddess of dawn Eos, became a trademark of the Zsolnay brand. The eosin-based iridescence became a favourite of art nouveau and Jugendstil artists, among them Sándor Apáti Abt, Lajos Mack, Géza Nikelszky, and József Rippl-Rónai. Vilmos Zsolnay also introduced the use of Pyrogranite to the factory, which is a special ceramic formula. Fired at high temperature, this durable material remains acid and frost-resistant, making it perfect for use as roof tiles, indoor and outdoor decorative ceramics, and fireplaces. This technique, which Zsolnay introduced in the late 1880s, allowed the company to become one of most famous producers of opulent tile and ceramics for exterior use. Architects that used the material in their buildings include Miklós Ybl, Ödön Lechner, Béla Lajta, Samu Pecz, and Imre Steindl. It can be seen on buildings such as Matthias Church, the Hungarian Parliament Building, the Museum of Applied Art, the Geological Institute, the Kőbánya Church, the Gellért Baths in Budapest, Hungary. 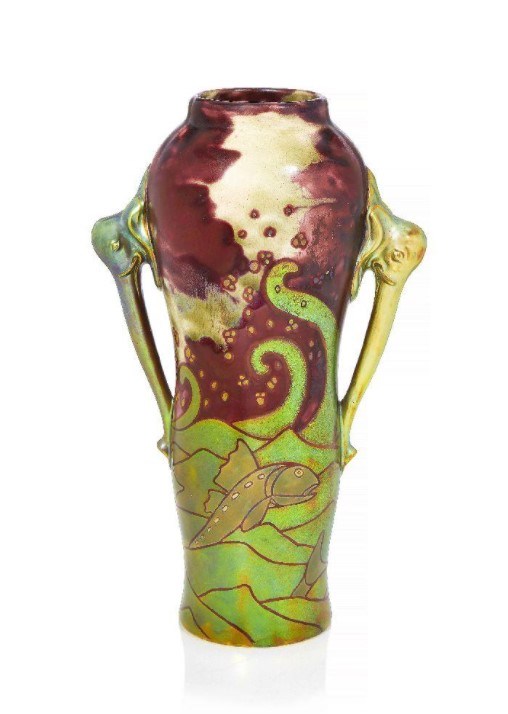 This introduction of new techniques and materials was important in the development of the small family-owned company, and the key to which allowed it to grow into the world-renowned enterprise that is known as today. The industrialist and entrepreneur also led the factory to worldwide recognition by demonstrating its innovative products at world fairs and international exhibitions. After the success of the 1873 World Exhibition in Vienna, the factory garnered many export orders and in 1878 at the Paris World Expo, the company gained even more success receiving a Grand Prix. This was followed by participation in the 1878 World Exhibition (1878) Melbourne (1880), Brussels (1888), Chicago (1893) and Antwerp (1894). As demand for ornamental objects steadily rose in Hungary, an increasing number of specialist outlets opened outside Budapest, and the team behind the Zsolnay factory also continuously developed its international relationships.

During World War I, production of pottery and building materials declined, and the factory produced items for military use mainly, including items such as insulators. After World War I, the fortunes of the factory were weakened due to the Serbian occupation, loss of markets, and difficulty to secure raw materials. However, after the depression, conditions improved.

During World War II, one of the company’s most productive factories in Budapest was bombed. Communism was the final strike of bad luck for the company in 1948. With the rule of communism, the factory was nationalized, and the Zsolnay name was taken off from production. After this, the Pécsi Porcelángyár (Pécs Porcelain Factory) was used primarily to produce common tableware goods. 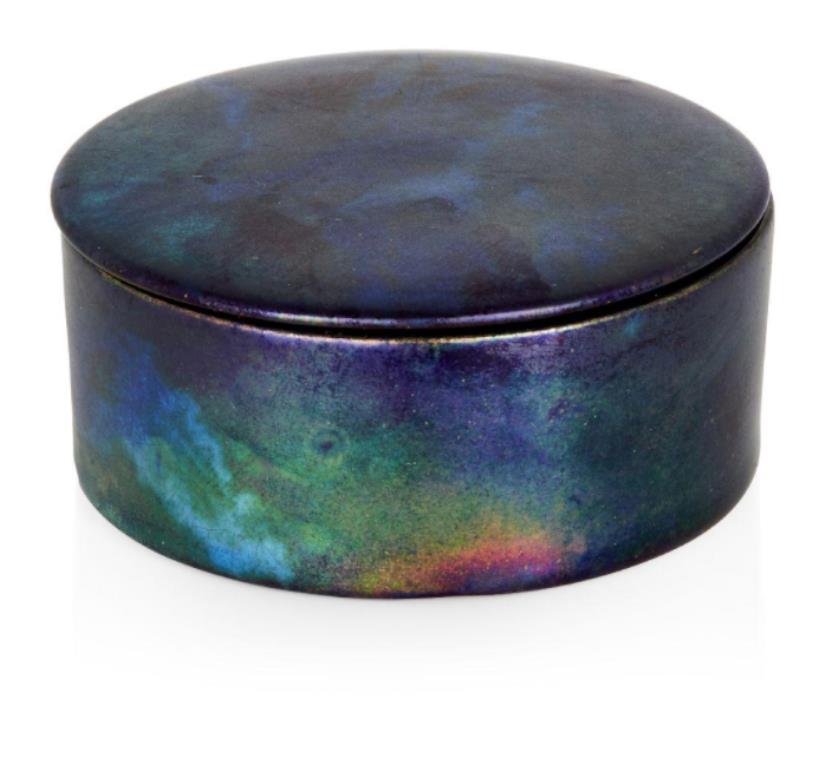 Zsolnay (Hungarian), an Eosin glazed pill box and cover c.1900 up for sale within Roseberys Design : Decorative Arts 1860 to the Present Day auction on Tuesday 27 April

However, in 1982 with the recommencement of a market economy, the company regained its operational independence, and the Zsolnay name returned, but the redeveloped company abandoned the exquisite output for which the brand was known earlier in the century.

In 1991, the Zsolnay Porcelain Manufacture became a stock company, and five years later it was bought by a private equity enterprise. 2003 marked the anniversary of Vilmos Zsolnay's 175th birthday and the 150th anniversary of the factory. In 2012, a Swiss-Syrian businessman called Bachar Najari bought the company from the city of Pécs. Today Zsolnay continues to create original designs as well as issue new editions of past products. Beside the factory, there is also the Zsolnay Museum in Pécs. 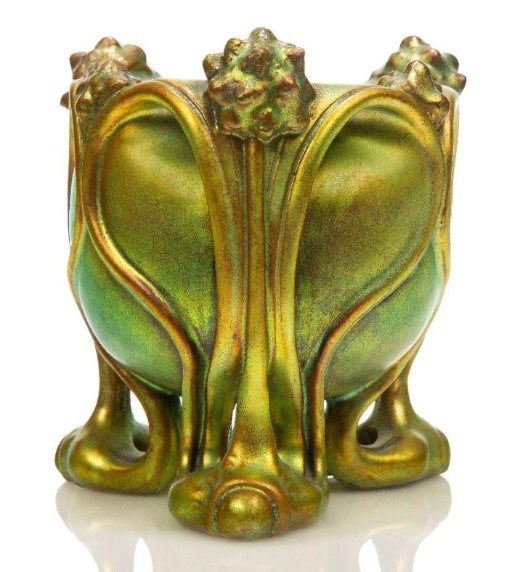 Some of the most sought-after Zsolnay items today are the items that feature the famous luminescent glazes and landscape scenes, which channel Hungarian folklore design. Zsolnay’s intriguing Islamic inspired pieces are also highly coveted by collectors.

Roseberys are fortunate to have sold and are selling many items made within the Zsolnay factory.

Email decarts@roseberys.co.uk to request a complimentary valuation of an Zsolnay item