Works by Scottish Artists feature prominently in the forthcoming Auction 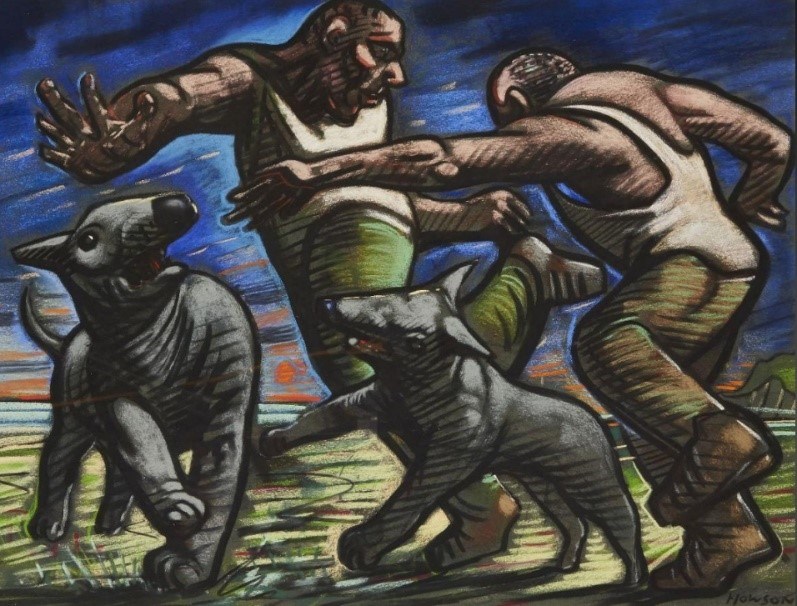 Roseberys is to offer 351 lots of Modern & Contemporary British & Irish Art to the market on Tuesday 15 February, starting at 10.30 am. Included, amongst the many highlights in the sale is a Portrait of Dorette by Gerald Leslie Brockhurst and work by essayist, parodist and caricaturist, Sir Max Beerbohm. A strong theme that runs prominently throughout the auction are exceptional works by Scottish artists, including William McTaggart, John Bellany, Dame Elizabeth Blackadder, Joan Eardley, John Houston and Peter Howson.

Head of Sale, William Summerfield comments: ‘This sale has an intriguing range of exciting items, from a hand-illustrated book by Sir Max Beerbohm, to a Glasgow pastel by Joan Eardley and even a small drawing made by the late Rolling Stone’s drummer (and trained artist), Charlie Watts, for an auction organised by Brian Eno. The Gerald Leslie Brockhurst drawing is an extremely rare find, that is a joy to be offering for sale.’ 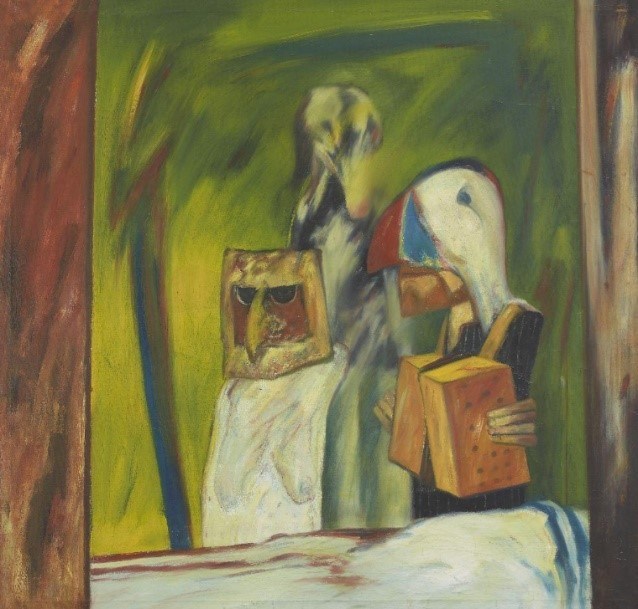 (Lot 35) John Bellany CBE RA HRSA, Scottish 1942-2013 - Three figures at a table, c.1970; oil on canvas, comes with an estimate of £10,000- £15,000. One of the most celebrated Scottish artists of the 20th century, Bellany’s deeply symbolic work contains an unrivalled intensity and power. Using a distinctly Scottish iconography, Bellany’s works explore questions of the human condition, Celtic history and our relationship with the sea. Alongside Alexander Moffat and the poet Hugh MacDiarmid, Bellany sought to create a renaissance in Scottish culture from the 1960s. Inspired by the symbolism of Alan Davie, his work has also been highly influential on a generation of artists, including Damien Hirst, who has been a major collector of his work. 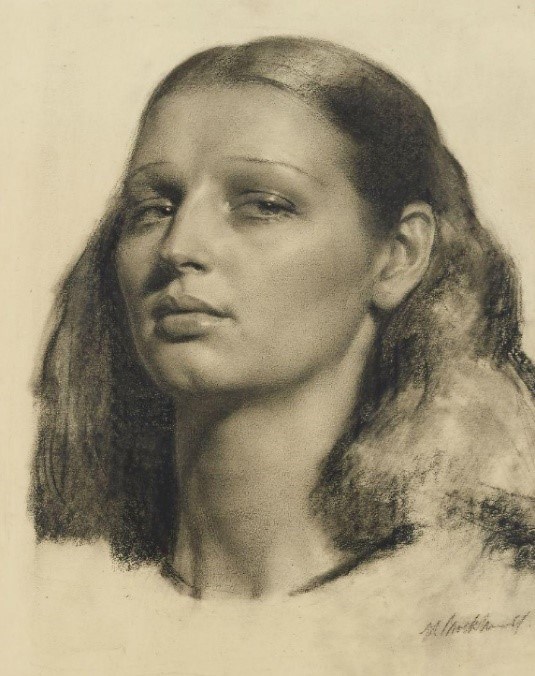 (Lot 7) Offered to the market with a pre-sale guide price of £8,000- £12,000, is a portrait of Dorette, in black chalk on paper by Gerald Leslie Brockhurst ARA RE RP, 1890-1978. Dorette was the artist’s nickname for the model Kathleen Woodward, who became his muse and later his second wife, appearing in many of his works. His portraits of Dorette, from the 1930s, are particularly known for demonstrating the influence of Leonardo da Vinci’s 'Mona Lisa' on the artist, seen here in the piercing yet sensual gaze of the sitter. During this period, Brockhurst also made celebrated portraits of well-known figures including the film stars Merle Oberon and Marlene Dietrich, and Wallis Simpson, the Duchess of Windsor (now in the National Portrait Gallery). Portraits of Dorette are held in public collections including the Harris Museum & Art Gallery, Preston, the McLean Museum and Art Gallery, Greenock, the Lady Lever Art Gallery, Wirral and the Metropolitan Museum in New York. 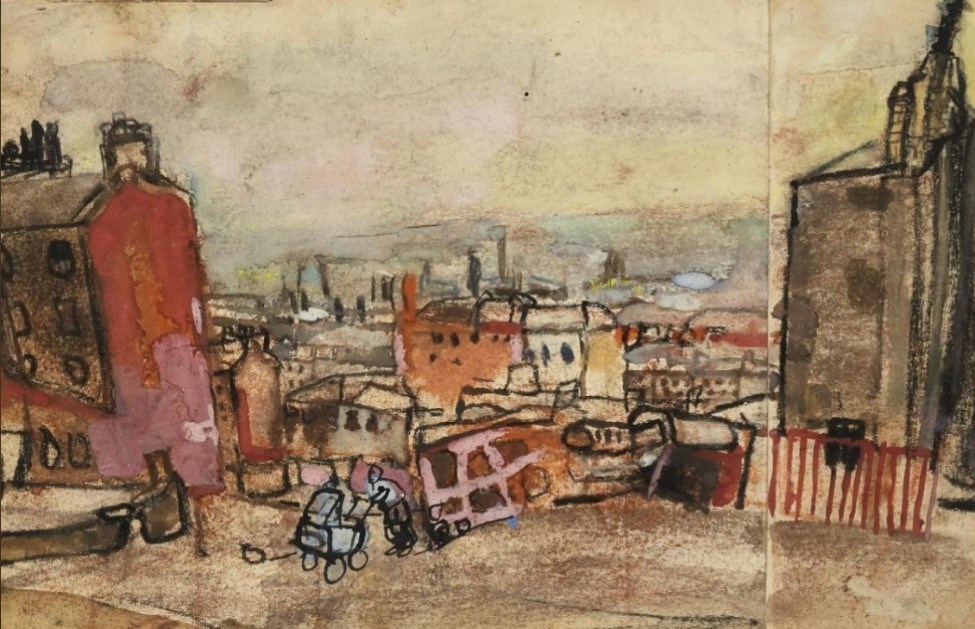 (Lot 34) Joan Eardley RSA, Scottish 1921–1963 - Scene near Port Dundas; watercolour, ink and pastel on two joined pieces of paper, comes with an estimate of £8,000- £12,000. Measuring 14 x 21.43 cm, this work comes with a provenance with New Charing Cross Gallery, Glasgow; private collection. Eardley’s work combines an energetic, often visceral handling, with a deep sense of truth, creating some of the most honest and moving images of the 20th century. The present work demonstrates her unique take on the urban landscape of Glasgow, where the artist lived during the 1950s, creating some of her most enduring works. This work on paper has been in a private collection since the 1960s. The artist first moved to Glasgow in 1940, studying at the Glasgow School of Art alongside Robert McBryde and Robert Colquhoun, and spending much time in the studio of émigré artist Josef Herman, who became a major influence on her work. Later in life, Eardley moved to the remote fishing village of Catterline, creating remarkable seascapes before her untimely death in 1963. 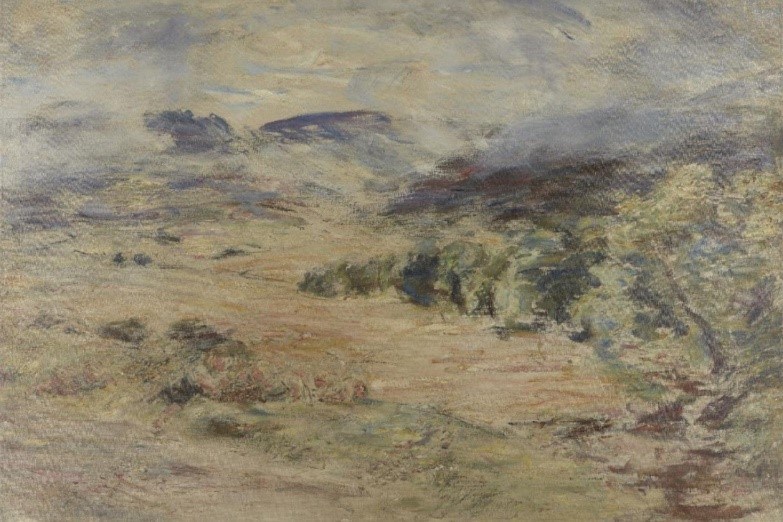 (Lot 2) William McTaggart RSA RWA, Scottish 1835-1910 - Glenramskill, 1908; oil on canvas has been estimated to make £8,000- £12,000 at auction. The oil that measures 98.3 x 147.2 cm comes with a provenance from The Artist's Trustees; The Fine Art Society, London. William McTaggert was a major proponent of Impressionism in Britain from the late 19th century, creating powerful images of the coastal landscape of Scotland. His paintings convey the energy of the sea and the landscape, utilising a fractured yet bold brushwork to evoke the elements. He was heavily influence by the British masters, Turner and Constable. This brilliant example of his mature style characteristically features ethereal figures scattered across the land, emphasising the fragility of humanity against the expanse of nature. The artist painted outdoors, much like the French Impressionists, whose work he may have seen in 1883, when Durand-Ruel staged an exhibition in London. 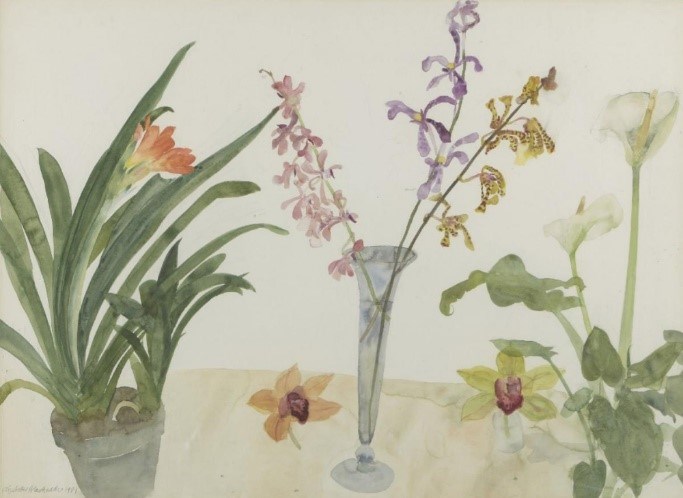 (Lot 41) Dame Elizabeth Blackadder DBE RA RSA RSW, Scottish 1931–2021 - Clivia, Orchids and Arun Lily, 1981; watercolour on paper has been offered onto the market with a pre-sale guide price of £8,000- £12,000. Measuring 58.1 x 79.5 cm, this serene watercolour epitomises Blackadder’s renowned late style, with its focus on careful composition, space and delicate colour. The artist and her husband, John Houston, were highly influenced by their travels in Japan in the 1980s, in particular for Blackadder, in the Zen principles of empty space, seen here in the way still life objects are carefully placed against the white of the blank paper. Blackadder allowed this empty space to become an active element in her work, creating a distinct style and feeling. Blackadder was the first woman to be elected as an academician to the Royal Academy in London and the Royal Scottish Academy. Her work has been exhibited internationally and is now held in all major public UK collections, including the Tate, National Galleries of Scotland and the Government Art Collection. 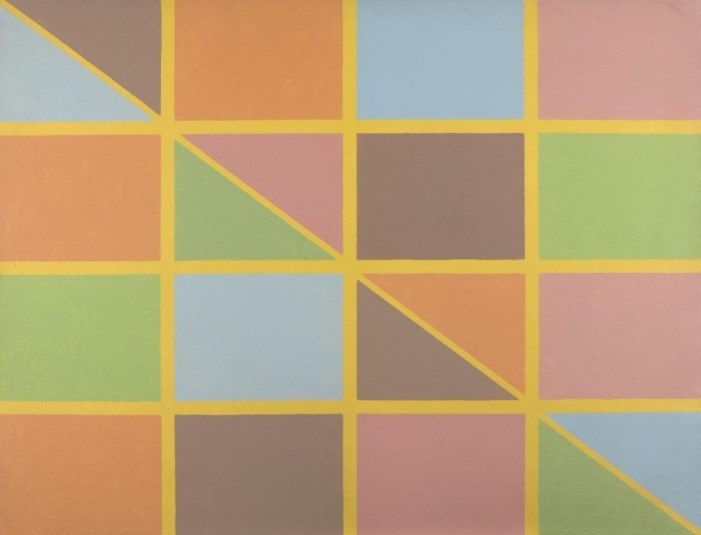 (Lot 37) Jeremy Moon, British 1934–1973 - 5/69, 1969; acrylic on canvas, measuring 101.5 x 132.2 cm, with provenance with Juda Rowan Gallery, London, comes with an estimate of £7,000- £9,000. A star of the 1960s, Jeremy Moon’s work falls between colour field and geometric painting, exploring form in his highly individual palette of soft pastel colour. The present work demonstrates Moon’s continued use of the grid form in his work, the playful pop-influenced colours reacting with the presumed rigidity of this structure. Moon was an important figure in London in the 1960s, living and working in Kingston, and developing a new language of abstraction alongside a new generation of artists that included John Hoyland, Gillian Ayres and Bridget Riley. His work is in collections worldwide, including the Tate, The Calouste Gulbenkian Foundation, Portugal and The Museum of Modern Art, Rio de Janeiro. Important exhibitions have included a retrospective exhibition at The Serpentine in 1976 which toured to other UK venues such as Kettles Yard, Cambridge, Ikon Gallery, Birmingham and the City Art Gallery, Manchester. 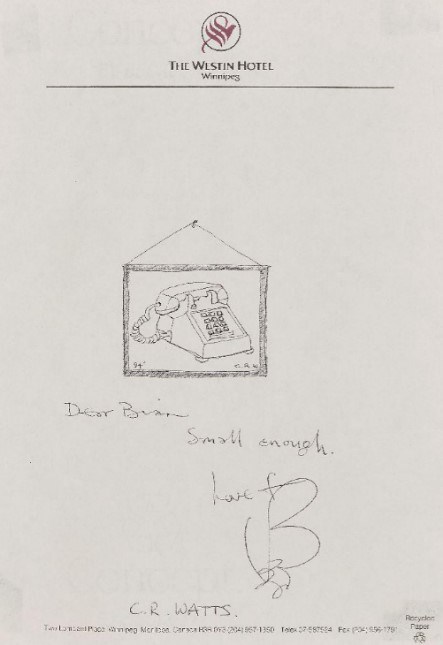 (Lot 47) Charlie Watts, British 1941-2021 - Untitled (Drawing for 'War Child Charity Auction'), 1994; ink on headed letter paper, signed 'C.R. Watts', with provenance from the War Child Charity Auction, Royal College of Art in London, 1994, comes with an estimate of £6,000 - £8,000. The charity auction, organised by Brian Eno, donated by the artist; was purchased by Gimpel Fils, London, The letter reads 'Dear Brian, Small enough. Love from C.R. Watts'. The title is in response to the Brian Eno’s request for ‘A Small Work for a Big Cause’ for the War Child Charity Auction in 1994. Rolling Stones drummer Charlie Watts had studied at art school, later working as a graphic designer in the 1960s. In 1962 he met Mick Jagger, Keith Richards and Brian Jones, finally agreeing to join the band in 1963. He created artworks for the early Rolling Stones records including 'Between the Buttons'. 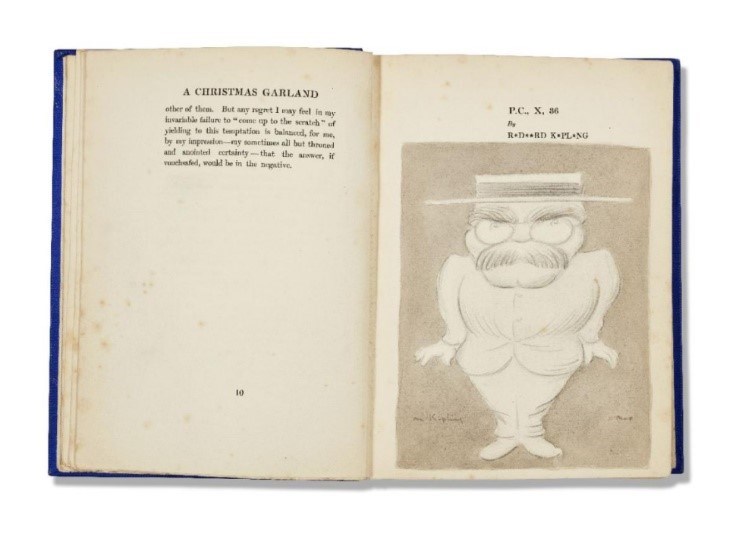 Sir Max Beerbohm, British 1872-1956 – 'A Christmas Garland' woven by Max Beerbohm with 16 original pencil and watercolour drawings by the artist, 1916

(Lot 359) Sir Max Beerbohm, British 1872-1956 – 'A Christmas Garland' woven by Max Beerbohm with 16 original pencil and watercolour drawings by the artist, 1916, comes with an estimate of £3,000- £5,000. 'A Christmas Garland' is a series of parodies written by Beerbohm of the greatest writers of the day and has been celebrated as one of the best parodies in the English language. This extraordinary edition features handwritten texts and original drawings by Beerbohm of these writers, including Thomas Hardy, H.G. Wells and Rudyard Kipling. Beerbohm also left a blank page for the parody of Henry James, 'The Mote in the Middle Distance', with an inscription that reads, 'here ought to be the first of my little illustrations. But I leave a blank space - pending fulfilment of our hope that health and activity will yet be given back to the consummate artist and well-beloved man whose work is here parodied.' Sir Max Beerbohm was a famous writer, comic and caricaturist, and was a noted dandy of his day. His formed an artistic circle with Oscar Wilde, Audrey Beardsley and Sir William Rothenstein, and his work was included in major publications such as 'The Yellow Book' in 1894. His caricatures and are regarded for their lightness of touch and precision of line, and his signature enlarged heads. Exhibitions of his drawings were held at the Carfax Gallery and the Leicester Galleries in his lifetime. Many of these works are now in public collections, including with the Ashmolean Museum, Oxford, the Tate and the V & A. 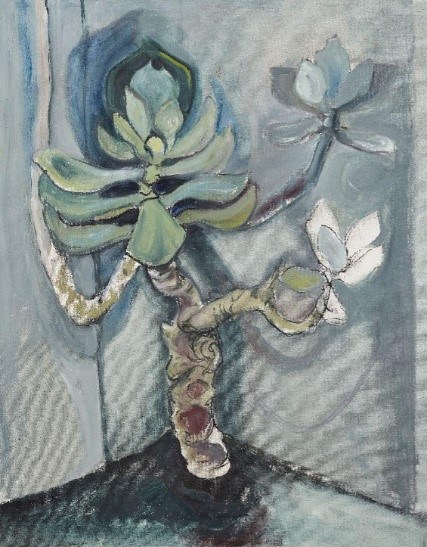 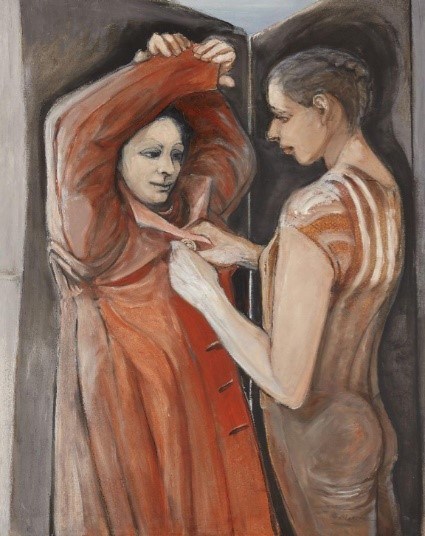 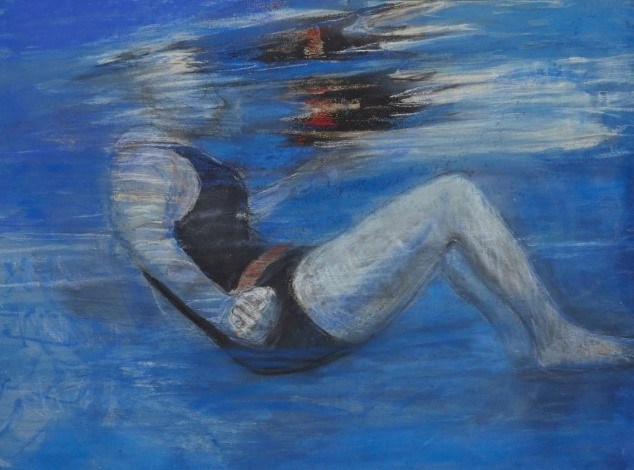 (295-297) There are three works by Jacqueline Morreau in the sale, ranging in estimates from £600 up to £900, including mediums of oil and pastel on canvas and paper. Jacqueline Morreau (1929-2016) was an American born artist who worked figuratively in the USA and UK. A number of her works are critical and politically inspired frequently inspired by a growing interest in feminism and female sexual agency. Rewriting and rereading mythology, Morreau’s work becomes a vehicle of revelation about women’s desire, psychology and perspectives. Morreau collaborated with other female artists, including Sue Coe, Marisa Rueda and Pam Skelton. In 1972, Morreau moved to London, where she started to exhibit. In 1980 she had curated two seminal touring exhibitions which started at the ICA London, 'Women's Images of Men' and 'About Time'. Morreau taught in the Royal Academy of Art, Regents and Oxford Universities. These three works come directly to Rosebery’s from the artist’s estate.