Roseberys first Modern & Contemporary Prints & Multiples auction of the year on Tuesday 9th March played host to a bounty of incredible sale results.  A running theme throughout the highlights were prints by female artists such as Dame Laura Knight, Eve Arnold, Yayoi Kusama and Tracey Emin. Furthermore, the Modern British works had close to a 100% sell through rate, showing a trend in buying domestic artists, which included iconic works by Henry Moore and Howard Hodgkin to more contemporary artists including The Connor Brothers, David Shrigley, Stik, Banksy and Mr. Doodle. 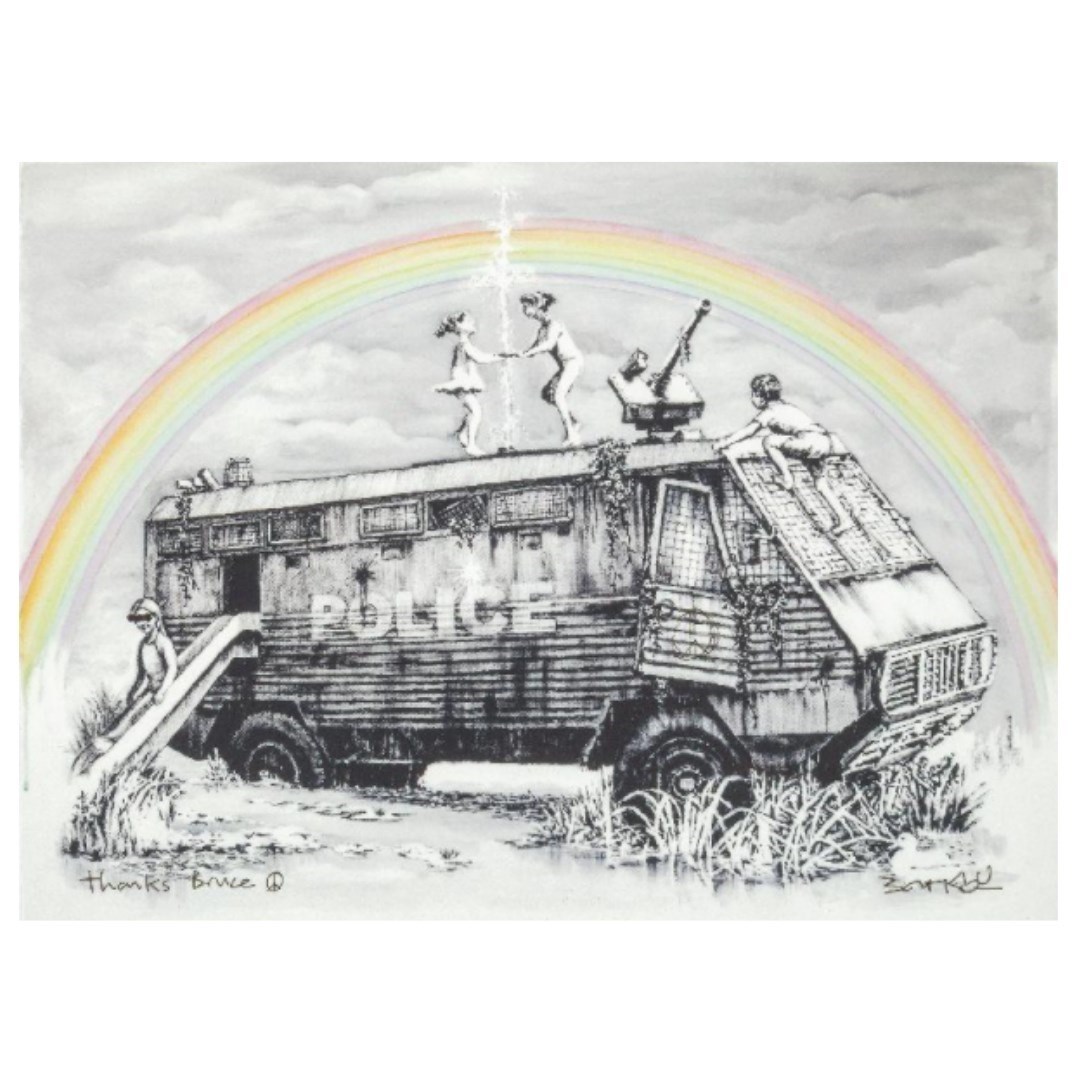 Leading the sale was lot 319, Banksy’s ‘Police Riot Van’, a digital print in colours with hand finish on wove, made in 2015. Estimated to sell for £15,000 - £20,000, this work made a result high over its top estimate, realising a price of £21,250. The print on offer was one of 52 prints given to employees from Banksy at Dismaland, the temporary art project organised by the street artist in the seaside resort of Weston-super-Mare. The print came accompanied by a Dismaland hi-vis jacket and tin can lid Mickey Mouse ears, worn by the employee during their time working at the park. It also came with a bank statement and payslip issued by BM Dismaland Ltd. 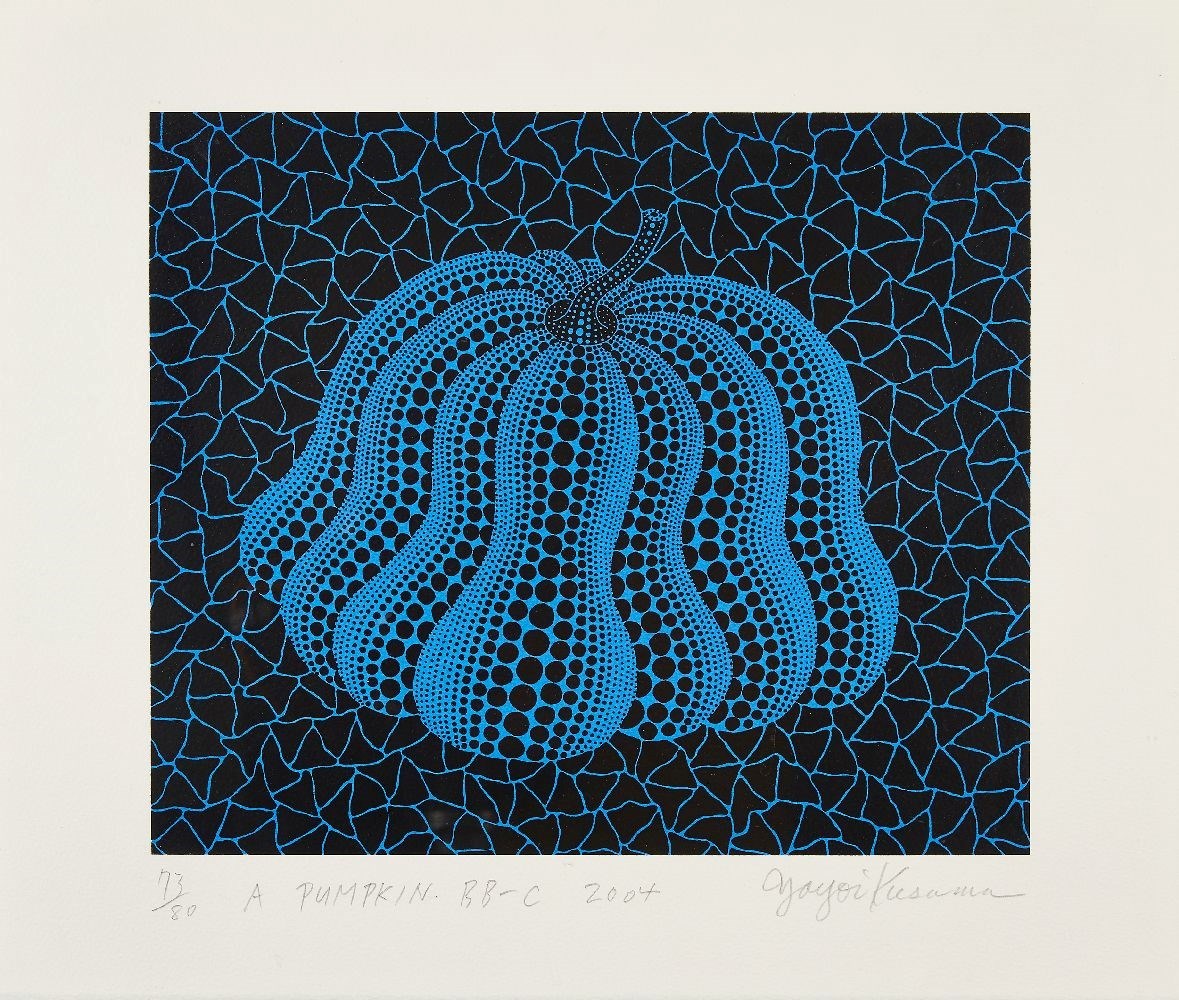 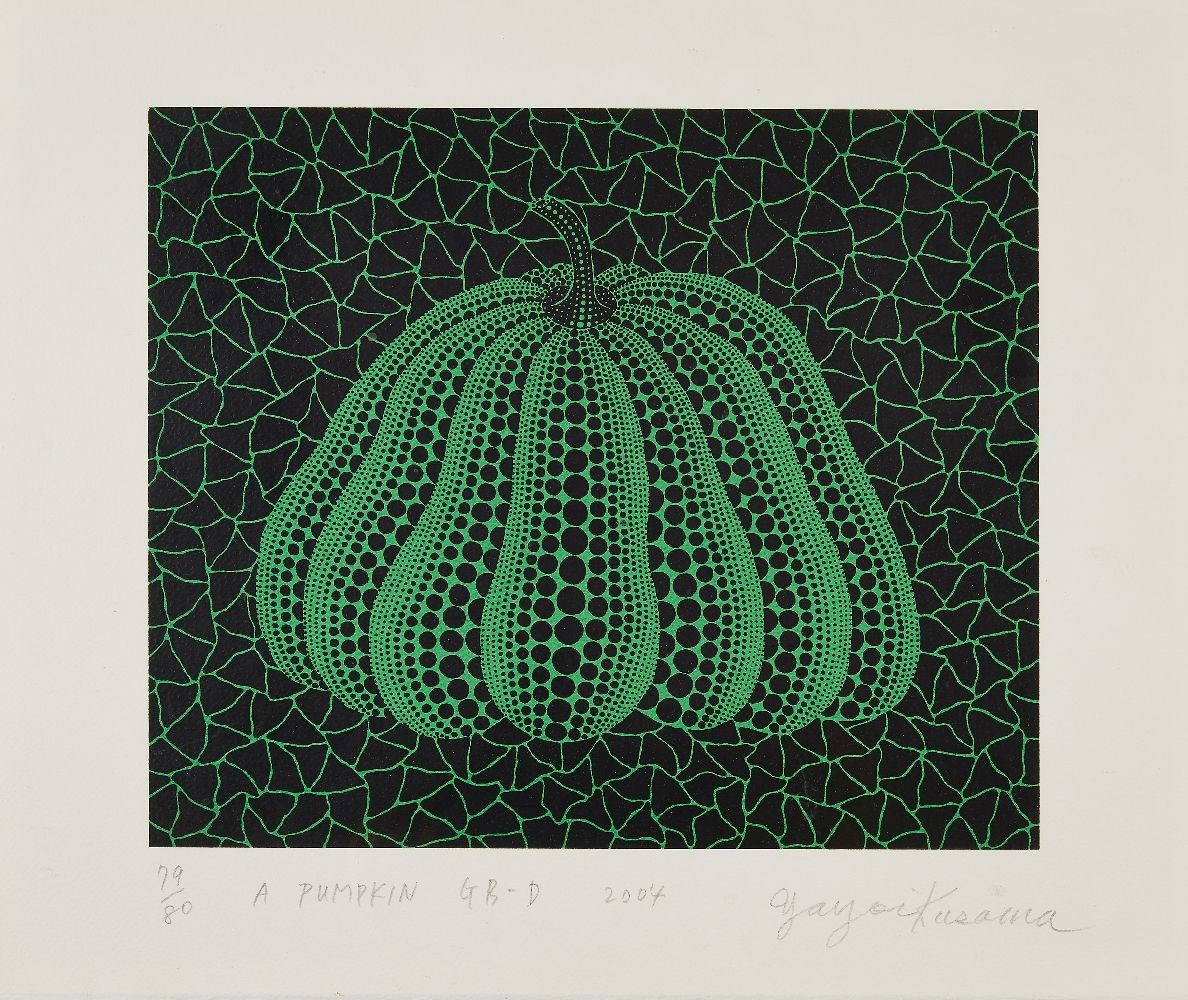 Two highly covetable pumpkin prints by Japanese artist Yayoi Kusama. ‘A Pumpkin BB-C [Kusama 329’] in blue and ‘A Pumpkin GB-D [Kusama 332] ‘in green, both realised outstanding results, jointly amounting to the price of £51,250. Both screenprints in colour on arches wove were produced in 2004 and came with a provenance purchased from the publisher, Okabe Hanga Shuppan, Kanagawa, Japan. They equally came with an estimate of £12,000- £18,000, and mutually achieved prices high over their top estimates.  ‘Pumpkin BB-C [Kusama 329]’ the blue pumpkin sold for the higher price of £27,500, and ‘Pumpkin GB-D [Kusama 332’] in green sold for £23,750. Yayoi Kusama has consolidated a name for herself for her genius and innovative work. Her aesthetic is perhaps best typified by her pumpkin art such as the lots sold at Roseberys. When asked, in 2012, why she had decided to use pumpkins in her work, she gave the answer: ‘Pumpkins are visually humorous.’ 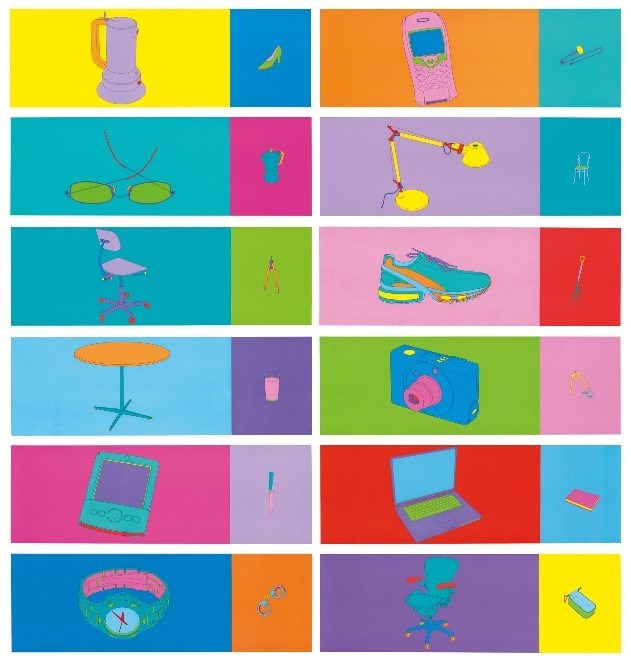 A collection of works by Irish-born contemporary conceptual artist and painter Michael Craig-Martin CBE RA that were estimated to sell for £4,000 – £6,000, realised a price of £8,750. Craig-Martin is known for fostering and adopting the Young British Artists, many of whom he taught. He is now an Emeritus Professor of Fine Art at Goldsmiths. The complete suite of twelve screen prints in colours on wove are all individually framed, ready to be hung up on the wall. 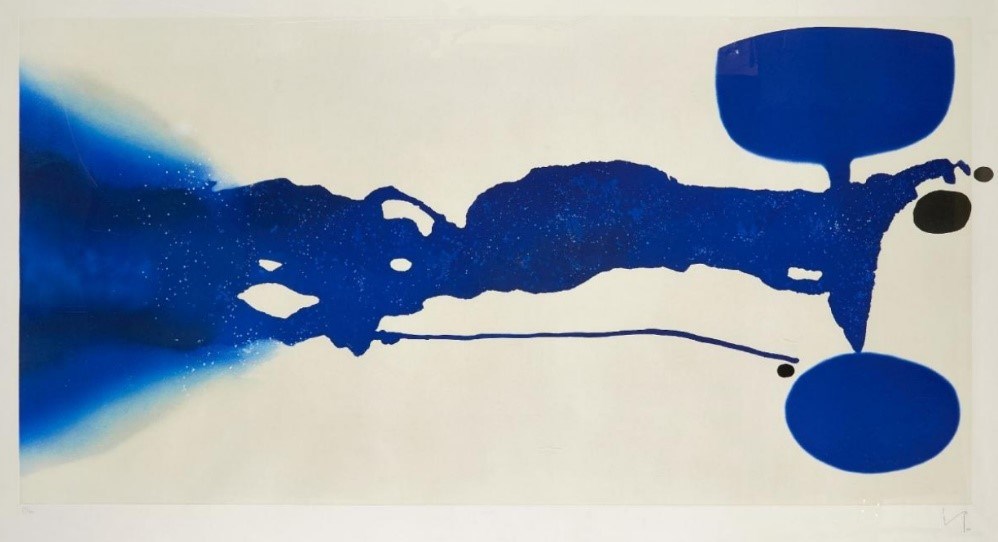 Entered onto the market with an estimate of £1,500 - £2,000 the etching with aquatint in colours on Magnani wove titled ‘Stromboli’ by British pioneering artist, Victor Pasmore CH CBE (1908-1998) realised the price of £8,750. Stromboli was one of a series of etchings made at the 2RC studio in Rome, for which Pasmore used a very direct method of working on the plate to produce large and fluid areas of colour aquatint.

This screenprint in colours on wove titled ‘For John Constable’ by British artist Ivon Hitchens (1893-1979) was entered into the auction with a low estimate of £200 - £300 due to its condition. This however didn’t deter avid buyers, and the works rarity outshone the discoloured paper finally making a price of £3,250 on the day.  Hitchens is much-loved for his landscape paintings featuring swathes of bright colour, many painted in the open air, such as the work offered at Roseberys. 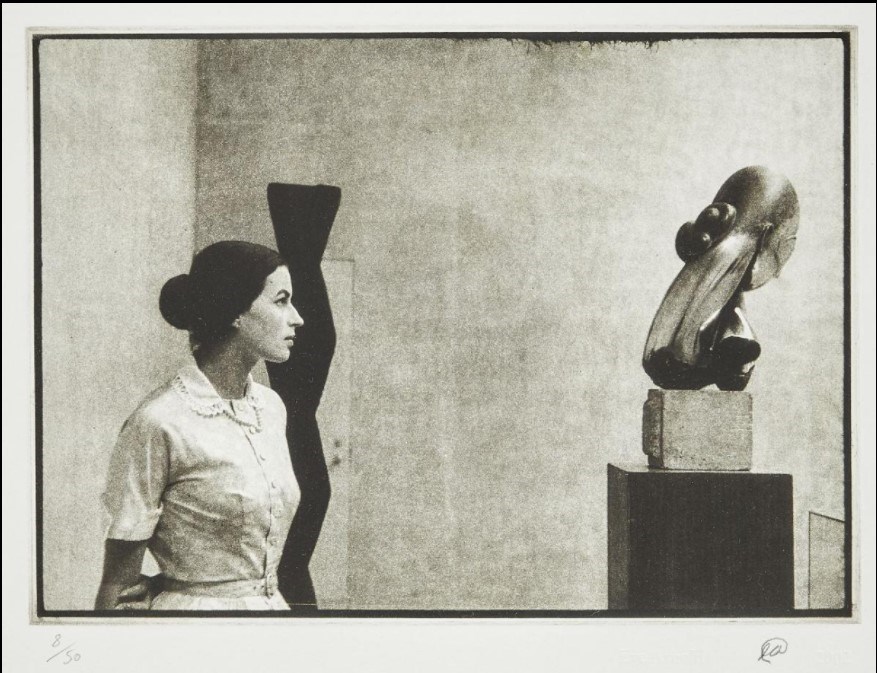 Photogravure by American photojournalist Eve Arnold, OBE, Hon. FRPS (1912-2012), titled ‘Silvana Mangano, Museum of Modern Art, New York City’ taken in 1956, sold for £3,050 over its top estimate, making £3,250. These prints were made for an Eve Arnold exhibition at Zelda Cheatle Gallery, London in 2002, attended by the artist. Arnold, was a trailblazing female photographer, she was the first woman to join Magnum Photos agency in 1951. 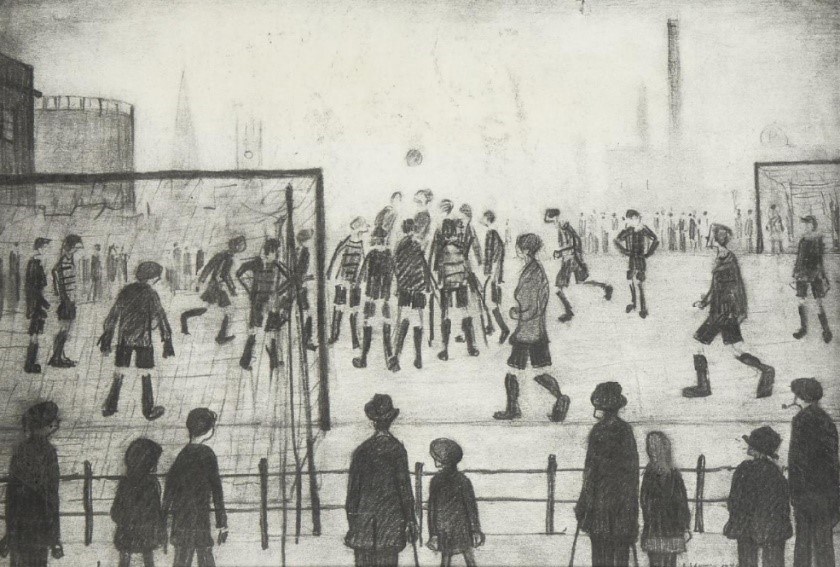 A lithograph by pioneering British artist Laurence Stephen Lowry RBA RA, titled ‘The Football Match’ estimated to make £1,000 - £1,500, realised a price of £3,750. Painted originally in 1938, it is a rare Lowry painting to depict a real event, rather than an imagined composite of different locations or events. The scene is thought to depict a Second Division game between the two clubs on 22 October 1938, in which Manchester City won. The composition of the artwork is done with Lowry’s signature birds-eye view panoramic, showing not only the football game but also smoking chimneys – one of the artist’s other most iconic motifs. The Football Match, has previously been described by Christie’s London as “a modern masterpiece”. 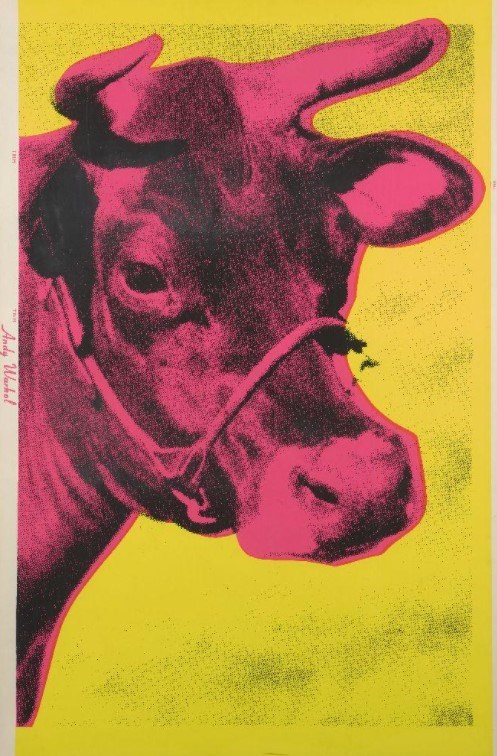 Rounding up the highlight sale results within the auction was this screenprint wallpaper in colours on wove, aptly titled ‘Cow’ created in 1966. Offered to the market at £2,000 – £3,000, the print beat its top estimate price to achieve the result of £8,750 at auction. Warhol was well-known for his portraits of celebrities and representation of American consumerism in popular culture. The subject of a cow therefore seems surprising for an artist with such a reputation; however, Warhol’s Cow series is one of the most identifiable prints in the artist’s oeuvre. Warhol was encouraged to consider the subject of the cow by instrumental Pop art dealer Ivan Karp. Warhol commented on the suggestion: ‘Why don’t you paint some cows, they’re so wonderfully pastoral and such a durable image in the history of the arts. I don’t know how ‘pastoral’ he expected me to make them, but when he saw the huge cow heads ‘bright pink on a bright yellow background’ that I was going to have made into rolls of wallpaper, he was shocked. But after a moment he exploded with: ‘They’re super-pastoral! They’re ridiculous! They’re blazingly bright and vulgar!’ I mean, he loved those cows and for my next show we papered all the walls in the gallery with them.”.

To view all the results from the sale click here