LONDON: Roseberys are delighted to present our second live Modern & Contemporary Prints & Multiples sale of the year on Tuesday 6 October. This highly anticipated auction that is popular amongst modern and contemporary art aficionados alike will compromise of 414 lots in total. Estimated prices range from as low as £100 up to £20,000, for artwork by new and established artists in various mediums, genres and styles.

Shane Xu, Head of the Modern & Contemporary Prints & Multiples department comments: ‘This sale shows a larger variety of works compared to our previous sales. A strong section of the auction from lots 224-241 are by leading American contemporary artists such as Andy Warhol, Jeff Koons and Alex Katz. Also, on offer is an incredible selection of Modern British artwork, with many rare editioned multiples and books available.’

Damien Hirst, British b.1965- M-Fluorobenzylamine, 2018; woodcut in colours on wove

Leading the sale is lot 347 by Damien Hirst. The artwork titled ‘M-Fluorobenzylamine’ was created in 2018 by using woodcut in colours on wove. Estimated to make between £16,000- £20,000 this work stands out as an iconic design from the British artist using one of the oldest printing techniques, which produces a beautiful texture to the artwork. The spot paintings are amongst Hirst’s most widely recognised works. Of the thirteen sub-series within the spots category, the ‘Pharmaceutical’ paintings such as the lot on offer are the first and most prolific. For Hirst, it was a departure from years of experimenting with paint and collage, and the first result of his search for a contemporary art form that could succeed without a reliance on “already organised elements.” As the Guardian reported on the artists spotty series - ‘Hirst's spot paintings are taking over the planet.’ Within the sale there are seven works of art by the artist up for auction.

Lot 355 by Brazilian photographer Vik Muniz titled ‘The Tree (Pictures of Junk)’ created in 2009 is estimated to make £8,000- £12,000. Initially a sculptor, Muniz grew interested with the photographic representations of his work, eventually focusing completely on photography. His work that has a large environmental emphasis has been met with both commercial success and critical acclaim, and has been exhibited worldwide. At first glance the artwork up for auction seems to present a familiar image, however true to Muniz’s style if you examine the picture up close, it turns out to be made from surprising mediums. “What I want to be able to do is to change the lives of people with the same materials they deal with every day.” Muniz commented to the New York Times about his practice.

A highlight within the American Contemporary and Modern art section of the sale is lot 231. This artwork by American artist Jeff Koons titled ‘Dolphin Saddle’ produced in 2009 features the reoccurring dolphin motif within his work. This signed lithograph in colours on wove is estimated to sell for £8,000- £12,000. His original works have sold for substantial sums, including at least two record auction prices for a work by a living artist: $58.4 million for Balloon Dog (Orange) in 2013 and $91.1 million for Rabbit in 2019. Koons is widely recognized for his work dealing with popular culture and his sculptures depicting everyday objects, including balloon animals. Toward the end of the sale from 404 – 407 we have a range of colourful ‘Balloon Dogs’ after Jeff Koons published by Editions Studio up for auction at a lower estimated price points, all £600 - £800.

Closely following the iconic work by Koons is lot 229 by world famous Pop Artist, Andy Warhol. ‘Nike Sneakers Representing Peter Moore [F. & S. IIIB.36]’ created in 1984; screenprint in colours on wove is stamped with Estate of Andy Warhol and The Andy Warhol Foundation for the Visual Arts. The print was purchased by the current owner at Andy Warhol @ Christies: Always in Fashion auction in October, 2014. It is estimated to make £3,000- £5,000 at the Roseberys auction. Andy Warhol’s work is currently on show at the Tate Modern in London until 15th November, 2020.

Another highlight coming from the American section of the sale is lot 239 by Sol LeWitt, 1928-2007. The American artist who is regarded as a founder of both Minimal and Conceptual art was a master of a prolific wide range of media. Up for auction at Roseberys is two works of art, the highlight being ‘Tondo Stars’ created in 2002, which is being entered onto the market at £6,000- £8,000. This series of linocuts are a wonderful example of LeWitt’s vibrant and minimal style. The other work on offer by the artist is lot 240 ‘The Location of Lines’. 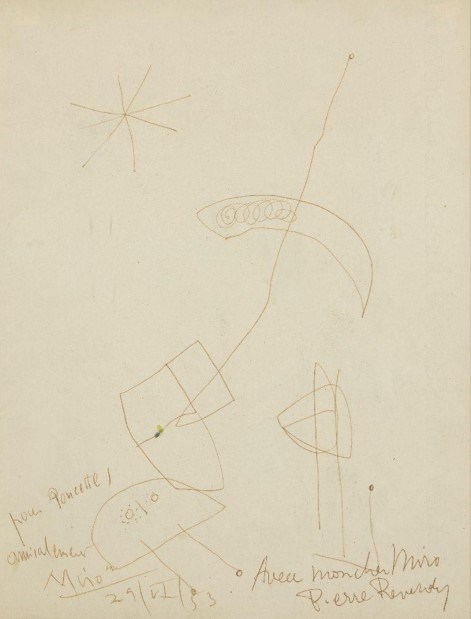 Six works of art by Spanish artist Joan Miro are included in the sale, ranging in styles and prices. The lowest estimate being £1,000 up to £8,000. The highlight amongst the collection is lot 197 titled ‘Saturnalian Insects [Dupin 746]’. The etching with aquatint in colours on Arches wove, signed and numbered 15/50 in pencil was printed at Morsang and published by Maeght, Paris.

Among the works by British artist on sale is lot 300 by Bridget Riley CH CBE. The English painter known for her singular op art paintings, is currently the leading lady on the London art scene. Ending in January this year, Hayward Gallery's major retrospective exhibition was devoted to the art of the celebrated artist and was the largest and most comprehensive exhibition of her work to date. Up for auction at Roseberys is a screenprint in colours on wove ‘From One to the Other [Karsten Schubert 61]’. The work which is published by the artist is signed, dated, titled and numbered and is estimated to make £4,000- £6,000.

The complete portfolio of twenty-two screenprints in colours on wove, lot 260 by British artist Patrick Caulfield CBE RA is estimated to sell for £4,000- £6,000. Also, on offer by the English painter and printmaker is lot 261 ‘Cigar’, 1978; screenprint in colours on wove. This artwork is entered into the sale at a lower estimate of £1,000- £1,500. Both prints on offer are a prime example of Caufield’s work, which incorporates elements of photorealism within a pared-down scene, in bold colours.

Lots 250 to 259 in the sale are by English pop art painter, sculptor and printmaker Joe Tilson. ‘Full of ideas and creation, Tilson is a very important member of the Pop Art movement, whose work is often undervalued on the art market’ - comments Head of Department, Shane Xu. The work on offer has estimates ranging from £300 - £1,500, lot 252 being a highlight from the collection titled ‘The Software Chat Questionnaire’. Created in 1968; the complete portfolio of six screenprints in colours, five on wove bound in ring binder folio with aluminium covers, one on silver foil loose as issued is in the original wood slip case.

Our final highlight comes from British artist Richard Wilson RA, estimated to make £1,000- £1,500. Lot 105, ‘Wind Instruments’ created in 1980 is a rare complete portfolio of seven self-assembly wood, wire and paper sculptures on trays of handmade paper produced by Georges Duchene at Couze. This lot comes with an accompanying photographic folio illustrating the completed ‘Wind Instrument sculptures’, within a cord bound chestnut box. This work was produced after the artist's first solo exhibition at the Coracle Press Galllery, London, in 1976. The portfolio is a series of constructible temporary sculptures which form a self-contained site-specific exhibition, reflecting Wilson's interest in volume, illusionary space and architecture. ‘This lot is a perfect example of the Prints & Multiples category, as an original form of art, it combines ideas, craftmanship, design, playfulness and academia, whilst crossing all kinds of genres’ - comments Head of the Department Shane Xu.