In recent years the market for Jewish artefacts has risen tenfold in value, which was reflected in Roseberys Private Collection of Silver & Judaica auction on Wednesday 17 March, that had an impressive 100% sell through rate, with many lots far exceeding their top estimates. Scrolls were the highlight of the sale, Sefer Torah Scrolls in particular, which made up the top four highest value lots on the day.

Peter Greenway, Director at Roseberys who managed the auction commented ‘We were elated with the results of the sale, which was one of the largest single owner collections of Judaica sold in the UK in the last few decades. The sale particularly proved popular due to the collections age, condition, provenance, craftmanship, historical significance and aesthetic value amongst a wide-ranging group of exclusive clienteles. It is extremely rare to have such an extensive collection of Judaica on offer in the UK, which in turn attracted a huge level of interest. Most of the objects bought in the sale left the UK, with an enormous number of internet and phone bidders competing throughout the auction from around the globe, from expected places such as New York, London and Tel Aviv to more surprising countries including China and Russia.’ 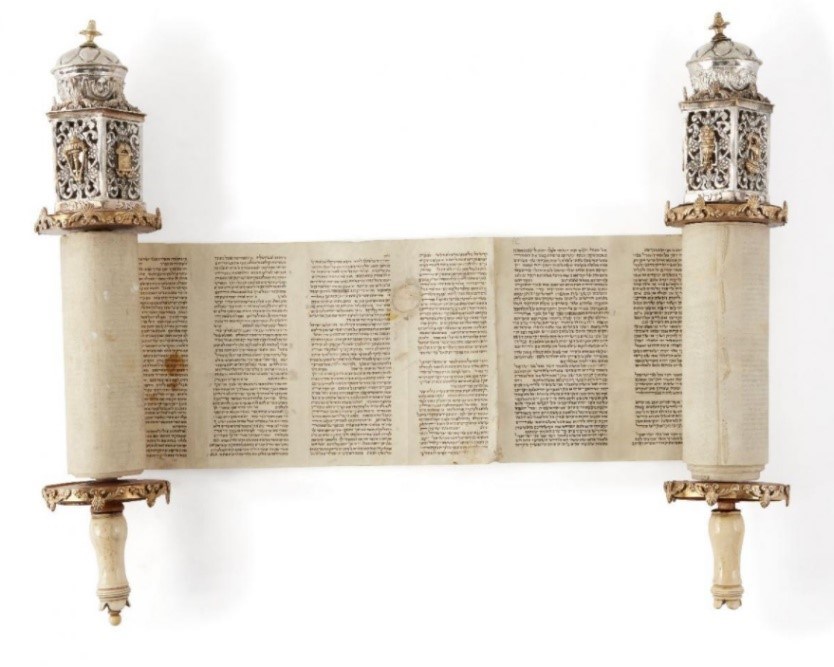 Far exceeding expectations and leading the sale was lot 313, a 19th century Italian Sefer Torah, on silver-mounted wood and bone rollers in an associated small 20th century arc, with a crimson velvet mantle. The five-sided parcel gilt silver mounts of the Sefer Torah were beautifully decorated with applied gilt motifs including a pair of priestly hands in blessing and a vase of flowers. The Sefer Torah contained an associated 20th century breakfront parcel gilt arc, that was chased with rococo decoration, columns, eagles, leaping stags and Hebrew lettering and surmounted by a crown with priestly hands in blessing flanked by rampant lions. Entered onto the market at £2,000 - £4,000, this lot far exceeded its top estimate to make £23,750, making it the highest value lot of the sale. 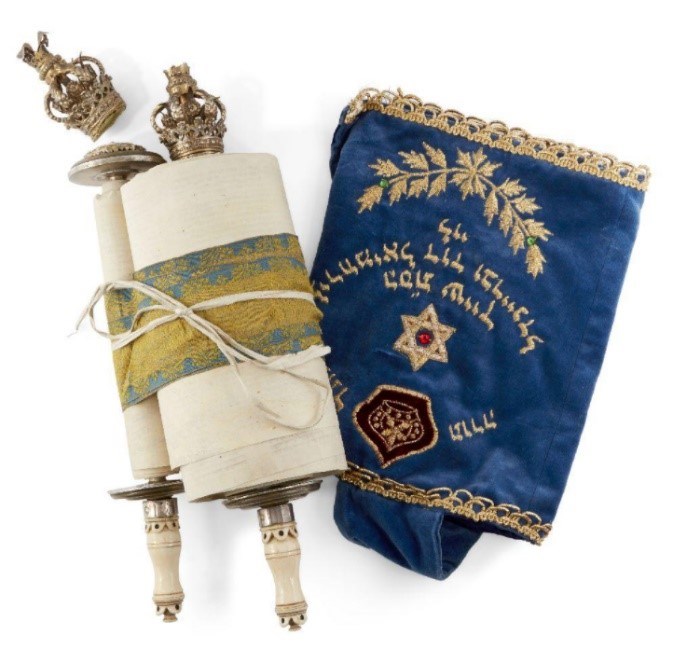 Entered onto the market at £3,000 - £5,000 was a another Sefer Torah, this one miniature and mounted on ivory tipped rollers with gilt crown finials, together with a blue velvet mantle embroidered in gold thread with a Star of David and crown. This Sefer Torah ended up making over double its estimate realising a price of £12,500. Georgina Agnew, the specialist working on the sale commented: ‘I believe the beautiful condition of this Sefer Torah was a factor in the outstanding sale result.’ 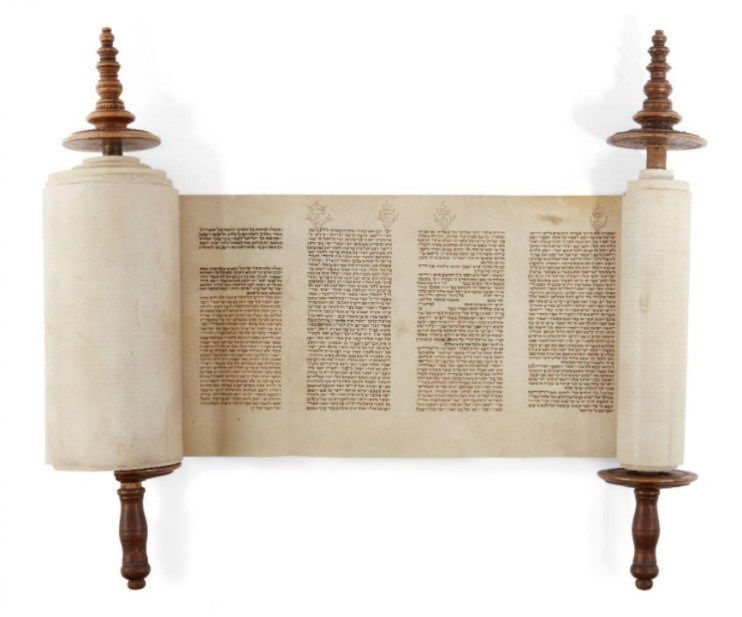 Another miniature Sefer Torah Scroll which was mounted on carved wooden rollers, in a blue velvet mantle, together with a pair of parcel gilt silver filigree Torah finials, which was estimated to make £2,000 - £4,000 realised the price of £8,125. The Sefer Torah Scroll is possibly of Austro-Hungarian origin, early 19th century and came with a provenance, purchased by the vendor at Sotheby's (Lot 36, Western Manuscripts and Miniatures, London, 2nd July 2013). 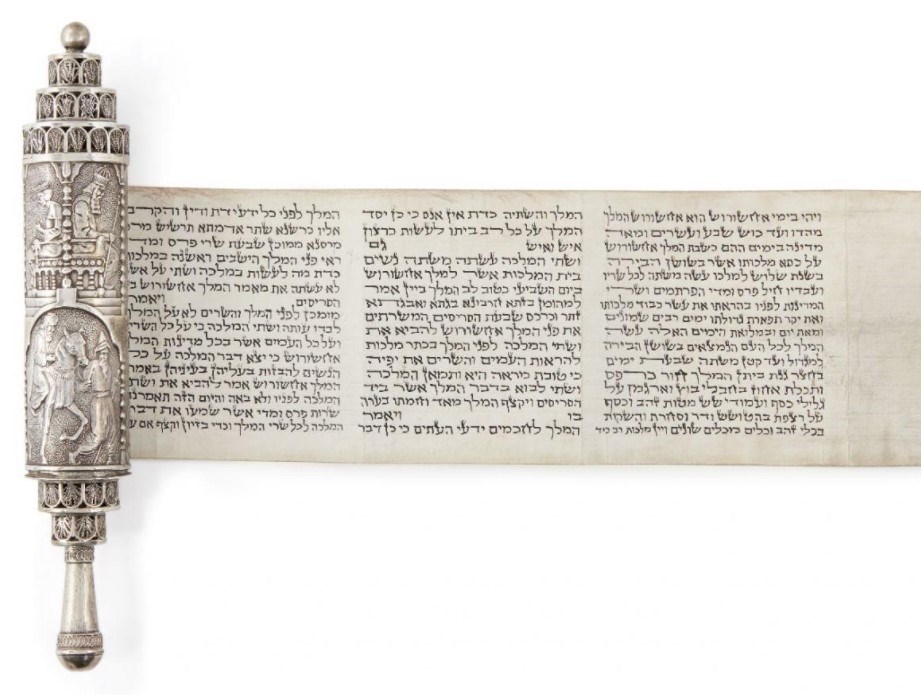 Another highlight in the sale estimated to sell for £1,000 - £2,000 was a HaMelech Esther scroll, megillah, in a silver case and original olive wood box, by the Bezalel School, Jerusalem, c.1925. The scroll that had a large pre-sale interest, ended up selling for £7,500. Pieces by the Bezalel School of Art and Design have become highly collectible over the years. Established in 1906 by artist Boris Schatz as the “Bezalel School of Arts and Crafts”, Bezalel has evolved into one of the world's most prestigious art schools.

Another item from by the Bezalel school in Jerusalem, that sold well was a silver filigree spice tower of architectural form, c.1920. Estimated at £2,000- £4,000, the spice tower went on to make £5,750 at auction. This highly collectable piece has five domed turrets and a flag engraved 'Jerusalem' in Hebrew to hinged cover, the square foot applied on one side with Hebrew words reading 'Bezalel Jerusalem' and stamped with an Austrian import mark for 1901-21. 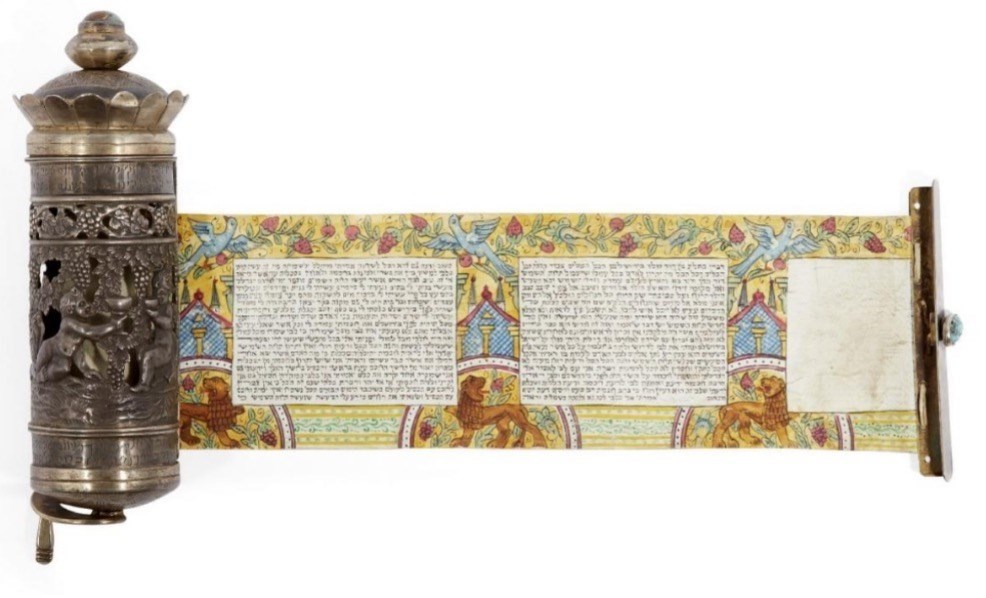 Elsewhere in the sale, lot 311, a miniature illuminated Megillat Kohelet [Book of Ecclesiastes Scroll], early 20th century, which was offered to the market at £2,000- £5,000, sold for £6,000. This scroll is written in a handsome Hebrew scribal hand in tiny lettering bordered by colourfully painted polychrome birds, fruit, lions within roundels and architecture on a yellow ground. Book of Ecclesiastes scrolls are far rarer than Esther scrolls, and the beautiful illumination on this example made it even more special. The good condition commensurate with age, without a doubt enhanced the popularity of this lot. 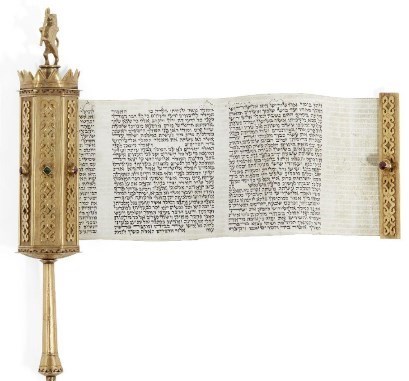 A fine example of a scroll case included within the auction was lot 312, which sold for £6,875. The small jewelled Israeli HaMelech Esther scroll case, unmarked, assumed gold, c.1960 is attributed to Licica Smilovici. The case of hexagonal form with panelled sides is lavishly decorated with vertical bands of geometric scrollwork set with rubies and emeralds, the crown finial centred by a rampant lion, greatly enhancing its aesthetic value. 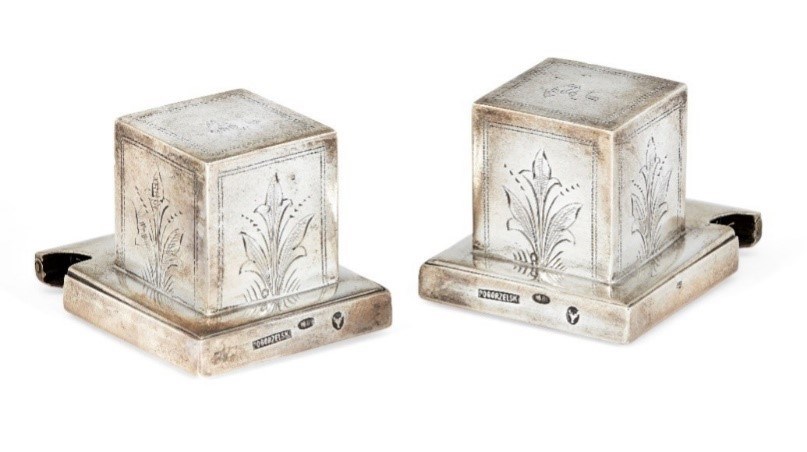 Offered with an estimate of £400- £600 was a pair of late 19th century Polish silver Tefillin cases (phylacteries) Warsaw, maker's mark Pogorzelski, which far exceeded the top estimate to make £3,500. These cases also have a later Russian duty mark for 1908-17, both engraved with foliate decoration and Hebrew inscriptions reading 'for hand' and 'for head' respectively to the front. They are exceptional examples of Tefillin’s, the silver boxes worn by Orthodox Jewish men on their head and arm during weekday morning prayer. The Tefillins’ also came complete with pale blue velvet linings. 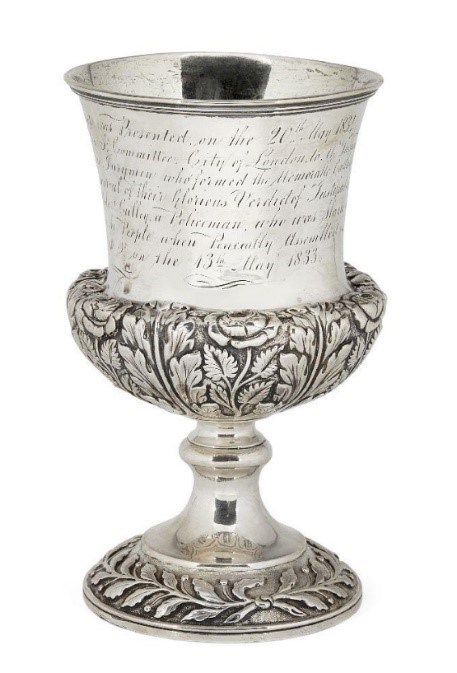 
Rounding up the highlights within the sale was an interesting William IV commemorative silver goblet, from London, c.1833 that came with a maker's mark TJ. Entered onto the market at £300 - £500 it went on to realise an outstanding price of £2,750. The goblet was chased with foliate and floral decoration and engraved with an inscription reading: This cup was presented on 20th May 1834 by the Milton St Committee, City of London, to Mr Thomas Pearson, one of the seventeen jurymen who formed the memorable Calthorpe St 'Inquest' as a perpetual memorial of their glorious verdict of 'Justifiable Homicide' on the body of Robert Culley, a policeman who was slain while brutally attacking the people when peacefully assembled on Calthorpe St on the 13th May 1833'. This unusual inscription could be notable for why the goblet reached the price it did.

Please find all the results from the auction here.

If you would like something valued for auction, we offer a compliementary valuation service. Please contact valuations@roseberys.co.uk with your details.