LONDON: Over 200 works by many household names in late 19th and 20th century design - from William De Morgan and René Lalique to Piero Fornasetti and John Makepeace – will be offered in Roseberys London’s latest Design: Decorative Arts 1860 to the Present Day sale.

The November 4 auction embraces decorative arts from Gothic Revival to the present day via the Aesthetic and Arts & Crafts Movements, the Art Nouveau and Art Deco periods, as well as Studio Ceramics and Modern Design of the post-war decades.

Fiona Baker, Head of Department comments: “Roseberys Design sale on the 4th November is a mixed period sale that includes glass, silver, ceramics, jewellery, metal wares, lighting, some pictures, carpets and furniture. Prices range from a £100 to £25,000 and there are two hundred lots to choose from. To name a few highlights, and starting with Arts & Crafts, we have four William De Morgan 'Galleon' tiles and a C.F.A. Voysey 'Donnemara' carpet. For the Art Nouveau period there is a small Louis Majorelle buffet and a pair of Hans Christiansen 'Night' and 'Day' vases. Art Deco is well represented and the star lot would be a Rene Lalique 'Victoire' car mascot. For those with an eye on Christmas presents there is a selection of Georg Jensen jewellery that may be tempting. Representing the best of Post-war British Design would be a fabulous pair of Gerald Benney silver and enamel covered jugs and a 'Spink' table by John Makepeace.”

Among the sale’s star lots is a pair of large silver gilt and enamel covered water jugs by Gerald Benney (1930-2008). Decorated with Benney’s distinctive ‘bark finish’ and bearing a mark for the notable master enameller Alan Alfred Evans, the pair carry hopes of £15,000-25,000. Benney was a British silver and goldsmith who continuously produced works for over 50 years, from private commissions to mass production. Along with David Mellor and Robert Welch, he was influenced by modern Scandinavian design, in particular Georg Jensen, and popularised stainless-steel designs in post-war British homes. In an obituary for the Independent newspaper, he was described as “one of the most outstanding and influential British goldsmiths of the second half of the 20th century” whose work has had a “major impact on the survival of domestic silver in Britain”. He was the first British craftsman to hold four Royal Warrants simultaneously  from HM The Queen, Queen Elizabeth The Queen Mother, the Duke of Edinburgh and the Prince of Wales. Famously, Benney devised a method of texturing silver with tiny striations, initially achieved by a bent hammer. This process eliminates tarnish and fingerprints and creates an attractive "bark finish" which became his signature. Benney's work can be seen in many collections worldwide, including those of the Victoria and Albert Museum and Goldsmiths' Company. [Lot 112] 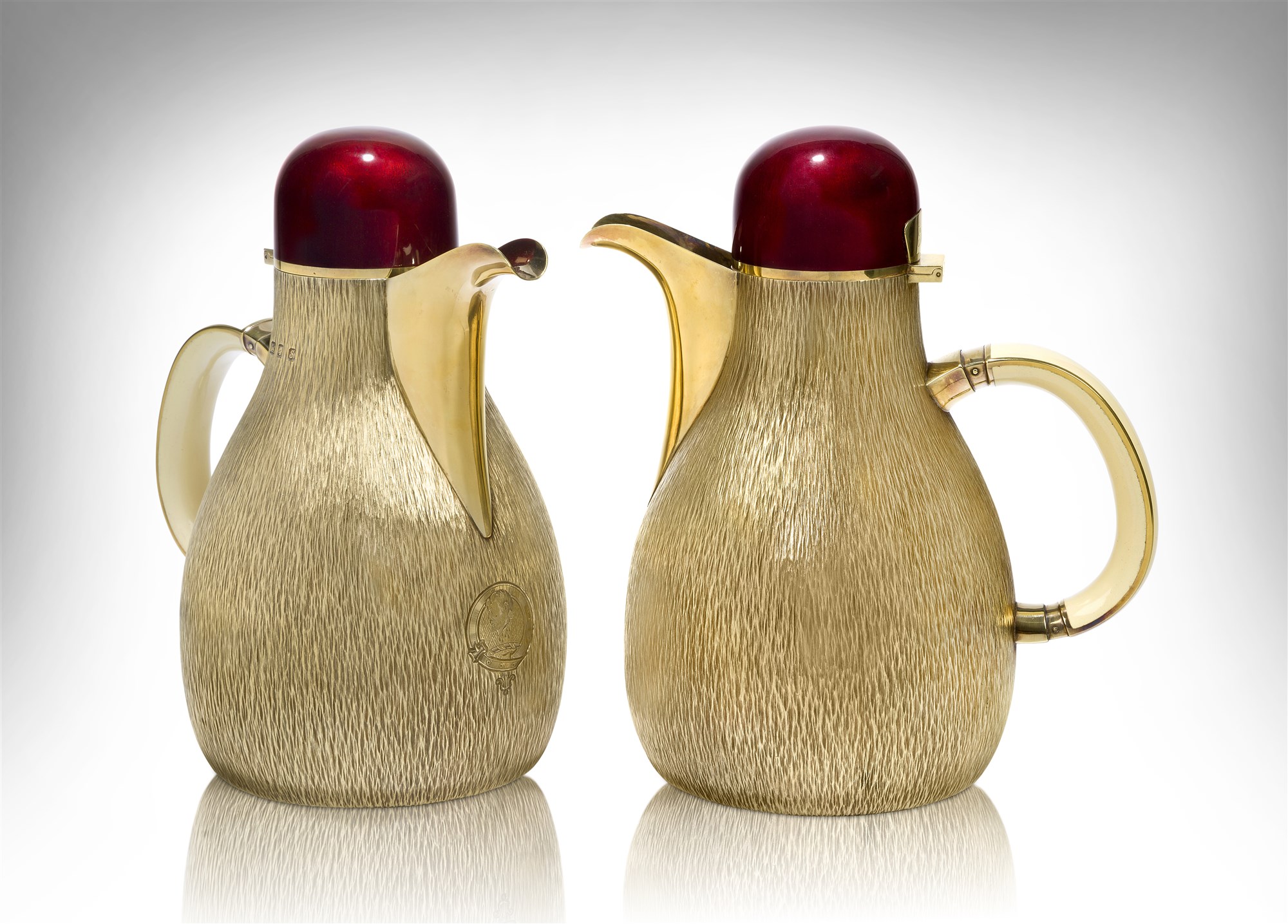 Continuing with the Post-war British Design theme is a Kingwood ‘Spink’ table designed by John Makepeace (b.1939) and made in his workshops in 1980, which is estimated at £2,000-3,000. Often hailed as the father of modern British furniture design, Makepeace is credited with reviving the art and craft of fine furniture making in late 20th century Britain. His early commercial work in the 1960s was sold by Heal’s, Liberty and Harrods, but in the mid-1970s he decided to scale down and concentrate on developing furniture-making into high art. [Lot 111]

As well as British pieces, the sale contains furniture designed by leading European designers. Among the best known was Piero Fornasetti (1913-1988), a versatile and eclectic Italian artist characterised by creative flair that made him one of the most prolific figures of the 20th century, and difficult to ascribe to a specific movement. A c.1950s magazine stand in the ‘Sole di Capri’ pattern, one of Fornasetti's most cherished and enduring patterns, is estimated at £800-1,200. [Lot 169 ] 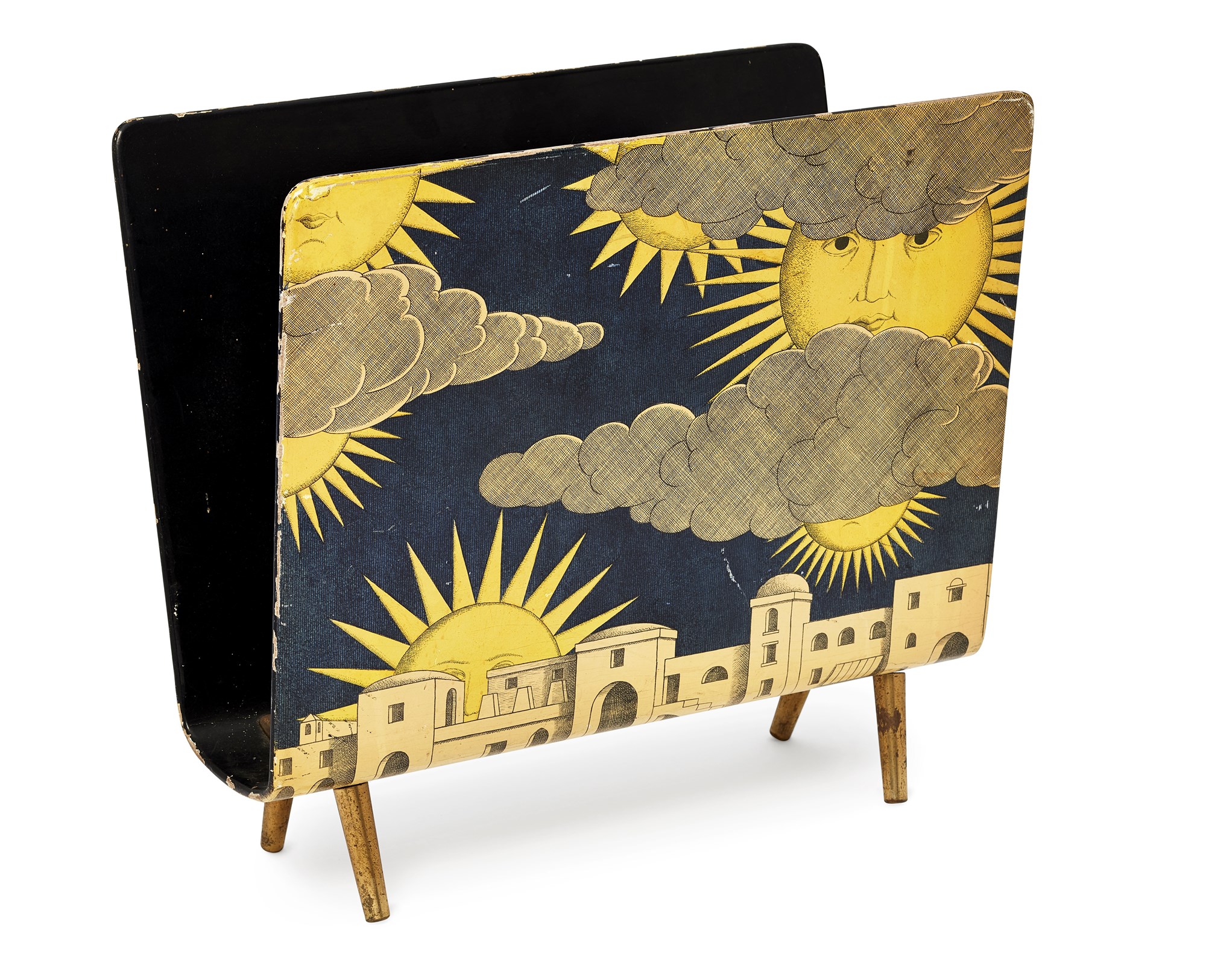 Yngve Ekström (1913-1988) was a Swedish furniture designer, wood carver, sculptor and architect and an important figure in the evolution of the Scandinavian Modernism movement. The sale contains a pair of Ekström’s 'Lamino' armchairs made in c.1950 for Swedese, the furniture manufacturer he co-founded. Of laminated teak and oak construction and upholstered in sheepskin, the chairs are estimated at £1,500-1,800. [Lot 184]

Elsewhere in the sale is a ‘Donnemara’ hand-knotted wool carpet by the great English architect and textile designer C. F. A. Voysey (1857-1941). Strongly influenced by William Morris and the Arts & Crafts movement, Voysey’s designs were well known in mainland Europe, and though popular with French Art Nouveau designers, his influence was felt more dramatically by the founders of the Modern Movement. This example, woven with a repeating pattern of stylised tulips, flowers and foliage in c.1905 for Irish firm Donegal Carpets, is guided at £3,000-4,000. [Lot 29]

Among other stand out design pieces is a c.1950's 'Metallux' five light pendant light for Rotaflex by husband and wife partnership John and Sylvia Reid. The piece has five orange and white enamelled and pierced cylindrical shades and carries hopes of £500-700. [Lot 145 ]

Studio pottery is well represented and includes a particularly fine example from the well-known English studio potter Rupert Spira (b. 1960). The c. early 21st century stoneware bowl with a bright yellow interior glaze is guided at £400-600. Spira’s ceramics can be found in many galleries throughout Britain including the V&A, as well as in a number of private and public collections worldwide. His earliest work was in the tradition of Bernard Leach in style, but changed from functional to more minimalistic when he subsequently set up his own pottery in Shropshire. [Lot 142]