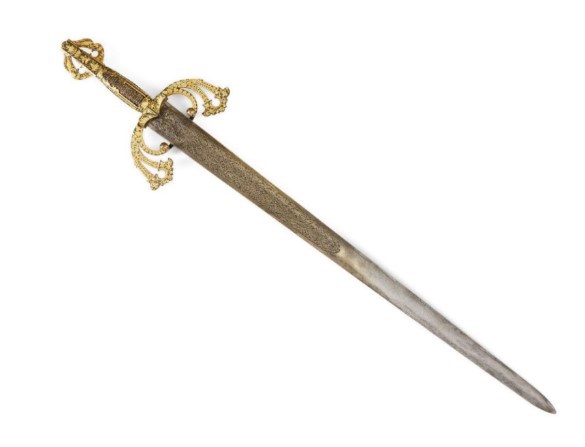 On Tuesday 26 October, starting at 10.30am, Roseberys are delighted to present the Islamic, Indian Art & Antiquities auction. This sale offers 557 lots, including metalwork, pottery, manuscripts and miniatures, glass, decorative arts, stonework, textiles, paintings and contemporary works of art, as well as antiquities. 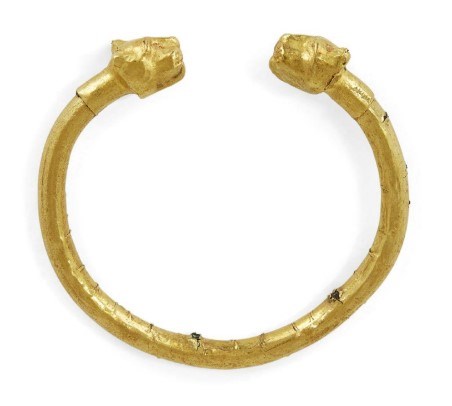 Alice Bailey, Head of the department comments: ‘The upcoming October 26th sale of Islamic, Indian Art & Antiquities comprises several private collections which the department is pleased to bring to the market. We have over 100 lots largely to be sold with no reserve from the Private Collection of Oliver Hoare (1945-2018).  The renown Islamic arts collector assembled a variety of weird and wonderful things in his long and distinguished career and we will be presenting objects ranging from a silver filigree bezoar stone and holder from 18th century North India to a Japanese signed carved wood skull from the Meiji-Taisho period and a group of medieval Spanish-Islamic belt buckles purchased directly from the Iranian sculptor Parviz Tanavoli. We will also be presenting manuscripts, calligraphies, paintings and works of art from an Important Private Collection. Amongst the highlights are two early 14th century leaves from a Zoroastrian apocalyptic text, a Safavid manuscript signed Baba Shah Isfahani, an early 16th century Mughal illustrated leaf from Firdawsi’s Shahnama, and a Safavid calligraphic panel signed Sultan Muhammad Nur (ca.1472-1536AD). We also are pleased to present a large group of early Islamic pottery, a number of stunning Susanis and early Islamic metalwork including an exceptionally fine openwork Seljuq bronze incense burner in the form of a bird dating to the 12th century. From a private Danish collection, the bird is a considerably larger version of one present in the Metropolitan Museum of Art, New York. Rounding off the sale are a group of fine Indian paintings, attributable to Chajju and Harkhu, and Sikh paintings.’ 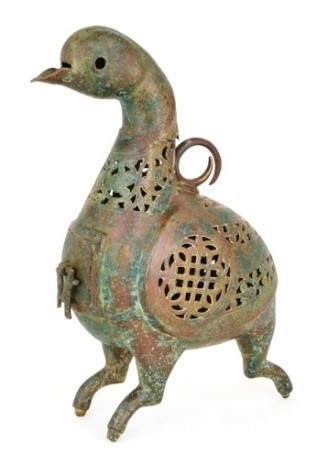 Lot 307 is a is a magnificent and rare incense burner that was bequeathed to the present owner from a Private Danish Collection. Made in Northeast Iran in the late 12th-early 13th century it is a larger example of a similar bird incense burner in the Metropolitan Museum of Art, New York.  Incense was widely used in the medieval Islamic world. At receptions and special events, servants would waft the guests with the aromatic smoke emanating from the openwork of the incense burner and sprinkle them with drops of scented water. This bird‑shaped incense burner represents a class of metalwork that would have been sold to the wealthy elite. Birds figure prominently in the decorative repertoire of the Seljuq period, and were probably associated with good fortune. Measuring 33.2cm. high and 20.4cm. long, this incense burner comes with an estimate of £20,000- £30,000. 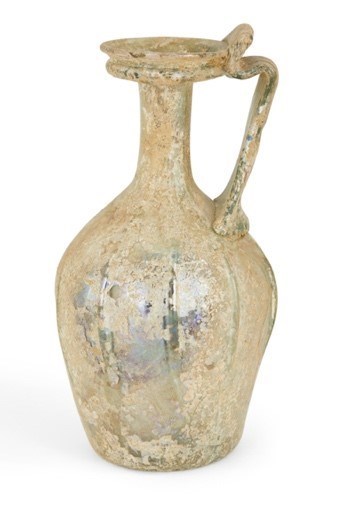 (Lot 42) A Roman clear glass ewer, circa 1st-2nd century AD., the base with indented foot, globular ribbed body leading to a narrow neck widening at the rim, with a thick applied handle bending inwards at the rim, measuring 15.5cm, comes with an estimate of £1,200- £1,800. This intact pale blue bowl still has the old Bluett and Sons Ltd label to base and comes with a good provenance from a private family collection in the 1970s.

Entered onto the mark with an estimate of £800- £1,200 is lot 18, an Egyptian wood boatsman, measuring 16.5cm high, from the Middle Kingdom, circa 1800B.C. The Egyptian gesso painted wood kneeling boatman, has a fantastic provenance as it includes the 1934 business card of Nicolas Tano Antiquities store which sold the work to the vendor’s family. 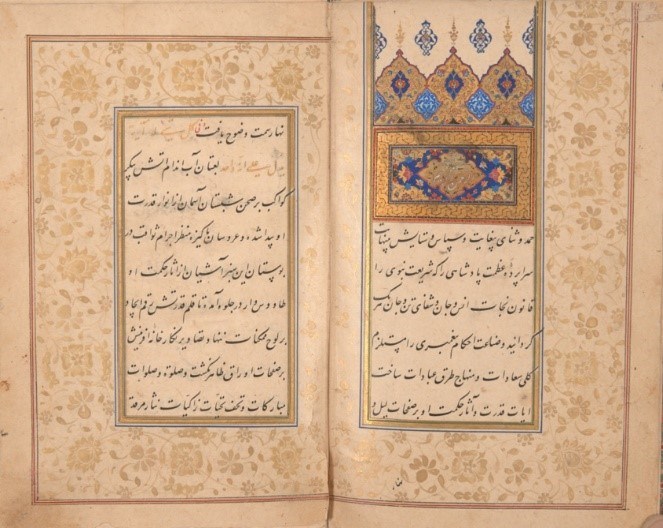 Coming with an estimate of £500- £700, this manuscript (lot 95) is one of several from an important private collection in the sale. It is signed Baba Shah Isfahani (d. 1587-88AD) and dates to the second half of the 16th century. Not many works by this famous calligrapher are known to have survived and those that do are in private libraries and museums. The Persian manuscript is on polished paper, and contains 23 leaves plus 8 fluy-leaves, 9 lines to the page written in black elegant nasta’liq, ruled in gold, black and blue, the outer margins with interlacing gold scrolls, important words in red and blue, f.1b with gold and polychrome heading. It is bound with a brown leather binding with gilt stamped medallions and comes with its associated cotton bag. 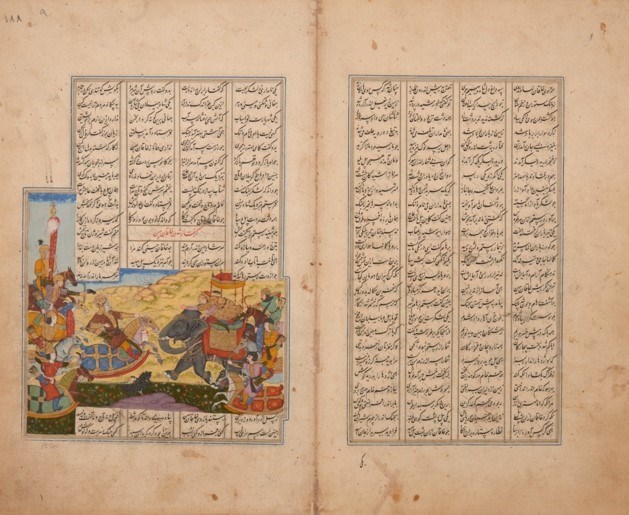 Property from an Important Private Collection An illustrated leaf from Firdawsi’ Shahnama: Rustam drags the Khaqan of China from his elephant, Mughal India, late 16th century

This late 16th century illustrated folio from Firdawsi’s Shahnama (lot 128) depicts Rustam dragging the Khanaq of China from his elephant. Other leaves from this same copy of the Shahnameh were sold at Christies in 2016. It also comes from the property from an important private collection and has the pre-sale guided price of £1,500- £2,500. 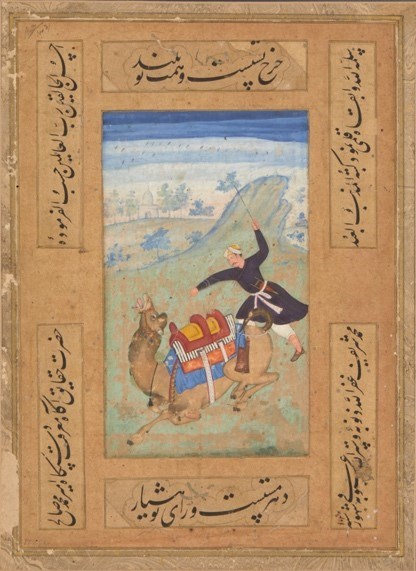 Property from an Important Private Collection A painting of a camel and its rider, Mughal India, 17th century

(Lot 115) A 17th century Mughal painting from an important private collection is also included in the highlights offered within the auction. The lively scene of a camel and rider framed by nastaliq inscriptions, one of which is signed Muhammed Sharif and dated 1028AD/1618-19AD comes with an estimate of £3,000- £4,000. 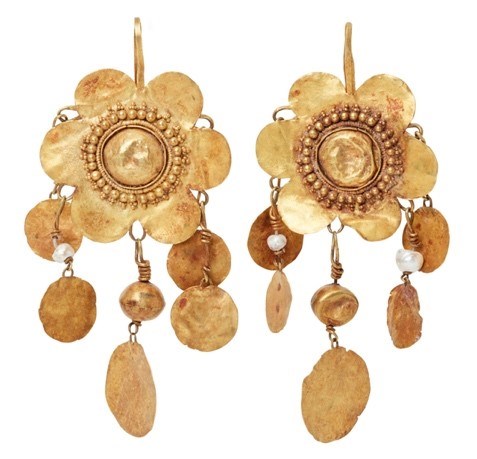 A pair of seed pearl and gold flower pendant earrings


Included within the jewellery section of the sale is (Lot 196) a pair of seed pearl and gold flower pendant earrings in the ancient style, 6.9cm. long, 12 grams. This pair of earrings that come with an estimate of £400- £600 come from the private collection Oliver Hoare (1945-2018); bought from the Piasa Auction House 17 December 2002.

These three medieval buckle elements (Lot 199) also come from the private collection of the renown Islamic art dealer Oliver Hoare (1945-2018). They were purchased directly from Iranian sculptor Parviz Tanavoli in 1989. The three silver gilt buckle elements, hailing from Iran or Islamic Spain, 14th century, each of rectangular form with pointed end and three attachment holes, depict a lion his tail terminating in a palmette seated within an arch, one with hoop attachment and another with loop and circular element with gilt decorated bird. This collection comes with an estimate of £300 - £500. 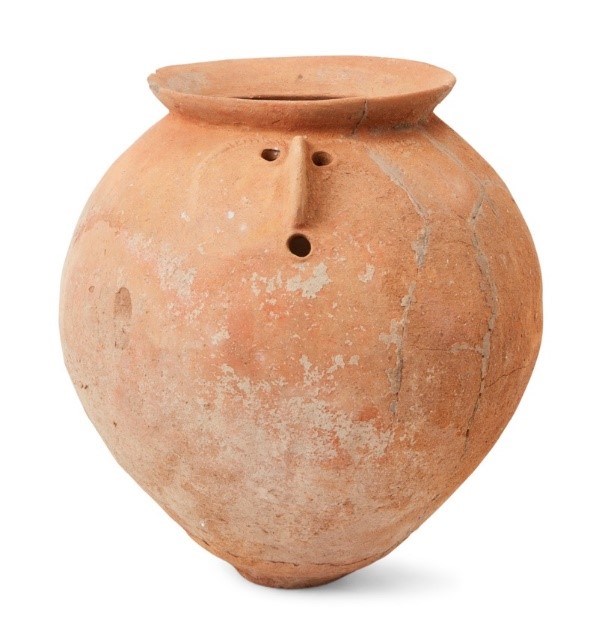 (Lot 229) Another highlight and amusing item coming from Oliver Hoare’s collection is this fun Roman pottery globular face-urn with everted rim. Made in circa 2nd Century A.D. and measuring 40cm. high, this urn has an estimate of £300- £500.

Among the textile items offered within this sale is lot 397. Coming with a pre-sale guided price of £1,000- £1,500 is a susani, Samarkand, Central Asia, 19th century. The ground of natural linen embroidered in couched silks with a field and border of large magenta flower roundels, each worked with pointed petals in soft red tones and encircled in a leafy sea-green wreath measuring 209 x 164cm. 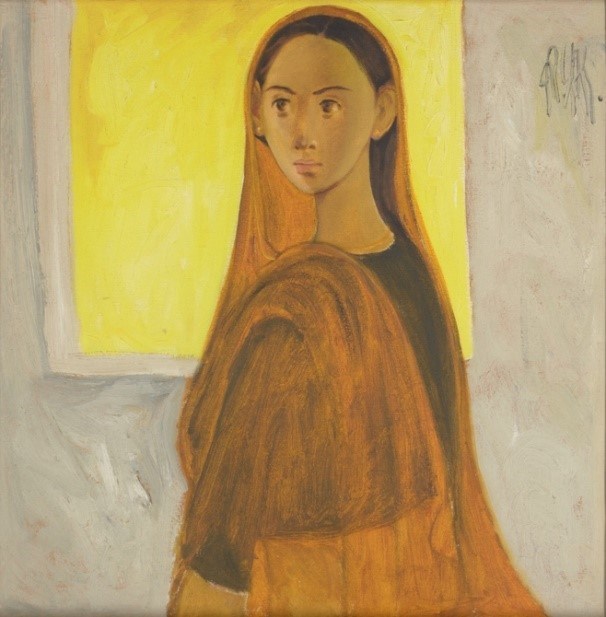 A more contemporary artwork on offer within the auction is lot 548 by Indian artist B Prabha (1933-2001). Untitled, the oil on canvas, signed to upper right, measuring 50x50cm, in glazed frame has a provenance from Bonhams New Bond Street, Islamic & Indian Art, 6th April auction in 2006. The works of Prabha detail the lives of rural women, exploring an array of related subjects alluding to identity, gender equality and society. Practicing art in a time when women were unapologetically oppressed, Prabha used her position as an artist to make strong statements, and is quoted stating that her aim was 'to paint the trauma and tragedy of women.' As a young artist, Prabha moved to Mumbai and studied at the Sir J.J. School of Art. In her lifetime, she showed work in more than 50 exhibitions in India and abroad. In 1956, she had her first exhibition with her husband, B. Vithal, and won first prize at the Maharashtra State Art Exhibition in 1958. She died in September, 2001. This work on offer comes with an estimate of £6,000- £8,000.


Viewing by appointment only contact islamic@roseberys.co.uk to book a time slot