The story behind Loetz Glass 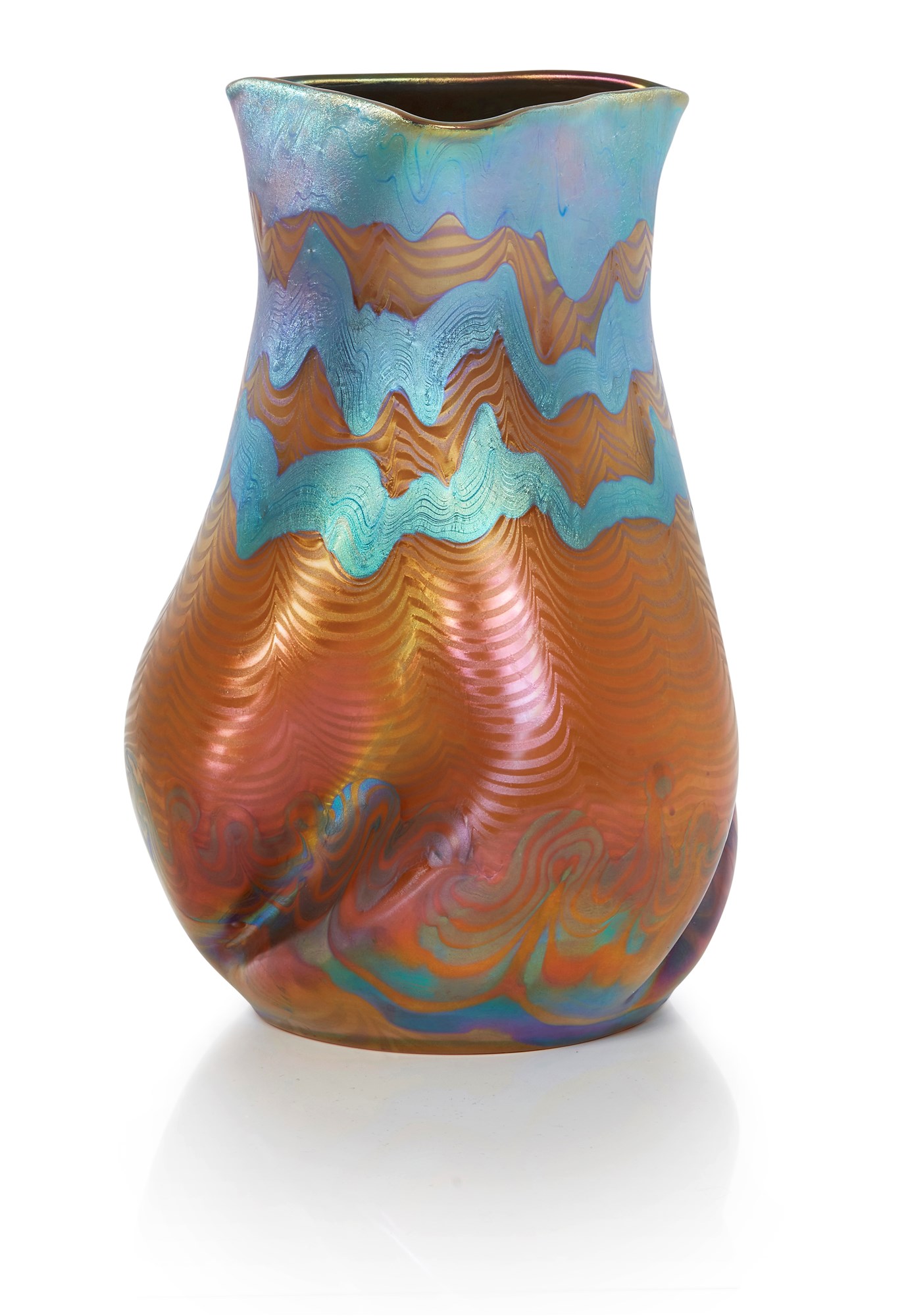 Loetz (Austrian), an iridescent Phaenomen glass vase, c.1902, PG 85/5032 up for sale in the Design: Decorative Arts 1860 to the present-day sale on the Tuesday 12th October auction at Roseberys

On offer at Roseberys upcoming Design: Decorative Arts 1860 to the present-day sale on the Tuesday 12th October is a dazzling extensive collection of twenty-seven lots of Loetz iridescent glass from a Private Collection. The collection was begun in the 1960s and a few of the items were bought from some notable dealers of decorative arts including John Jesse, Martins Forrest and John and Joan Collins. The collection shows the diversity and skill of Loetz and the beauty of iridescent glass. Roseberys is delighted to offer the collection in its Autumn sale. 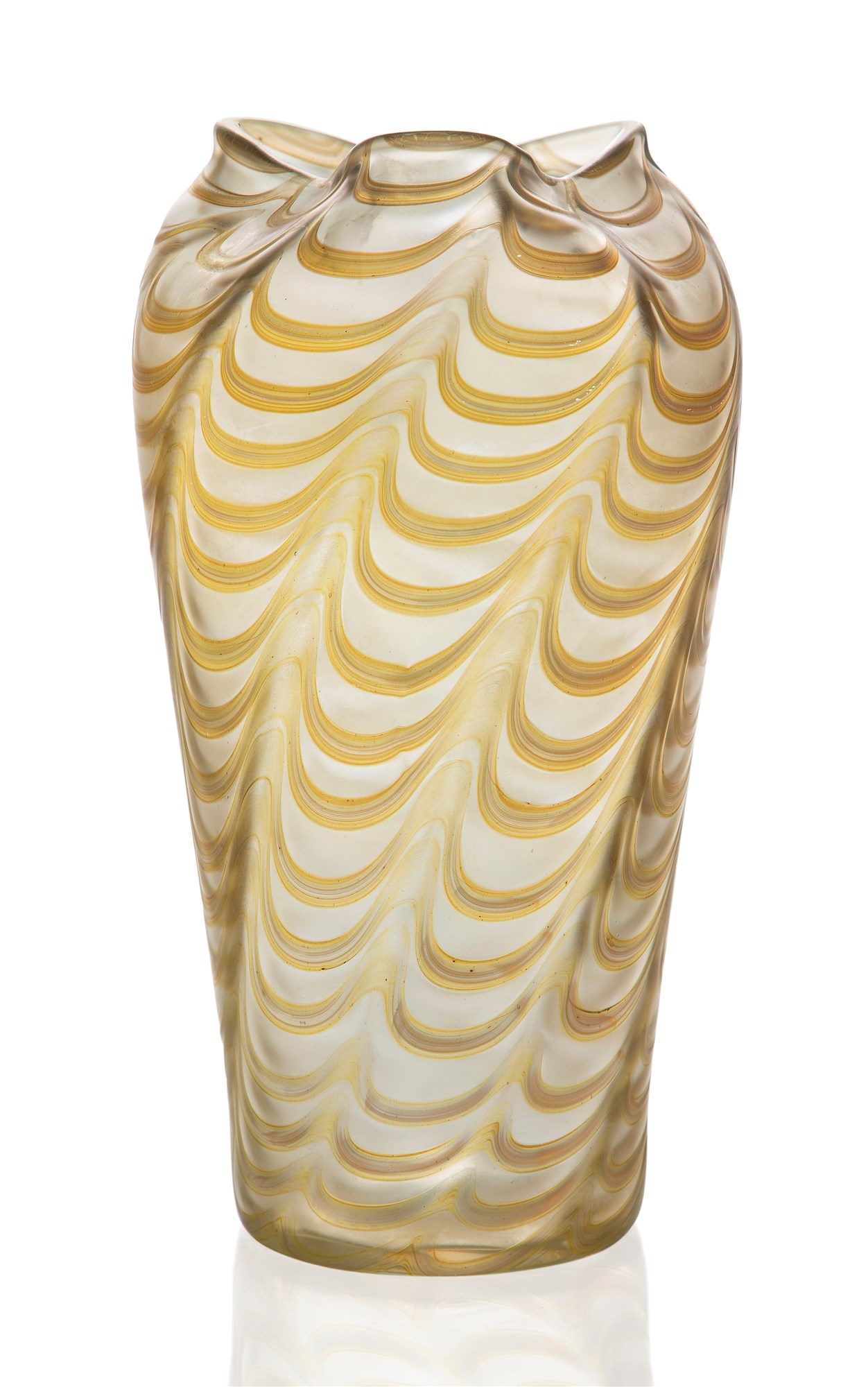 Loetz (Austrian), an iridescent glass vase with unidentified decoration, c.1925 up for sale in the Design: Decorative Arts 1860 to the present-day sale on the Tuesday 12th October auction at Roseberys

Here we explore the story behind the dazzling works of art from Bohemia’s most famous glassworks.

Loetz was the premier Bohemian art glass manufacturer during the Art Nouveau period (or Jugendstil, as it is called in German) from around 1890 to 1920. Johann Lötz Witwe was a Bohemian (currently Czech Republic) glassworks company founded by Johann Eisner in 1836, in the Sothern Bohemian town of Klostermühle, today part of the Czech Republic and called Klášterský Mlýn. After it was established, the company soon became known for its organic forms, ground-breaking techniques and daring use of colour. Johann Eisner’s heirs sold the glassworks to Martin Schmid in 1849, two years later Schmid sold it to Frank Gerstner, and his wife Susanne. Susanne was the widow (‘Witwe’ in German) of Johann Loetz. Loetz was a glassmaker, whom not many people know a lot about – but the name has been in harmony with the brand to this day. Gerstner handed over the business fully to Susanne shortly before his death in 1855. She successfully led and grew the business during the next 20 years of her tenure. In 1879, Susanne handed over the business – now called ‘Johann Loetz Witwe’ – to Maximilian von Spaun, her grandson. One year later, von Spaun hired Eduard Prochaska, a technical specialist who was instrumental in modernising the glassworks and installing two Sibert gas furnaces with eleven melting pots each. Together they introduced new, patented techniques and processes. This development meant that by 1889 Loetz was established as one of the leading glassmakers in Europe. 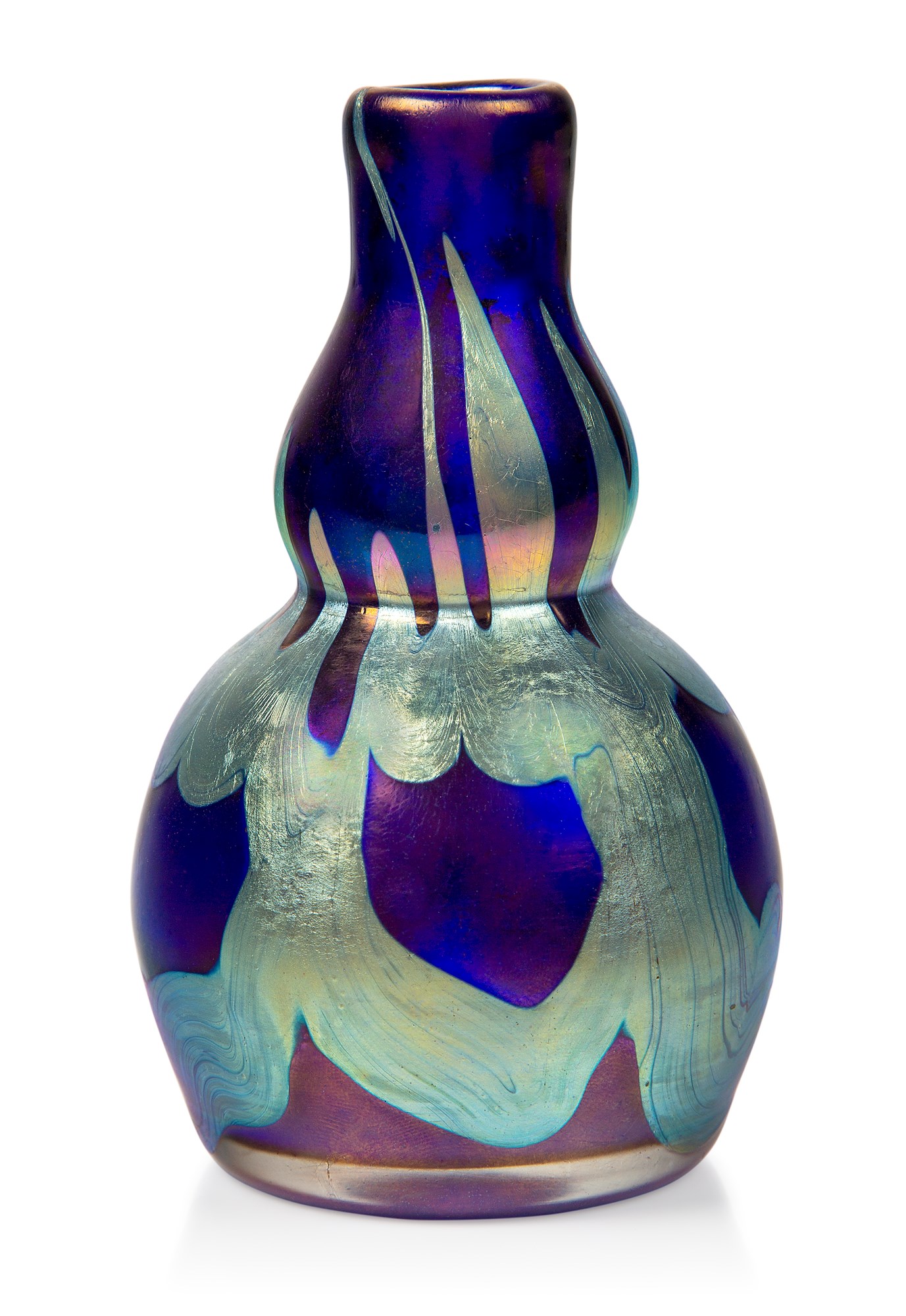 Loetz (Austrian), an iridescent Phaenomen double-gourd glass vase, 1899, pattern number PN 1/8050 up for sale in the Design: Decorative Arts 1860 to the present-day sale on the Tuesday 12th October auction at Roseberys

The next eight years were to be the most artistically significant and profitable for the business. In the year of 1889, the company took first prize at the Paris Exhibition for its classic vase forms inspired by nature such as seashells and flowers. Decorative vases, cups, and pitchers were other popular forms in the Loetz oeuvre of this time. The Loetz glassworks glowed due to their iconic iridescent shine from the firing and reduction techniques that were popular at the time – especially among Art Nouveau items. 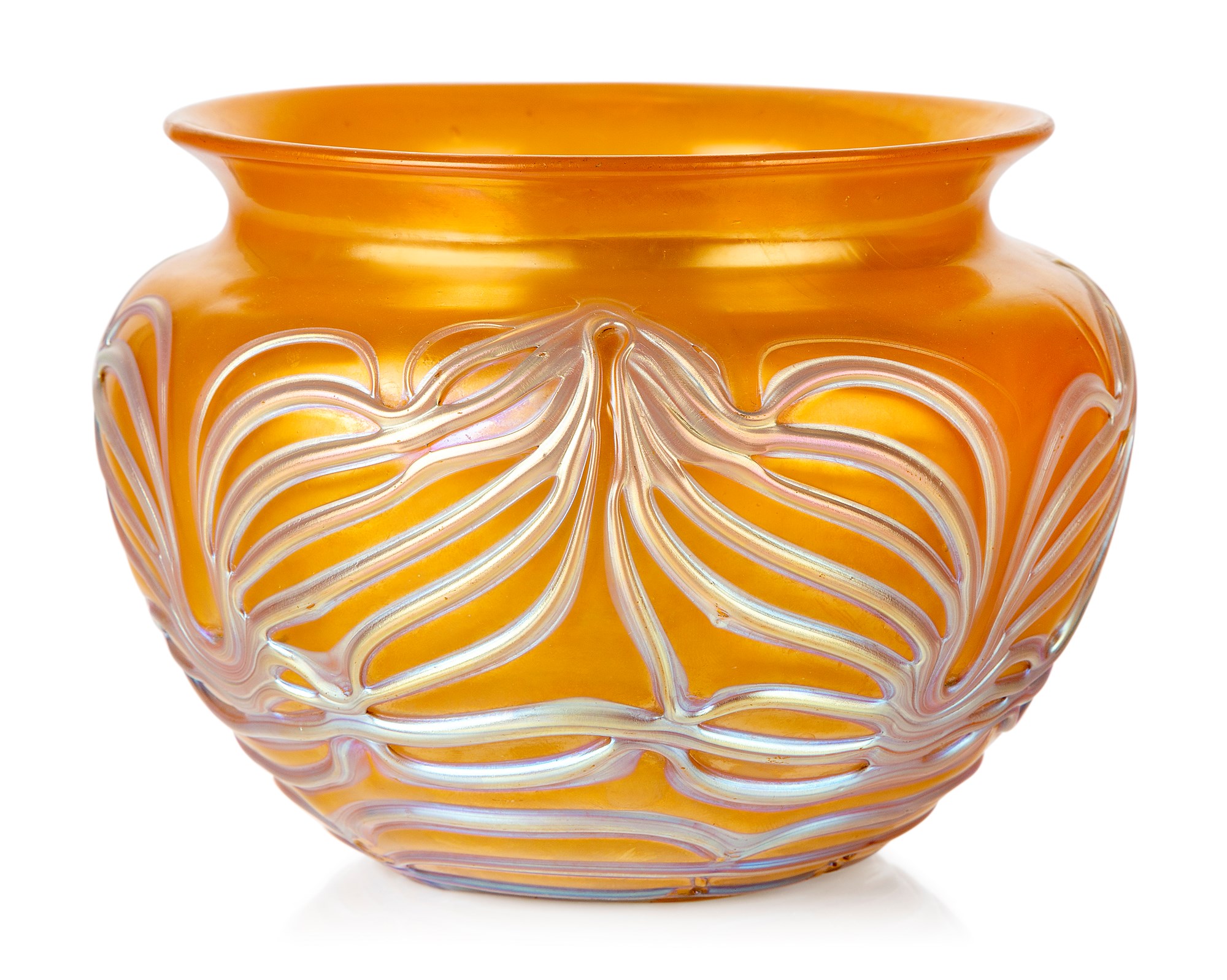 Loetz (Austrian), an iridescent glass bowl with unidentified relief decoration, c.1905 up for sale in the Design: Decorative Arts 1860 to the present-day sale on the Tuesday 12th October auction at Roseberys

One of the most stunning and collectible Loetz designs from this time period is called Phänomen. The Phänomen can be identified by its rippled or featherlike designs on the object’s surface. This effect was achieved using very hot molten glass and wrapping hot glass threads around a hot base. Pulling the threads on the surface created waves and many other designs. All of this work was completed whilst the glass was still pliable. The company patented the Phänomen technique in 1898 and used it in combination with techniques pioneered by L.C. Tiffany in the US, Tiffany’s iridescent Favrile work in particular. These design techniques provided plenty of inspiration for Loetz designers and artisans, including E. Prochaska, Franz Hofstötter, and Koloman Moser. Another popular design for the brand was the Streifen und Flecken (stripes and spots). Loetz also participated in the popular revival of late 19th-century cameo glass, which had been pioneered by Émile Gallé. The luxury form of glass art is produced by cameo glass engraving or etching and carving through fused layers of differently coloured glass to produce designs, usually with white opaque glass figures and motifs on a dark-coloured background. 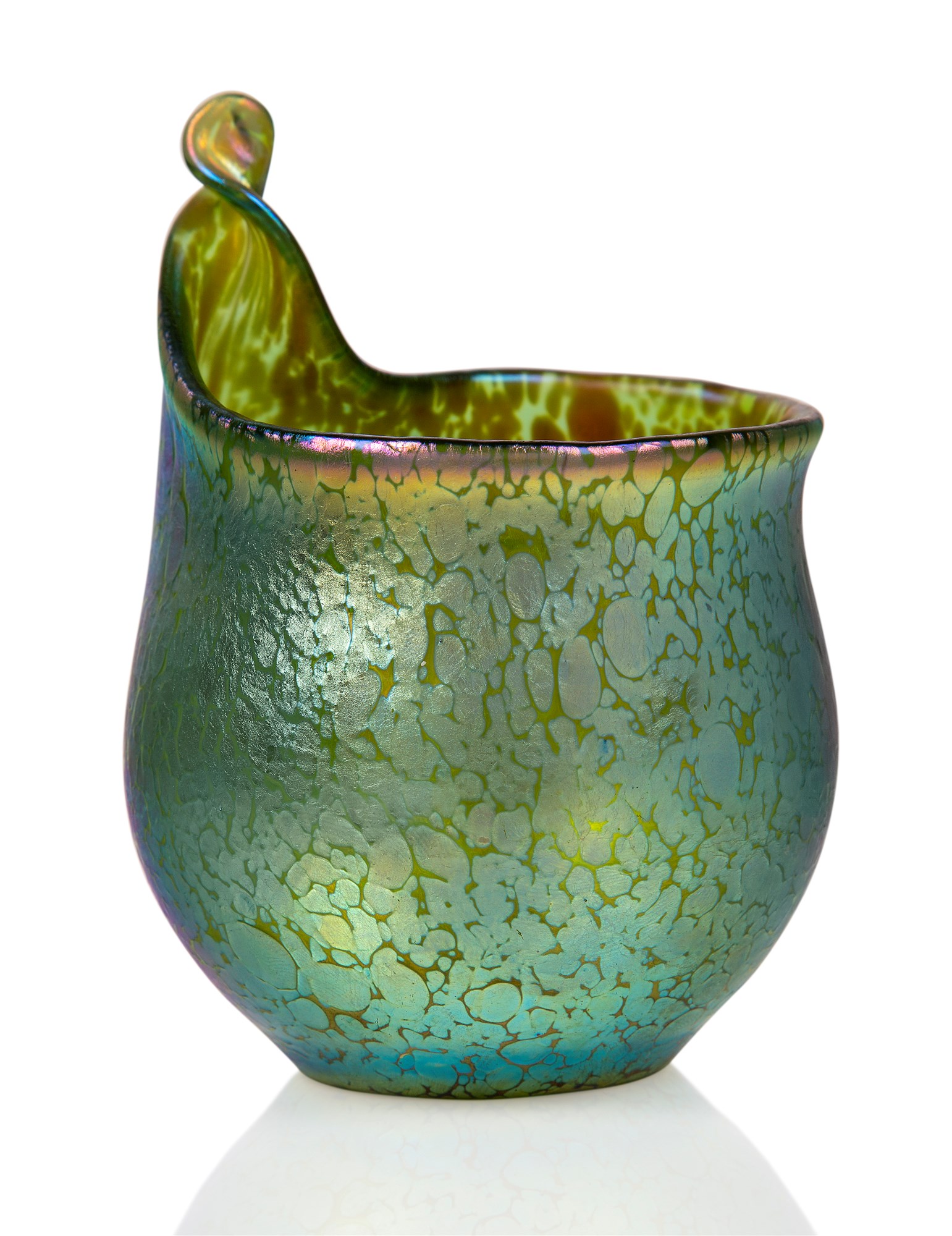 Loetz (Austrian), an iridescent glass ‘Papillon’ vase with handkerchief point rim, c.1900 up for sale in the Design: Decorative Arts 1860 to the present-day sale on the Tuesday 12th October auction at Roseberys

Despite gaining another award in 1904, a Grand Prix at the St. Louis World’s Fair, sales started to slow down. New artistic innovations were needed, so Loetz Witwe collaborated with Viennese designers such as Leopold Bauer, Otto Prutscher and Josef Hoffmann. In 1909, the company appointed Adolf Beckert, a specialist for etched decoration - as its new artistic director. In the same year, the popular von Spaun stepped down and transferred management of the glassworks business to his son, Maximilian Robert. 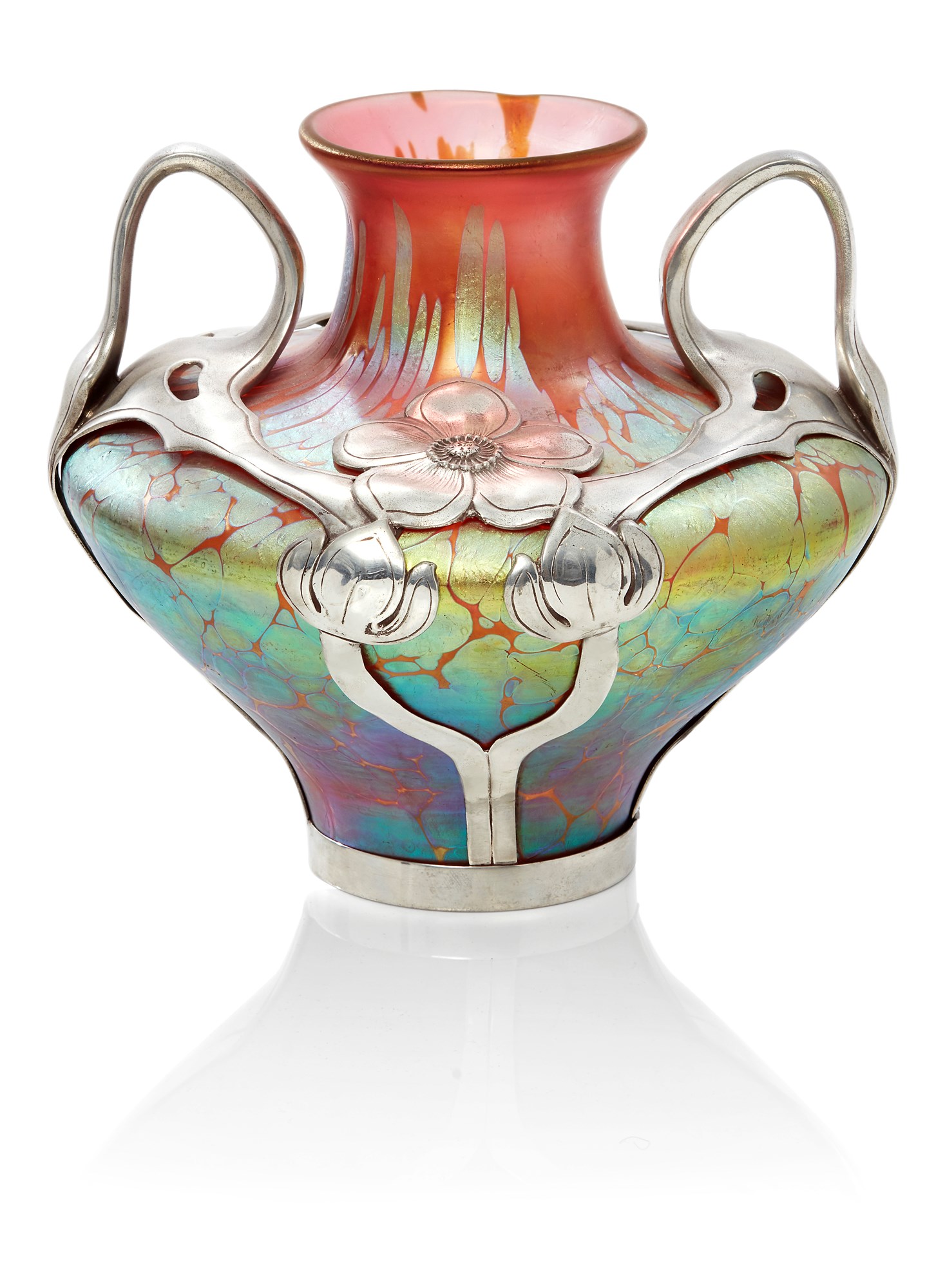 Loetz (Austrian), an iridescent pink Phaenomen glass vase with polished pewter mounts by Van Hauten, c.1900 up for sale in the Design: Decorative Arts 1860 to the present-day sale on the Tuesday 12th October auction at Roseberys

However, Maximilian Robert did not manage the glasswork business as well as his father, and ran into financial problems, which cultivated in Loetz Witwe declaring bankruptcy in 1911. Loans from the von Spaun family and with the help from specialist Prochaska meant that the glassworks could stay open. The etched designs by Hoffmann, Hans Bolek and Carl Witzmann helped the business further, however sales dropped again when Beckert departed in 1913. The new etched designs plus newly introduced Tango glass were shown at the Deutsche Werkbund exhibtion in 1914. The Tango series consisted of two-toned pieces created in single colours with simple surfaces and contrasting lip wraps or handles. Designer, Michael Powolny created some of their best Tangos. 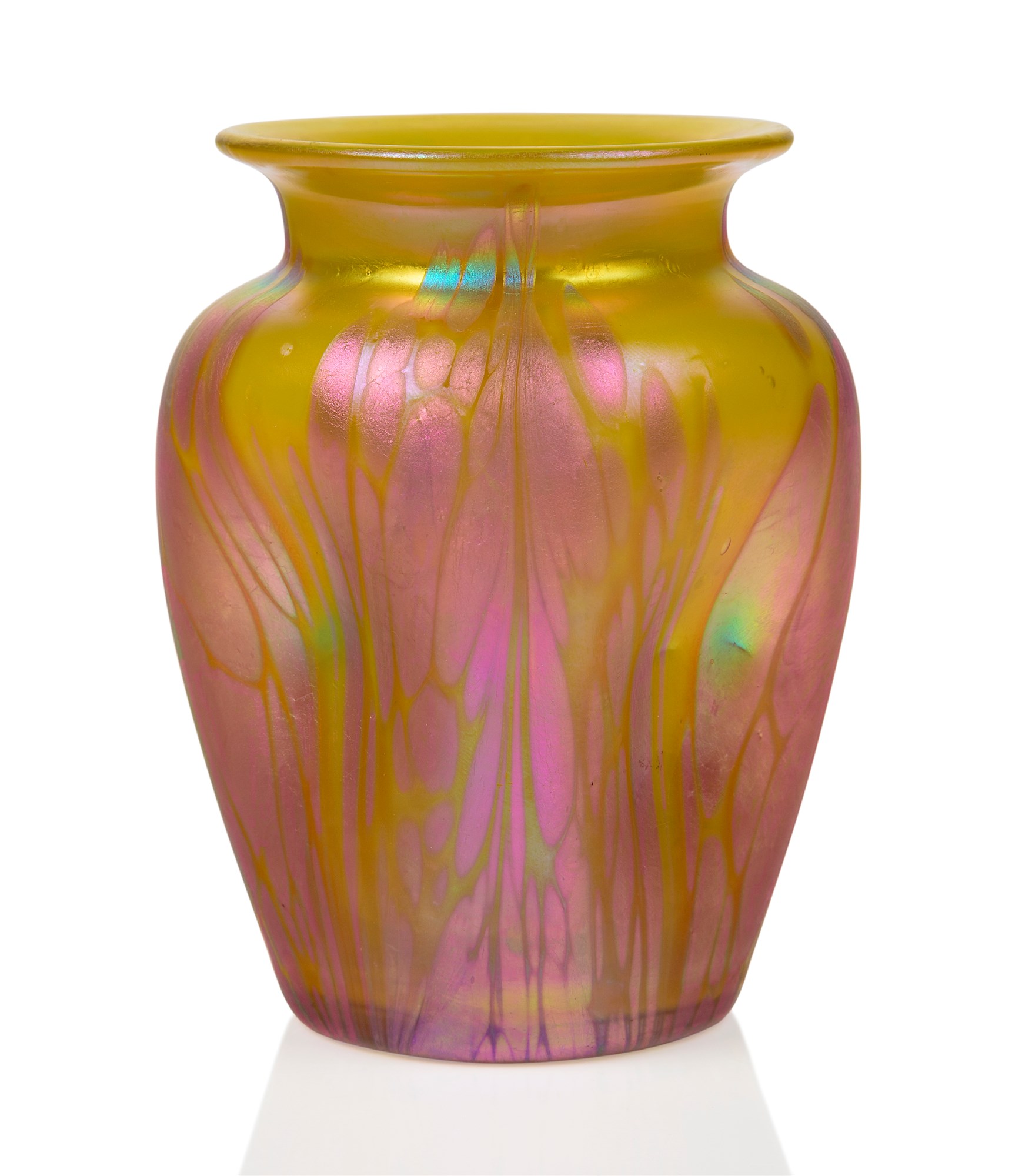 Sadly by 1939 the company was running out of money and in 1940 the factory burned to the ground. The fall of the Austro-Hungarian Empire and the coming of World War II led to the company’s demise in 1947.

Today, glassworks made at the Johann Lötz Witwe factory can be found in the collections of Prague Art and Design, the Victoria and Albert Museum in London, and the Heinrich Glass Museum in Düsseldorf, among others.