The highlights of a spectacular two-day Asian Art auction 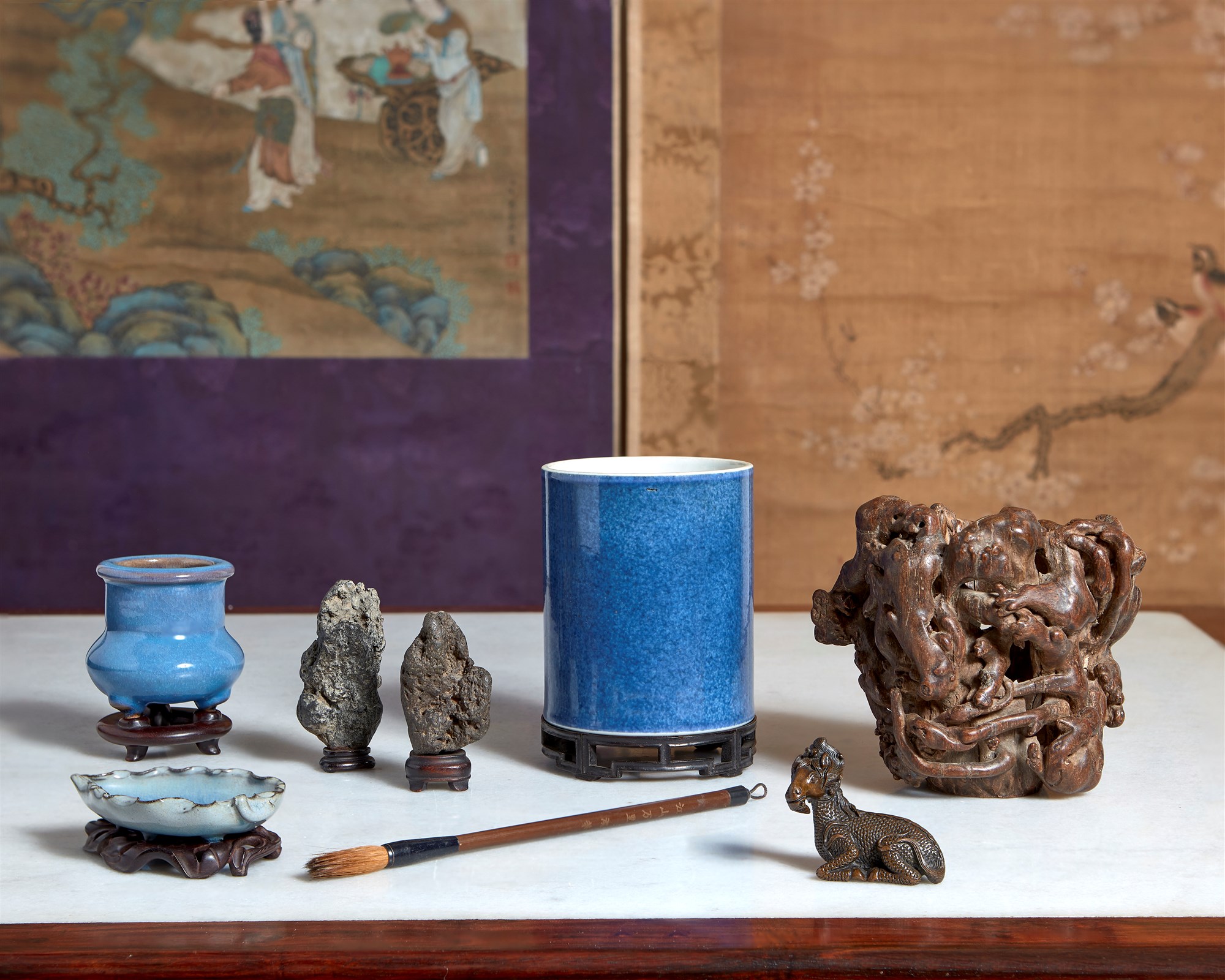 Roseberys are delighted to present the first Chinese, Japanese & South East Asian Art auction of the year to the market this May. The popular sale will run across two days. Day one (lots 1-437) will include: Fine Chinese Art, South East Asian Works of Art and Japanese Works of Art, taking place on Tuesday 17 May. Day two (lots 438 – 785) will include: Chinese Ceramics & Works of Art, taking place on Wednesday 18 May. Once again, we will be officially participating in the prestigious internationally renowned Asian Art in London again.

Bill Forrest, Head of the department comments: ‘This May we have the privilege of offering several imperial works of art, all from different private collections, in a variety of media.  In a market in which it is increasingly difficult to find such works still in private hands, the forthcoming offering of objects from the imperial workshops is remarkable.’ 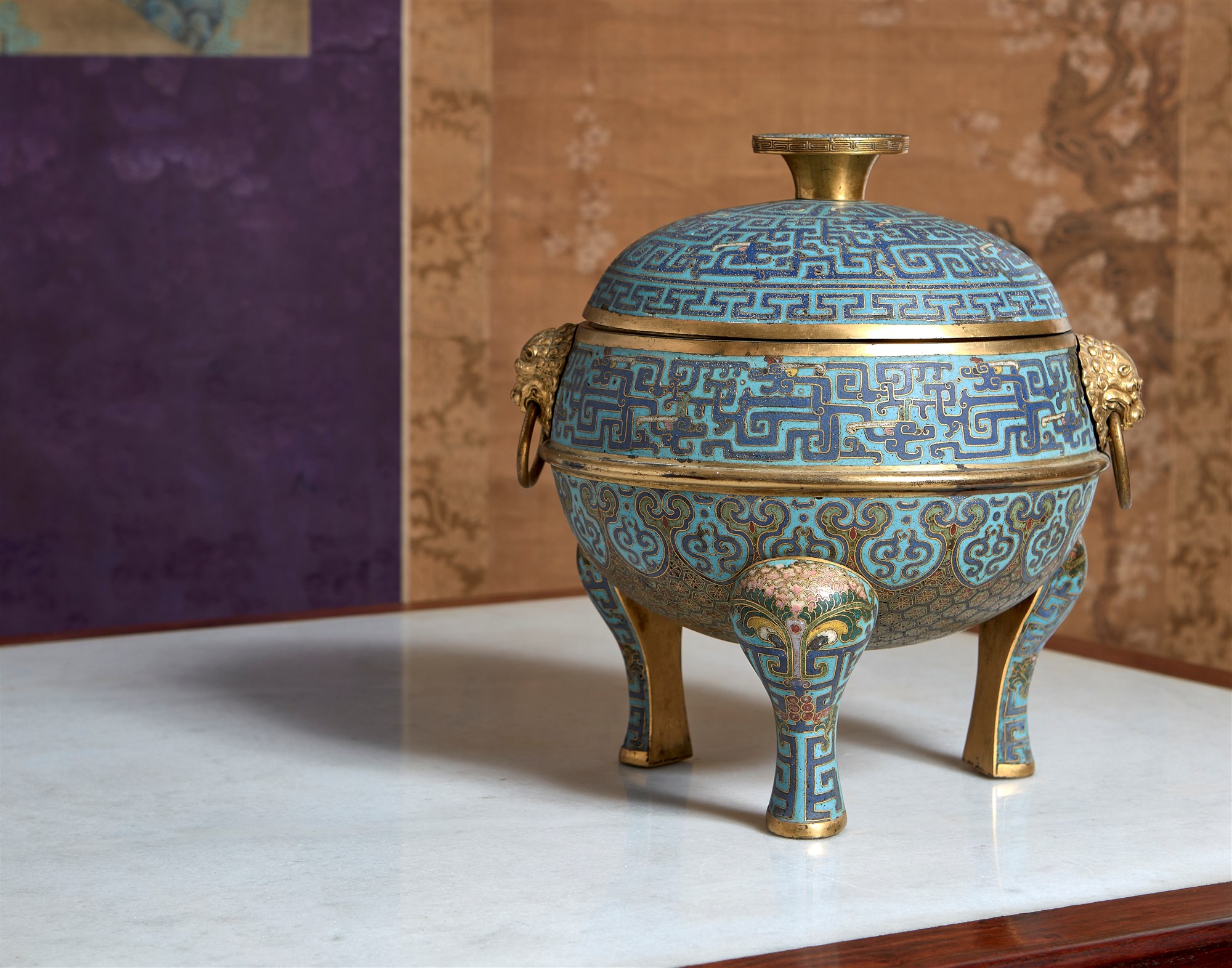 Leading the sale from a Private European Collection, Hong Kong, 2013, is lot 59, a rare Chinese Imperial archaistic cloisonné enamel and gilt bronze ritual vessel, ding, Qianlong period. The domed cover with flared knop is decorated with a continuous design of kui dragons. The base is decorated with a band of interlocking kui dragons set with two cast gilt bronze Buddhist lion mask and loose ring handles above a gilt bronze ridge. The underside is decorated with a band of ruyi lappets above a hexagonal floral diaper ground and raised on three feet decorated with pink chrysanthemum blooms issuing from a taotie. Bill Forrest comments : ‘The quality and size of this archaistic vessel strongly implies that it was produced in the Imperial workshops for use in Qianlong’s palace complex.’  This astonishing vessel, measuring  29cm high x 27cm in diameter, comes with an estimate of £6,000-£8,000. 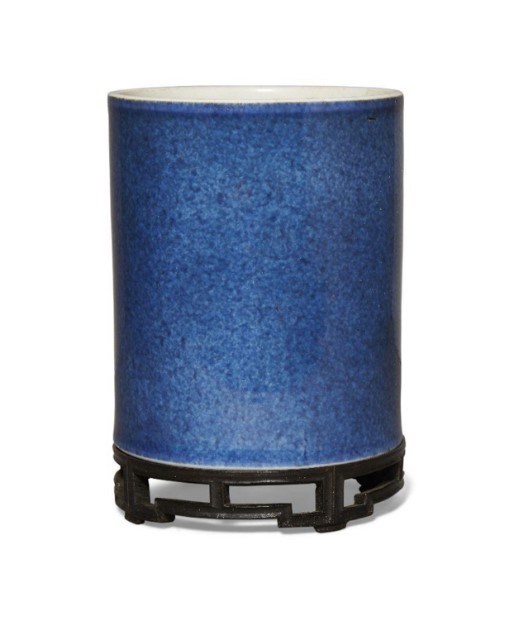 Lot 22 : Given the estimated appraisal price guide of £2,000-3,000 is a Chinese porcelain monochrome brush pot made during the Kangxi period. The brush pot that is decorated in a fine powder blue has the interior glazed white, and sits upon a fitted carved wood stand, accompanied by a fitted silk-lined box.  It comes with provenance from a Private collection, acquired in Hong Kong, in 1954. 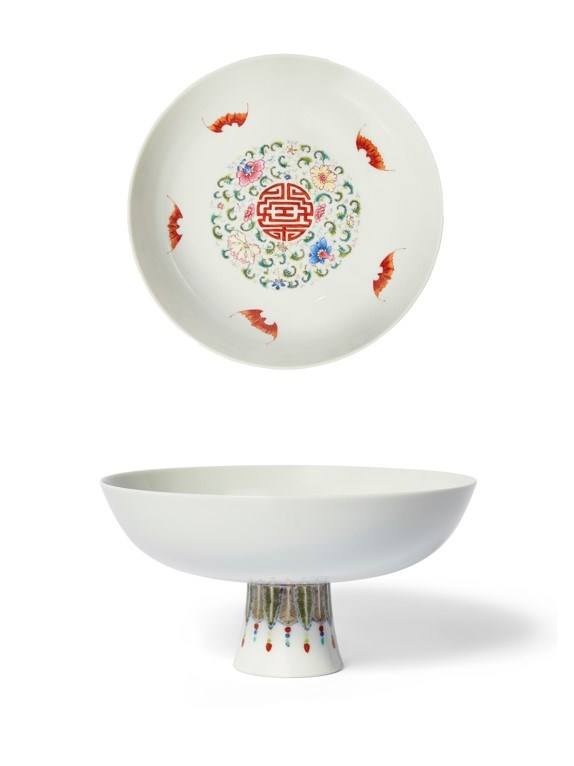 Lot 35 on offer is a fine quality Chinese porcelain famille rose 'flowers and wufu' tazza, Qianlong mark and of the period. The shallow bowl surmounting a slightly flaring elongated foot is decorated to the interior with a painted shou character enclosed by a band of flowering blossom amidst scrolling leafy stems and iron-red wufu around the cavetto. The underside includes radiating iron-red ruyi-head lappets, above a border of pendent green and yellow plantain leaves suspending beaded tassels. Underglaze is a blue six-character Qianlong seal mark on the interior of the foot. The tazza which measures 17cm in diameter and 8.8cm high comes with an estimate of £8,000-12,000. A similar example can be found in the Qing Court Collection, Palace Museum, Beijing. 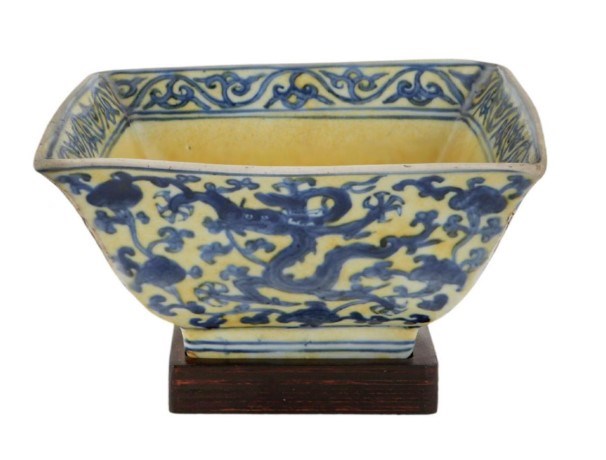 Lot 37, a Chinese porcelain underglaze blue and yellow enamel square bowl, Jiajing mark and of the period has been entered onto the market with a pre-sale price guide of £800-£1,000. Bill Forrest comments: ‘During the Ming dynasty, from as early as the reign of Emperor Xuande, yellow enamel ground blue and white porcelains were quite popular and produced in fairly large numbers.  Typically circular dishes decorated with flowers were produced, so it is quite rare to find a piece of square form, painted with imperial five-clawed dragons.’ 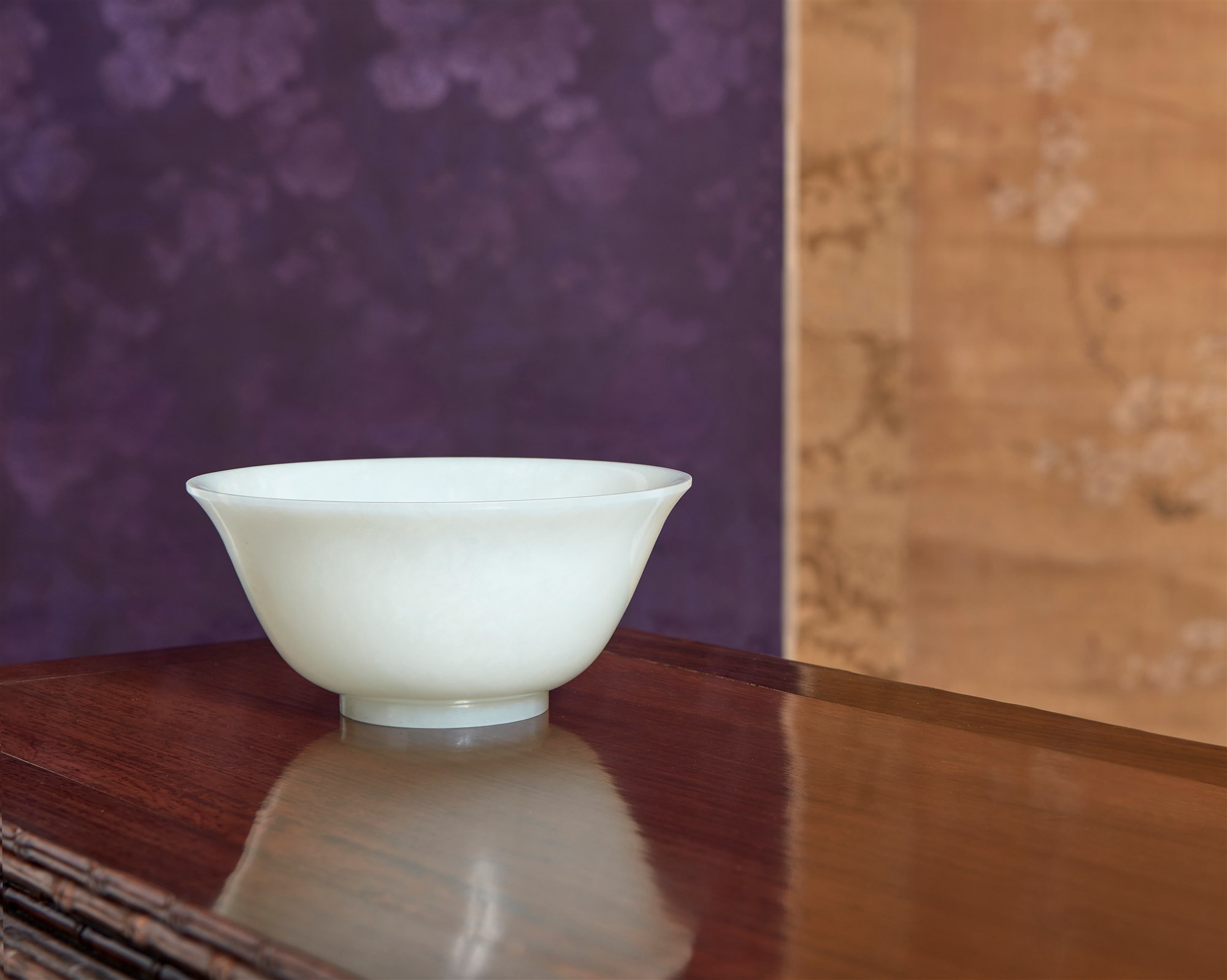 Lot 49: A rare and fine Chinese white jade bowl, hailing from the Qianlong period, comes with an estimate of £6,000-8,000. Bill Forrest comments: ‘The simple design of this bowl highlights the beauty of the jade material, with thin walls showcasing the translucent quality and even tone of the stone. Before ascending to the throne as the Qianlong emperor, the Prince Hongli wrote a fu extolling the virtues of jade - for embodying the Confucian virtues of benevolence, loyalty, wisdom, courage, and moral purity, and also as a metaphor for the scholarly gentleman, an identity the emperor fancied for himself. There are also several poems written by the Qianlong emperor written earlier in his reign, bemoaning the scarcity of high-quality jade. Following the conquest of Khotan and the brutal suppression of the Dzungar people in the late 1750s, the Qing empire acquired access to larger, and higher-quality, jade boulders, widening the scope of what could be created in the imperial workshops. Under the reign of the Qianlong emperor, jade objects were not solely used for decoration in the imperial households, but also as objects to be used in daily life. According to the Qing court archives, the annual imperial banquet held on the first day of the fifth lunar month would employ the use of jade during the ceremonies, with each dish being served on white jade platters.’ 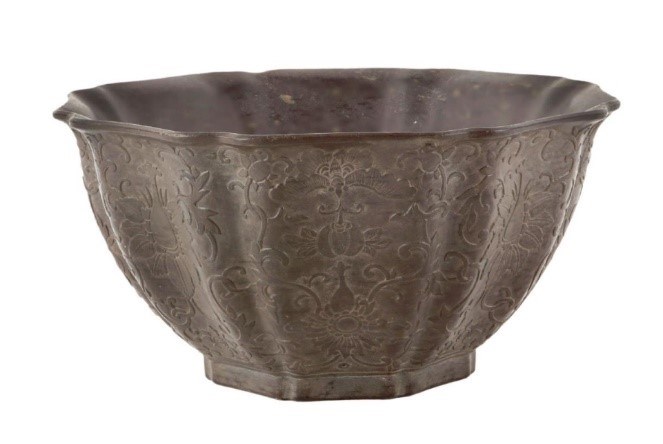 Lot 50: A rare Chinese carved duan stone 'lotus and butterflies' bowl, Daoguang mark and of the period is estimated to make £1,000-£1,500. Duan stone is a material typically used for scholar’s table screens and ink stones.  So it is extremely rare to find a bowl carved entirely from one piece of stone, and rarer still to find the reign mark of Emperor Daoguang to the base. This bowl comes with provenance acquired in Hong Kong, 1954. 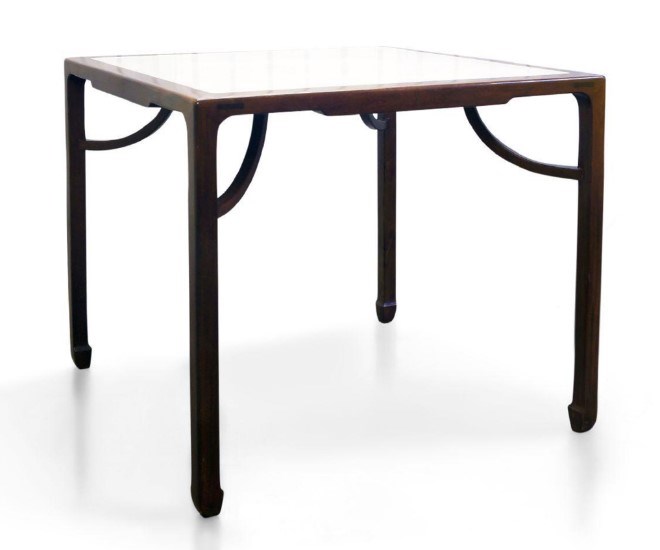 Lot 80 is a superb quality huanghuali wood table with classical ‘giant’s arm’ braces to the underside. The highlight furniture item on offer within the sale is set to the top with a large one-piece white marble panel, and was made in the late Qing/Republic period. The table that measures 76cm high x 88cm wide come with provenance from the Collection of the late Sir David Tang. This table has been given the estimate of £2,000-4,000. 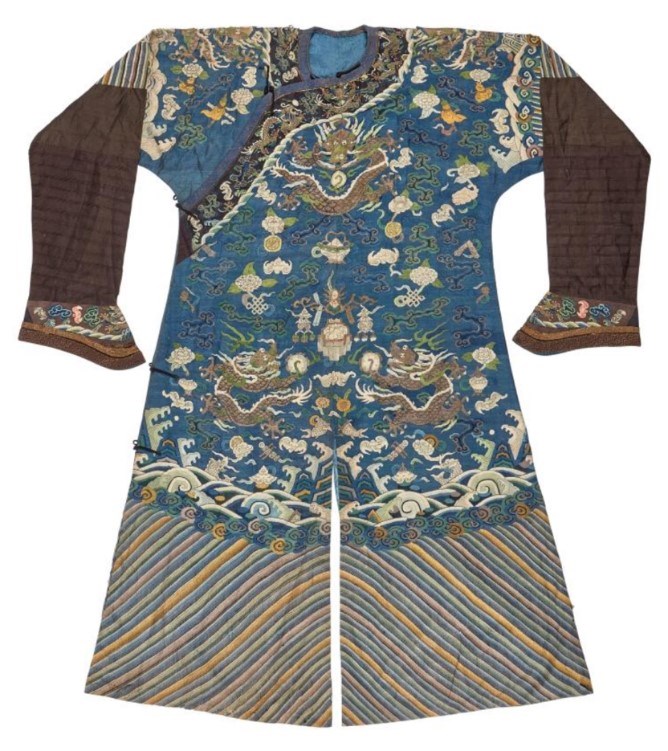 Lot 216: A 19th century Chinese kesi woven silk blue 'nine dragons' robe, of superb quality, is the highlight from the day two sale. The robe is finely embellished with nine five-clawed dragons picked out in metal covered thread, flying amongst swirling clouds, flowering peonies, fu bats and the bajixiang, with ribbed sleeves terminating in horseshoe cuffs with gold thread band. This robe that was made for a court official comes with an estimate of £8,000 - 1,200.

Day one will include: Fine Chinese Art, South East Asian Works of Art and Japanese Works of Art, taking place on Tuesday 17 May.

Day two will include: Chinese Ceramics & Works of Art, taking place on Wednesday 18 May.