The collection of Herbert Kennard

The collection of Herbert Kennard 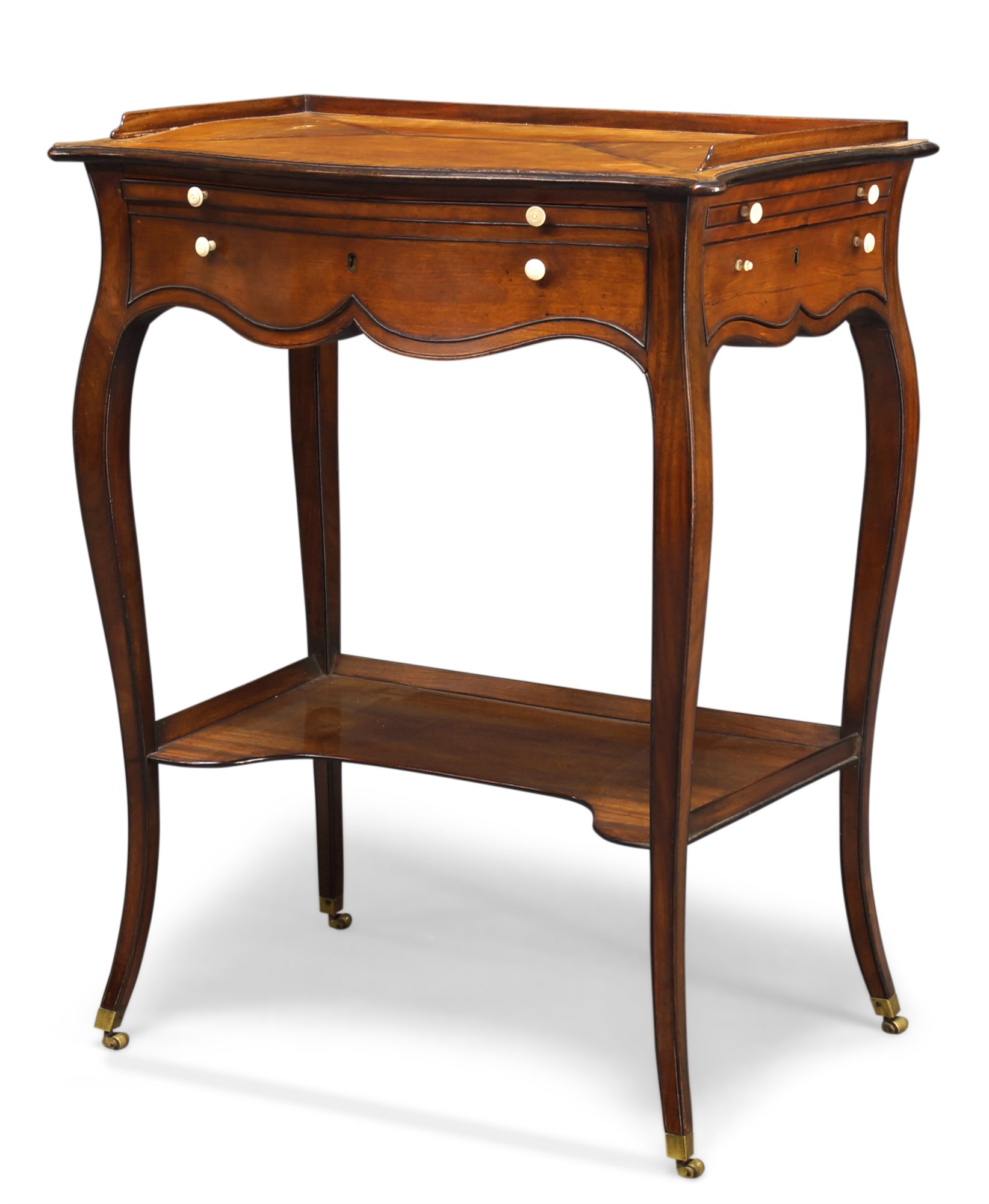 A George III satinwood and crossbanded serpentine writing table, to a design by Thomas Chippendale

Roseberys London: On Friday 26th March Roseberys are delighted to have been instructed to sell the collection of Herbert Kennard, who died peacefully on 19th March 2020 at the great age of 100 years. Mr Kennard still lived in the apartment in which he was born, although he had travelled extensively and worked abroad. A life that took in most of the twentieth century some fascinating memories of his early life recall a chauffeur driven Packard car and recollections of sheep being driven down the high street through St Johns Wood to graze in the park. He had a deep affection for the arts, opera and ballet especially. As this collection on offer at Roseberys demonstrates Kennard also had a passion for late 18th Century English furniture, satinwood in particular. As well as the furniture, he also collected all manner of associated works of art including a variety of different boxes, tea caddies and trays.  His working life was centred on Berkeley Square providing endless opportunities to explore and enjoy the then numerous decorative and fine art galleries active in the area. A renowned collector his purchases were made from many leading antique dealers often at the top fairs and we are fortunate to have so many of the original receipts. 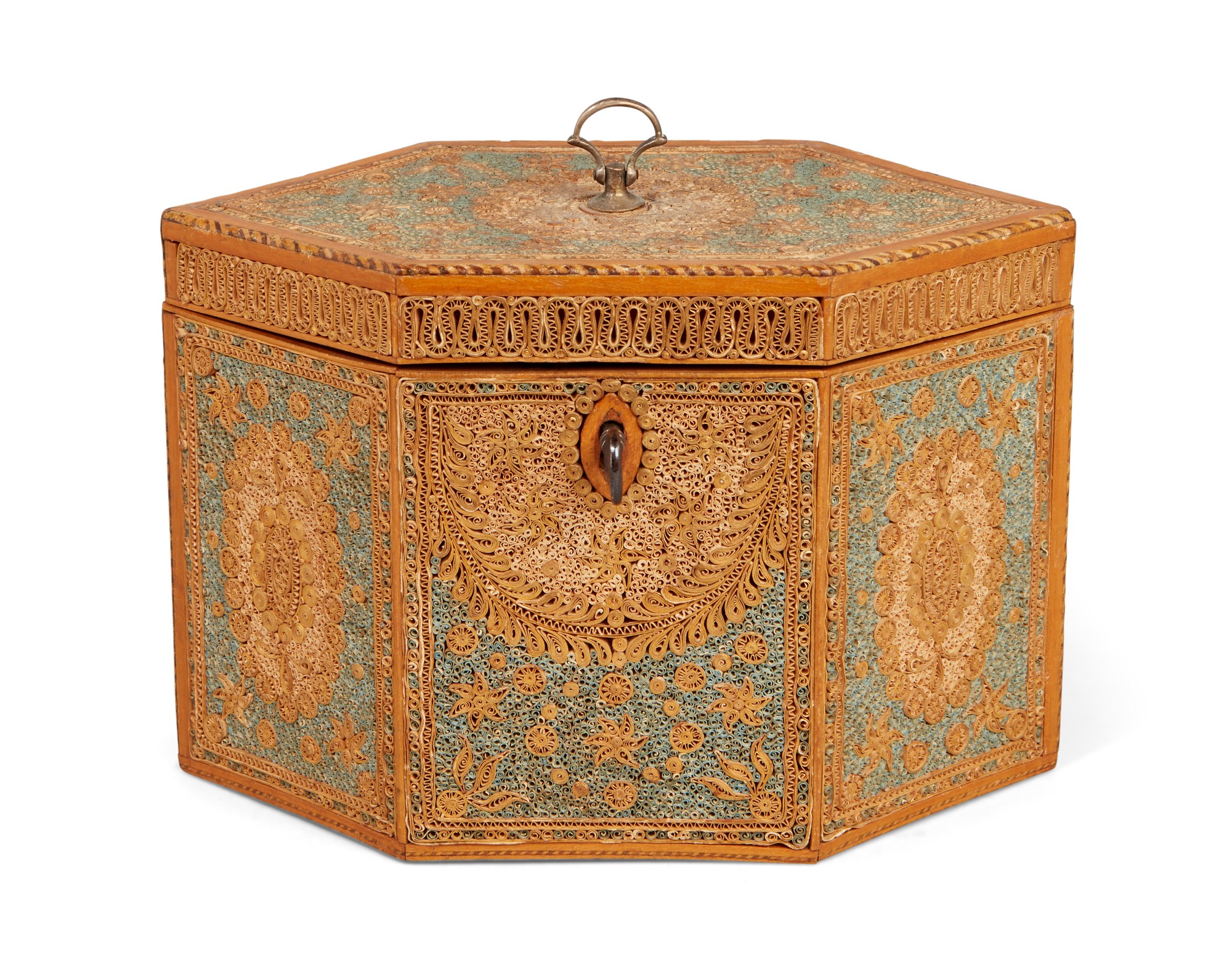 A close friend, Ian Turner offered the following memories: ‘I first met the extraordinary Herbert through a mutual friend. You never visited Herbert but were rather received by him, as he was always seated in a large armchair in his entrance hall. Time keeping was paramount. Five minutes early was unacceptable, and ten minutes late was a total disaster. Herbert’s collecting seemed to have started in earnest, some forty years ago, when Helen, his Governess, passed away. He adored her, but she didn’t like the idea of Herbert collecting and filling his home with satinwood. Herbert once remarked to me that he had to disguise his purchases as gifts if he wanted them to cross the threshold. After Helen died the collection started to increase on an industrial scale; with Herbert picking off the most beautiful pieces he could possibly find at the major London Fairs. Eventually, entering his home became somewhat restricted by the volume of exquisite items. To visit Herbert was always a sense of occasion. It was a step back in time to a lost era.  He would serve wonderful canapés and well iced Cinzano, before we set off on the next adventure.  He was an epicurean and loved to frequent the best restaurants. Herbert’s world was magical, and he had an unparalleled love and knowledge of the arts and travel. Indeed, it was a joy to be with Herbert, as he would always recount you something you didn’t know about a place, a person or an historical event. He was also a prolific correspondent, letter writing to friends around the globe. We meticulously attended all the London Fairs over the years; never failing to spot another piece of satinwood and purchase it. As the collection grew the objects had to reduce in size to accommodate them.  I could never attempt to describe Herbert’s life in words but when, on his 100th birthday, he received his telegram from The Queen...he had it in front of him on his desk...placed next to it however, was another card which seemed to have really touched Herbert. It said “You’ve seen the Great Depression, a World War, a Cold War, a space race, astonishing technological and cultural achievements...And yet you remain a bulwark of decency, wisdom and dignity in a chaotic and unpredictable age.”

Satinwood furniture is a prominent feature within Kennard’s collection. Leading the highlights from the auction is a pair of Regency parcel gilt and painted satinwood occasional tables/pole screens, coming with a provenance from Ronald Phillips Ltd, 18th June 2006. The octagonal tops are wonderfully decorated with a floral painted border, on adjustable stands and gilt spiral turned column supports to tripod legs raised on spherical feet. The pair of tables come with an estimate of £2,000 – 3,000. 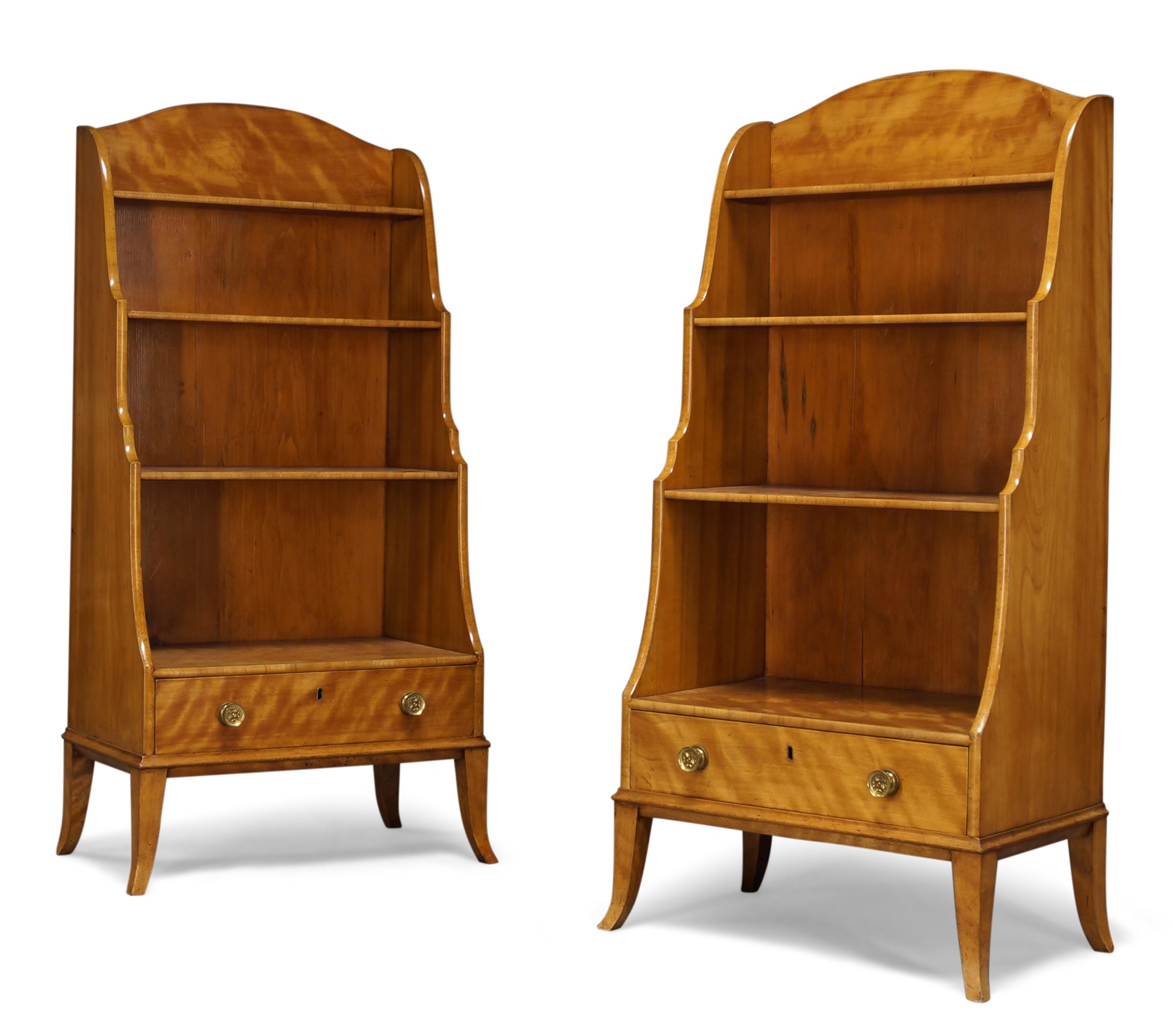 Elsewhere in the sale are a pair of Regency satinwood waterfall bookcases, with four graduated shelves above single drawer to base, on square tapering and curved feet. The pair of bookcases come with a provenance from Lennox Cato and have been entered onto the market at £1,500 – 2,000. 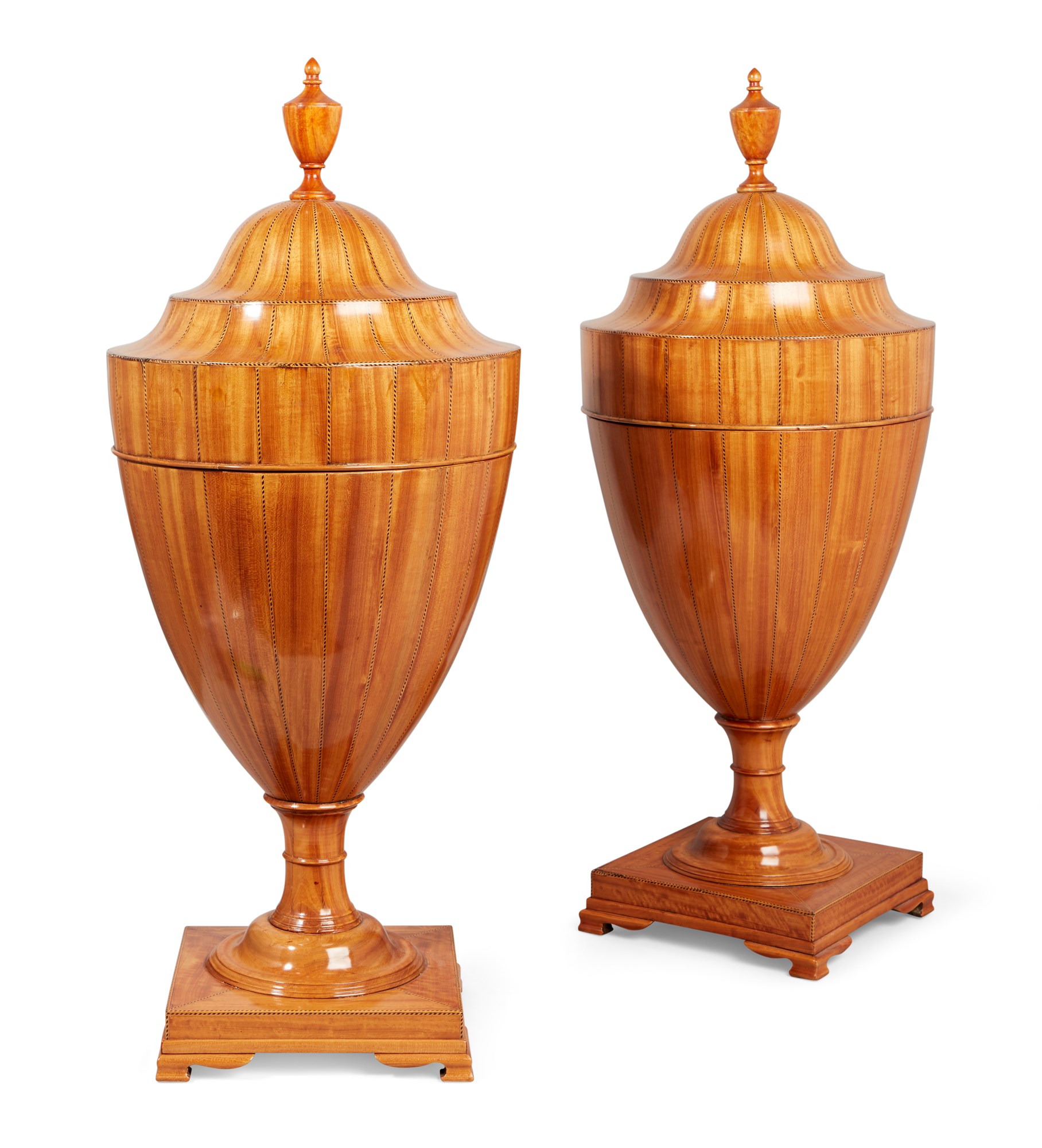 Other satinwood items within the sale are a pair of George III Sheraton satinwood cutlery urns. The solid urn finials above boxwood and ebony chequered inlaid lids and matching body are on moulded square bases, on bracket feet, with void interiors. They come with a provenance from Patrick Sandberg Antiques, London, 8 November 2003 and an estimate of £800 – 1,200. 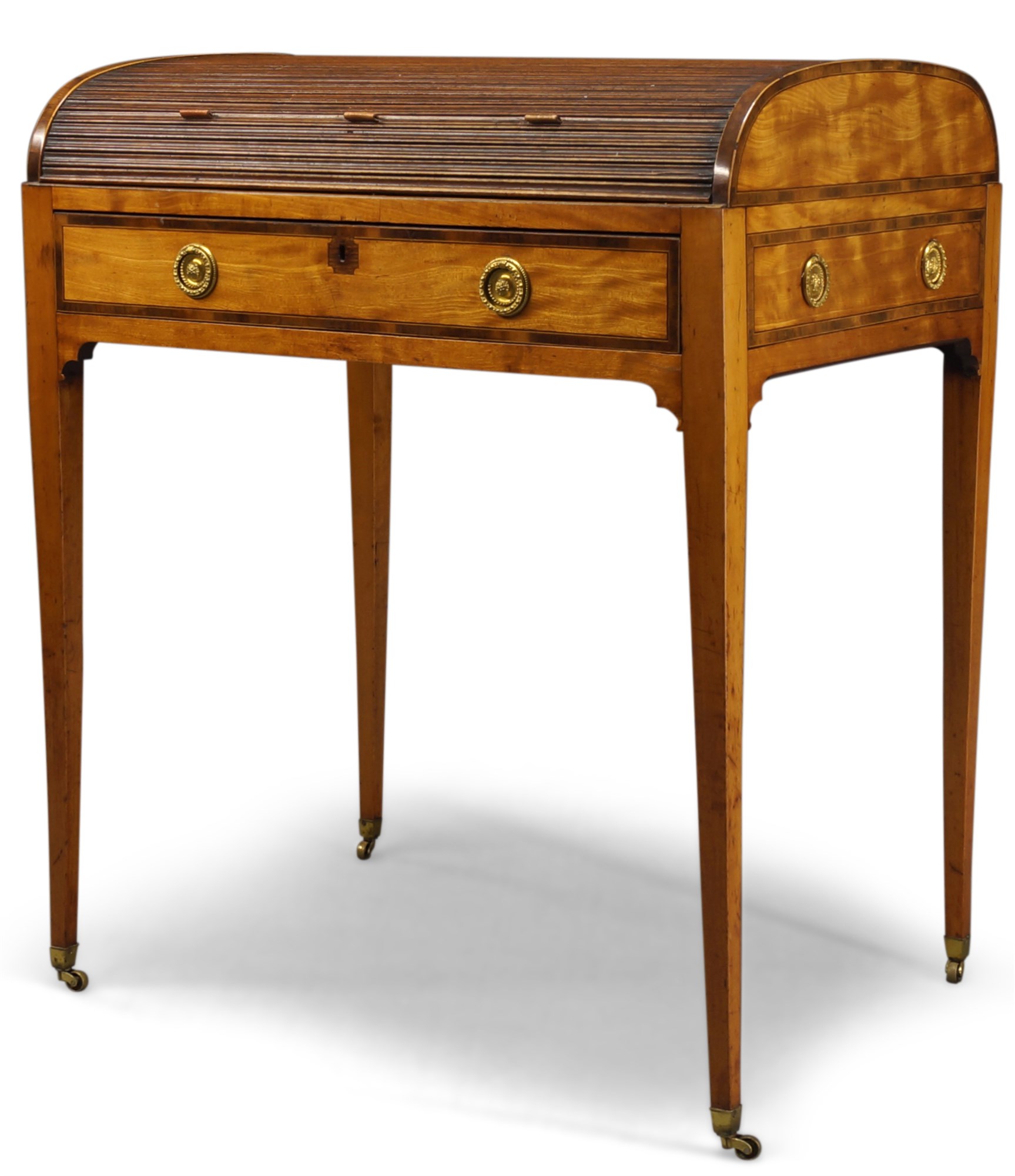 Coming with the same estimate of £800 – 1,200 is a George III satinwood and crossbanded tambour writing desk. The tambour enclosing red leather inset writing surface is on an adjustable ratchet mechanism, over single frieze drawer, raised on square tapering legs to brass caps and castors. Like most items within the sale this lot comes with a provenance from a respected antique store, this one coming from Lennox Cato, on 15th November 2010. 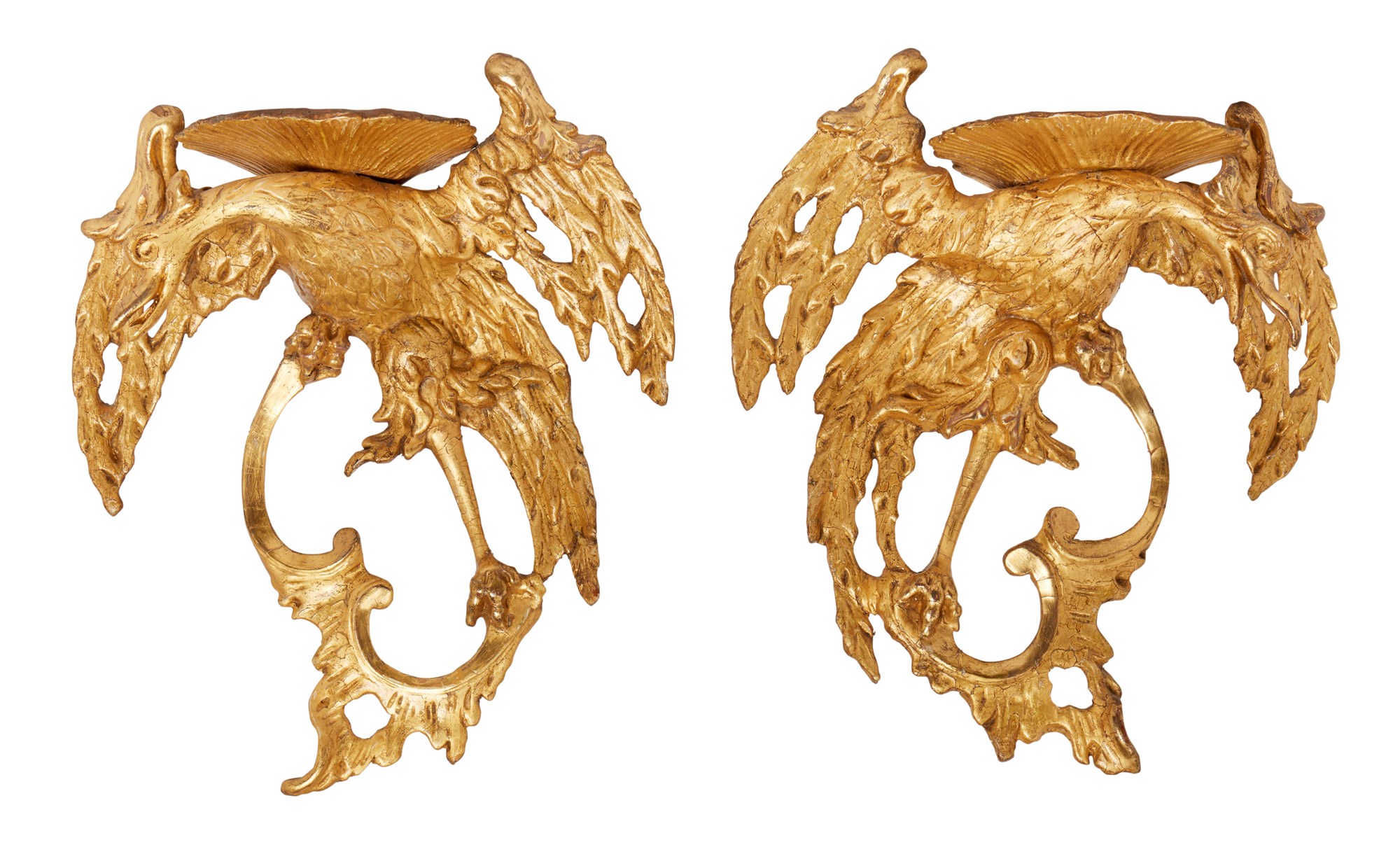 These decorative wall brackets have been entered into the market with an estimate of £1,000 – 2,000. The pair of George II giltwood and gesso Ho-Ho bird wall brackets, central bird above C scroll support, holding shell plinths. They were bought from Avon Antiques in Bradford-on-Avon, Wiltshire, 5 July 1993.

Entered into the marketing at £3,000 – 6,000 are twelve bottles of Chateau Margaux 1982, Medoc, France, in a wood case. Located in the Médoc region, Château Margaux is a wine-growing estate with a unique terroir, belonging to the Mentzelopoulos family since 1977. Another notable collection of wine on offer, twelve bottles of Chateau Ducru-Beaucaillou Saint-Julien 1982, Medoc, France, also coming in a wood case. 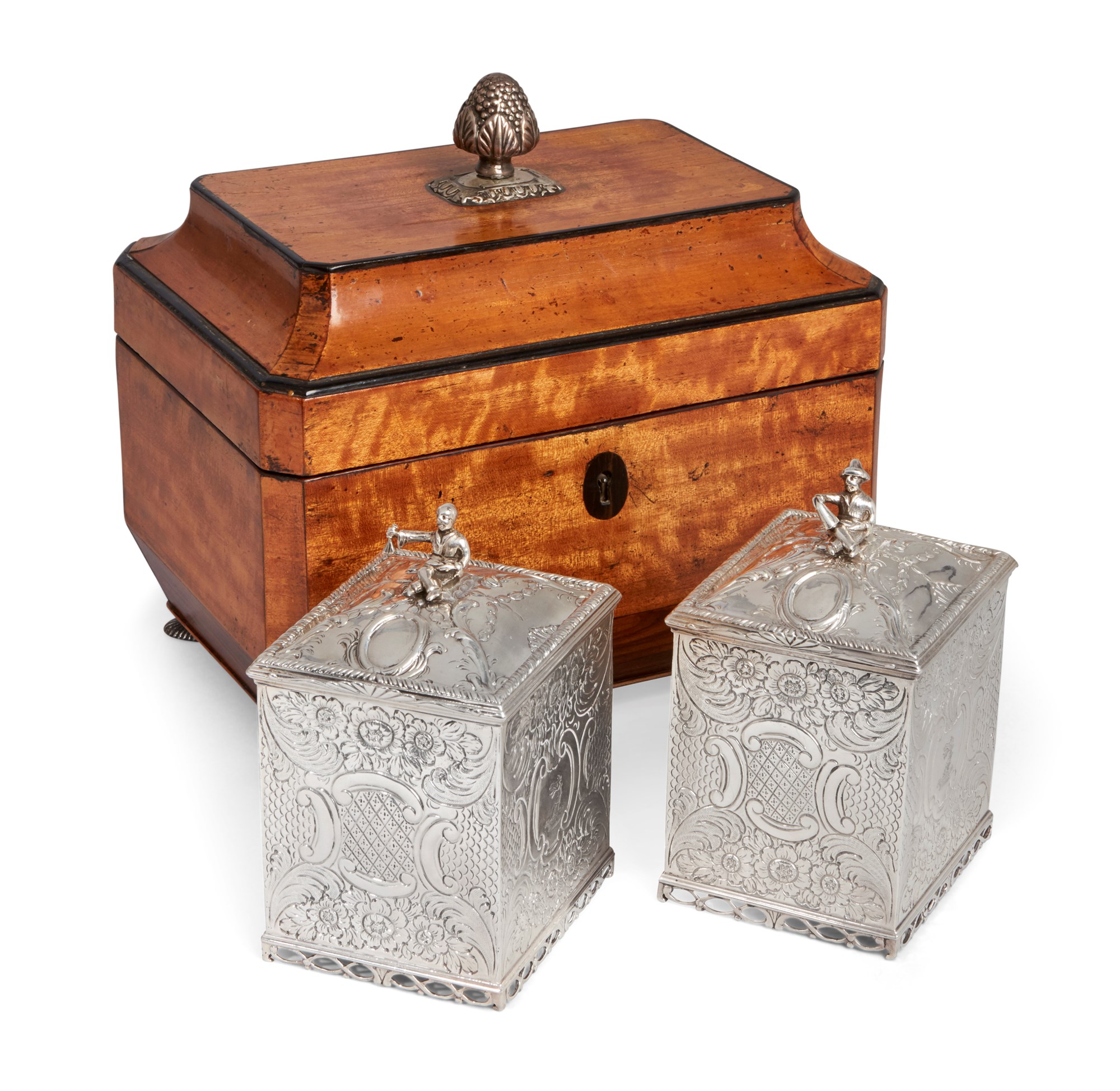 Another prominent feature within the auction is an extensive collection of over 50 tea caddies. Leading the highlights within the collection is lot 110. The pair of George III silver tea canisters, Edward Darvill, London, circa 1760 have been entered into the market with an estimate of £1,500 – 2,500. Each tea caddy is of rectangular form with floral scroll repousse decoration, the side panels with engraved crest and shield and the domed hinged covers with Chinaman finials, on pierced collet feet. They are presented within a later satinwood two division caddy with silver bud finial on four silver shell bun feet, the silver hinges hallmarked RG, Sheffield 1812. These tea caddies come with a provenance from Hampton Antiques, Ashton, Northampton, 25 September 2015. 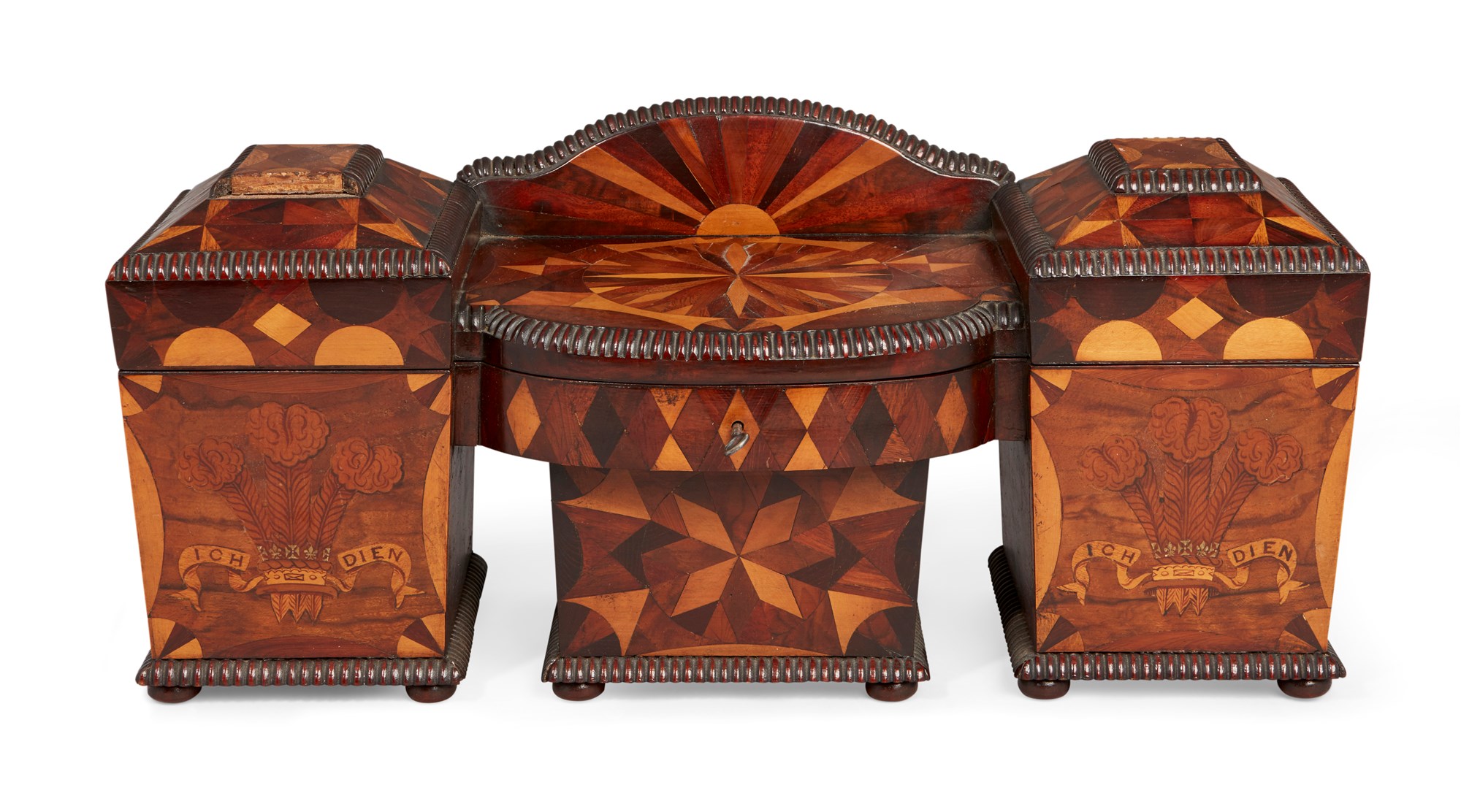 Another elegant tea caddy included within the auction is this rare and large walnut and parquetry “sideboard” tea caddy, 19th century. Decorated overall with geometric designs, the front inlaid with the Prince of Wales feathers and inscribed ICH DIEN, enclosing two canisters and a glass blending bowl, it is estimated to make £800 – 1,200. 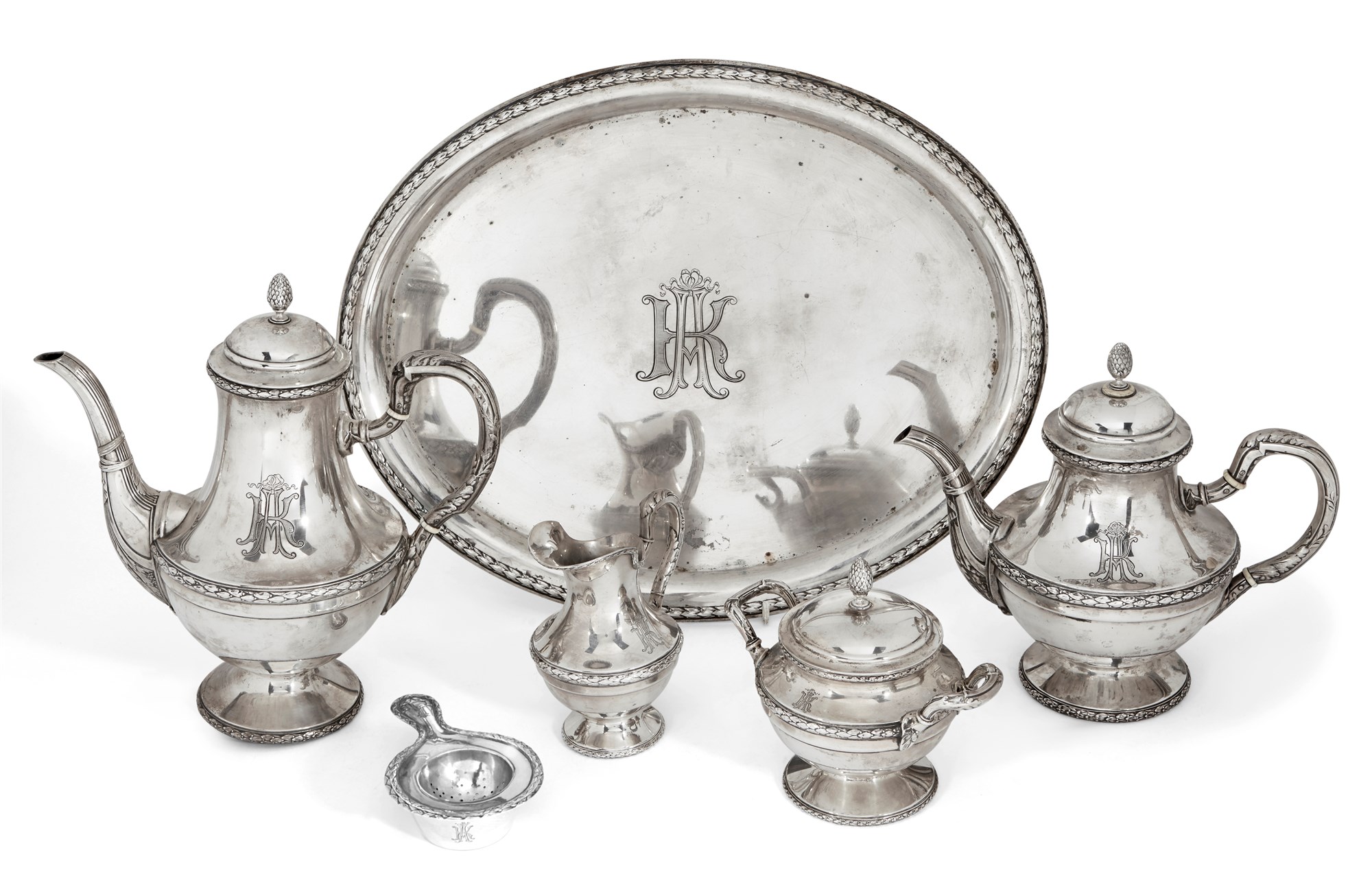 Also included in the sale is an impressive collection of silverware on offer. Highlighting the silverware within the sale is this German 800 standard silver tea service, Frankfurt-am-Main, 1870-1930, Lazarus Posen. The tea service compromises of an oval tray, a tea pot, hot water pot, lidded sugar pot and milk jug, together with a matched tea strainer and stand (stamped 800, not marked Posen), each decorated with laurel leaf banding and monogram, the pots with pine cone finials and the tea and coffee pots with foliate decoration and ivory spacers to handles. This silverware set comes with an estimate of £1,000 – 1,500. 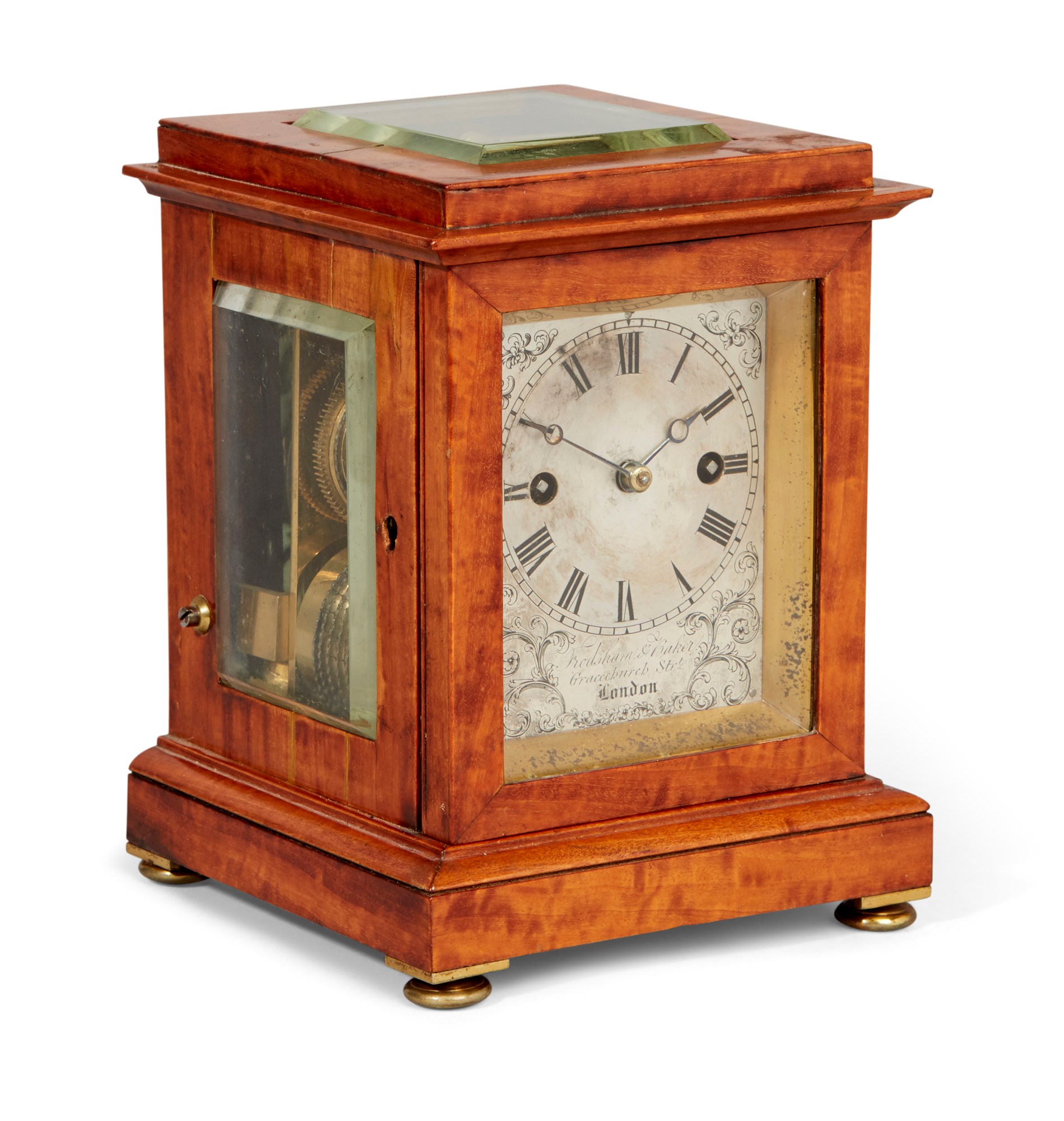 A Victorian satinwood cased library clock by Frodsham and Baker, circa 1860

Rounding up the highlights on offer is this Victorian satinwood cased library clock on brass feet by Frodsham and Baker, circa 1860. The engraved silver dial has Breguet style hands and the backplate is inscribed Frodsham, Gracechurch St, London. This clock comes with an estimate of £1,000 – 1,500.

The collection of Herbert Kennard: Live online only auction