Surrealism: 5 Artists Exploring The Art of the Unconscious

The Surrealist movement war born in the 1920s in Europe, willed into being by a variety of influences. The psychoanalytical writings of Jean-Martin Charcot, Pierre Janet, and – in particular – Sigmund Freud formed an intellectual foundation for the movement. Freud had been writing since the 1890s about the concept of the ‘Unconscious’ – a part of the human mind where our basest, most primal desires were stored. These desires were fundamentally at odds with modern society, and we witnessed flashes of the Unconscious in our dreams. The Surrealist founder Andre Breton was particularly influenced by Freud, whom he met two years prior to writing the first Surrealist Manifesto. His goal was the development of a “surreality” – a resolution of dream and ‘real’ states. Although the dreams we have over a lifetime have no maintained narrative, for Surrealist thinkers it was actually our waking lives which were an interruption to our Unconscious dreams – not the other way around. A key influence, too, on the Surrealists was the Dadaists who came before them, whose work engaged with the nonsensical nature of living, inspired by the horrors of the First World War. The Surrealists’ goal was to harness the creativity of the Unconscious mind, and highlight the falseness of “the real world”. 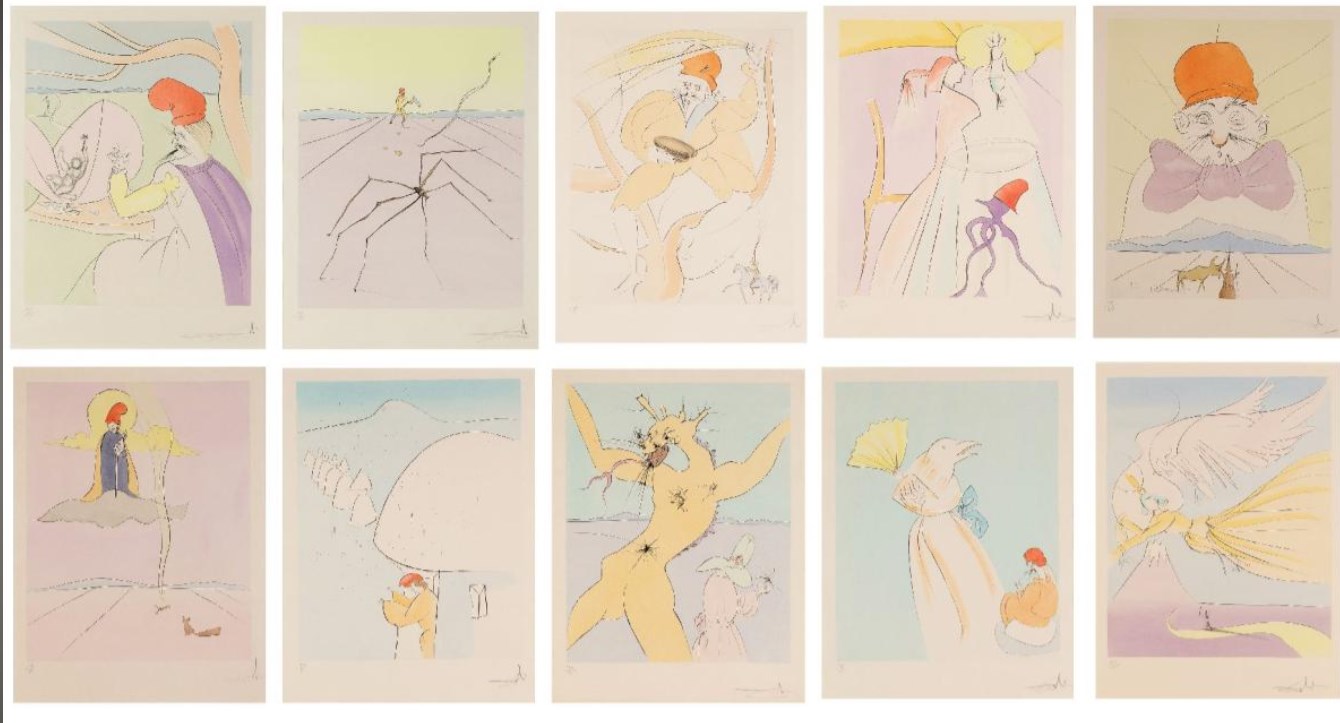 “Surrealism, such as I conceive of it, asserts our complete nonconformism clearly enough so that there can be no question of translating it, at the trial of the real world, as evidence for the defense.”
André Breton, First Manifesto of Surrealism (1924) 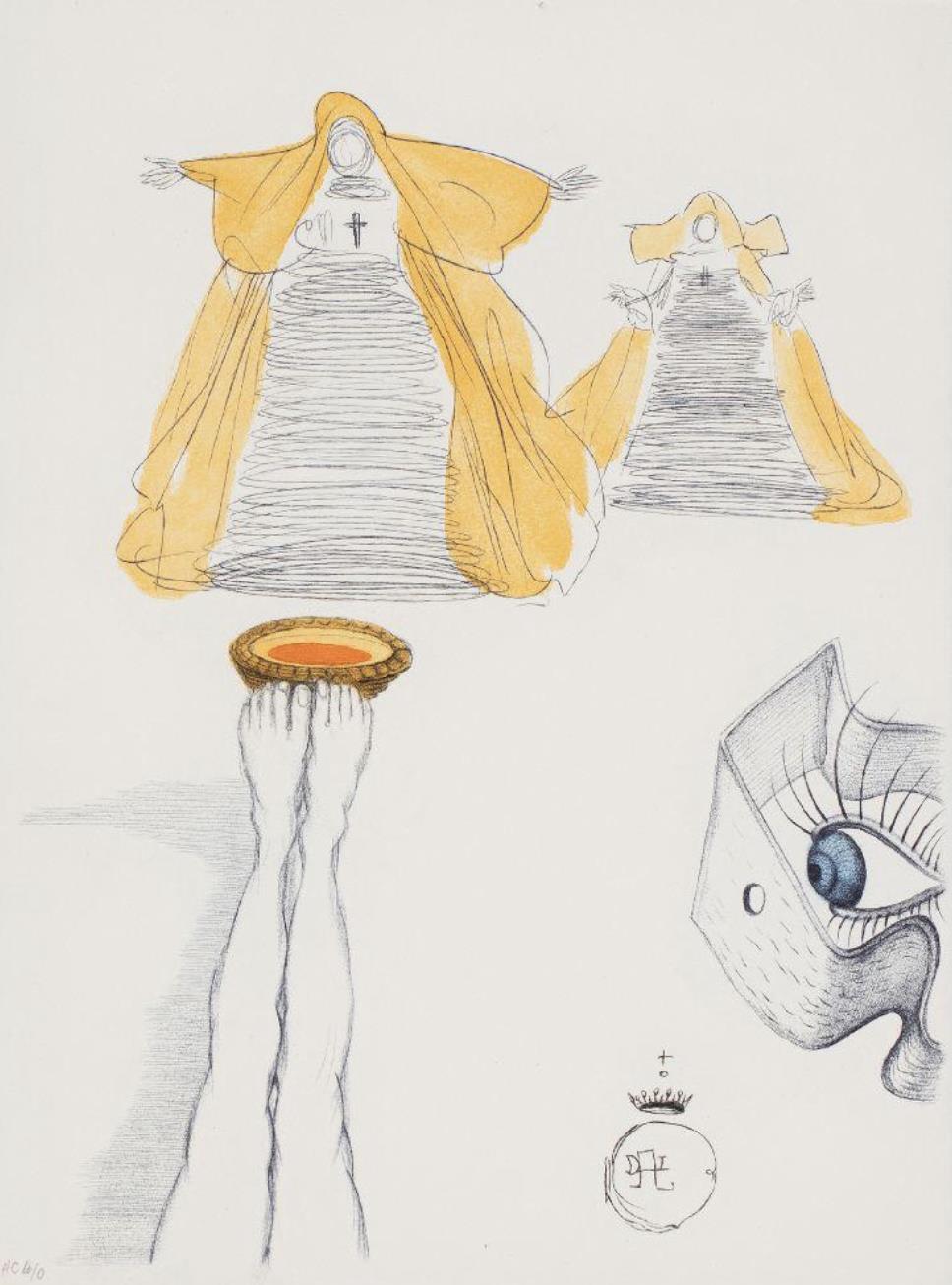 Perhaps the most famous Surrealist, Salvador Dalí was born in Spain in 1904. During his involvement with the Surrealist group, he created several artworks which came to epitomise the Surrealist style. His works were littered with images from dreams and psychoanalytical codes. Dalí was actually expelled from the group for his political interests, which was deemed to be conflicting with the group’s core beliefs. Even in his later work, however, like the Lots included in this sale, the Surrealist influence is there. In Japanese Fairy Tales (which already points to themes of where fiction meets reality) there are instances of the vast empty planes, harsh perspectives, stylistic clashes, and dream-like characters which are present in his most typically Surrealist pieces. 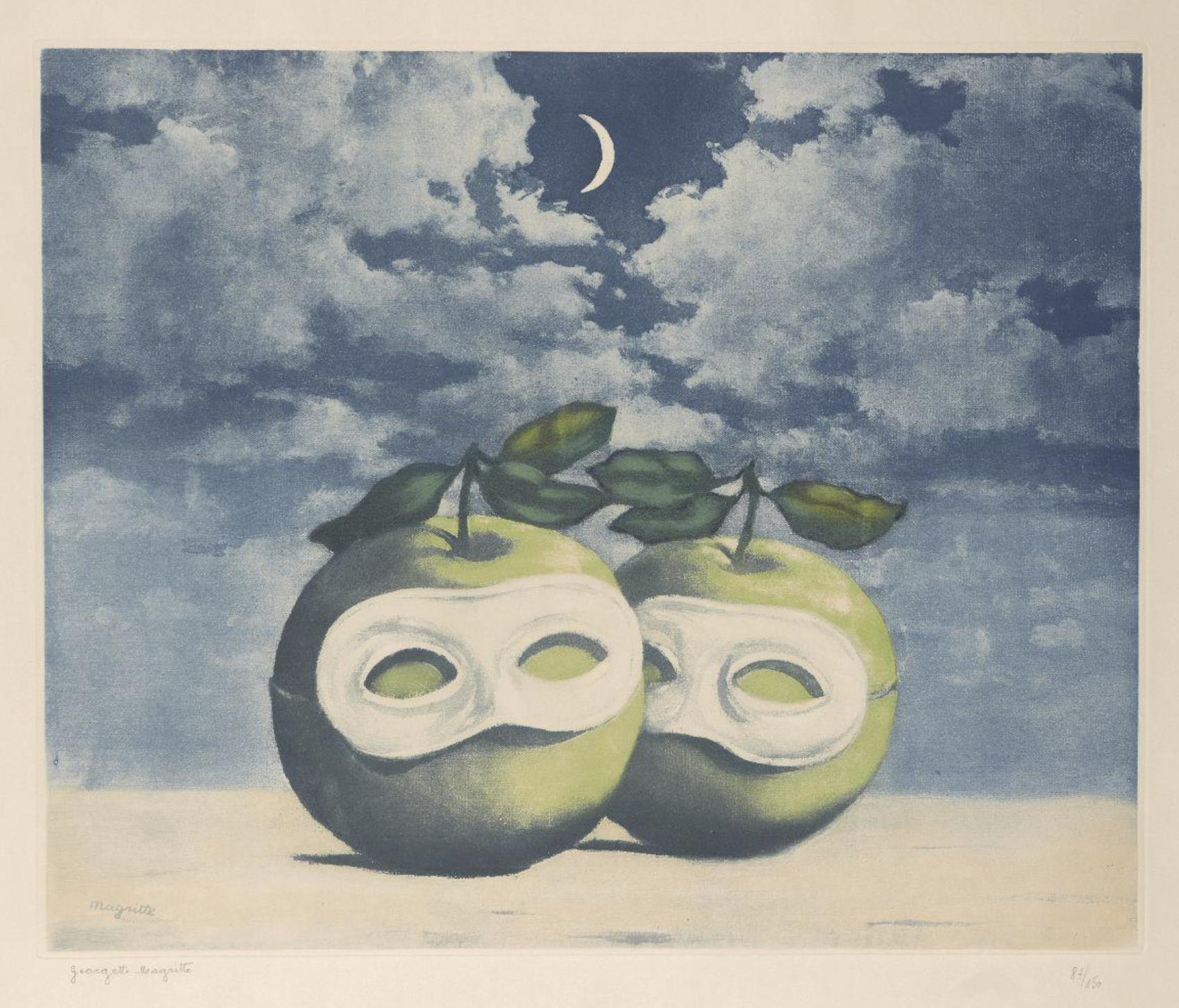 René Magritte was born in Belgium in 1898 and befriended André Breton when he first moved to Paris in the late 1920s. Magritte’s work is famed for its contradictions: daylight scenes lit by moonlight; portraits showing the back of the sitter’s head ( or indeed no head at all); pipes which are not pipes. In Lot 77, we see a work made after Magritte’s series of works showing apples in masquerade masks. Apples appeared many times in Magritte’s work, who insisted that they played a role in his desire to show conflict between “the visible that is hidden and the visible that is present” and how “everything we see hides another thing”. 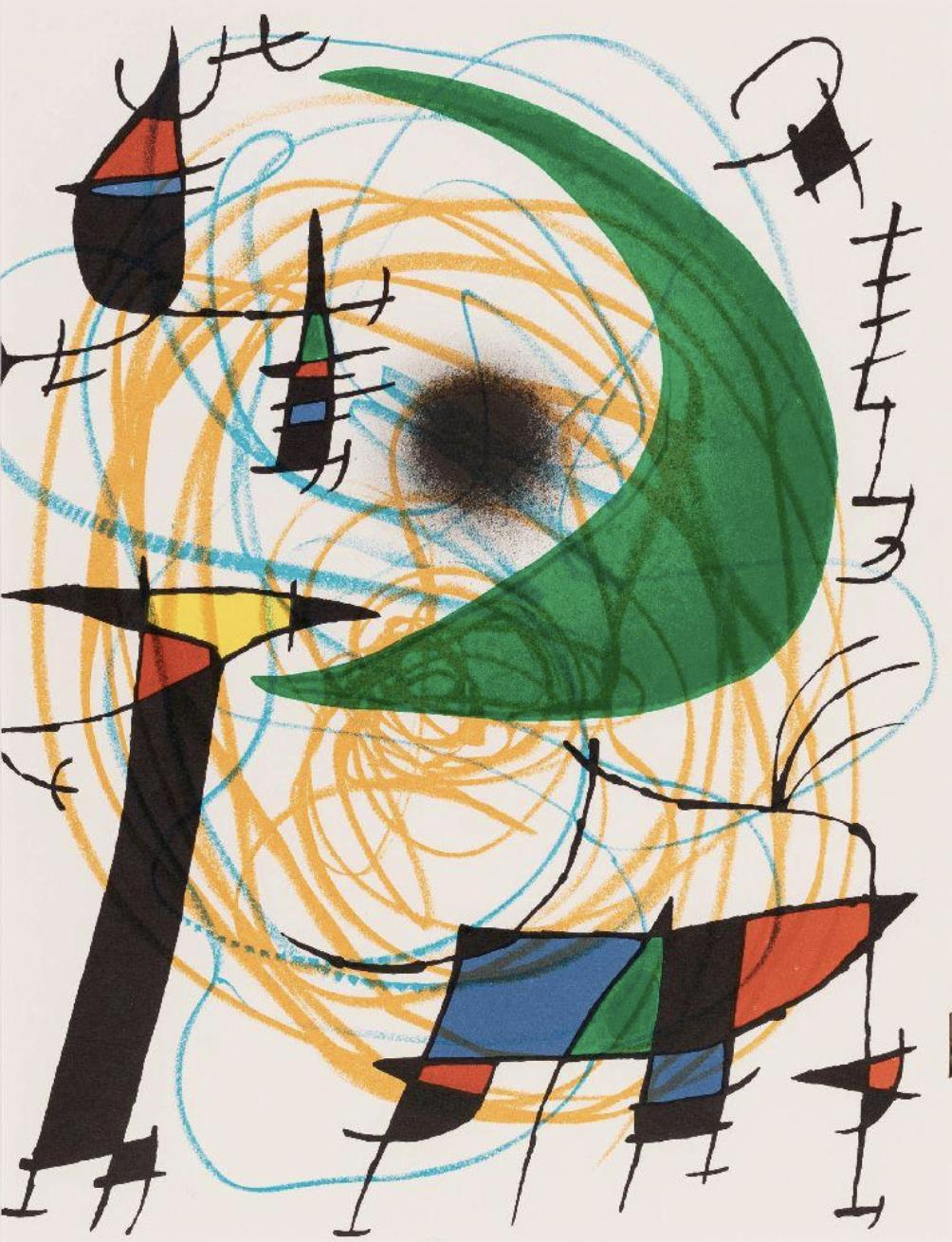 Joan Miró, born in 1893 in Spain and an early joiner of the Surrealist group in 1924, harnessed the Unconscious in his painting technique, not just in his painting content. Miró embraced what is called ‘automatic drawing’ to create his “dream” paintings. Automatic drawing sees an artist allow their hand to be led by their Unconscious mind, electing not to make active decisions on object placement or shape. This Surrealist approach to mark-making is evident in both of Miró’s Lots included in this sale (Lot 72 & 73). 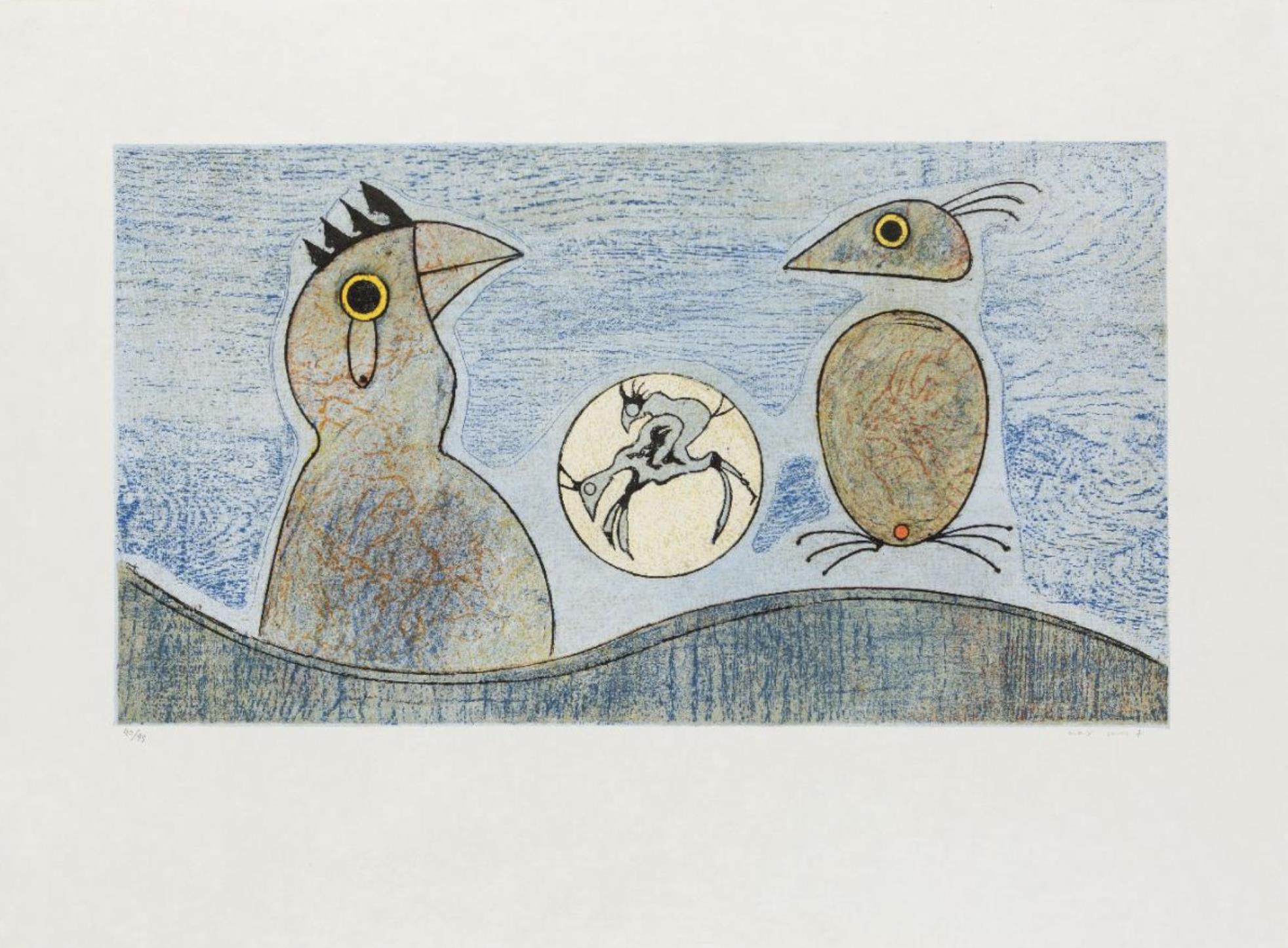 Max Ernst was born in Germany in 1948 and was a key player in both the Surrealist and Dada groups. Ernst’s Lots included in this sale show the Surrealist influence on his work which would last a lifetime. In Lot 81 we see a composition not bound by reality, with a central circle which evokes a pseudo-sexual / embryonic state, which nods to the primitive desires of the Unconscious. In Lot 80 we see “real” violence countered by non-realistic detailing. 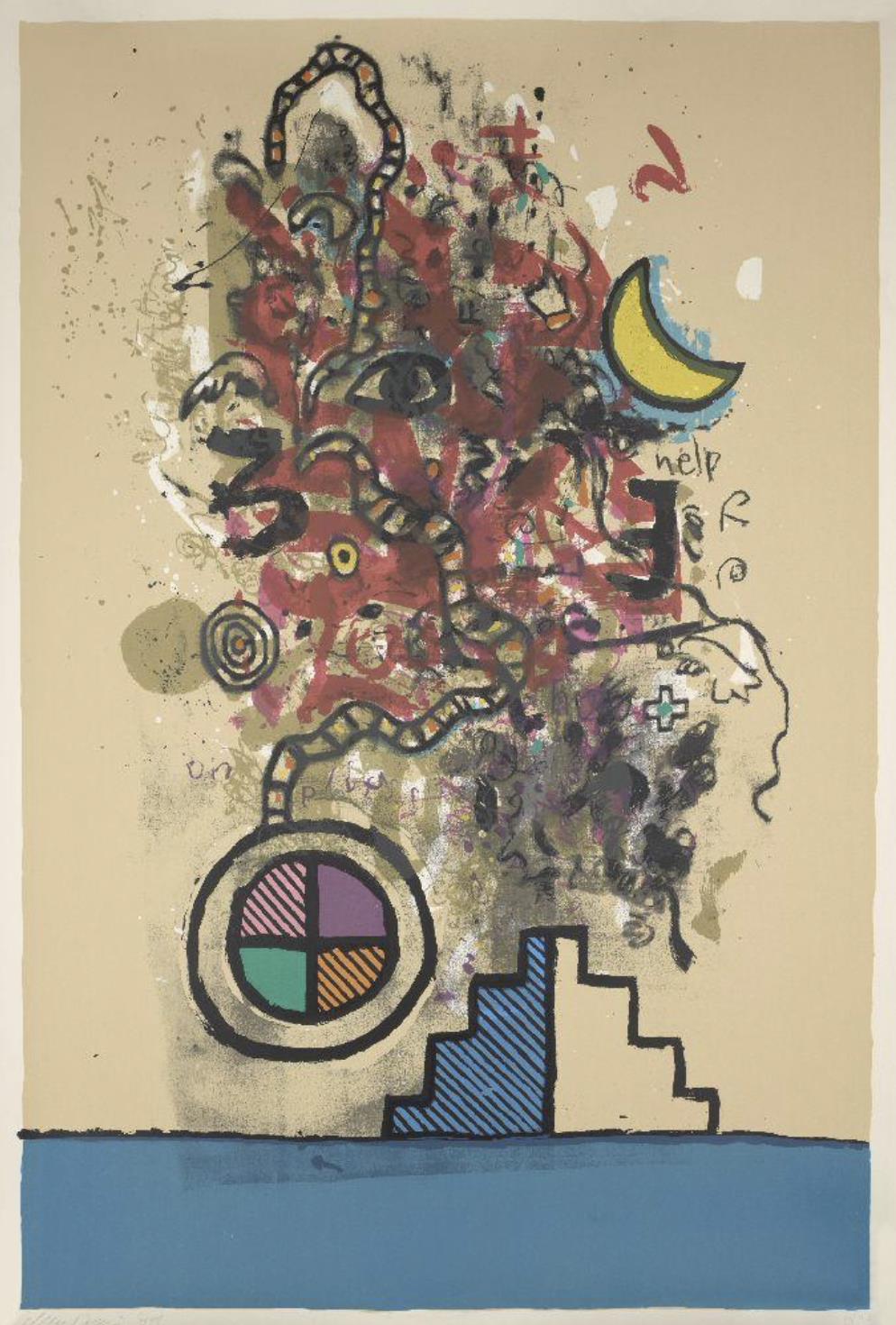 Not actually a member of the Surrealist group, Alan Davie – a Scottish painter born in 1920 – uses, like Miró, automatic painting methods to explore the Spiritual. Davie was deeply interested in psychoanalyst writings and Zen philosophy. His belief that spirituality is at odds with rational thought (a belief very similar to that held by the Surrealists) inspired his automatic painting style which is well represented in Lot 142.