that took place on Wednesday 13 October was an outstanding success.

William Summerfield, Head of Sale commented: ‘This was an extremely strong sale, with many lots souring over their high estimates, bolstered by many phone bidders, for dramatic scenes in the sale room. There were strong prices in all areas, from Modern to Contemporary.’ 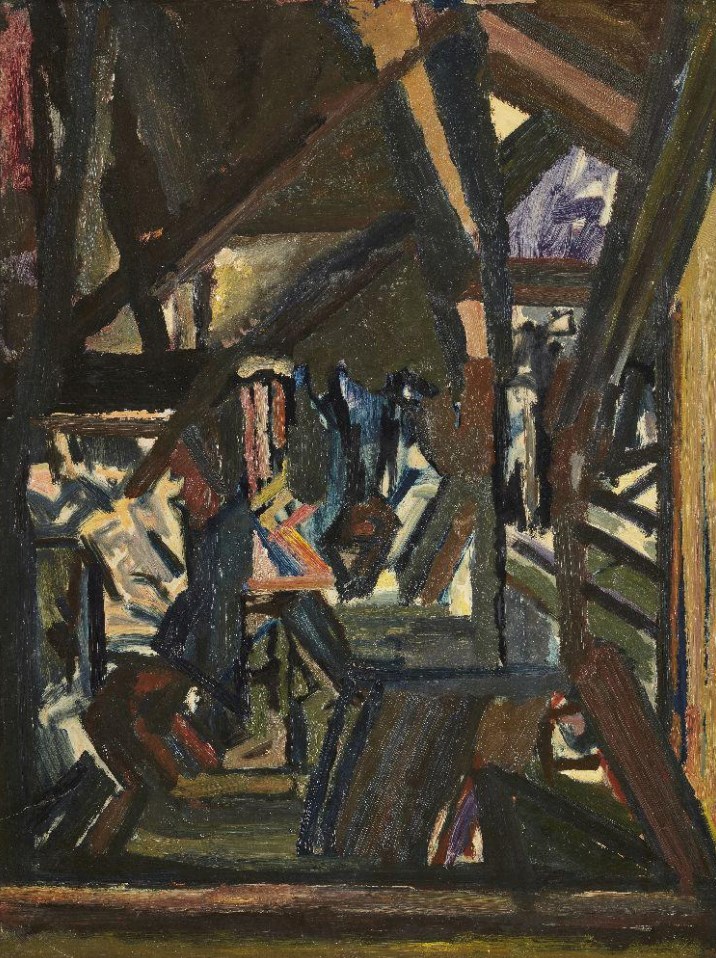 The outstanding highlight of the sale was lot 25, David Bomberg’s ‘The Bomb Store’ painted in oil on paper laid down on board in 1942, which came with a provenance from the Boundary Gallery, London. Four telephone bidders kept the prices going up and up, to achieve a fantastic total of £50,000 for this painting, overtaking its top estimate of £30,000.

Lot 41, a bronze, conceived in 1971 in an edition of 5 by Denis Mitchell achieved a price of over double its top estimate, making £25,000 at auction. Mitchell (1912-1993) was a significant member of the St Ives group. This work titled ‘Trevean’, is an abstract exploration of form, mass and space, is typical of Mitchell’s output, and reveals the influence of contemporaries such as Barbara Hepworth, with whom he worked as an assistant for 10 years.

Another bronze sculpture by Denis Mitchell, ‘Lamorna’, made earlier in 1969; similarly in an edition of 5, initialled, titled, dated and numbered under base, also far exceeded its pre-guided price expectations. Estimated to make £4,000-£5,000, this work (lot 42) made £15,000, going to an online bidder. 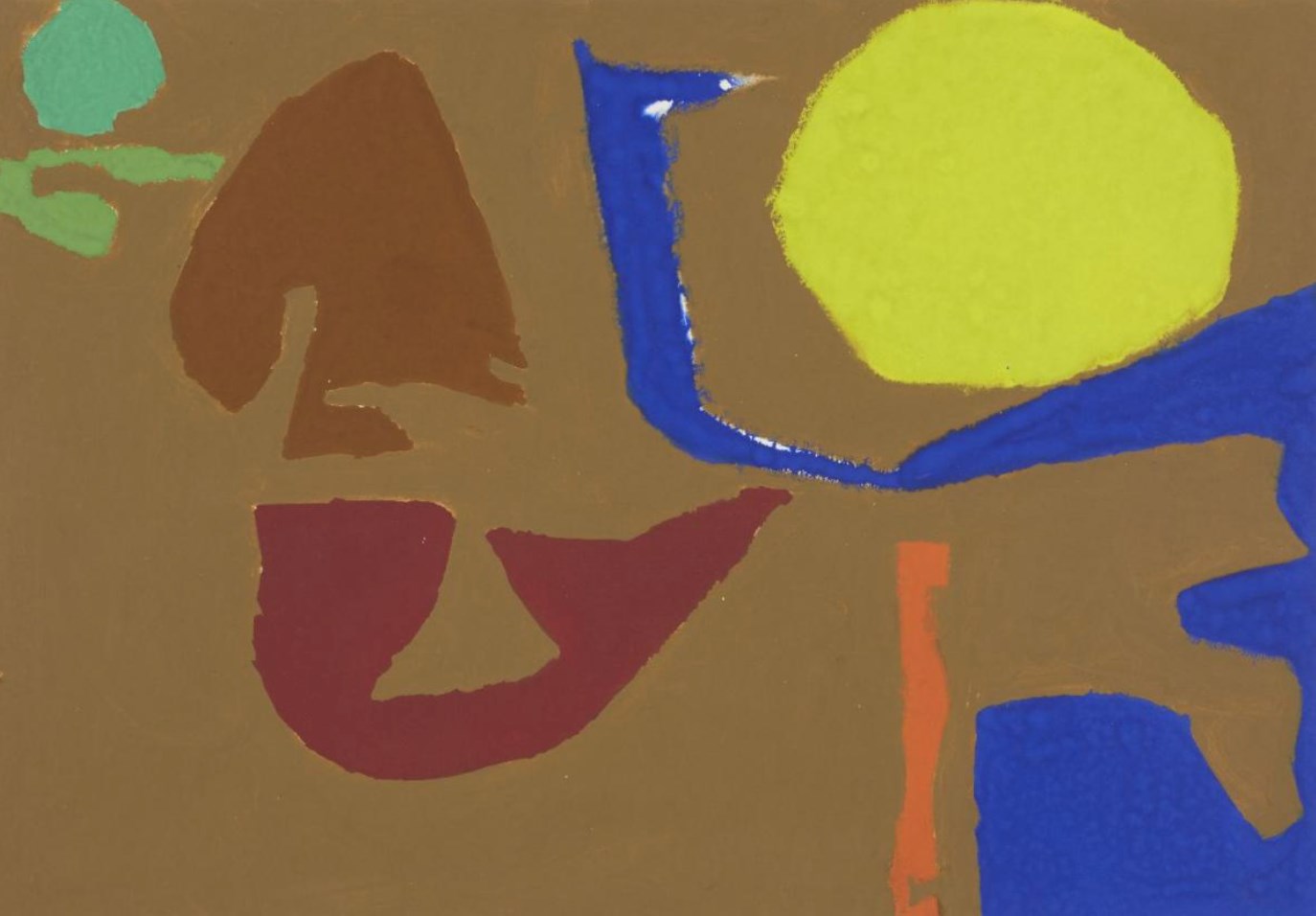 Titled ‘December 31: 1982: I’ lot 37, a gouache on paper by Patrick Heron, 1920–1999 made £12,500 at auction, selling to an online bidder. This work is a highly characteristic example of the artist’s mature style, demonstrating his exploration of the depiction of light, space, and colour. Living and working largely in Cornwall, Heron was closely connected to figures such as Ben Nicholson and Barbara Hepworth who, like Denis Mitchell, worked for Bernard Leach at the Leach Pottery. As such, Heron was very much a part of the St Ives School which shaped the future landscape of 20th-century British art. 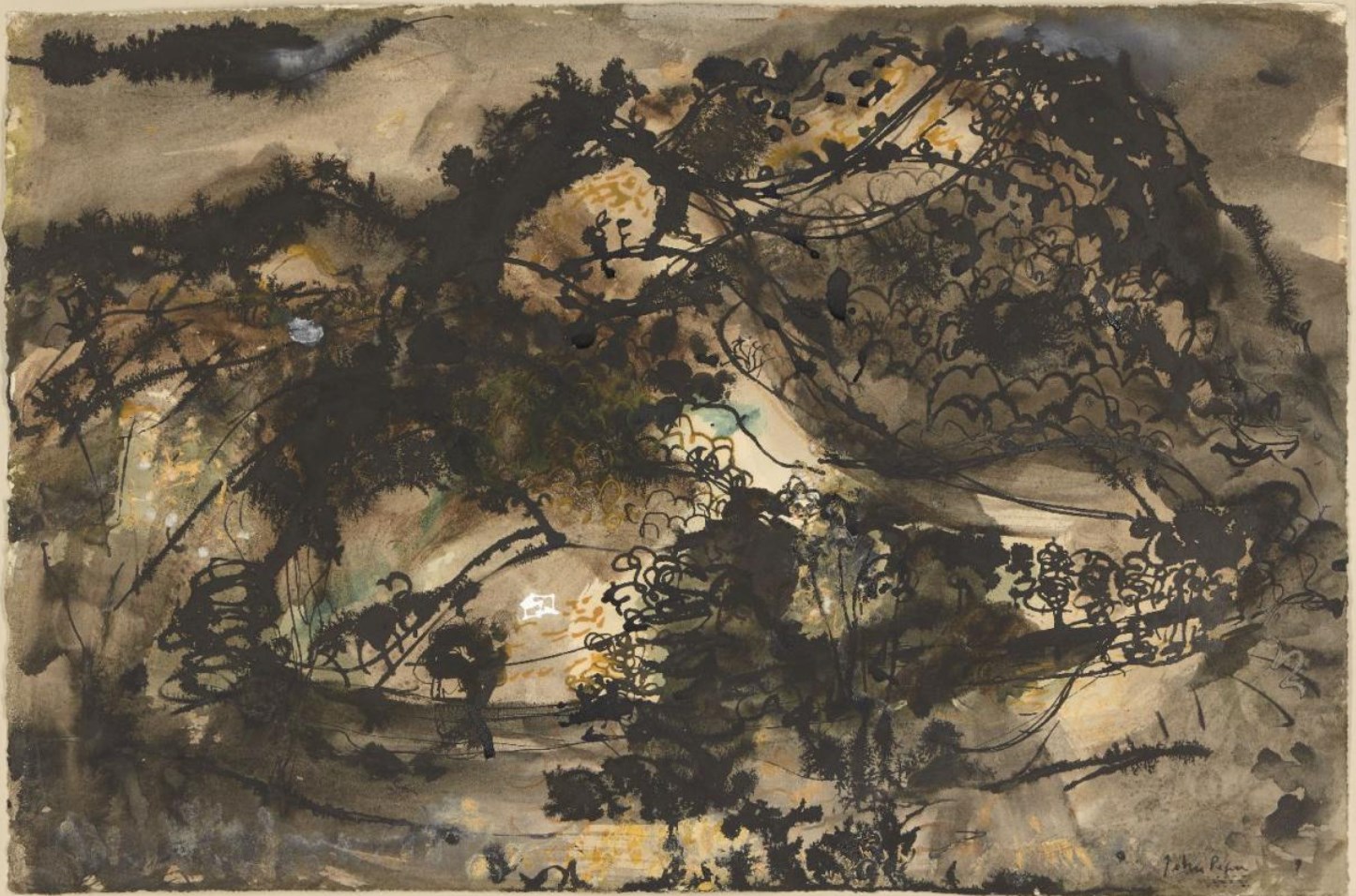 made £10,625 at auction. John Piper was a hugely significant and influential British artist, known for his romantic depictions of ruined landscapes and buildings. Piper was a member of the avant-garde group the Seven and Five Society alongside Ben Nicholson, Henry Moore and Ivon Hitchens, and was designated an Official War Artist during the Second World War. His depictions of the Blitz are amongst the most famous and remembered works of the period. 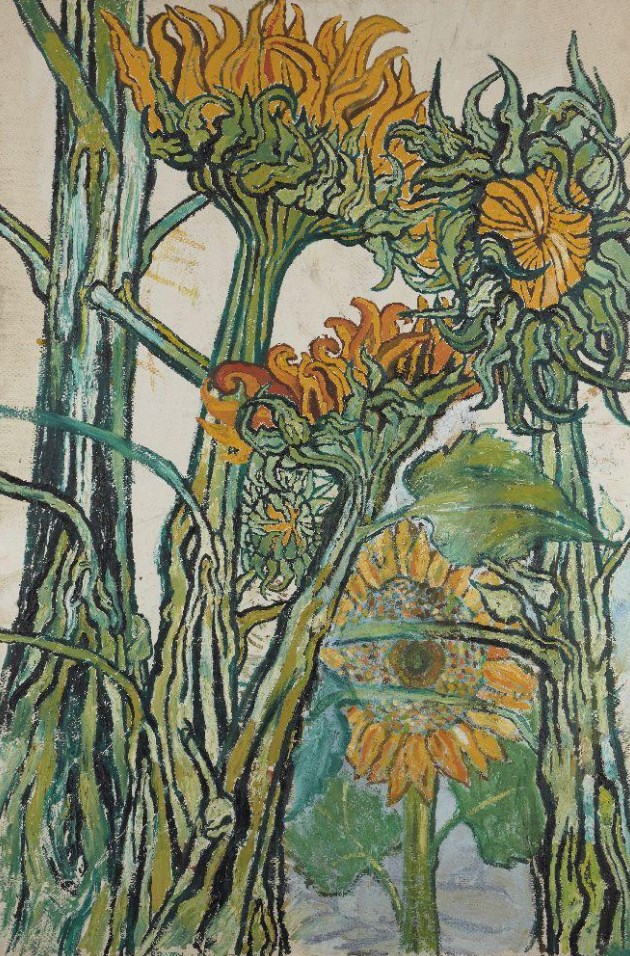 Lot 71, an oil on canvas, measuring 152.5 x 101.5 cm, by John Bratby RA,1928-1992, titled ‘Sunflowers’ which came with an estimate of £6,000- £8,000, made £9,375.  Bratby is known for his central role in the Kitchen Sink movement, depicting the mundane and everyday surroundings of a contemporary domestic interior and was therefore connected to contemporaries such as Jack Smith, Derrick Greaves and Edward Middleditch, exhibiting alongside them when representing Britain at the Venice Biennale of 1956. Bratby’s use of heightened and somewhat clashing colours and his flattening of the visual plane, are typical features which define the artist’s work, revealing the influence of Fauvism, and also Van Gogh, in Sunflower paintings such as this. The mother of the original owner of this work was painted by the artist in 1985. She purchased the work from the artist during the sitting and gifted it to her son. 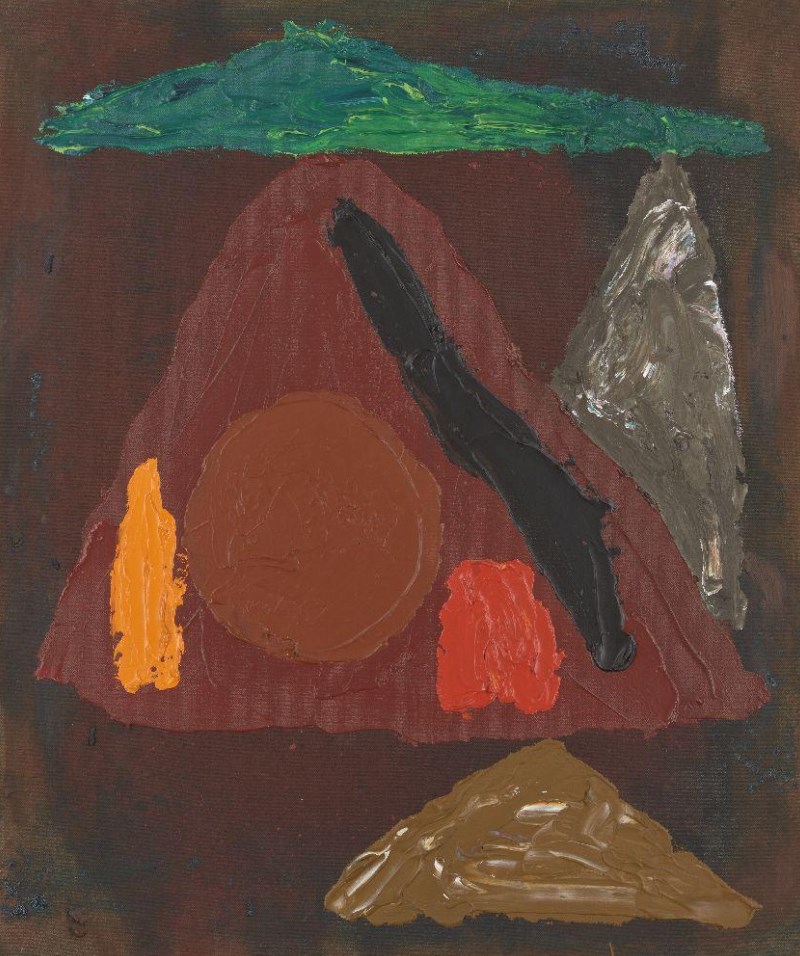 Lot 51 by John Hoyland RA,1934-2011, titled ‘Caprice’, an acrylic on canvas measuring 60.5 x 51 cm was painted in 1983 made £6,875. This is a classic example of Hoyland’s unique painterly language, and demonstrates why he is regarded as one of the greatest British painters of the late 20th century. Despite his rejection of ‘abstraction’ as too formal and restrictive a label, Hoyland was a central force in the development of abstract art in mid-20th-century Britain. He was closely connected to the Abstract Expressionist movement, which was burgeoning in America at the time, with his travels to New York in the 1960s leading to his association with figures such as Robert Motherwell, Barnett Newman and Mark Rothko. 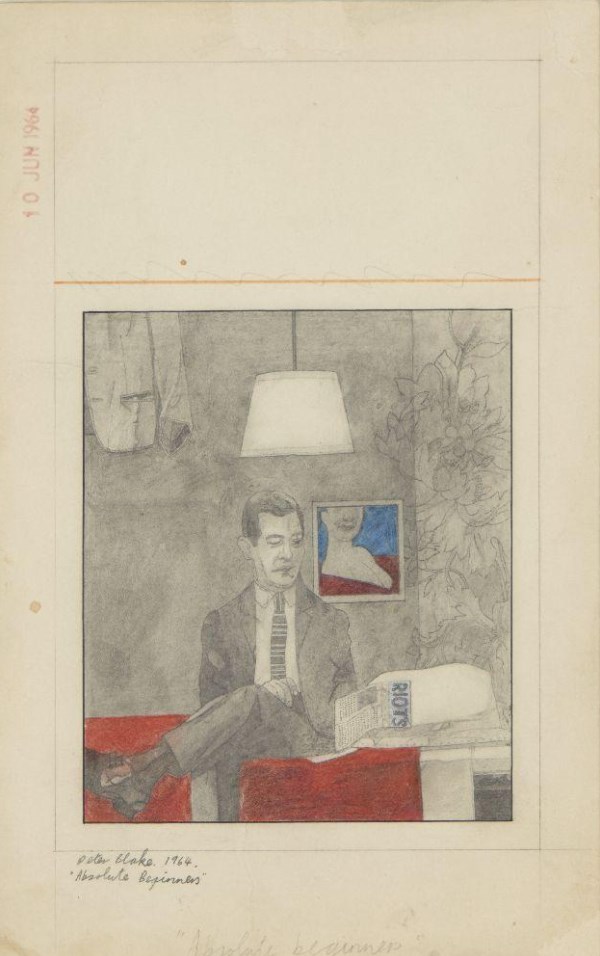 Lot 82, a crayon and pencil on paper executed by the iconic British artist Sir Peter Blake CBE RDI RA, in 1964, titled ‘Absolute Beginners’ made £6,875. This work was illustrated on the front cover of Colin MacInnes 'Absolute Beginners' (included on the back), the inspiration for the 1986 film by Julien Temple, staring David Bowie, Eddie O'Connel and Patsy Kensit. Peter Blake was a central figure in the British Pop Art scene of the 1960s, best-known for co-creating the cover artwork for The Beatles’ Sgt. Pepper’s Lonely Hearts Club Band. 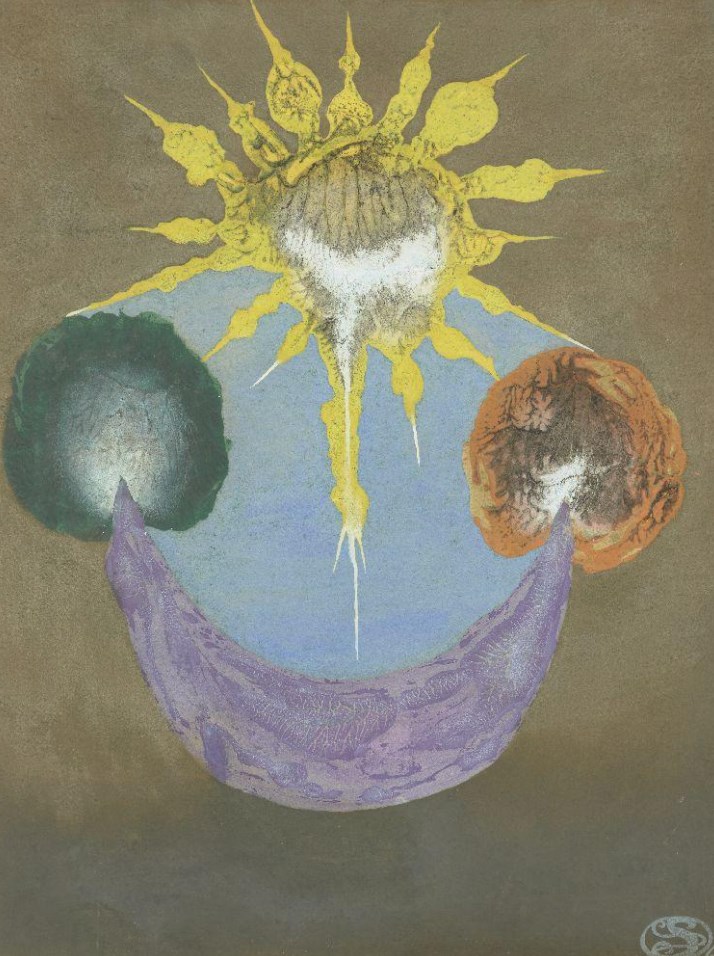 The oil on paper artwork by Ithell Colquhoun, (1906-1988) titled ‘Day Star II’ conceived in 1964, made £6,000 at auction, making it the highest price for a work on paper by the artist. Initially estimated to make £1,500-£2,500, the signed with monogram and dated lower right artwork measuring 64', 44 x 33.5 cm came with a strong provenance. Ithell Colquhoun was a British painter, occultist, poet and author. Stylistically her artwork was affiliated with surrealism. In the late 1930s, Colquhoun was part of the British Surrealist Group before being expelled because she refused to renounce her association with occult groups. 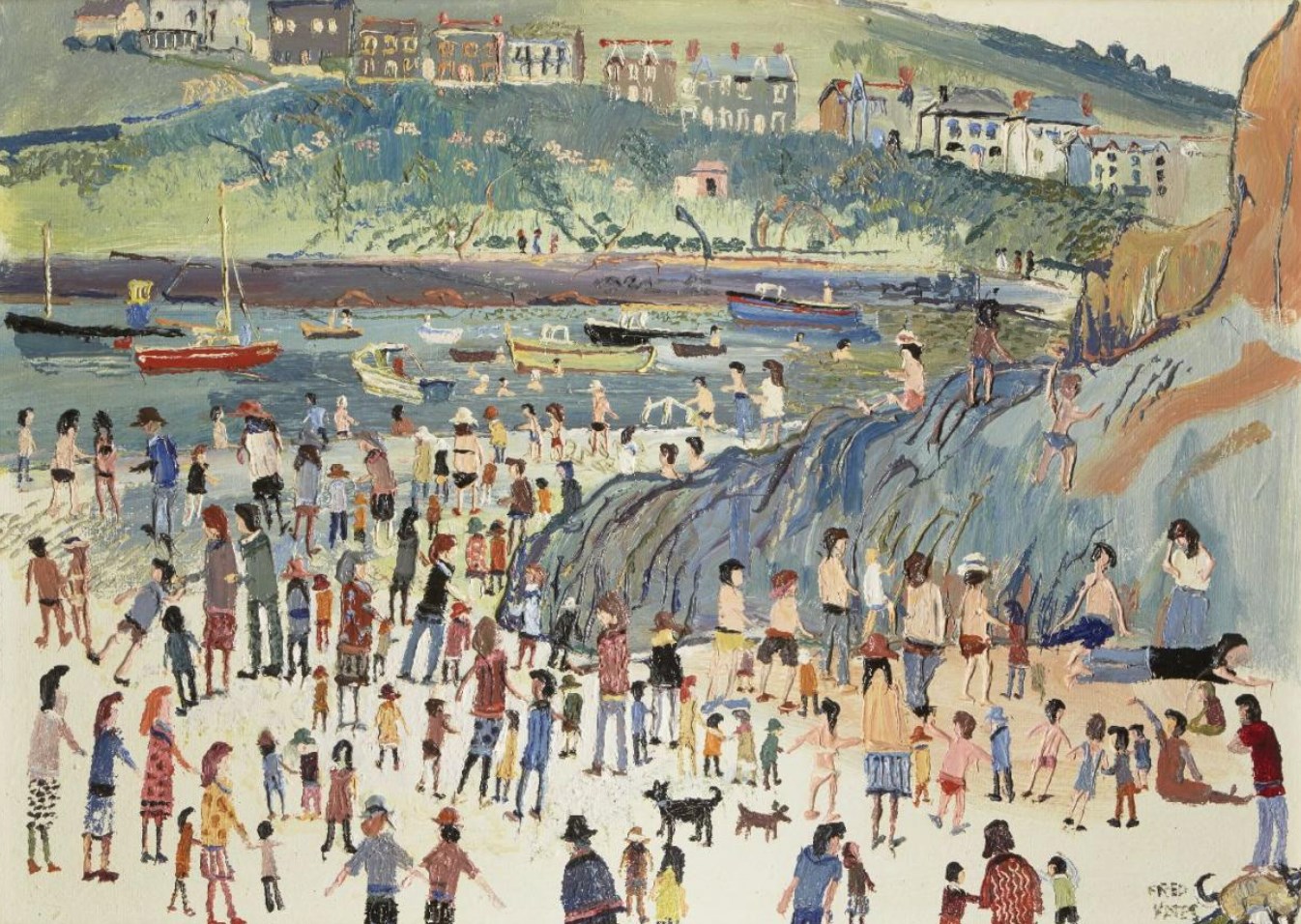 Fred Yates, British 1922-2008 - Busy Harbour Scene (with a Landscape scene on the reverse of the board); oil on board

Elsewhere in the sale, all fourteen works (lots 145-158) by the much-loved artist Fred Yates, from the same collection ,  sold over the high estimate, a fantastic achievement for such a large group of works. The previous owner of the collection knew the artist well and so, in each of these paintings he depicted the owner’s Siamese cat. The full collection of works made the grand total of £39,375. Lot 157 pictured above, was highlight sale from the group on offer, an oil on board, ‘Busy Harbour Scene’ making £4,250.