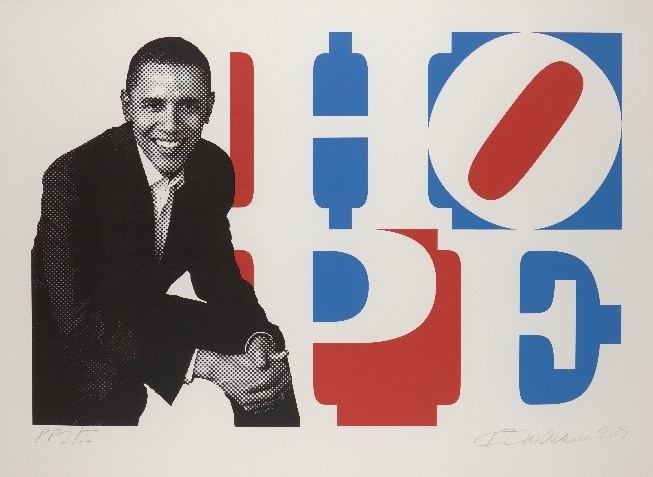 412 lots are on offer in the final Modern & Contemporary Prints & Multiples auction of the year at Roseberys, which will take place on Tuesday 2 November, starting at 10.00am. Offered is a wide range of modern and contemporary editions from lithographs and screen-prints to contemporary photos and special edition sculptures. An Americana theme runs prominently throughout the auction, with five artworks by Andy Warhol on offer, elsewhere in the sale are works by other noteworthy American artists such as Robert Indiana, KAWS, and Daniel Arsham. 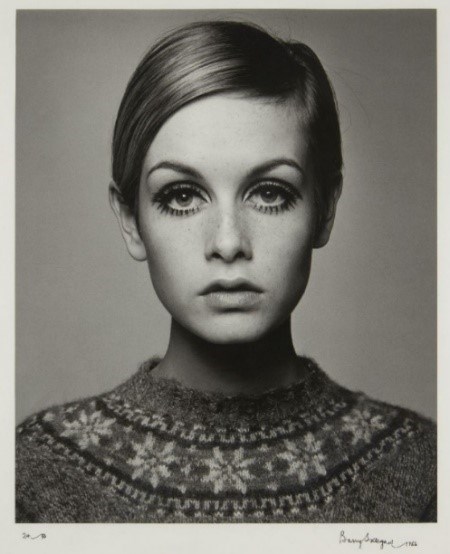 Ed Plackett, Head of Department comments: ‘We have a large sale of just over 400 lots, comprising prints from Whistler through to Picasso, Matisse and Dali then on to Lowry and Modern British including Hockney, Piper, Frost, Emin and Hirst. We have a strong Asian section with works by Kusama and an Australian group of Nolans and Boyds. We also have a good pop art selection, with prints by Blake, Warhol and then leading on to an urban art section with Banksy and a good diversity of works by the Connor Brothers and Harland Miller. In addition, we have a photography section with names like Doisneau, Eve Arnold, Barry Lategan and Terry O’Neill. Truly there is a print or multiple for all tastes in this auction.’ 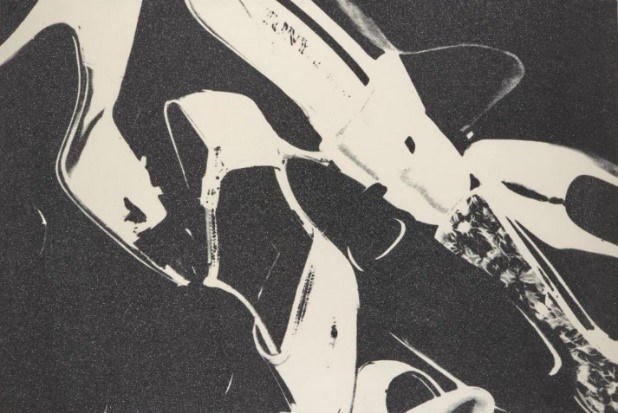 The highlight of the sale is lot 187 by Andy Warhol - Shoes (Black and White) [Feldman and Schellmann II. 255], 1980; screenprint with diamond dust on Arches wove. This work is offered to the market with an estimate of £80,000- £100,000, from the edition of 60 and signed and numbered in pencil verso. A leader of the Pop Art movement, Warhol is today remembered most prominently for his pioneering silkscreen prints, which came to define the accessible art movement in the Sixties. Long before the Campbell’s soup cans, the Marilyns, and the Maos, there were shoes. Women’s shoes are a strong theme throughout Warhol’s oeuvre, originating from his time as an illustrator for the likes of Vogue and Harper's Bazaar, and as a shoe designer for I. Miller and Sons. For this work he was hailed by Women's Wear Daily as "the Leonardo da Vinci of the shoe trade." Warhol's Diamond Dust Shoes series in particular was originally an advertisement campaign for his friend and fashion designer Halston. Inspired by a box of shoes that were tipped on the floor by Halston’s partner, Warhol liked the way they looked. He then took Polaroids of shoes laid out on white sheets of paper in a similarly haphazard arrangement, which he used as a guide to create the screen-prints. The diamond-dust idea was taken from Rupert Smith, the painter and printmaker who worked as Warhol's art director, who had been using the industrial-grade ground-up stones on some prints of his own. The high-heels seen in this image fully embody the glamour and materiality of the United States in the 80s when this work was made.  Ed Plackett comments: ‘This large iconic black and white with diamond dust piece ties in with the glitter of the Peter Blake work ‘Sources of pop art’, which is also on offer within the sale, in terms of its reference to the glamour of the 70s and 80s icons and top brands. Great condition and well framed, these prints are rare on the market and with the continued interest in Warhol’s works this particular lot should do well.’ 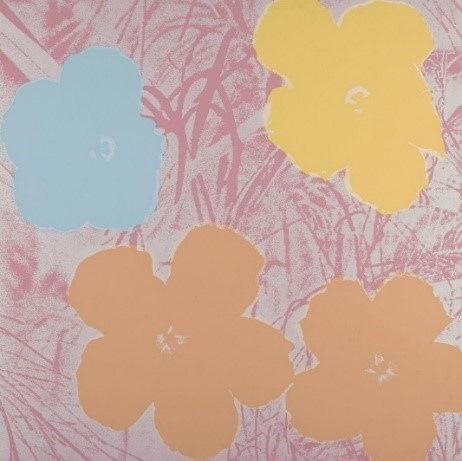 Another highlight Warhol on offer is lot 188, Flowers [Feldman and Schellmann II.70], 1970; screenprint in colours on wove, an unsigned proof aside from the edition of 250, printed by Aetna Silkscreen Products, published by Factory Additions, New York. The print measuring 91.4 x 91.4cm is framed and comes with an estimate of £32,000- £35,000. Instead of looking to the flowers in nature, Andy Warhol found his floral inspiration in a 1964 issue of Modern Photography. He transformed a photograph of hibiscus blossoms into a technicolour series of silkscreens, each simply titled ‘Flowers’ such as the lot on offer at Roseberys and debuted the work at the important Leo Castelli Gallery. At the time of the works inception, Flowers was a refreshing departure from Warhol’s prints addressing mass culture and brands. 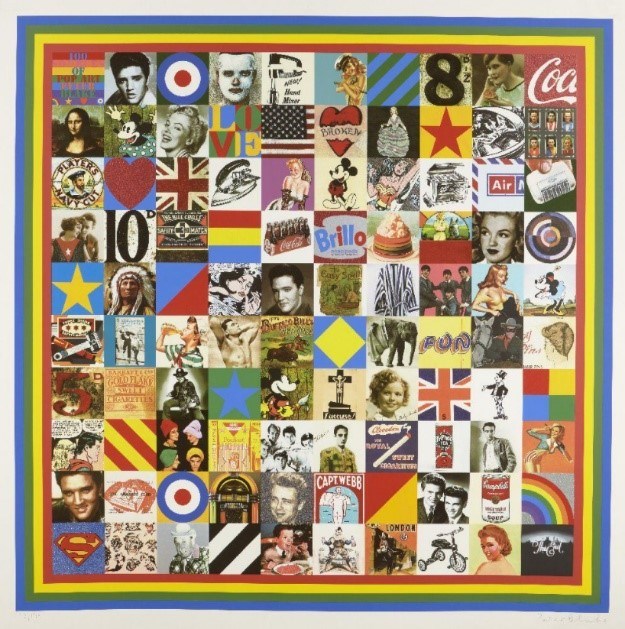 Elsewhere in the sale, also representing the Pop Art movement is work by British artist Sir Peter Blake CBE RDI RA, who is best known for co-creating the sleeve design for the Beatles' album Sgt. Pepper's Lonely Hearts Club Band. Lot 180, 100 sources of Pop Art, 2014; screen-print with glitter in colours on wove, signed and numbered 93/175 in pencil, published by CCA Gallery has been entered onto the market with an estimate of £7,000- £10,000. This lot is accompanied by a certificate of authenticity issued by CCA Gallery. Ed Plakett comments: ‘A playful look at many of the sources of inspiration for Pop Art, here displayed in a large size format and very collectible.’ 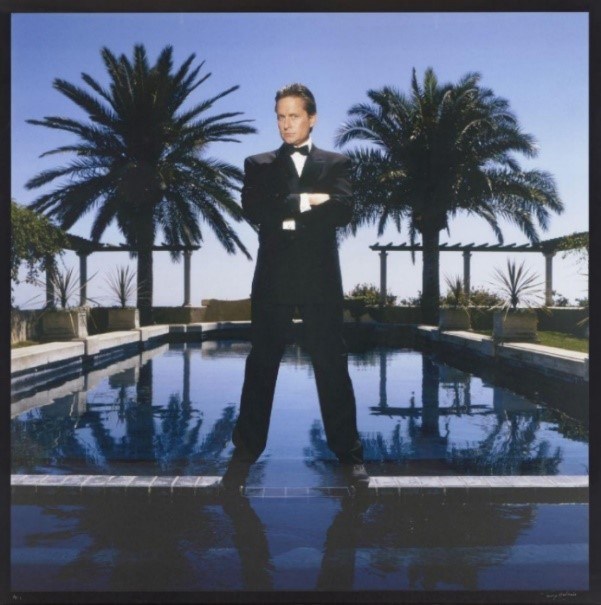 British photographer, Terry O'Neill, known for documenting the fashions, styles, and celebrities’ image of American actor Michael Douglas carries on the theme of Americana in the sale. The framed c-type on photopaper on offer is signed and inscribed AP/1 in silver ink, sheet measuring 182 x 182cm was shot and printed in 1988. This was the largest size of this shot of Michael Douglas produced by Iconic Images, LA, and shows the actor at the height of his fame having just starred in films such as Wall Street and Fatal Attraction. This work comes with a pre-sale guided price of £20,000- £25,000. 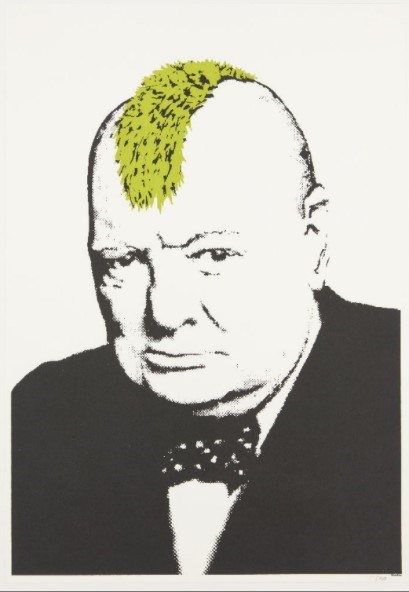 Ten works by Banksy are included in the auction, with lot 341, Turf War, 2003; screenprint in colours on wove, being the highlight. The framed print is numbered from the edition of 750 in pencil, with Banksy copyright printed lower right, published by Pictures on Walls, London, sheet 50 x 34.9cm.  This lot comes with a Certificate of Authenticity, issued by Pest Control, 7th July 2021. The screenprint, on offer at Roseberys, was debuted originally in 2003 at Banksy’s Turf War solo exhibition in a warehouse on East London’s Kingsland Road. The original portrait of Churchill, titled The Roaring Lion, was taken by Armenian-Canadian photographer Yousuf Karsh in the chamber of the Speaker of the House of Commons in the Canadian Parliament, after Churchill delivered a speech on World War II in 1941. Ed Plakett comments: ‘A less common print by Banksy, with a playful take on Churchill.’ 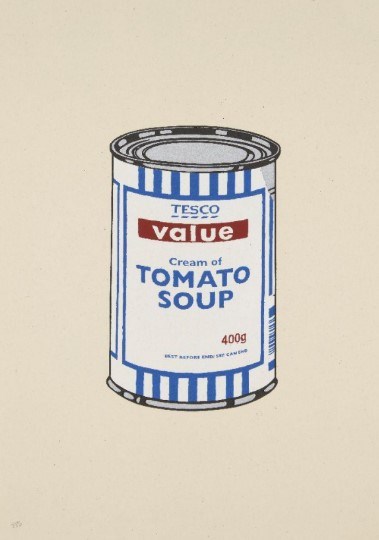 Banksy, British b.1974- Soup Can- Original Colourway, 2005; screenprint in colours on wove

Lot 342 on offer is Banksy’s Soup Can in the original colourway, 2005; screenprint in colours on wove, numbered from the edition of 250 in pencil, published by Pictures on Walls, with their blindstamp, sheet 50 x 35.3cm. This work that has an estimate of £30,000- £40,000, is accompanied by a Certificate of Authenticity, published by Pest Control, 15th January 2019. Banksy’s Soup Can is noticeably inspired by Andy Warhol’s famous 1962 series of Campbell’s Soup Can artworks. Different to Warhol’s homage to the boundlessly reproduced images of consumer society, the print on offer evokes the vintage aesthetic of the quintessentially British Tesco’s value range. 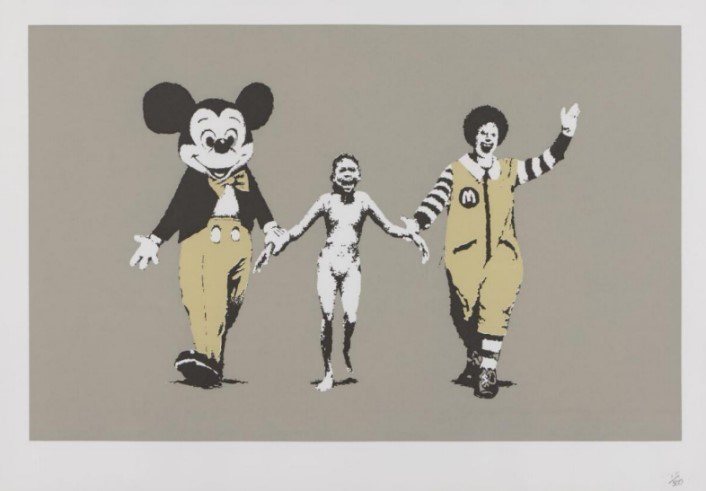 Coming with an estimate of £25,000- £35,000 is Banksy’s, Napalm, 2004; screenprint in colours on wove. Numbered from the edition of 500 in pencil, published by Pictures on Walls, with their blindstamp, sheet 50 x 70cm is framed and also accompanied by a Certificate of Authenticity, issued by Pest Control, dated 3rd June 2010. Lot 345 is a powerful print that reinvents the famous photograph The Terror of War, taken on 8 June 1972 by photographer Nick Ut during the Vietnam conflict. The following year, the photograph won both the Pulitzer Prize for Spot News Photography and the World Press Photo of the Year. Napalm is one of Banksy’s most moving works inspired by Ut’s prize-winning image. 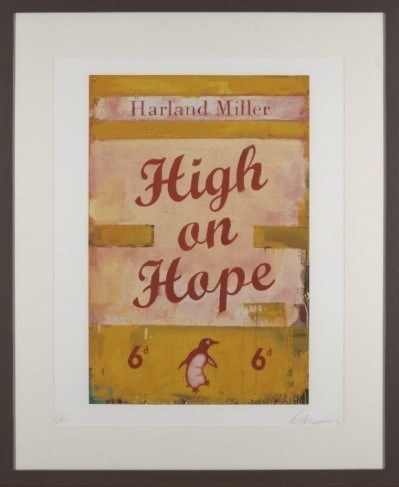 Lot 390 is another highlight by a British artist on offer. Harland Miller’s, High on Hope, 2019; screenprint in colours on 410gsm Somerset wove, comes signed and numbered 71/75 in pencil, printed by K2 Screen, London, published by Counter Editions, Margate. The framed image, measuring 67 x 44.5cm comes with an estimate of £22,000- £28,000. High on Hope’ (2019) is part of Miller's ongoing series of paintings and prints based on the dust jackets of Penguin books. 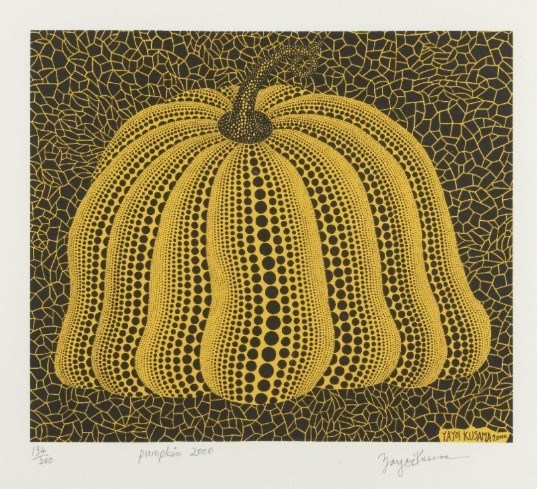 Highlighting the Asian prints on offer is lot 292 by Yayoi Kusama. Pumpkin 2000 (Yellow) [Kusama 298], 2000; screenprint in colours on wove signed, titled and numbered 134/200 in pencil, published by the Serpentine Gallery, London comes with an estimate of £20,000- £25,000. The sheet measuring 48 x 64cm is framed and comes with a provenance from the Serpentine Gallery exhibition, 2000, during which was gifted to the current owner. Yayoi Kusama has consolidated a name for herself for her genius and innovative work. To date she is one of the most highly sought-after artists of her generation. Her aesthetic is perhaps best typified by her yellow pumpkin art such as the lot on offer at Roseberys.