Seven Bronzes By Salvador Dali To Go Under The Hammer 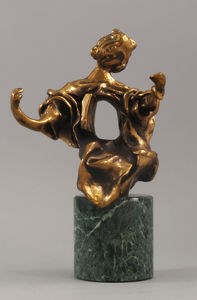 Seven bronzes by Salvador Dali will go under the hammer at Roseberys on 11 June.  The bronzes, from the renowned Clot Collection, have come from a private Scottish vendor.  Each one is signed and numbered.
The Clot Collection derives from the 1960s and 70s. Dali took to spending summer afternoons modelling the sculptures in wax by the swimming pool of his house in Port Lligat in Spain.  These were later cast in bronze by a friend of the artist, Isidro Clot, who ran the Diejasa foundry.
Modelling in wax means each sculpture actually bears the marks of Dali’s fingers and palms and this ‘lost-wax’ process is believed to produce the most superior casts.
The subjects of this series of bronzes derive from Dali’s abiding fascinations with Christianity, Spain and the nature of culture and his passion for his muse and lover, Gala.
Marcus Grey, Roseberys picture department director comments, “The Clot Collection has forty four works by Dali in total and we are delighted to present seven of these works in our forthcoming auction. They represent a good cross section of the subject matter and creative elements that Dali worked with and became famous for. The Dragon, Swan, Elephant bronze epitomises Dali’s surrealist vision by creating a work that appears tangible as one object but viewed from a different perspective appears to be something quite different.”

Dragon, Swan, Elephant, bronze, signed and numbered 2/19 PE, prestige edition, height 32cm, length 44cm, width 49cm.  Estimate £30,000-£40,000
Dali was famed during his surrealist period for making images which could be viewed in different ways.  This sculpture can be seen as an elephant, a swan or a dragon, depending on the angle from which it is viewed.

Saint Narcissus, bronze, signed and numbered 2/75 AP with marble plinth, height 28cm, length 17cm, width 14cm.  Estimate £2,500-£3,000
Legend has it that this Bishop of Gerona performed a miracle from beyond the grave in 1285.  As the city was being sacked by an army of non-believers, the saint released swarms of flies from his tomb which caused the soldiers to run away.

Customers unable to come to the auction in person can bid online at www.the-saleroom.com or phone Roseberys before the sale to leave a bid or book a telephone line.
The auction will be held at 10am on 11 June 2013 at Roseberys Auctioneers, 74-76 Knights Hill, London SE27 0JD.