Roseberys were delighted to present the second Jewellery & Watches auction of the year on Tuesday 8 June, that compromised 233 lots in total, ranging from charm bracelets, and designer watches, to diamond rings.

Mark Bowis, Head of Department commented ‘The sale was very strong, attracting both UK and international interest. Bidding was strong in all categories with antique and vintage jewellery performing particularly well. It was encouraging to see that diamonds were fetching very competitive prices. The sale results showed a 78% sold rate proving that the market is robust.’ 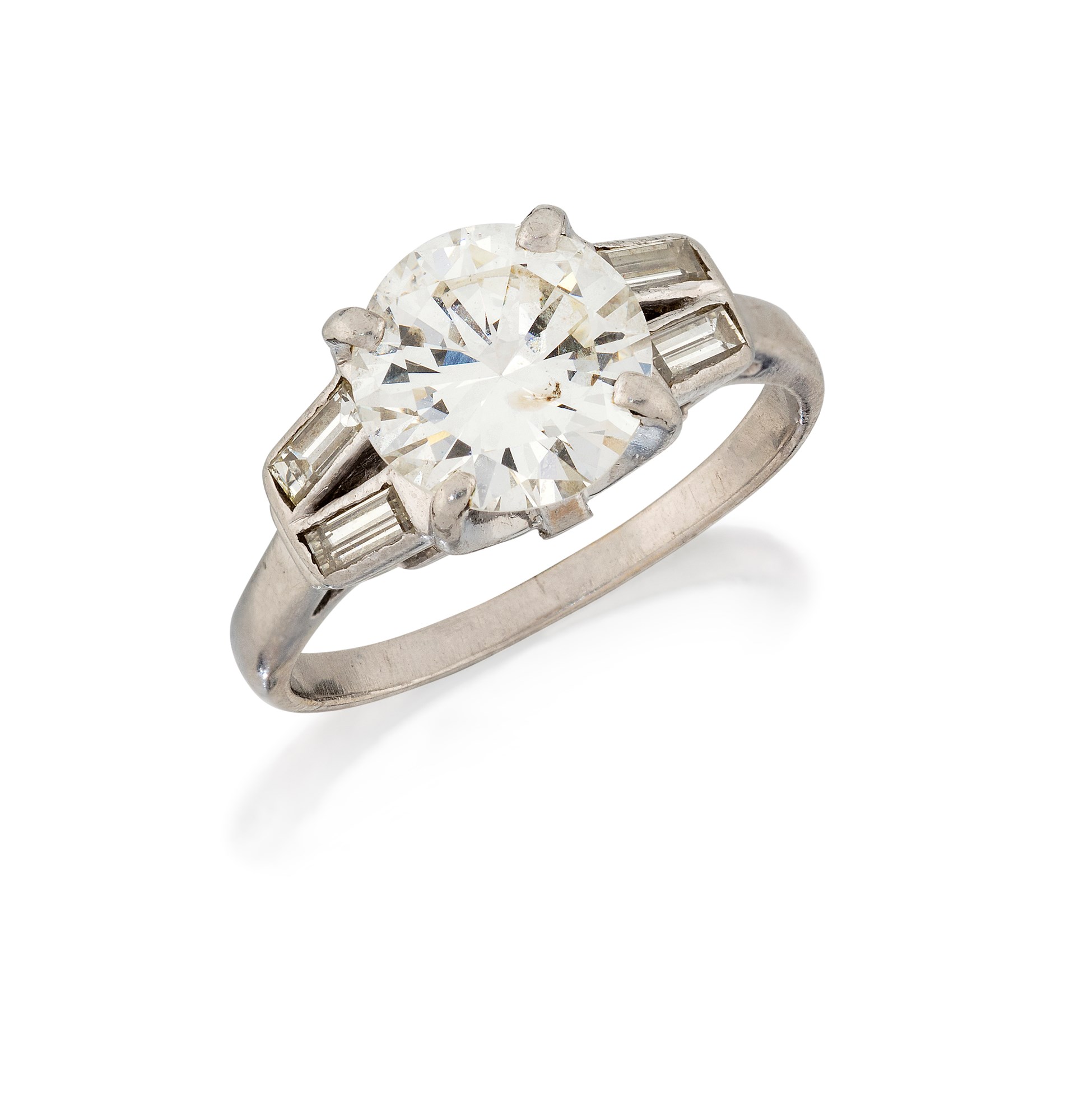 Leading the highlights within the sale was lot 230, a platinum, diamond single stone ring, the brilliant-cut diamond, weighing approximately 2.10 carats, in four claw mount to baguette-cut diamond two stone shoulders. Against a pre-sale estimate of £2,500-£3000 the ring went to a RoseberysLive online bidder for £6,875. Mark Bowis commented ‘The market for diamonds appeared very strong, especially with the pre-sale interested and the competing for this ring.’ 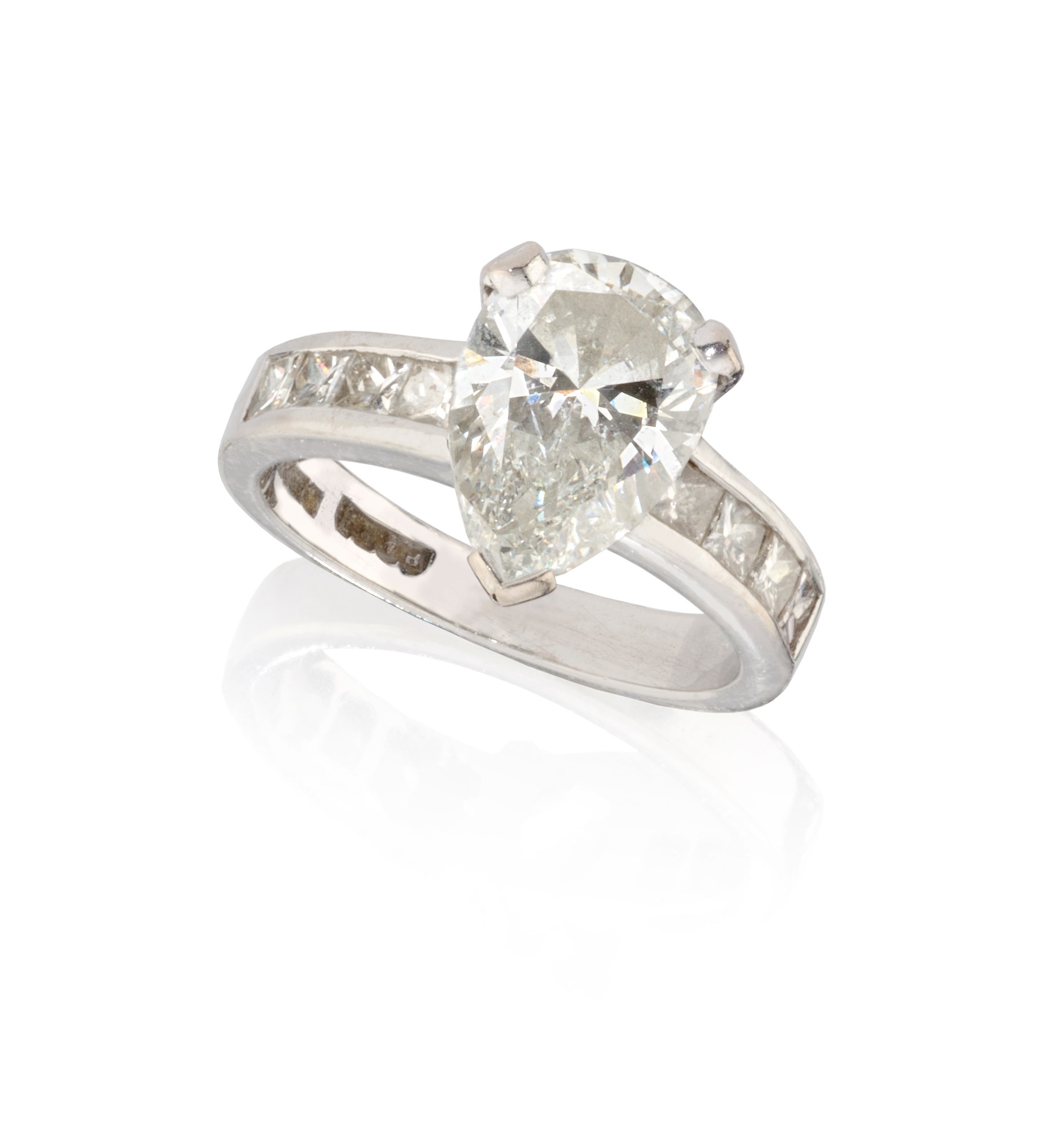 Another diamond ring and the last lot of the sale, lot 233, also made the price of £6,875 against a pre-sale estimate of £2,500-£5,000. The diamond single stone ring, with a pear-shaped diamond, weighing 2.60 carats, to princess-cut diamond four stone shoulders, mounted in 18ct white gold, London hallmarks, 2004, went to a RoseberysLive online bidder based in London. 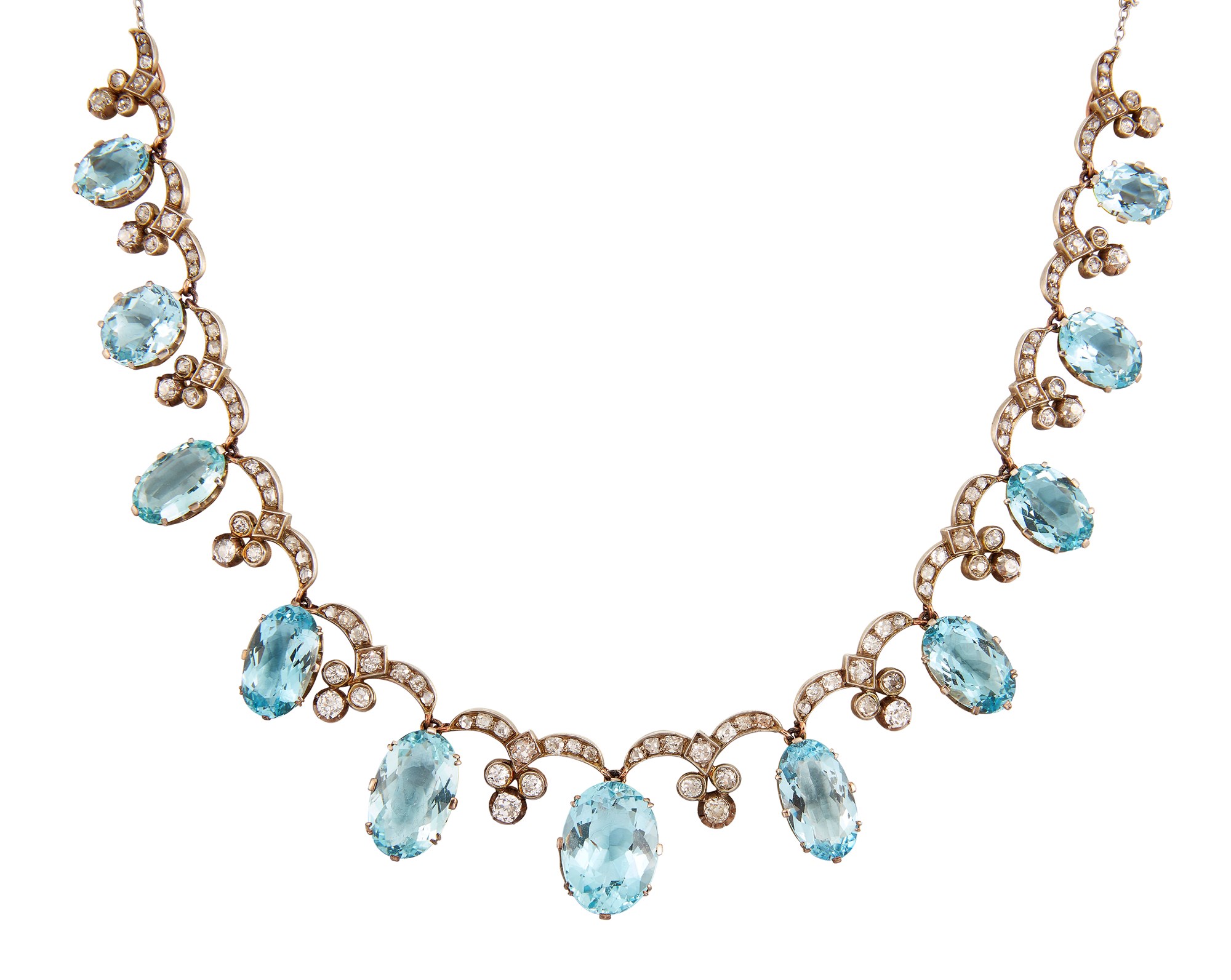 Within the group of necklaces on offer was lot 229, a late 19th century aquamarine and diamond necklace. Mounted in gold and set with a fringe of aquamarines with diamond swag divisions it had an estimate of £3000-£5,000 and was finally chased up to £6,875, going to a phone bidder in the UK. 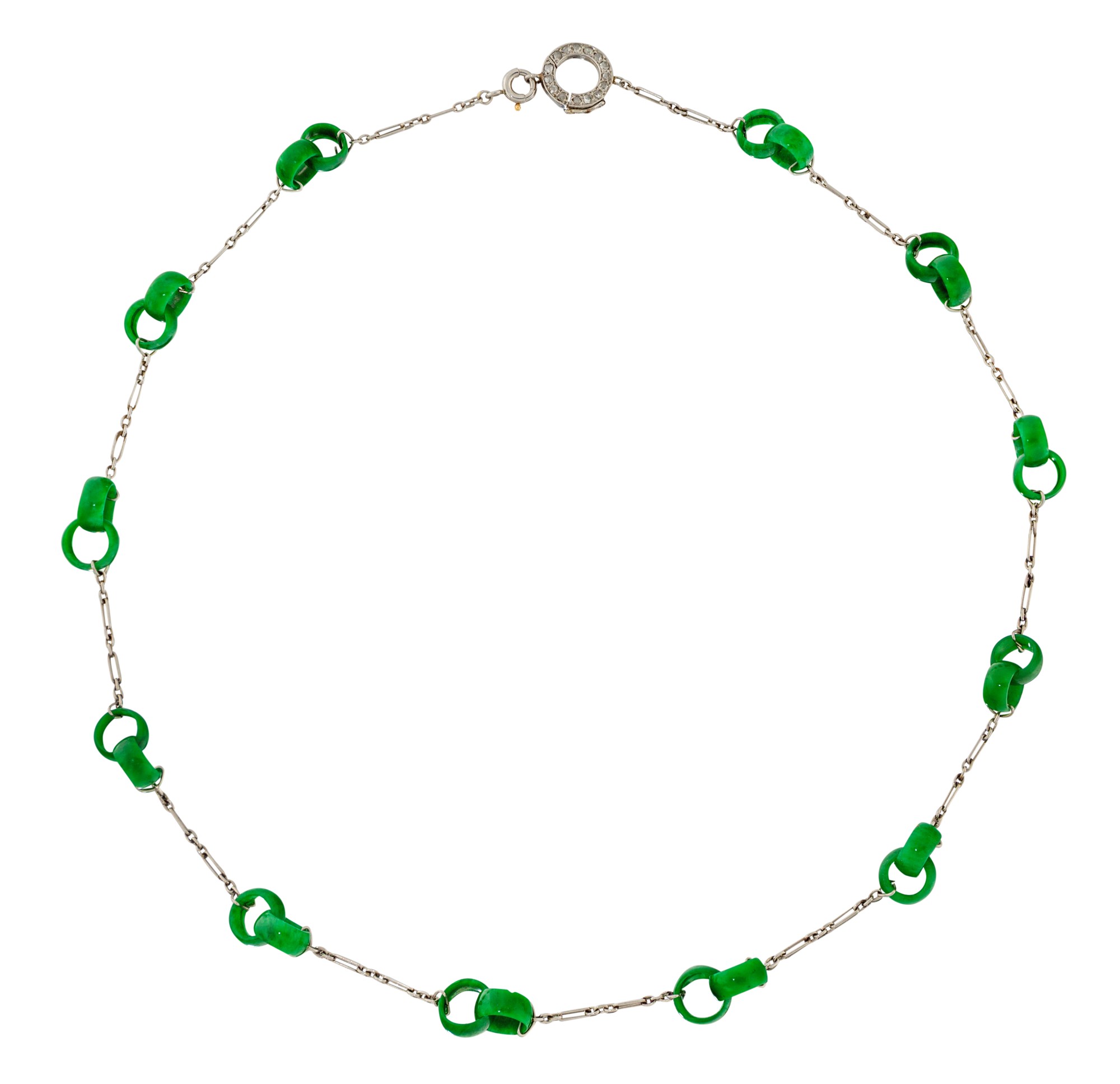 Another necklace offered within the sale with an enticing estimate of £600 - £800 was lot 216. The charming Belle Epoque platinum-set Jadeite necklace certainly did not go unnoticed, and gained a lot of pre-sale and auction day attention. The necklace went to a lucky phone bidder for £3,125. 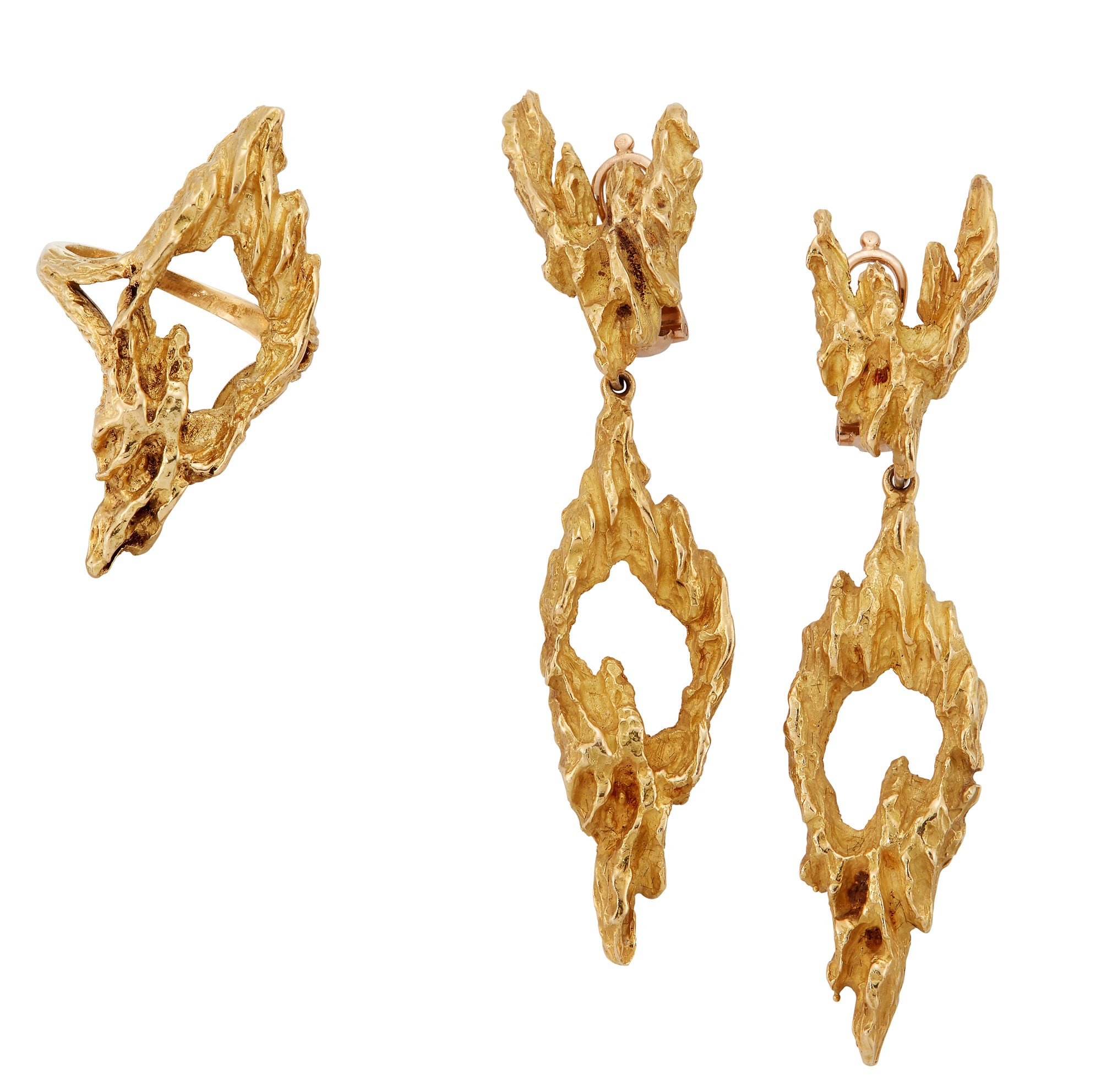 An 18ct gold ring and pair of earrings by Chaumet

For collector’s of 1970s jewellery, included in the sale was a suite of Chaumet jewellery (lot 222). This was a great example of the abstract inspired pieces of this decade and from a premium jewellery house. Estimated at £2000-£3,000, the group realised £5,000 to a RoseberysLive online bidder. 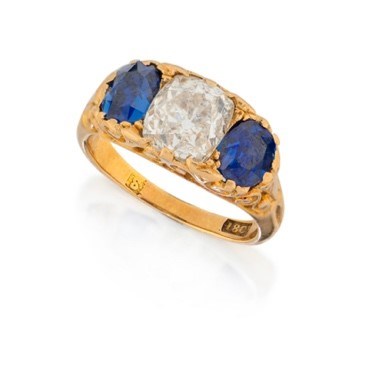 Rings performed very well and one stand out was a Victorian diamond and sapphire ring, set with a lovely old-mine cut diamond and set off by deep blue well saturated colour sapphires (lot 219). With an estimate of £1,500-£2,000 the final bid went to a phone bidder for £3,000. 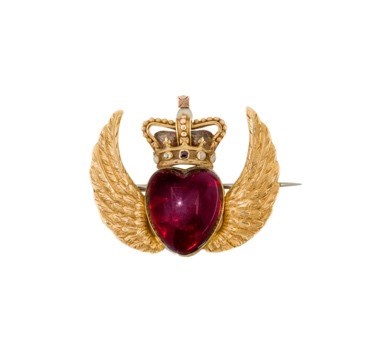 Lot 59 was a Victorian gold and garnet brooch, an interesting historical jewel. Retailed by an Edinburgh jeweller, the brooch was in the form of a winged heart-shaped cabochon garnet with crown surmount and came complete with its original fitted case. This lot far exceeded the presale estimate of £300-£500 to realise the price of £1,500 – going to a RoseberysLive online bidder based in Northern Ireland.  The symbolism of this brooch is inspired by an incident during the life of Robert the Bruce. According to Jean le Bel, in 1329 when Robert the Bruce lay dying he asked his friend Sir James Douglas ('Good Sir James') to carry his heart to the Holy Land and present it to the Holy Sepulchre in Jerusalem as a mark of penance. Douglas took the heart with him to Spain when campaigning against the Moors. When he found himself surrounded by the enemy during the Siege of Teba, before being killed, Douglas threw the heart among the enemy in a gesture of defiance. Subsequently the crowned heart has remained incorporated into the Douglas Coat of Arms. 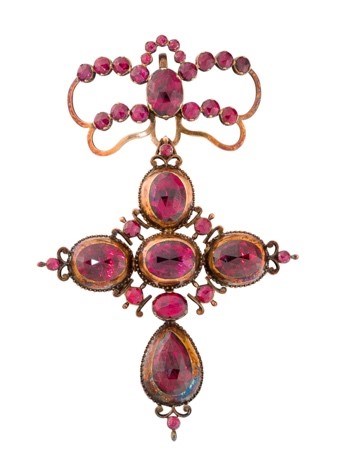 Another historical piece that attracted bidders was a late 18th century Iberian foiled garnet cross pendant, lot 58. This was in extremely good condition, with a very bright appearance. With an estimate of £500-£700, the pendant went to a phone bidder for £3,125. 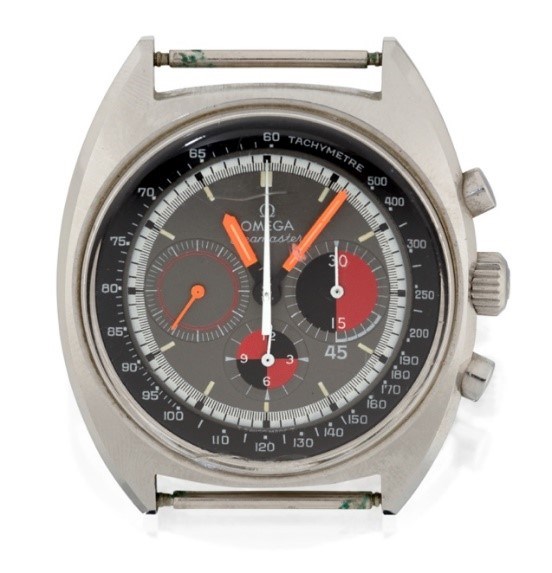 With vintage Omega wristwatches becoming increasingly desirable, among the selection of wristwatches offered in the sale was a 1960’s Omega Seamaster ‘Soccer Timer’ Chronograph wristwatch ref. 145.016-68 (lot 102). This watch with its uniquely coloured dial was a must for Omega collectors and football fans alike. This had an estimate of £1200-1600 and finally realised £2,375.