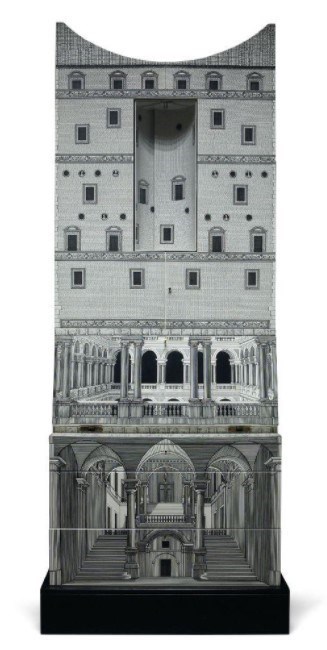 ROSEBERYS LONDON: On Tuesday 27th April Roseberys are proud to present the first of the bi-annual Design: 1860 to the Present Day auctions. The highly anticipated auction embraces Decorative Arts including the Arts & Crafts Movements and the Art Nouveau and Art Deco periods, encompassing 269 lots in total. 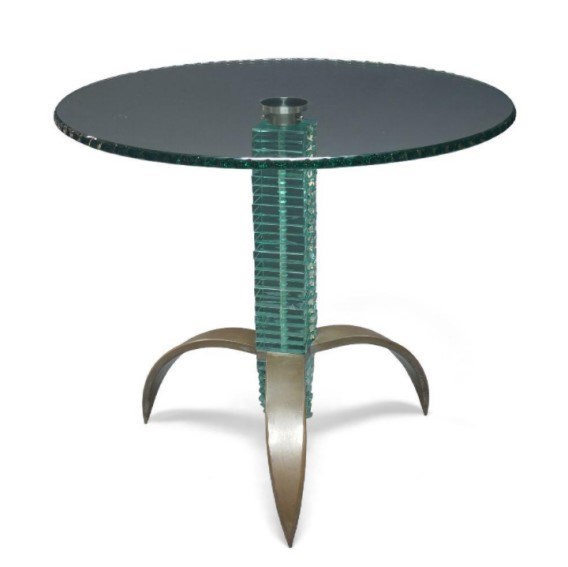 Danny Lane (American B.1955), a glass and bronze centre table

Fiona Baker, Head of the department commented: ‘We are delighted to announce that the 27th April auction ‘Design: 1860 to the Present Day’ will be having viewing by appointment and we look forward to saying ‘hello’ again to our many clients, albeit from behind a mask!  We have a selection of Arts & Crafts including works by Christopher Dresser, Voysey, Archibald Knox, Punnett, Liberty & Co and The Guild of Handicraft. The Art Nouveau movement is represented by Majorelle, Gallé, Zsolnay, Amphora, and Loetz amongst others. In Post war design, highlights include a collection of striking pieces by Piero Fornasetti, as well as works by Charles and Ray Eames. Also on offer is a broad selection of 1990’s and contemporary design including works by Danny Lane, Mark Brazier-Jones and a unique coffee table by Tom Dixon.’ 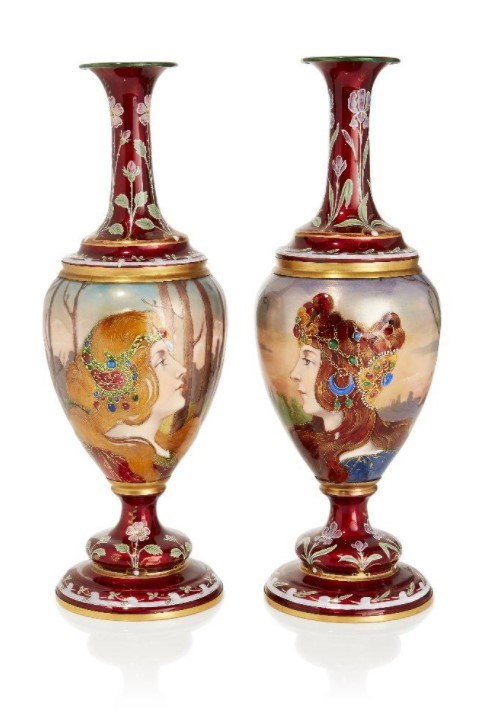 Leading the highlights in the sale with an estimate of £6,000-£8,000 is a pair of Art Nouveau polychrome and translucent enamel painted copper vases, created in 1900, by French artist and maker Théofile Soyer (1853-1940). Each of baluster form and decorated in coloured enamels with a portrait head of an Art Nouveau maiden, one with golden-brown hair, the other with darker red-brown hair, both wearing be-jewelled headdresses, each set against a wooded landscape. The rich red enamelled neck and circular spreading bases are painted with flowers and leaves, one with stylised roses the other with irises. The interior of the necks are enamelled in a dark green and each have a brass covered base, equally measuring 29.5cm high. Fiona Baker commented on the highlight lot within the sale: ‘The enamelled vases by Théofile Soyer are lovely quality and show the art of the enamellist at its best.’ 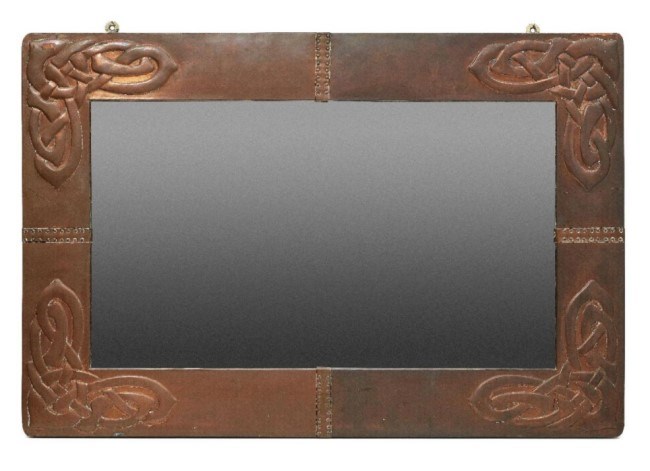 Elsewhere, coming with an estimate of £2,000 - £3,000 is a copper wall mirror, created in 1900 for Liberty & Co by Archibald Knox (1864-1933).  The Manx designer is best known as being Liberty's primary designer at the height of their success and a large influence upon UK and International design. Knox's pioneering and prolific work bridged the Arts and Crafts Movement, Celtic Revival and Art Nouveau. The mirror that measures 61cm x 91cm is of rectangular form, made with copper over wood and is embossed with a Celtic design of entwined entrelacs, with riveted sections and has brackets ready for hanging on your wall. 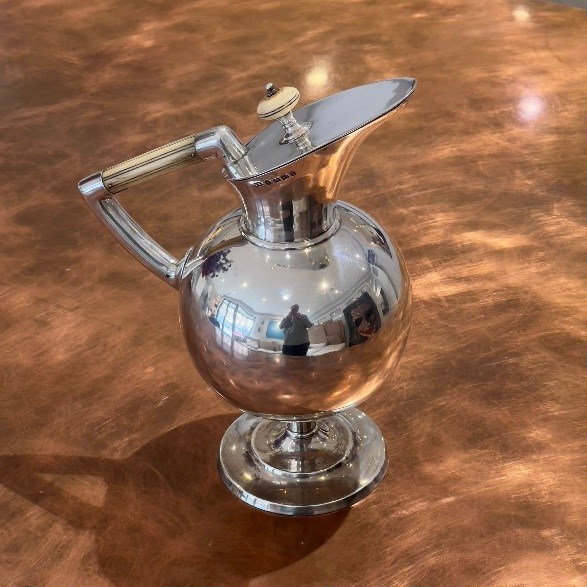 Offered onto the market with an estimate of £800 - £1,200 is an electroplated articulated letter and or toast rack, designed by Dr Christopher Dresser (1834-1904) made by Hukin & Heath. Dr Christopher Dresser was a British designer and design theorist, now widely known as one of the first and most important, independent designers to date. Many of his designs can fairly readily be placed in the context of the orientalising and historicising taste of the day, but his metalwork designs stand out as almost impossibly austere for the high Victorian era. In the 1870s and '80s he composed arresting geometric shapes, such as the lot on offer, that are often seen as harbingers of Modernism. The rack measures 12.4 cm high and 17.5 cm wide when open and has the mark of Hukin & Heath, numbered 2555, stamped registration lozenge for 1881. 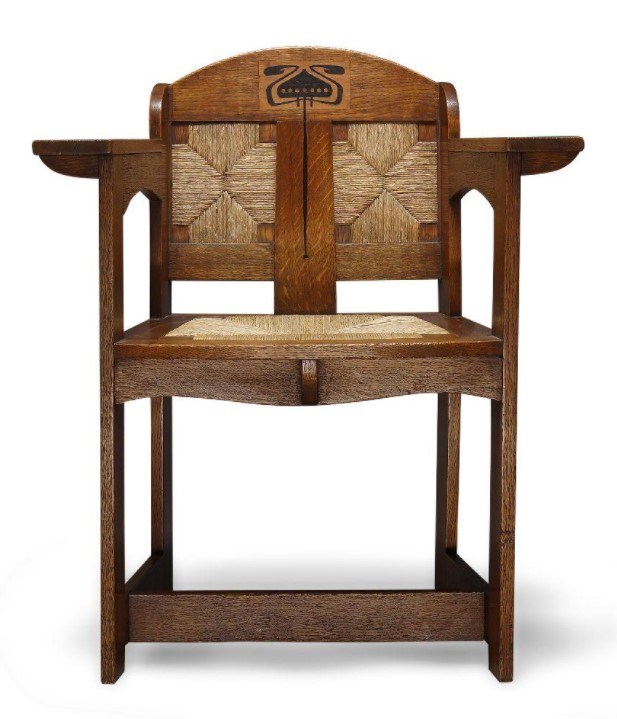 Coming from a private collection is an Art & Crafts inlaid oak and rush seated arm chair designed by E.G. Punnett, created in 1901 for the High Wycombe based firm of William Birch who retailed through Liberty & Co. Of architectural form, the design perfectly fits Punnett's design principles, sturdy yet delicate with true architect belief, making it a chair for the true design purist. A similar chair can be found in The Victoria & Albert Museum. This chair comes with an estimate of £1,500- £2,000. 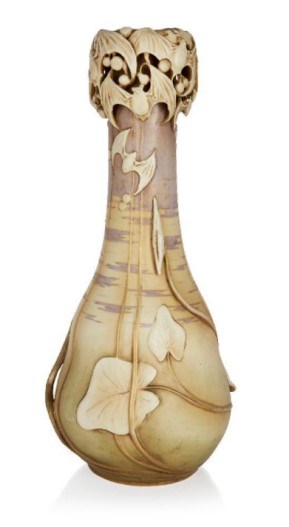 A tall ‘Amphora’ ceramic Art Nouveau ‘Bat and Berry’ vase, measuring 53.5cm high, designed by Paul Dachsel and made by Reissner, Stellmacher & Kessel in 1901, is being offered to the market with an estimate of £8,000 - £10,000. Rendered in a palette of mauve, cream, yellow and green, with gilt highlights, Amphora’s Berry Bat Vase has a broad reticulated neck carved with bats and berries, further embellished with three bats and slender stems in shallow relief, and lily pads and stems in high relief to the body. The bat was a popular motif of Art Nouveau style. The vase is printed with red factory marks, impressed Amphora in an oval, and with impressed numbers 668 41. Paul Dachsel was the son-in-law of Alfred Stellmacher, the founder of Amphora Pottery company in Turn-Teplitz, then in Austria. He served as a designer at Amphora from 1893 until 1905. There, he was instrumental in creating new motifs and designs inspired by the voluptuous, organic Art Nouveau style, as well as incorporating Japanese shapes, such as the sake bottle, to a traditional Victorian vase body. In 1905, Dachsel founded his own pottery studio, Kunstkeramik Paul Dachsel. He continued to draw inspiration from Art Nouveau and created designs that favoured simple forms elaborated with applied handles, rims and ornaments. In many examples, he favoured tertiary colours and folded, flat, and soft-edged shapes, giving his work a fairy-tale quality, such as the lot on offer at Roseberys. 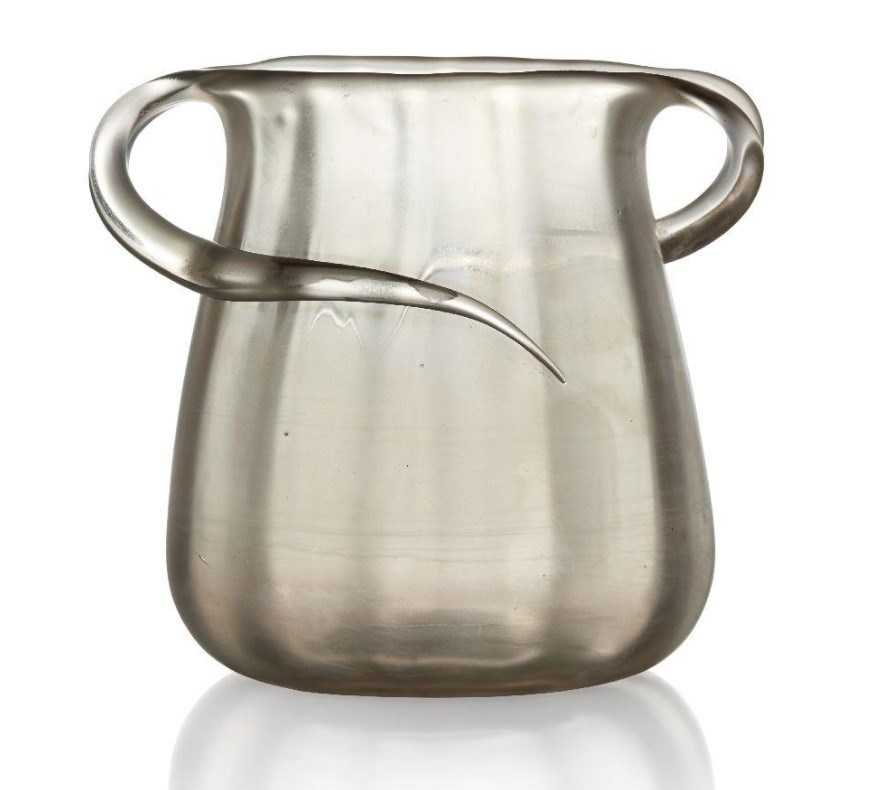 On offer with an estimate of £800 - £1,000 is a Loetz iridescent twin-handled glass vase by Czech designer Maria Kirschner (Czech 1852-1931) created in 1903. Kirschner was famed for her post Art Nouveau forms, often with handles, with a preference for restrained décors and clear glass in pale iridescent hues, such as the lot on offer. Measuring 12.5cm high and 13.3cm wide, this particular vase is engraved with a monogram with two stars. 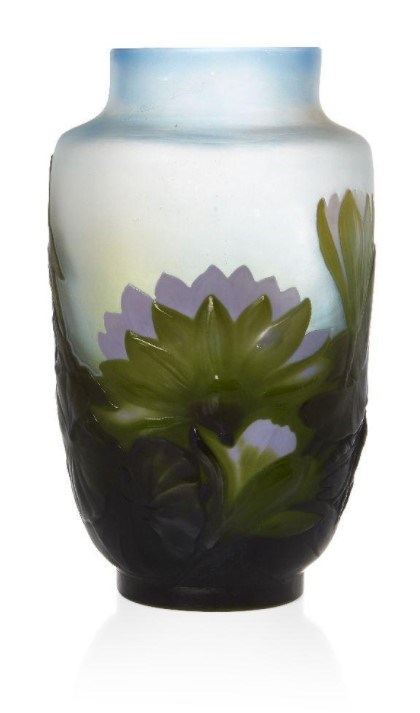 
A highlight of vibrant glassware on offer, accompanied with an estimate of £2,000 - £3,000, is a mould-blown triple overlay ‘Water Lily’ vase from Gallé created in 1925. Measuring 25.5cm high, the vase of elliptical section and mould-blown, has a blue body overlaid in mauve, green and black and acid-etched in the round with waterlilies, buds and partly furled leaves and lily pads. Founder of Gallé, nineteenth-century glassmaker Emile Gallé was famous for his dramatic evocations of nature. Gallé explored widely ranging techniques that included historical methods such as cameo cutting, acid etching, engraving, enamelling, and mould blowing, such as the lot on offer that was made after his death. 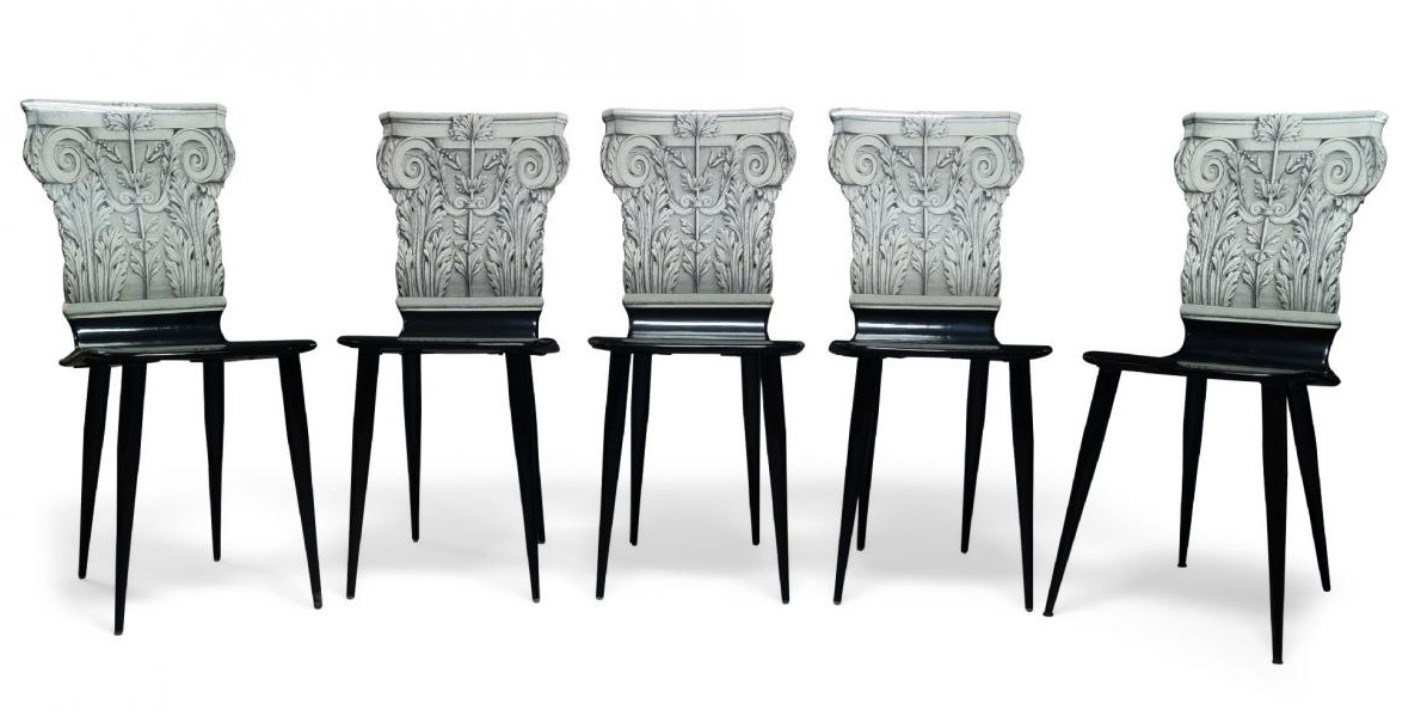 Included within the furniture section of the sale (lots 239-246) are eight striking design pieces by Piero Fornasetti (1913-1988) from a private collection. Highlighting the collection is a set of five opulent 'Capitello Corinzio' chairs by the renowned Italian designer. Beautifully crafted from wood, the chairs feature printed Corinthian capitol design back rests which are perfectly contrasted by the striking tapered legs. All the chairs in this come with paper labels to underside reading - 'Fornasetti, Milano, Made in Italy'.  This set of chairs which combines elegance with whimsical charm are typical of Fornasetti’s iconic style. The group come with an estimate of £3000- £5000.

A more modern item of furniture created circa 1989, is a prototype cherry wood and patinated steel coffee table, by British designer Tom Dixon (B.1959). The table that measures 38cm high, 142cm wide and 56cm deep comes with an interesting provenance. This prototype coffee table was designed by Tom Dixon in the late 1980's and made in the workshop of Windmill Furniture, also known as Isokon Plus, which was then based in Chiswick. After this original prototype, approximately thirteen tables were subsequently produced with some details changed and sold to Joseph shops. Today Dixon is well known for his lighting, accessories and furniture and his works have been acquired by museums across the globe, including the Victoria and Albert Museum, Museum of Modern Art New York and Centre Georges Pompidou in Paris. He began his career in the eighties, welding salvaged steel into radical furniture. To date he has grown more in popularity worldwide. The restless innovator has constantly reinvented himself through a series of different design lives, making owning such an iconic piece from the beginning of his oeuvre even more special. This table comes with an estimate of £2000-£3000. 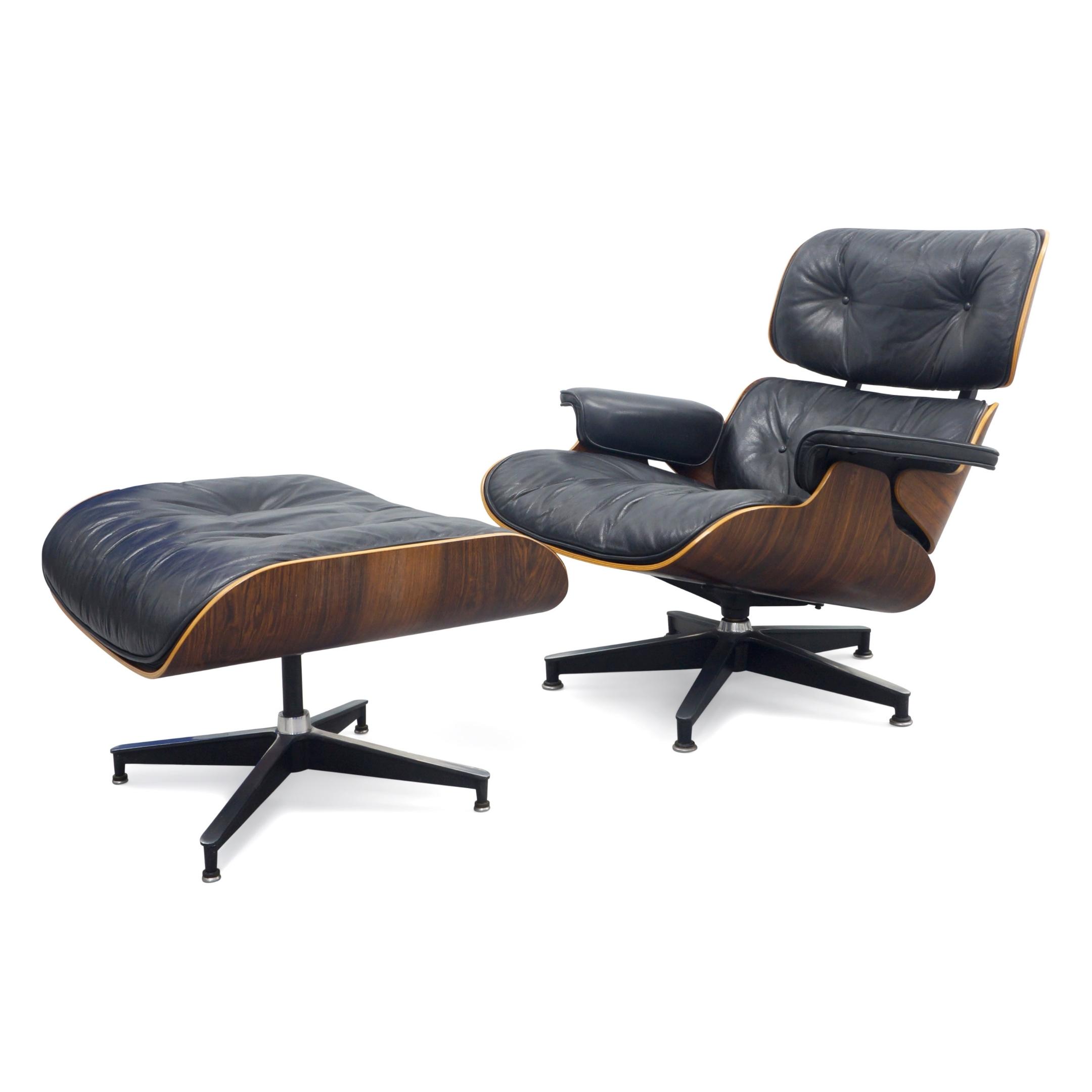 On offer with an estimate of £2,500- £3,500 is a '670' lounge chair and '671' ottoman by Charles and Ray Eames, created circa 1970 for Herman Miller. 'Why don't we make an updated version of the old English club chair?', was the comment by Charles Eames that launched the development of the Lounge Chair. The aim was to please the desire for a sufficiently proportioned chair that combined ultimate comfort with the uppermost quality materials and craftsmanship. The armchair designed by Charles and Ray Eames in 1956 it is not only lighter, more elegant and more modern than the conventionally ponderous club chair, it is also more comfortable. Due to these qualities, the Lounge Chair became one of the most famous designs by Charles and Ray Eames and has achieved the status of a classic in the history of modern furniture. The chair and ottoman on offer at Roseberys, each bear a ‘Herman Miller’ label to underside. The chair and ottoman are complete with rosewood veneered shells and black leather upholstery, on aluminium swivel bases. 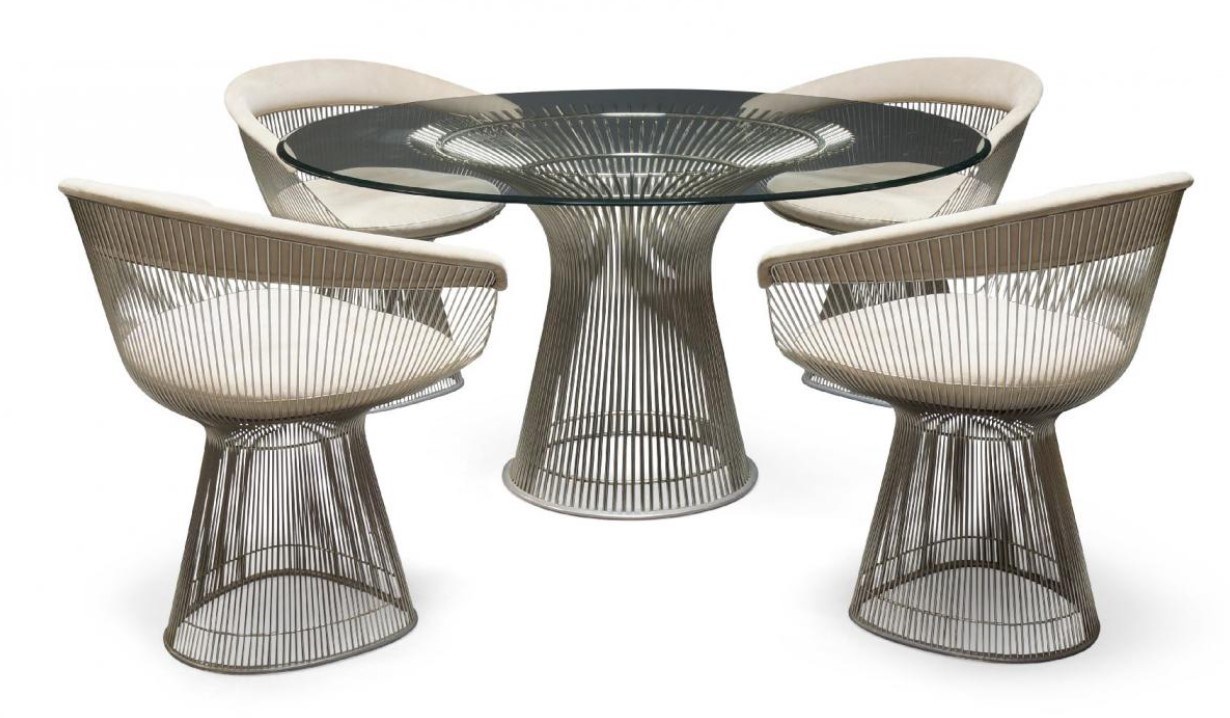 Rounding up the highlights on offer is a Platner dining table and four Platner armchairs for Knoll c.1980 by Warren Platner (1919-2006). The dining table with circular glass top, on nickel rod base, with four matching armchairs, have fawn coloured velvet upholstered armrests and seat cushions. Warren Platner was an American architect and interior designer. Platner’s furniture, has proved to be a continuing icon of 1960s modernism.  This collection of table and chairs comes with an estimate of £3,000-£5,000.


Viewing by appointment only contact decarts@roseberys.co.uk to book a time slot