Rare to the market : A Private Collection of Silver & Judaica

Roseberys London are proud to a bring a Private Collection of Silver & Judaica to the market on Wednesday 17 March, starting at 11am. The size and quality of this collection of scrolls and Judaica make this auction a very special event. The varied and impressive collection features an illuminated Book of Ecclesiastes scroll, several highly collectable Esther scroll cases by the Bezalel School, and numerous examples from across Europe, Israel and the former Ottoman Empire. There are also some lovely examples of contemporary Judaica silver including several pieces by Mila Tanya Griebel, whose work has been exhibited widely in Britain and the US, with a number of museums buying work for their permanent collections, a number of pieces by Hazorfim, and a large silver rose bowl by Graham K Arthur.

Peter Greenway, Director at Roseberys comments ‘We are thrilled to be selling this collection, it is one of the largest single owner collections of Judaica sold in the UK in the last few decades. It is unusual to see such a wide spectrum of Judaica in a single owner sale. The sale is split into categories including silver, scrolls, works of art, jewellery and watches, all ranging in prices. Another highlight within the sale is a collection of rare modern silver, made in the late 20th century. There is a growing market for all Judaica, so we are excited to see the results of this auction.’ 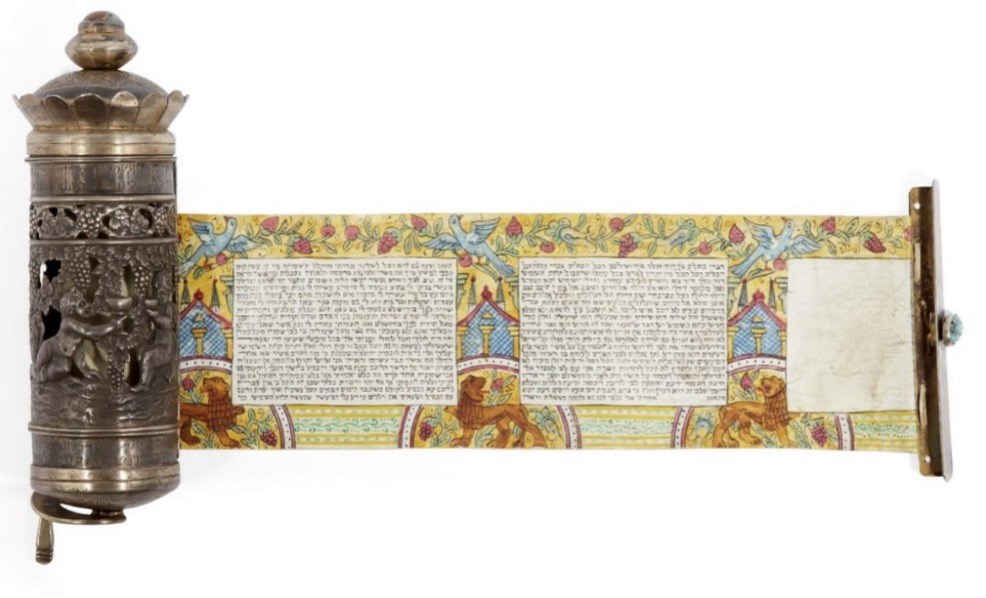 The highlight of the sale is lot 311, a miniature illuminated Megillat Kohelet [Book of Ecclesiastes Scroll], early 20th century. Estimated to make £2,000- £5,000, this scroll is written in a handsome Hebrew scribal hand in tiny lettering bordered by colourfully painted polychrome birds, fruit, lions within roundels and architecture on a yellow ground. Book of Ecclesiastes scrolls are far rarer than Esther scrolls, and the beautiful illumination on this example makes it even more special. It is in good condition commensurate with age. 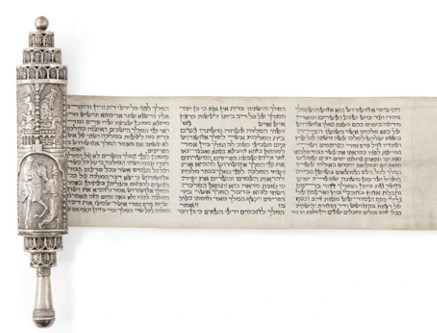 Estimated to sell for £1,000 - £2,000 is a HaMelech Esther scroll, megillah, in a silver case and original olive wood box, by the Bezalel School, Jerusalem, c.1925. Both the case and box are signed in Hebrew 'Bezalel Jerusalem'. The scroll case is beautifully chased with panels depicting scenes from the Book of Esther including Mordecai beseeching Queen Esther on behalf of their people, Esther beseeching her husband, King Ahasuerus, and Mordecai being led in triumph on a horse by Haman. This type of scroll is known as a ha-melech scroll because most of the columns, written in Hebrew, begin with the word ha-melech (the king). Pieces by the Bezalel School of Art and Design have become highly collectible. Established in 1906 by artist Boris Schatz as the “Bezalel School of Arts and Crafts”. Bezalel has evolved into one of the world's most prestigious art schools. 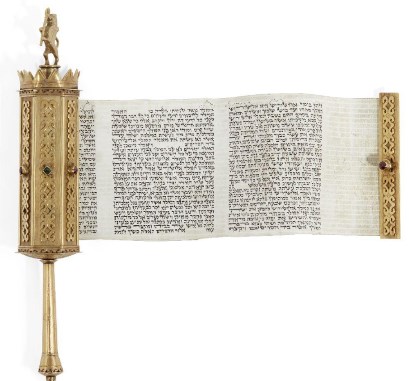 A fine example of a scroll case included within the auction is lot 312. The small jewelled Israeli HaMelech Esther scroll case, unmarked, assumed gold, c.1960 is attributed to Licica Smilovici. The case of hexagonal form with panelled sides is decorated with vertical bands of geometric scrollwork set with rubies and emeralds, the crown finial centred by a rampant lion. The scroll case has been entered into the market with an estimate of £4,000- £8,000. A very similar scroll sold within Sothebys  auction titled ‘ A Treasured Legacy : The Michael and Judy Steinhardt Judaica Collection’ in 2013 made over £9,000. 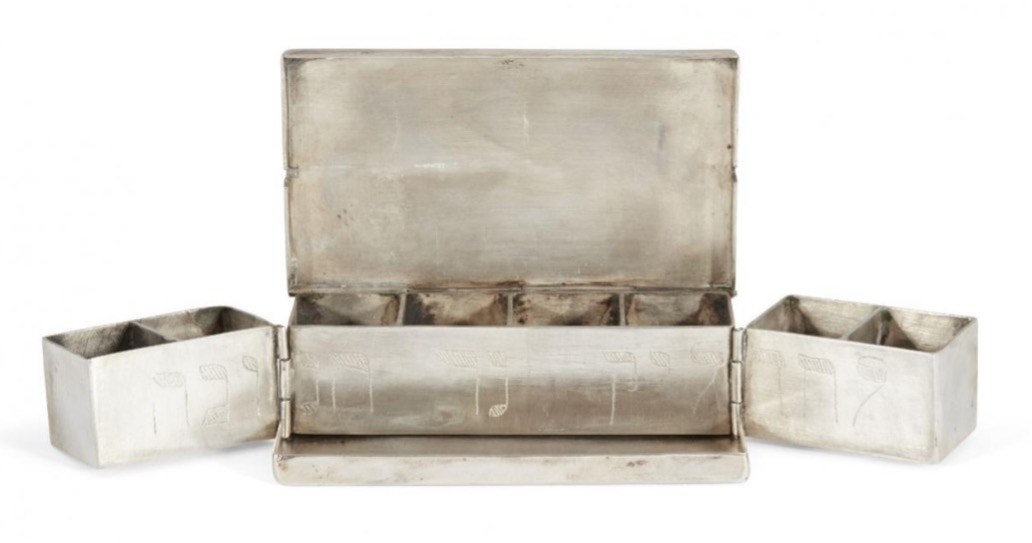 A silver travelling Hanukkah lamp in the form of a book, possibly Polish, mid-19th century

Lot 334 on offer is a silver travelling Hanukkah lamp in the form of a book, possibly Polish, made in the mid-19th century.  The lamp that comes with an estimate of £800- £1,200 is engraved on the cover in large Hebrew characters 'Shaddai' (The Almighty), and the base is engraved with the Star of David, beside a maker's mark LC/T in a shield-shaped punch. The interior has eight square compartments, the front four hinged and opening to form a straight line of eight, which conceals along the front a Hebrew inscription including the word Hanukkah. On the first night of Hanukkah, the first light is lit using the shamash. On each subsequent night, an additional light is ignited until on the final night, all the lights burn. This lamp would be great for anybody travelling or needing a compact, foldable lamp for the home.

Coming with an attractive estimate of £200- £300 is a highly collectable early 20th century (1931) 9ct gold jump hour digital wristwatch. The wristwatch comes with Glasgow hallmarks, 1931, and later leather straps. This style of watch coined the term ‘digital watch’.  Although the movement is mechanical, the hours, minutes and seconds are read through small apertures in the case. The time is displayed using ‘digits’ – hence the name digital. These early mechanical digital watches are the predecessors of modern digital watches. While electronic digital wristwatches first appeared in the 70s, the very first digital wristwatches actually came onto the scene in the 1920s.

Lot 320, estimated at £2,000-4,000 is a silver filigree spice tower of architectural form, by the Bezalel school, Jerusalem, c.1920. This highly collectable piece has five domed turrets and a flag engraved 'Jerusalem' in Hebrew to hinged cover, the square foot applied on one side with Hebrew words reading 'Bezalel Jerusalem'. It is also stamped with an Austrian import mark for 1901-21, and mounted on a hardstone base.  Many Jewish families will use a Spice Tower (besamim) at the end of Shabbat. Strong, sweet spices such as cinnamon sticks, cloves and nutmeg are placed inside it. The sweetness of the spices symbolizes the Jews' collective hope that sweetness will prevail beyond the actual holiday--during the coming weeks, months and years. Although the tradition of using besamim boxes dates back to the mid-1500s, few early examples have survived. The oldest ones still in existence are from the mid-1800s, according to Jay Weinstein, author of "A Collectors' Guide to Judaica" (Thames and Hudson, out of print). Spice boxes are rarer than other ceremonial objects. As a result, the best older examples are more sought after, and their value is expected to remain strong and increase. 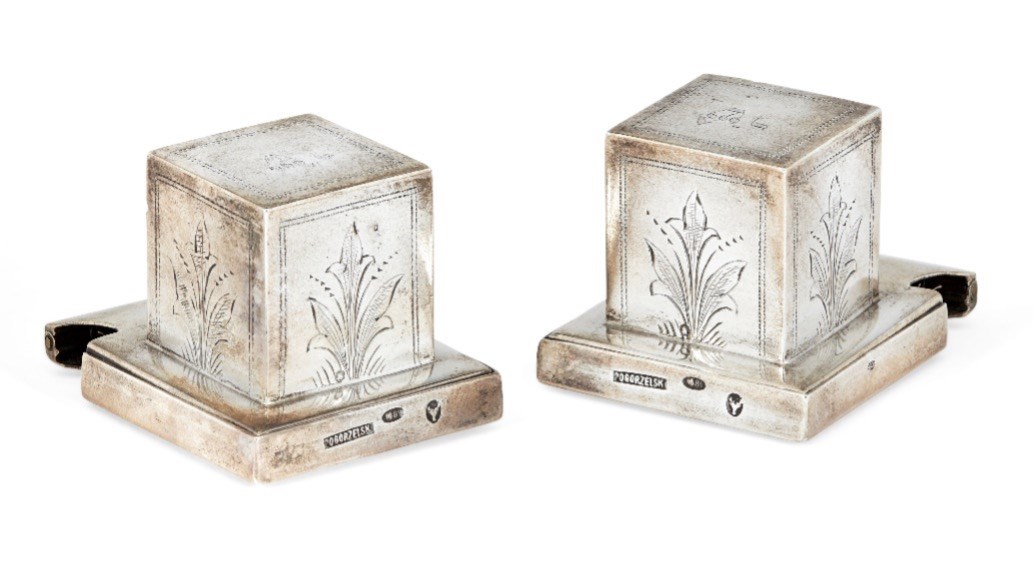 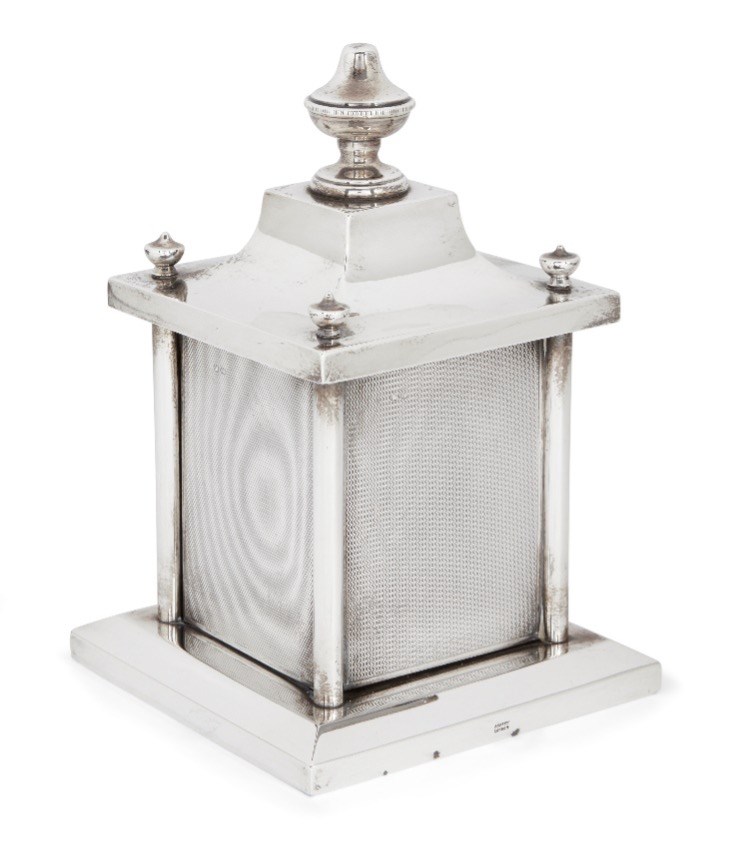 Lot 181 is a rare relic of the roaring twenties – the golden era of tobacco. The pagoda-shaped silver cigarette holder by Asprey comes with an estimate of £400- £600. This is not your average cigarette box. Chinoiserie enjoyed a revival in the 1920s-1930s and Asprey, always at the forefront of stylish, innovative design responded with creations of this sort. The lovely, unusual piece has an opening with a twist of the finial to reveal three wooden triangular compartments for cigarettes. 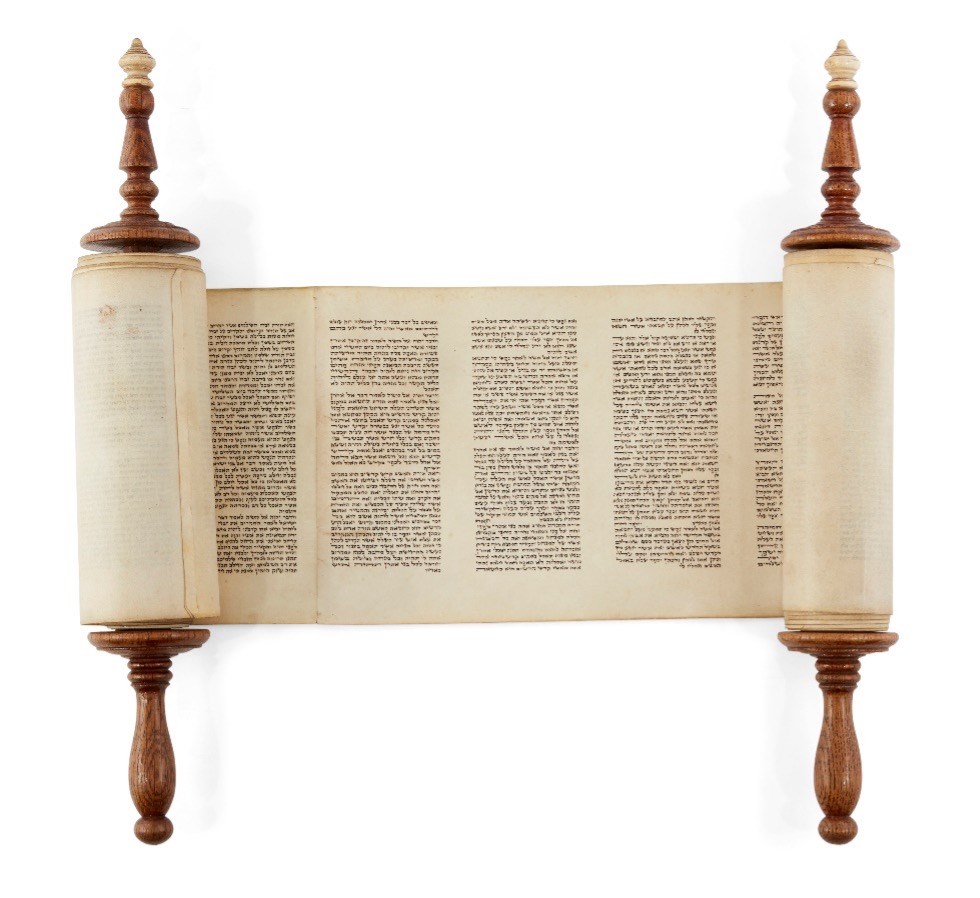 Lot 316 is a fine example of a miniature Sefer Torah mounted on ivory capped wooden rollers, probably 18th century, from Germany or Poland, estimated to make £5,000- £10,000. The text is arranged according to the vavei ha‘amudim format, 42 lines to a column, the black velvet mantle embroidered in gold thread with a Star of David and thread border. The Torah (or Pentateuch) is commonly acknowledged to be the oldest section of the Hebrew Old Testament, containing the five books of Moses. The process of writing a Torah is an extremely long one – it can take up to a year. Every Torah is written entirely by hand, with each of the 304,805 letters inscribed with a quill and specially prepared ink. 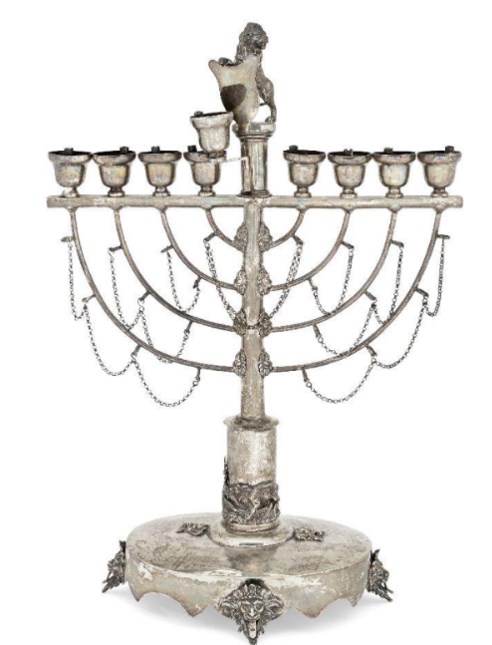 At £1,000- £2,000 is this large Austro-Hungarian menorah, mid-19th century, stamped only with 13 standard mark. The menorah is stunningly designed with finial of a lion rampant supporting a vacant shield, the central column with applied lion masks from which issue the rounded wire branches, each with chains dependant. The Lion of Judah is traditionally regarded as the symbol of the Israelite tribe of Judah. The cylindrical base of stem is applied with cut-out deer in forest setting and the large oval base is finished off with applied with grotesque mask feet. This is a lovely, impressive example of a menorah – the traditional Jewish symbol of light.

Estimated to make £400- £600 is a 19th century Russian provincial silver Torah pointer, yad, from Vilnius, c.1860. The maker A. Magat, assay master Alexander Myanovsky, decorated the midsection with an applied lion mask and the squared handle is set with a small tear-shaped coral cabochon to spherical finial engraved with two Hebrew letters beneath a single hoop.  Now in Lithuania, in 1860 Vilnius where the Torah pointer was made was part of the Russian Empire. During the second half of the 19th century, the Jewish community in Vilnius thrived and the city became known as the capital of Torah studies,  or  “the  Jerusalem  of  Lithuania”  among  world  Jewish  communities. 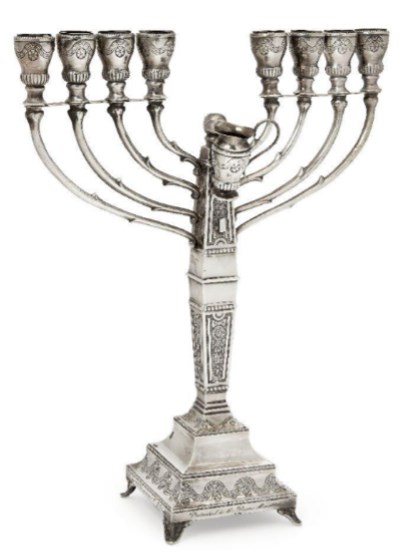 An interesting silver menorah formerly presented to Margaret Thatcher, stamped '925 sterling' comes with an estimate of £2,000 – 3,000 (lot 416 ). The menorah complete with eight branches, comes with an auxiliary miniature oil jug and is decorated in floral patterns. An engraving to base reading 'Presented to the Prime Minister The Rt. Hon Margaret Thatcher FRS MP, With very best wishes from the Lubavitch Foundation UK, July 1989'. The provenance of the menorah was that it is was presented to Margaret Thatcher by the Lubavitch Foundation in July 1989. A photo of Thatcher and the menorah-flanked by Rabbi Aron Dov Sufrin and several others-hung on the wall of Rabbi Aron Dov Sufrin (Director of Education of Lubavitch schools in London) until his death in 1997. Passed on to his son, the photo is now said to hang in the Chabad House office.

A Private Collection of Silver & Judaica : Live online only sale

Due to current restrictions we are not sure if it will be possible to hold a public view until we receive further government announcements.

To register your interest in viewing please email Georgina Agnew, who will then contact you to book an appointment should viewing be possible.

Register to bid live online with RoseberysLive or contact us to book a telephone line. Bidding in the room is not available to comply with social distancing for this auction.