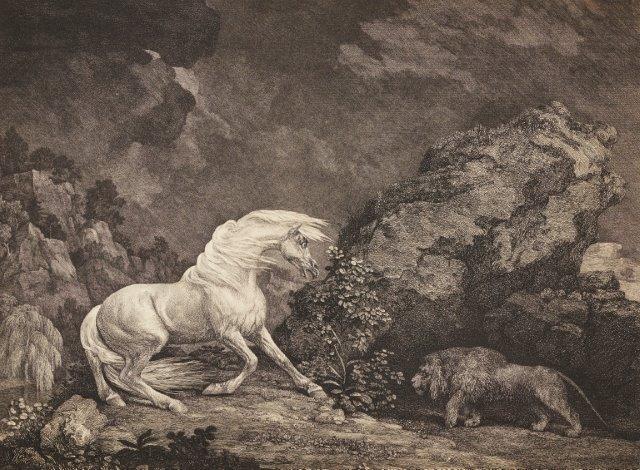 London: Roseberys London’s popular Old Master, 18th & 19th Century Pictures sale returns on July 17 with over 350 lots containing a multitude of mediums, schools and genres by both British and international artists. Among the headliners sure to attract attention is a studio copy of ‘Unrequited Love’ by the Flemish artist Jacob Jordaens (1593-1678) - the leading Baroque painter of his day behind Rubens and Van Dyck. 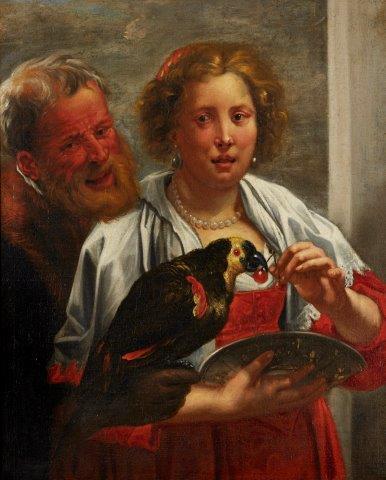 Studio of Jacob Jordaens, Flemish 1593-1678- A Bearded Man and a Woman with a Parrot: "Unrequited Love"; oil on canvas

The theme of unrequited love was a popular subject for Old Master painters and Jordaens returned to it on several occasions. Two versions fully ascribed to the artist are known, along with two other documented examples from his studio. Estimated at £8,000-12,000, this version has been in the same family since 1966 when it was acquired at an Old Masters sale at Sotheby's. It matches the composition of one of the fully ascribed versions, which sold at Sotheby’s for $80,000 in 2009. Jordaens was known to use the same models on several occasions throughout his career. The male model is most likely Adam van Noort, Jordaen’s teacher and father-in-law, whilst the female model is probably Jordaen's eldest daughter, Elizabeth, born in 1617. (Lot 38) 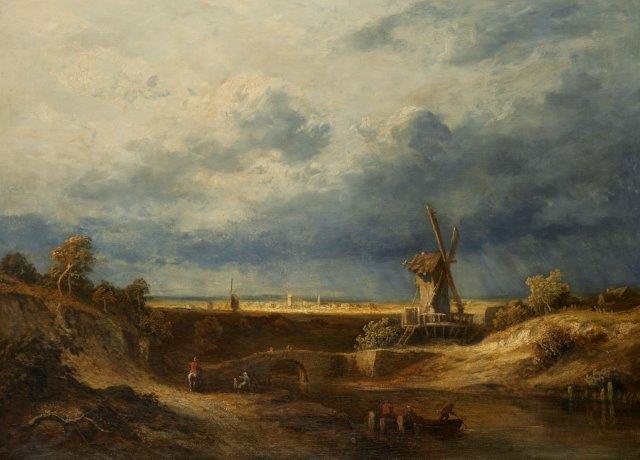 Les moulins a vent by Georges Michel (1763-1843), above, shows the unmistakable influence of the famous English landscapist John Constable, whose celebrated work, The Hay Wain, was exhibited at the Paris Salon in 1824. An early exponent of plein air painting, Michel remained relatively obscure in art circles throughout his life, until his death in 1843. Nonetheless, he inspired French painters such as Vincent Van Gogh and Jules Dupre, particularly through his plein air approach to painting. A catalogue raisonne on the painter is in preparation. The oil on canvas is estimated at £10,000-15,000. (Lot 115)

Elsewhere are seven devotional tondo oil on panels linked to the Leiden School and the Circle of Cornelis Engebrechtsz (1460-1527). Produced for private devotional use, these small pictures depict Biblical scenes, including from The Flight into Egypt, The Crucifixion and The Entombment. Engebrechtsz was a Dutch artist from the city of Leiden, whose workshop included his three sons, Pieter Cornelisz, Lucas Cornelisz and Cornelis Cornelisz, as well as Lucas van Leyden. The group for sale clearly shows the influence of Engebrechtsz or his workshop, especially in the oval shaped heads and elongated figures of the women depicted. The group is estimated together at £5,000-7,000. (Lot 6)

The sale also contains a contemporary copy of Giuseppe Cesari’s (1568-1640) famous Expulsion of Adam and Eve from Paradise, a small copper work held by the Louvre. This version, shown left and estimated at £4,000-6,000, is larger suggesting it may have been designed for a specific wall space. (Lot 17)

George Stubbs (1724-1806), horse painter extraordinaire, frequently invested his compositions with Romantic flair by including ravenous predators and dark and stormy vistas. A Horse Affrighted by a Lion, 1777, estimated in the sale at £4,000-6,000, is one such work. The print is rare as it does not appear to have come up for auction in recent years. It was etched and sold directly by Stubbs on subscription and in four states, two of which are held in The British Museum. This example is comparable to either the third or the fourth state and has been in private hands for 30 years. (Lot 89)

This fine George Romney (1734-1802) portrait of a London merchant, top left, is guided at £2,500-3,500. The portrait depicts John Smith, merchant of Westminster, and was painted at least twice by Romney for two of the sitter’s three sons (a third may yet still come to light). The other 'virtually indistinguishable' version of the work is held by the Barber Institute in Birmingham.
Romney’s records show that eight appointments were scheduled between 1782-83 for the painting, with ‘Mr Smith of Westminster' paying Romney 40 guineas for his father's portrait on 21 April 1783'. (Lot 78)

There are three superbly executed pastel portraits by the noted Irish artist Hugh Douglas Hamilton (c.1740-1808). The trio are especially desirable as they contain a pair of associated female portraits, which are also signed and dated. Bids are invited in the region of £3,000-5,000. Hamilton studied under Robert West at the Dublin Society School of Drawing. His work mainly focused on oval portraiture in pastel and crayon. Starting in 1764, he travelled and worked in both London and Rome before returning to Dublin in 1792, where he continued to work up until retiring in 1804, before his death in 1808. (Lot 100)

William Strutt (1825-1915) produced many studies of the lions at London Zoo, exhibiting his first lion painting at the Royal Academy in 1888, and later becoming Fellow of the Royal Zoological Society in 1898. Boy with a lion, entered in the sale with a £3,000-5,000 estimate, is one such example. The lion in the picture is comparable to His Majesty, a painting exhibited at the Royal Society of British Artists in 1890. Strutt exhibited regularly at the Royal Academy between 1865 and 1893 and was elected a member of the Royal Society of British Artists. He also travelled to Australia and joined the Australian Gold Rush of 1852, working in the gold fields for 18 months but found little success and returned to his more profitable career as a painter. (Lot 204)

Showing the influence of Scottish Impressionist Edward Atkinson Hornel, Thomas Bromley Blacklock (1863-1903) predominantly painted children and fairies using the landscape around Kirkcudbright in Scotland as a backdrop. One of his oils depicting a group of children enjoying a picnic is included here, top left, and is estimated at £3,000-5,000. (Lot 322)

This 19th century painting by John Partridge (1790-1872), pictured top right, shows some influence in its treatment of the subject of the Victorian Fairy painting artists. The sitter is Lady Constantia Lowther (1831-1864) aged five in 1836 and was commissioned by her father The Honourable Henry Cecil Lowther DL JP, a Conservative politician and second son to William Lowther, 1st Earl of Lonsdale. Prior to Partridge’s death in 1872 he donated several portrait paintings to the National Portrait Gallery in London, where many still hang today. The portrait, which carries hopes of £3,000-5,000, was painted the same year he gained royal patronage through a commission from King Leopold I of Belgium. This led to an invitation in 1838 to paint Queen Victoria, which in turn led to further successive paintings of the Queen and of Prince Albert, and in 1843, was appointed Portrait Painter Extraordinary to both Her Majesty and Prince Albert. (Lot 133)

Another highlight is this late 19th century interior scene by Albert Chevallier Tayler (1862-1925). The signed oil on canvas of figures luncheoning, dates to 1890 and shows the influence of James Tissot from his studies in Paris at the Atelier of Jean Paul Laurens, and the Newlyn School in Cornwall. Tayler later settled in London and focused on portraiture. This lot is estimated at £3,000-5,000. (Lot 321)