LONDON: An important and rare enamelled and diamond-set Sikh ‘Order of Merit’ emerged as the star of Roseberys London’s Islamic & Indian Arts auction where it was taken to £24,000. The medal, offered alongside other choice pieces from the Islamic and Indian worlds on October 22, was introduced by the charismatic ruler Maharaja Ranjit Singh (r. 1801-1839), the first Sikh maharaja of the Indian state of Punjab. Ranjit Singh, remembered for uniting Sikhs and founding the prosperous Sikh Empire, had a great curiosity of European medals and decorations, with this medal appearing to have been directly inspired by the French Legion d’honneur worn by one of his foreign military commanders, General Allard. Introduced towards the end of his reign, the c.1830s medal, known as ‘Star of the Prosperity of the Panjab’, is distinguished by its five large and five small pointed branches issuing outwards alternately from a roundish centre bearing a likeness of the Maharajah on one side. It was meant to be worn round the neck and is similar to an Order of Merit in the Sheesh Mahal Museum and Medal Gallery in India and an emerald-set example in the V&A. (Lot 454)

Further highlights came in the form of two rare Egyptian hippopotamus - one turquoise-glazed and one white-glazed – which sold for a combined £23,000 in the 530-lot sale. The ancient turquoise hippopotamus figurine - one of the most evocative and enduring images found in Egyptian art - found a buyer at £15,000. The diminutive antiquity, measuring just over 5 inches long and around 3600 years old, was modelled with bulging hooded eyes and small pricked ears. Hippopotami were viewed by the ancient Egyptians as both threatening and protective due to their associations with hunting and fertility. These small brightly coloured creatures, crafted from blue faience in varying sizes and decorated with images of the plants and animals found in the animal’s marshy habitat, were produced for a relatively short period of time in the Middle Kingdom and Second Intermediate Period. The example at Roseberys shared similarities with other figurines found in several international museums including ‘William’, the famous faience hippo in the collection of the Metropolitan Museum of Art who serves as the museum’s informal mascot. First recorded in The Adda Family Collection formed in the 1920s and ‘30s, it formed part of a consignment of nearly 100 lots majoring on ancient and Islamic gold jewellery and Roman and Islamic glass from the Property of a Lady. [Lot 51] 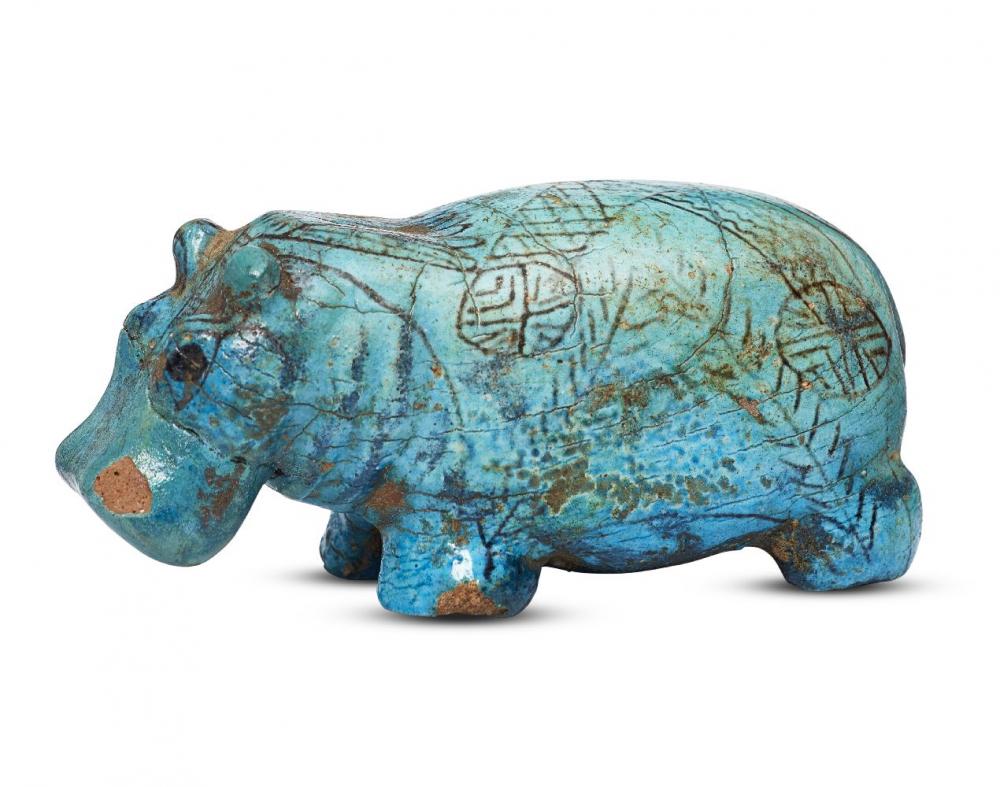 From the same collection was a smaller white glazed painted limestone hippopotamus, dating to the Middle Kingdom and painted in black with birds and a lotus flower on its back, which made £8,000. (Lot 59)

Chinese bidders clamoured for this finely carved Roman-style agate cup dating to the 20th century. The 7.2cm high finely polished piece was eagerly contested to £14,000, well over the £100-150 estimate. In China, agate symbolises longevity and is believed to elevate the mood and boost confidence. [Lot 79] 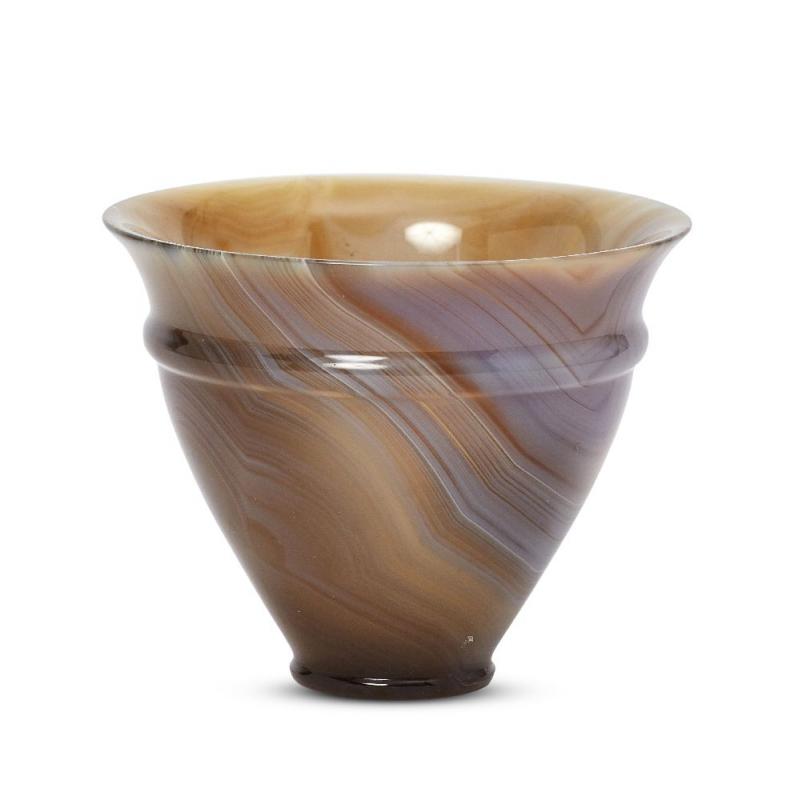 A rare 18th century illustrated copy of the Mahbub al-Qulub, also known as Shamsa wa Qahqaha, was another highlight. The Mahbub al-Qulub was the work of Barkhurdar bin Mahmud Turkman Farahi, a clerk of Shah Isma’il I (1487-1524) known by his pen name Mumtaz. Estimated at £6,000-8,000, the late 18th century manuscript with 19th century additions sold for £12,000. [Lot 300]

From the property of a lady was this silver and copper-inlaid brass high-spouted ewer made in Khorassan during late 12th century. Khorassan in north-eastern Iran emerged as the centre for producing luxury metal ware sometime toward the middle of the 12th century, replacing cast brass with hammered brass. Khorasanian inlaid wares are notable for the wide variety and virtuosity of their shapes: faceted or fluted ewers, candlesticks with bulging sides defined by rows of hexagons worked in relief, and circular inkwells surmounted by melon-shaped dome-like covers. This inlaid example, constructed out of sheet metal, beaten, engraved and decorated with rosettes, repoussé lions, sunburst moulding and Kufic inscriptions, made £5,500. [Lot 159]

Also heralding from medieval Iran was a fine blue black and white Kashan pottery bowl, decorated with a radial design featuring six cartouches of Persian pseudo-inscription and dated to c.1220. The city of Kashan was associated with high-quality ceramic production in the medieval period. This example had resided in a private UK collection since the 1970s which helped it to £4,400, many times its estimate. [Lot 158]

Led by the rare Egyptian hippos mentioned above, animal depictions in a variety of forms were a strong theme in this sale, exemplifying the universal and undiminished appeal of animal art. The so-called ‘Master of Animals’ or ‘Lord of Animals’ is a motif in ancient art showing a human standing between and grasping two confronted animals. This motif featured on a pair of well-preserved bronze horse bits dating to the 1st millennium BC. With provenance stretching back to at least the 1980s, they found a buyer at £5,000. [Lot 3]

There was also a charming set of eight dog portraits from the 48-lot private collection of Robert Stolper, who acquired the group during the 1960s-1980s. Executed in pencil and watercolour, and with each dog’s name inscribed beneath in the Devanagari language, they were painted in India in the late 19th and early 20th century and show great sympathy for the different breeds. The set sold for £1,300 to a determined bidder on the phone.  [Lot 378]