Tess O’Brien, Head of sale comments, ‘This year we are delighted to divide the sale into two parts, firstly the Impressionist and Modern section will take place, then the Post War and Contemporary will follow, later in the afternoon. The two different sales have a wide selection of highlights from all genres. In the Impressionist and Modern section, we have a wonderful Private Collection, as well as a rare Lempicka. In the Post War and Contemporary section, we have works from Rotella to Ben Enwonwu; also included in this section is a wonderful Greek collection.’ 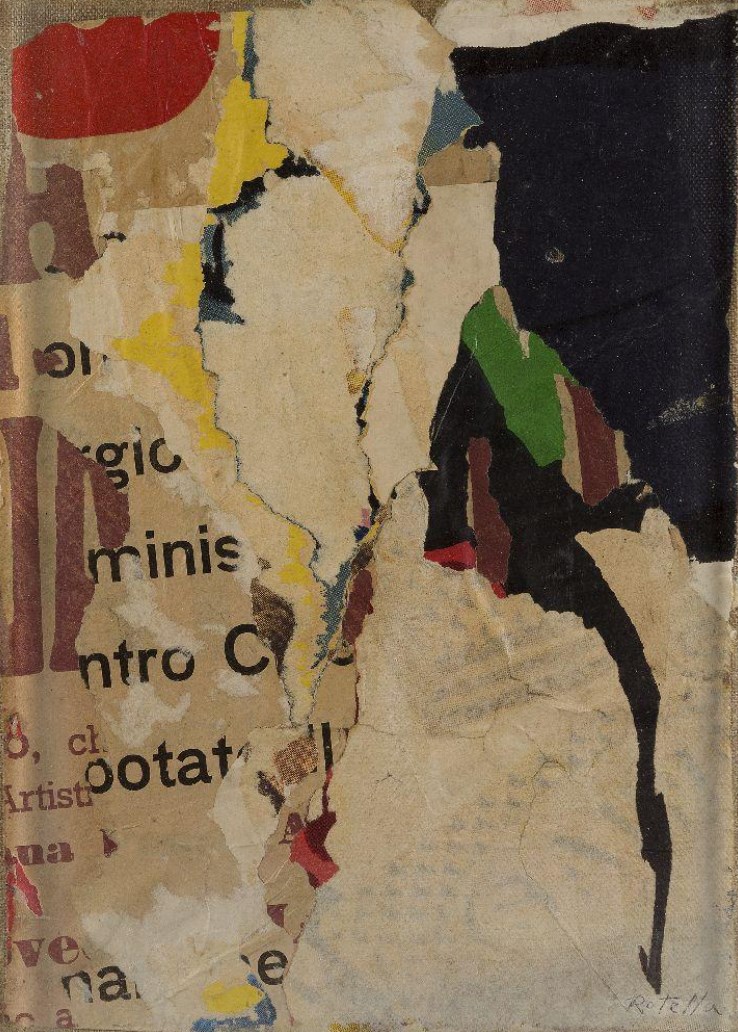 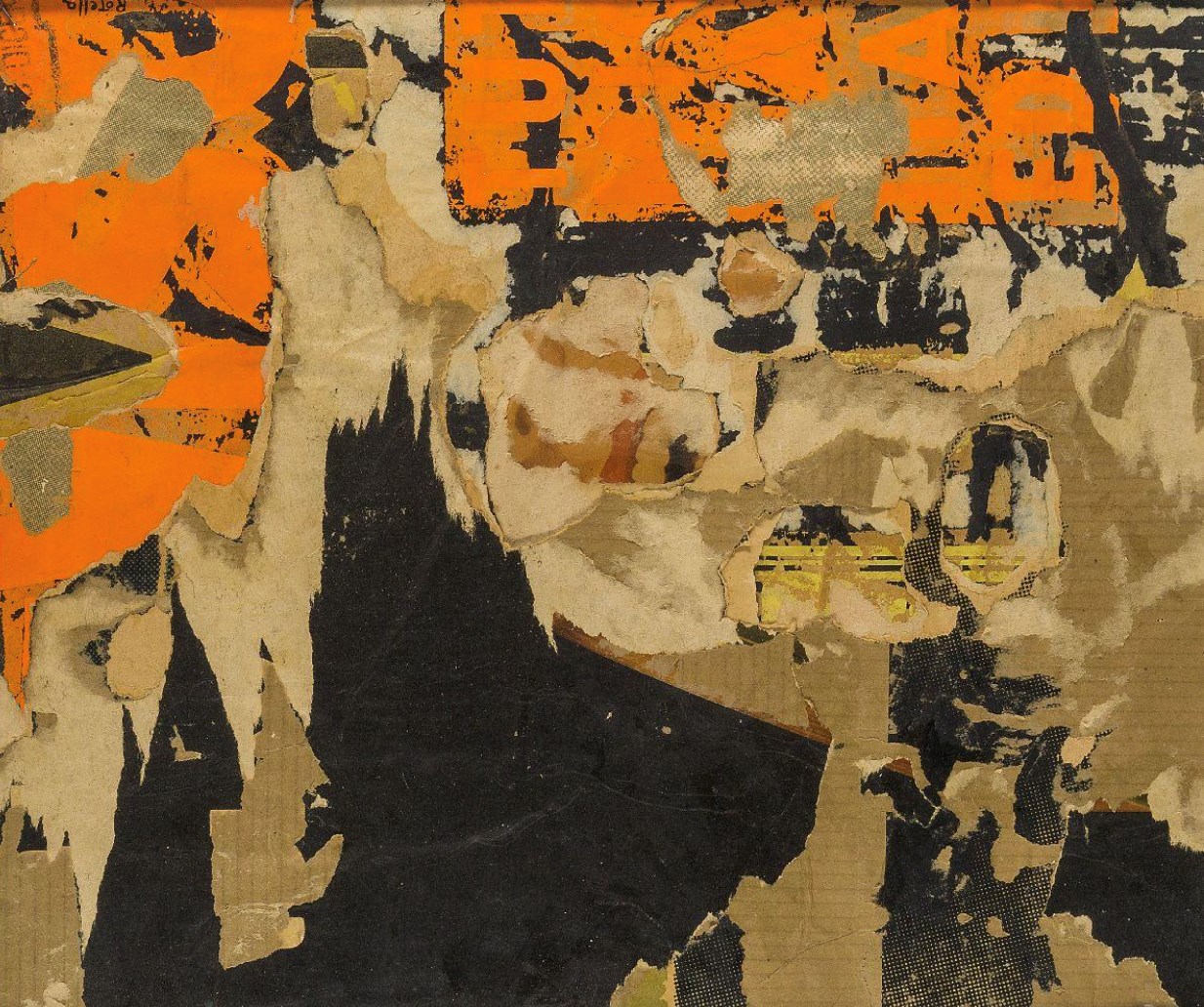 Another work on offer by Rotella is lot 143 coming with a higher estimate of £30,000- £40,000. Untitled, this work was created earlier in 1956 using décollage on hardboard (faesite). It comes with a provenance from a private collection in Rome; Il Ponte Casa d'Aste, 12 June 2019, lot 271; Private Collection, London Note: This work is registered in the Mimmo Rotella Foundation, Milan, under n. 2352 DC s.d./956ca. Mimmo Rotella was a seminal force in the development of European post-war art. It was in the 1950s that Rotella started to develop his recognisable style, after having travelled to the USA on a Fullbright Scholarship in 1951-2, where he encountered some of the leading artists of the twentieth century, including Jackson Pollock, Cy Twombly, Yves Klein, and Robert Rauschenberg. The radical nature of these artists’ approaches undoubtedly influenced Rotella’s own work, including the development of the décollages for which he is best known. These décollages, constructed from ripped film posters, by their very nature blur the boundaries between ‘high’ and ‘low’ art. This approach led Rotella to align himself with the Nouveau Réalisme movement founded by contemporaries Pierre Restany and Yves Klein in 1960. Rotella’s work has been the subject of exhibitions in his lifetime: his first solo exhibition was held at the Gallerie Chiurazzi in Rome in 1951, and he was chosen to represent Italy at the Venice Biennale in 1961. His artwork has been included in exhibitions at the Guggenheim in New York, the Centre Pompidou in Paris, and the Museum of Contemporary Art in Los Angeles. Décollages, such as this, are in the collections of galleries such as the Tate Modern in London, MoMA in New York, the National Gallery of Art in Washington D.C., and the Solomon R. Guggenheim Collection in Venice.

Coming with an estimate of £10,000- £15,000 is lot 147, by American/ Korean multi-media artist Michael Joo, b.1966. Titled ‘Doppelganger (Pink Rocinante)’ this work was created in 2009 in enamel on bronze, measuring 195.6 x 193 x 111.8 cm. Like much of his work, this sculpture reveals Joo’s interest in the mysteries of the natural world, and acts as an exploration of the tensions and harmonies that exist between the worlds of science and nature. This is most evident in the rendering of a zebra using the harsh industrial materials of metal panels and bolts, and finished with a highly artificial bright pink enamel. Indeed, the work draws attention to its human fashioning by depicting the mould used to make an earlier piece by the artist, Stubbs (Absorbed), which was itself inspired by an eighteenth-century painting of the animal by George Stubbs. This work was exhibited as part of a joint exhibition of Joo and Damien Hirst, entitled "Have You Ever Really Looked at the Sun?", held at the Haunch of Venison in Berlin in 2010. This piece was shown alongside some of Hirst’s famous animals preserved in formaldehyde, among other works, with both artworks acting as an exploration of the concept of what it is that makes a body truly alive. This piece has also been exhibited at the Anton Kern Gallery in New York. Joo is a Senior Critic in Sculpture at Yale University. His works are held in the Museum of Modern Art, the Guggenheim Museum, and the Whitney Museum in New York, the Moderna Museet in Stockholm, and the Samsung Centre for Art and Culture in Seoul. This lot is accompanied with a certificate of authenticity. This work comes with a provenance from Haunch of Venison, London; Blain Southern, London; Private Collection, London Exhibited: Haunch of Venison, Berlin, "Have You Ever Really Looked at the Sun?", 2010.

Entered onto the market with an estimate of £7,000- £9,000 is lot 145, work by Brazilian artist Jac Leirner, b.1961. Titled ‘Lung’ the perspex box and cellophane, measuring 30x10x6cm, was created in 1991. This work was created when. Jac Leirner was an artist in residence at the Museum of Modern Art, Oxford. The cellophane are the wrappers from a weeks’ worth of the artist's, then, smoking habit. Each copy was made by Matthew Tyson with the complicity of the artist who signed and numbered all copies. This work comes with a provenance from Publisher/ Editor Ka! editions; Private Collection, France; Sotheby's, New York, 26 May 2016, lot 86; Private Collection, London.

Lot 141 by the same artist is titled ‘Female Form I’ also in ebony, measuring 84x16cm (including base). This work is on offer with an estimate of £6,000- £8,000. Ben Enwonwu is considered to be one of the most influential and pioneering African artists of the 20th Century. Born in Nigeria in 1917, Enwonwu studied fine art under Kenneth C. Murray at Government College, Nigeria, from 1934 before being awarded a scholarship in 1944 to study in the UK at the Slade School of Fine Arts. During his studies within the UK, the British colonial government employed Enwonwu to create posters for their propaganda campaigns directed towards skilled, colonised Nigerians assisting in the post-war reconstruction efforts within the UK. In many aspects he was presented as a result of the British colonial governments efforts of tutelage in their colonies, however he was also adopted by African activists who considered him a part of Nigeria’s quest for political independence. His unusual position within Western society and back home in Nigeria meant his talent was exploited for multiple parties; evidently, he actively contributed to both sides, and his artwork of this period documents his interaction with both contexts. As a result his work is considered to be pioneering and consequently a unique form of African Modernist art. This sculpture is a wonderful example of Enwonwu’s style, focusing on the exploration and representation of the human body. Through his carving, Enwonwu masterfully emphasises the qualities of the wood to create smooth and sinuous abstract forms which exude a sense of motion and grace. This lot is accompanied with a certificate of authenticity from the Ben Enwonwu Foundation. 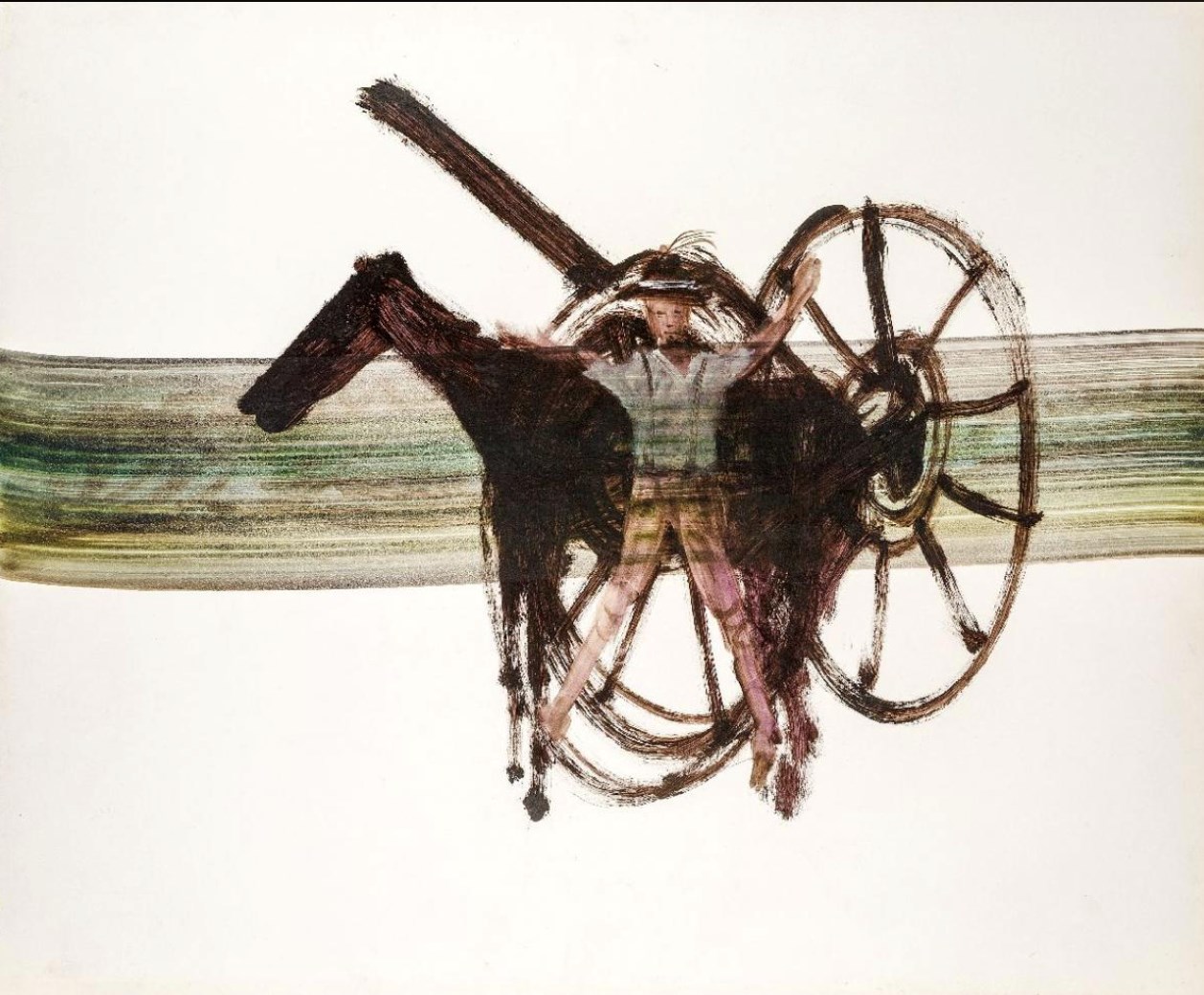 Lot 167 on offer is by Australian artist Sir Sidney Nolan RA, (1917-1992).  This work is titled ‘Soldier with a Gun Carriage’ from the Gallipoli series. The signed and inscribed oil on paper, measuring 52.5 x 63.5cm, comes with an estimate of £3,000- £5,000. Sidney Nolan was one of the most influential and important Australian artists of the twentieth century, whose work spanned a wide range of media. He was connected to the Heide group of artists, which included Arthur Boyd, John Perceval, and Albert Tucker. Nolan often depicted key figures from Australian history, including outlaws such as Ned Kelly, and desert landscapes of the Outback. This piece is from the 'Gallipoli' series, many or most of which are in the Australian War Memorial Collection. This work comes with a provenance from the Estate of the artist; a Private Collection, London.

Being entered into the sale with an estimate of £800- £1,200, is lot 142 by American artist Paul Jenkins, (1923-2012). Untitled, circa 1959; this watercolour, measuring 29x21cm, is signed and inscribed ‘For Lara’. This is a great price for the American abstract expressionist painter Paul Jenkins, who was a student of the artist Yasuo Kuniyoshi. Jenkins’s work, inspired by artists such as Jackson Pollock and his close friend Mark Rothko, can be firmly located in the abstract impressionist movement which shaped subsequent American art. Jenkins’s work is on display in locations throughout the USA and across the world, including in the Solomon R. Guggenheim Museum in New York, the National Gallery of Art in Washington D.C., the Tate in London, and the Centre Georges Pompidou in Paris. This work was a gift from the artist to the current owner. 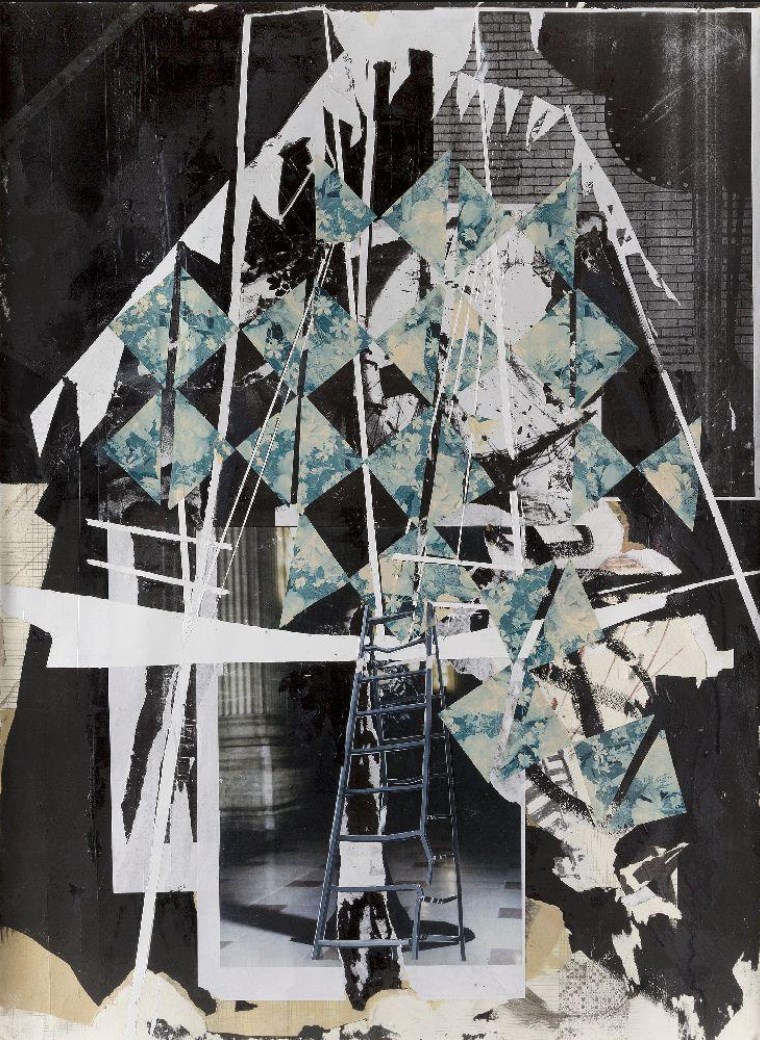 Another work on offer by an American artist is lot 146 by Francesca DiMattio, b.1981. The work titled ‘Collage 5’ was created in 2009; using a collage and acrylic on paper, measuring 91.4x66cm comes with an estimate of £1,500- £2,500. This work comes with a provenance from Pippy Houldsworth, London, where purchased by the present owner, where it was displayed in the Exhibition: Pippy Houldsworth, London 10 October- 17 November 2012. Pippy Houldsworth commented on the artist back in 2012 : "DiMattio's paintings have often made reference to feminine craft techniques such as sewing, weaving or quilt making. In an attempt to shift the assumption that these crafts are most often delicate or small-scale domestic creations, she scales them up and uses a rougher, more masculine hand. Keeping with an interest in domestic craft, it is fitting that her sculptures are formed from ceramic. Using a material deeply ingrained in rules, craft and history, she turns it on its head by irreverently pulling from its history and pairing extravagant reference with crude slabs marked by fingers and punch marks." 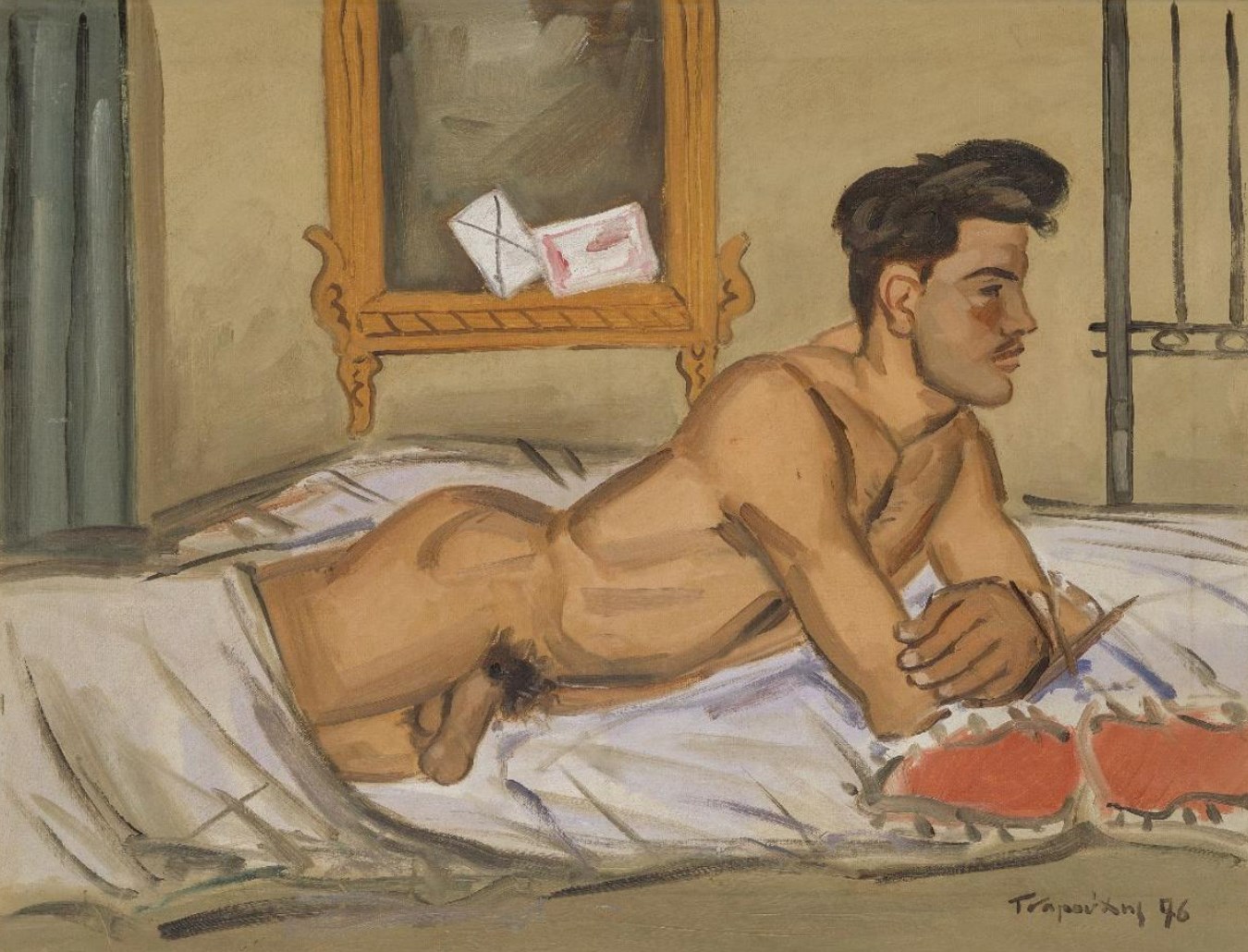 Coming with an estimate of £6,000- £8,000 is lot 214 by Greek artist Yannis Tsarouchis (1910-1989). Titled ‘Portrait of a man’ the oil on canvas, painted in 1996 measures 51x65cm. Tsarouchis attended the Athens School of Fine Arts, and also studied under Photios Kontoglou. Throughout his career Tsarouchis worked not only as a painter, but also as a costume and stage designer. In the 1930s Tsarouchis travelled to Europe where he met artists including Alberto Giacometti and Henri Matisse. He was also a founding member of the Armos art group, established in 1949, alongside (among others) Yannis Moralis, Nikos Nikolaou, and Nikos Hadjikyriakos-Ghikas. Tsachouris is often described as a central member of the influential ‘Generation of the 30s’ and was thus a notable force in the artistic landscape of twentieth-century Greece. Tsarouchis was very interested in the representation of the human form, making this confident depiction of a young, nude male figure typical of the artist’s output. Tsachouris’s first solo exhibition was held in Athens in 1938, and his work was included in the Venice Biennale twenty years later, in 1958. The Yannis Tsarouchis Foundation Museum was established in Tsarouchis’s house in Athens in 1982. This work comes with a provenance from a Private Collection in Europe. 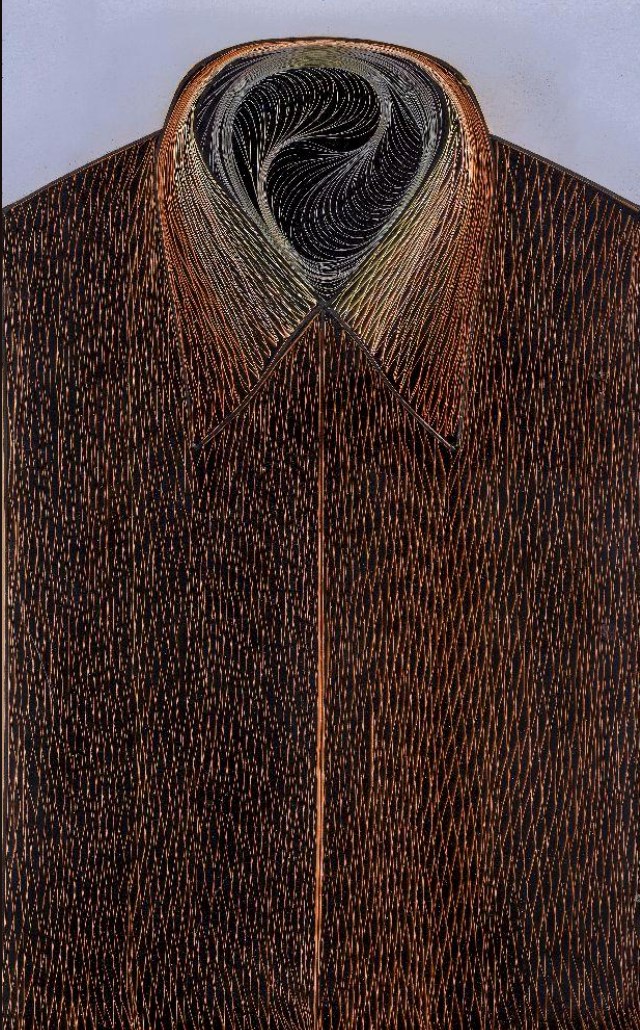 Rounding up the highlights on offer within the sale is lot 220 by Greek artist Pavlos Dionyssopoulos, (1930-2019). Titled ‘Chemise’ this construction with poster paper in perspex, was made in 1981. Signed and dated 81 on the reverse, it measures 46 x 28.5cm. This work comes from a private collection in London. It is estimated to sell for £800- £1,200 at auction.