LONDON: All is not what it seems in these impressive Venetian views, which will go under the hammer in a sale devoted to pictures at Roseberys London on November 21. 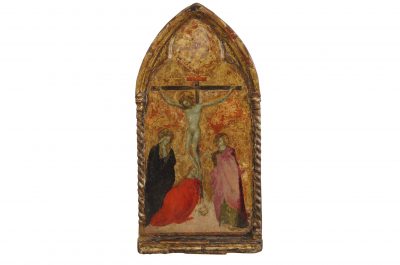 Inspired by the great Canaletto, these so called ‘capriccio’ oils (lot 62) are comprised of a fantastical mix of real and imagined buildings.
The setting for the compositions is the Grand Canal – though not as it has ever actually looked.
In the oil pictured left, the central element is not the real Rialto Bridge constructed in 1590, but rather the design for another version of the bridge, published by the preeminent Venetian architect Andrea Palladio in 1570. The painter here drew very precisely on the illustration found in Palladio’s ‘I Quattro Libri dell’Architettura’, only adapting it slightly by adding further sculptures and a few small details.
While a couple of different versions exist, this specific composition with Palladio’s Rialto Bridge design flanked by two of his buildings in Vincenza was commissioned by essayist and art critic Francesco Algarotti.
Algarotti was a fervent advocate of the capriccio art form, as he believed it combined the best of both reality and the ideal through uniting nature and art.The best-known example of the Algarotti composition of the Palladian Rialto is held in the Galleria Nazionale in Parma, though there are several versions. A pendant picture, matching the panel with the imaginary round building, is also held in Parma.
Art collecting was an integral part to the Grand Tour undertaken by young aristocrats during the 18th century, and capriccio paintings were particularly popular souvenirs.Canaletto’s compositions were incredibly sought-after by wealthy foreigners travelling through Venice, particularly with travellers from Britain where he was well-known. Many artists and followers imitated his style and made highly-skilled copies of his pictures to fulfil the demand for Venetian views. These fine 61 x 82cm oil on panels are estimated together at £15,000-25,000.

The 341-lot sale also includes an Italian oil of a boy with a lute (lot 55) attributed to Antonio Amorosi (1660-1738), a painter of the late Baroque, active in Ascoli Piceno and Rome.
The 97.5 x 72cm oil on canvas has museum pedigree, having hung in the Los Angeles County Museum of Art in Los Angeles, where according to a label attached to the verso, it was ascribed to fellow Italian Baroque painter Bernardo Strozzi.
It carries an estimate of £8,000-12,000. 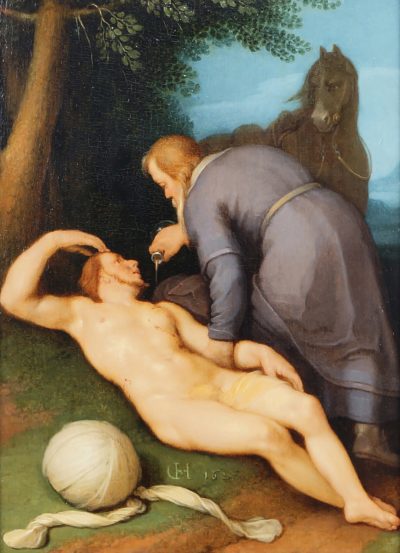 Another Italian highlight is an earlier 14th century crucifixion scene (lot 1). Catalogued as ‘Sienese School’, the 43 x 22cm tempera on panel is guided at £600-1200.

Representing Royalty in the sale through his steely gaze is a portrait of King James I (lot 6), painted after the Flemish artist John de Critz the Elder. The 47 x 36cm oil on cradled panel is guided at £1200-1800.

Another Low Countries entry is a painting of the famous parable of the Good Samaritan (lot 7) by the Dutch painter Cornelis van Haarlem (1562-1638), well known for his religious and mythological subjects.
Born in Haarlem, he was a leading painter in the group of Haarlem Mannerists, whose style was strongly influenced by the artists at the court of Rudolf II in Prague.
The signed 32 x 23cm oil on panel on offer at Roseberys London dates to 1627 and is guided at £8,000-12,000.
Female artist Elizabeth Gulland (1890-1910) was a genre painter and mezzotint engraver of mainly 18th century portraits.