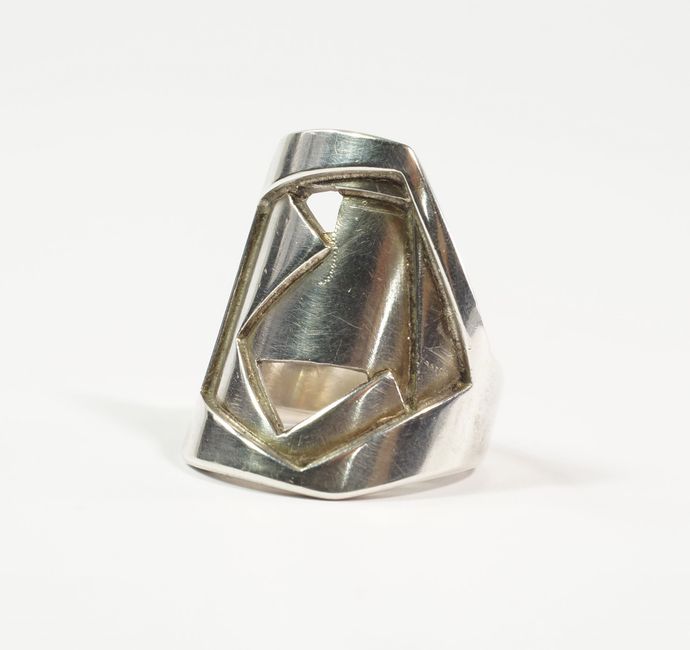 Lots 254 – 276 in the Decades of Design Auction are part of an important collection of twenty five pieces of jewellery and cutlery by the Bauhaus designer Naum Slutzky. They originate from the studio of the designer following his death in 1965, by decent and then to the present owner.

Russian born Slutzky, was a Bauhaus school industrial designer, whose creations reflected the age of machine technology; precious metals were rejected as inflation prices in Germany soared at the time, forcing goldsmiths to turn to base metals instead. The resounding feature of Bauhaus design was process and function rather than the value of the materials. The Bauhaus school of design developed in Germany just after the First World War, it formed during a period of political turbulence and was to have a profound influence on 20th century industrial design.

Slutzky studied engineering and fine art in Vienna, the two disciplines evident in his work. He started working as a goldsmith at the Wiener Werkstatte between 1912-13 before undertaking engineering studies (1914-19) at the Technical High School, along with formal artistic training at the Viennese Art School. .

In December 1919, Slutzky was invited by Walter Gropius to be an assistant in the metal and goldsmithing workshops of the Weimar Bauhaus, working with Christian Dell and Laslo Moholy-Nagy. In 1922 he was asked to lead the workshop for metalwork at the Bauhaus School and became a master goldsmith. . Between 1927 and 1933, he practised as an interior designer, lighting consultant and goldsmith for the retailer, Kaufmann of Hamburg. It was during this period in Hamburg that Slutzky began to be included in a number of important exhibitions. In the Neue Secession exhibition of April, 1930, held in the Hamburg Kunsthalle, Slutzky contributed lamps and jewellery. He is also recorded as an exhibitor in the Deutsche Werkbund exhibition, held at the Societé des Artistes Décorateurs in Paris.

Having been forced to flee to Britain from Germany in 1933 he carried on to have a rich and successful career and taught in many prestigious institutes After the war, from 1946-50, he was a tutor in jewellery design at the London, Central School of Arts and Crafts and from 1950-57, he was a lecturer in Product Design in the Department of Industrial Design at the Royal College of Art. He spent the final years of his career as Senior Lecturer in Product Design at the Birmingham School of Arts and Crafts (1957-64) and Professor of Industrial Design at Ravensbourne College of Art, Bromley (1965).. He was distinguished as being one of the most original jewellers to be associated with the Bauhaus. His work is characterised by simple geometric elegance, where designs are stripped to the bare minimum with engineering playing a subtle but vital role. He died on the 4th of November, 1965.

Full catalogue will be available online from 18 August