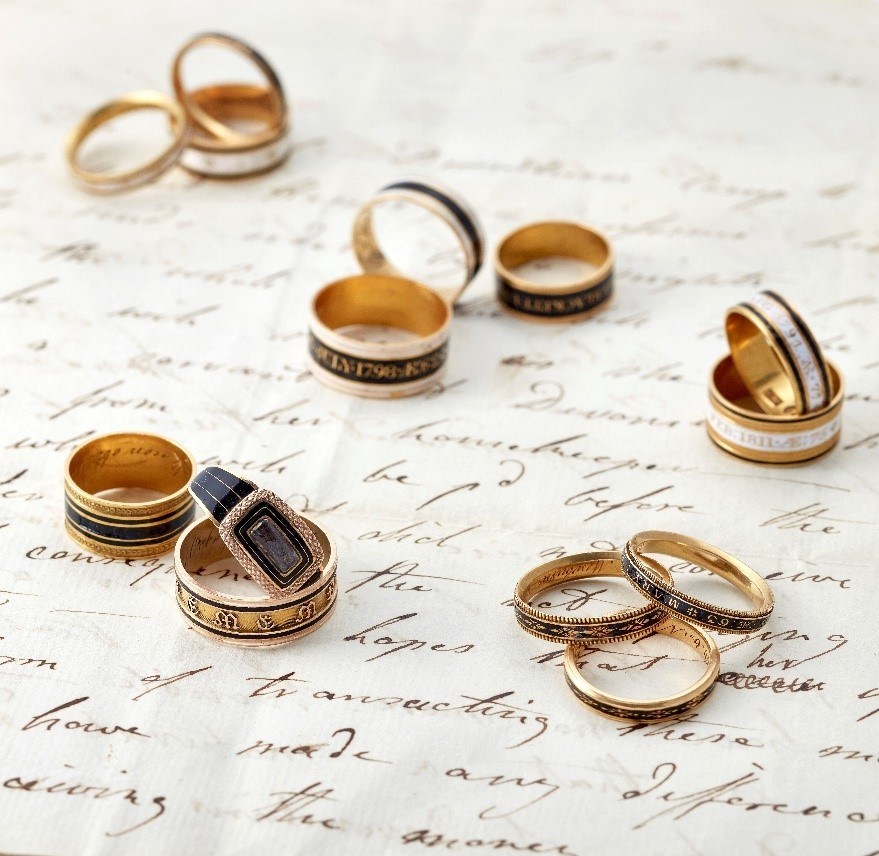 The appearance of mourning rings as a reflection of mortality in the form of what is termed ‘Memento Mori’ (‘Remember you must die’) first appeared during the late Middle Ages and by the late 16th century had become an accepted social statement. These rings reflected death as a symbol of faith, a reminder of mortality that death was inevitable. The principal symbol was the skull reminding the wearer of the vanity of riches, to always be aware that death ultimately prevails.  Rings often combined the skull or skull and crossbones with a heart or fede (clasped hands) motif often engraved and enamelled in in black and white. By the early 17thCentury the production of mourning rings had become relatively prolific. It was common custom to plan for one’s funeral and purchase a number of mourning rings prior to one’s death. These could be ready made and often took the form of a black enamelled band or signet style ring with a simple message such as ‘Not Lost but Gone Before’ engraved on the interior. The date of death could then be later added. By the late 17th century more elaborate rings began to appear engraved and enamelled on the outside with symbols of mortality such as the full skeleton, hour glass and even grave digging tools! These rings were to be given out at funerals to family and friends. Samuel Pepys the famous diarist who died in 1703 recorded purchasing and bequeathing 123 mourning rings to be given to relatives as well as his associates in high office. The provision of funerary articles was considered to represent high social status. By the mid. 18th century mourning rings began to undergo significant change. The memento mori iconography had waned giving way to more delicate designs they were much more sentimental in the attitude to death and very personal both for the deceased and the bereaved. The high mortality rate due to diseases such as tuberculosis, diphtheria and smallpox which often took the very young resulted in a huge demand for mourning jewellery in general.  Ring design began to incorporate the hair (considered everlasting) of the deceased and was normally mounted under a rock crystal bezel. The rings appeared more Rococo in design with a scrolling or wavy band with either black enamel representing an adult or white, a child or unmarried adolescent. The band would be engraved with the name of the person and date of death inscriptions took a recognised form, for example ‘William Smith Obt. (meaning died) Oct 1755 AET (age) 45’, rare examples may include the cause of death in the inscription, such as the mourning rings made to commemorate the death of the Hon. Sir Spencer Percival the only British Prime Minister to be assassinated. The ring was produced as a black enamel gold band and inscribed: ‘Rt Hon Spencer Percival Ob May 11 1812 Aet 49, Died by the Hand of an Assassin’. 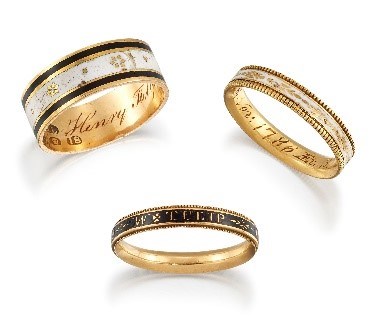 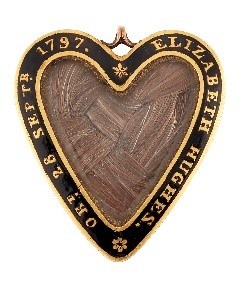 The introduction of engraved details on these rings reveals the nature of the person within and enable todays collectors to research the individuals who may turn out to be extremely important members of the ‘Great and the Good’ it can be very rewarding to research the biographical details of persons of historical note giving each ring a story. In addition, as mourning rings were not always hallmarked but have dated inscriptions enables collectors and historians to date other antique rings of similar style. Rings produced towards the end of the Georgian period were often designed more in locket form with lozenge shaped bezels with either locks of hair or sepia miniatures under rock crystal. These miniatures were intricately painted on ivory depicting such scenes as a solitary male or female mourner standing beside a tomb with willow trees in the background. Tiny fragments of hair were usually included in the makeup of the miniature. This new style implied a more reflective romantic approach to mourning. 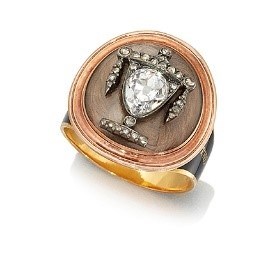 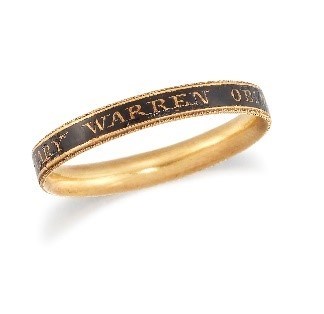 By the late 18th Century, the production of the plain band sometimes incorporating a combination of black and white enamel and sometimes inscribed with more than one member of the family were being made in vast numbers. These where it is generally believed seldom actually worn but kept carefully as a reminder to the bereaved. hence many have survived in extremely good condition. Those rings produced at the turn of the 18th century and into the regency period saw the band change from a plain band to a broad tapering model with central bezel. A famous example is that made to commemorate the death of Vice Admiral Lord Horatio Nelson who was killed at the battle of Trafalgar on 21st October 1805. Fifty-eight examples of these were produced in 1806 by Nelson’s jeweller John Salter. The main bezel is engraved and enamelled ‘Trafalgar’ beneath a Viscount and Ducal coronet, the reverse of the bezel engraved ‘Lost to his Country 21 Octr: 1805 Aged 47, the outside hoop engraved with the motto ‘Palman Qui Meriut Ferat’ (‘Let Him Who Has Won it Bear the Palm’).

By the mid to late Victorian period mourning jewellery was being mass produced, plaited hair of the individual which had customarily formerly been given to the jeweller by the patron for incorporation into mourning rings would now just be cut from a generic ready-made reel, hair was even imported from the continent to satisfy demand! The look of the mourning ring again became more simplified and quality suffered in order to suit all pockets and satisfy demand. The personal inscriptions were often omitted and only the engraved legend, ‘In Memory Of’ in black enamel was included in the manufacture, sometimes details of the deceased were engraved on the inside sometimes not. The death of Prince Albert in 1861 left Queen Victoria in despair and she went into deep mourning. This response was echoed in Victorian Society and the Funerary business flourished. A huge variety of mourning jewellery was readily available and much was of dubious quality this included rings that in many cases were very simple and many to them were produced in 9ct gold. In Charles Dickens’s novel ‘Great Expectations’ Pip observes of Mr Wemmick.  ‘He wore at least four mourning rings, besides a brooch representing a lady and a weeping willow at a tomb with an urn on it’. 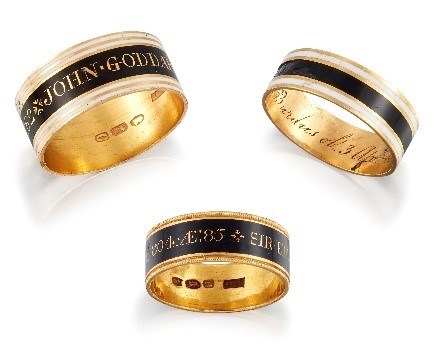 Find out more about the Jewellery & Watches department here

The Edwardian period saw the gradual decline of the use of mourning rings and the cataclysmic events of the first World War with the ever-increasing casualties changed British society’s approach to bereavement once again. The deprivations of the economy and the huge loss of so many lives which saw mourning on a national scale also resulted in the demise of mourning jewellery.