September sees the much anticipated sale of ‘Pony’ by Patrick Caulfield, but the piece is in good company in the Modern & Contemporary British Art Sale.

Over 400 lots comprising some of the best modern and contemporary painters and sculptors including names such as John Bellany CBE RA, John Hutton, Adrian Wiszniewski RSA, Richard Long CBE and Bob and Roberta Smith.

Birch adopted the Lamorna to distinguish himself from another fellow artist of similar name. Birch’s land and seascapes are held in the national collection at Tate Britain.

Provenance: with The Fine Art Society, London, according to a label attached to the reverse of the frame. 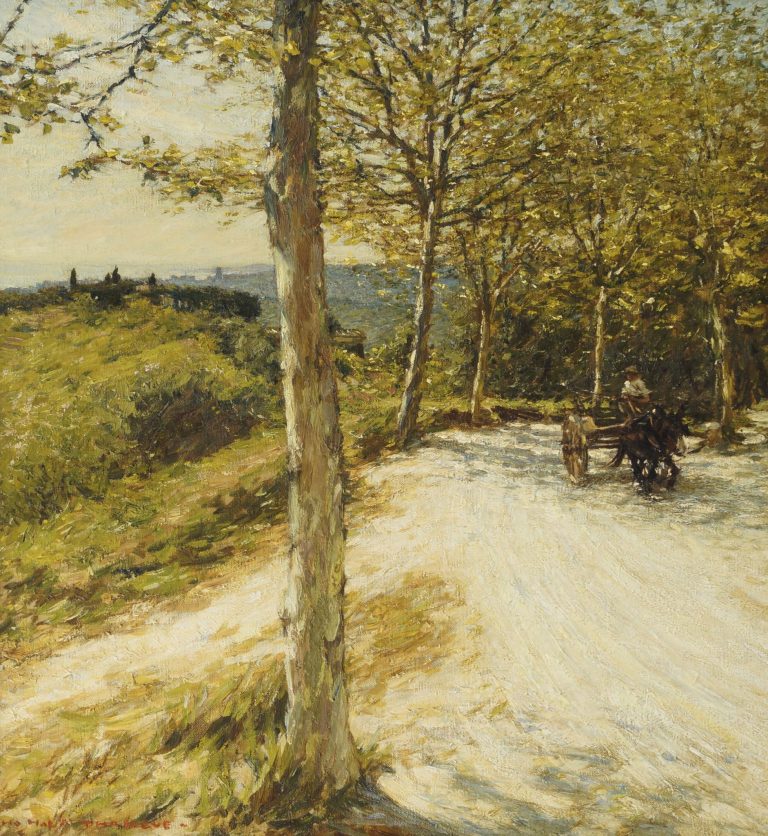 Of local interest (lot 42) is by Henry Herbert La Thangue RA, born in Croydon and educated a stone’s throw from Roseberys at Dulwich College.

He continued his art studies first at Lambeth School of Art (now City & Guilds of London Art School) and then onto the Royal Academy.

Lot 42 Henry Herbert La Thangue RA, (British 1859-1929) entitled; Spring in Provence is an oil on canvas, signed, signed and titled on the reverse of the stretcher, 67x57cm

Henry Herbert La Thangue also trained in Paris, his work was inspired by French realist painters such as Jules Bastien-Lepage and Gustave Courbet. Like them, he often painted en plein air, outdoors immersed in the scenery he was capturing on canvas. In both lots offered, La Thangue has employed a brush technique which allowed him to cover the canvas quickly, capturing the fleeting effects of light and shadow.

Sir William Russell Flint RA PRWS RSW, Scottish artist (1880-1969) is a highly regarded illustrator known predominantly for his depiction in watercolour of females. He studied at the Royal Institute of Art, Edinburgh and work for a time as a medical illustrator. He also went on to produce illustrations for several editions of books including, Chaucer’s The Canterbury Tales. 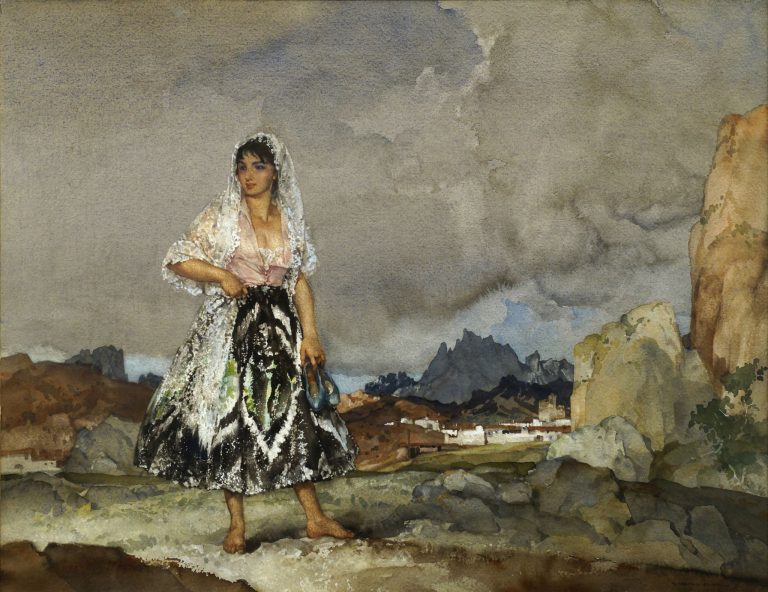 Provenance: with Williams & Son, London, according to label on reverse of frame.

This lot is accompanied by the 1959 Royal Academy exhibition catalogue, in which the present work is reproduced. David Tatham has kindly confirmed the authenticity of this work.

A total of five available lots are in the sale by this artist (lots 52-56) they depict single females entitled ‘Hermione’, ‘Loisette’, ‘Two Nudes’ and a landscape ‘Crofts at Reiff, Ross-shire’.

(Lot 82), Christopher Wood, had a short but vital career. Born in Liverpool in 1900 his interest in drawing started at age fourteen when he used drawing to pass the time whilst in recuperation from septicaemia. He briefly studied architecture (1919-1920) then a chance meeting with French collector Alphonse Kahn opened his world to the Avant guard artistic circles in Paris at the time; Meeting Picasso, Georges Auric and Jean Cocteau who influenced his work and ultimately developing an opium habit that would lead to his untimely death as he threw himself under a London train whilst in the midst of withdrawal.

Roseberys are grateful to Robert Upstone, who is writing the forthcoming catalogue raisonné of Christopher Wood’s paintings, for his assistance in the cataloguing of this work. 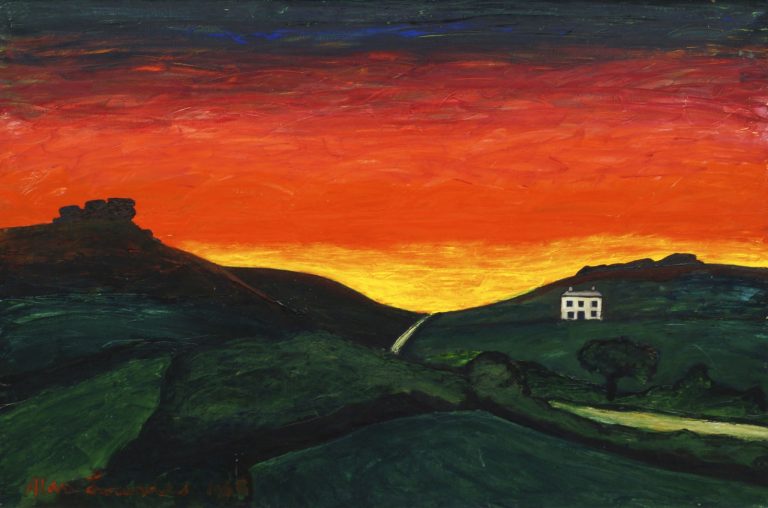 Alan Lowndes was a Stockport-born, self-taught artist. He is best known for his depictions of Northern life, although he also spent nearly a decade in St Ives and was associated with the St Ives School artists. Unlike L.S. Lowry and other Northern artists from the same period, Lowndes’ work is characterised by a vibrant colour palette.

Moving into modern abstract art (Lot 140) is by Henry Mundy, during his long and vast career Mundy is known for his ‘non-representational’ oil paintings

Scottish artists are well represented in the auction. Adrian Wiszniewski RSA b. 1958, educated at Glasgow School of Art, a leading figure in the revival of figurative painting in a group known as the ‘New Glasgow Boys’. His strong highly imaginative images can be seen in international collections including the Gallery of Modern Art in New York, Metropolitan Museum, New York, Setagaya Museum, Tokyo, Japan, Scottish National Gallery of Modern Art, Edinburgh, Tate Britain, London and the Victoria and Albert Museum, London. 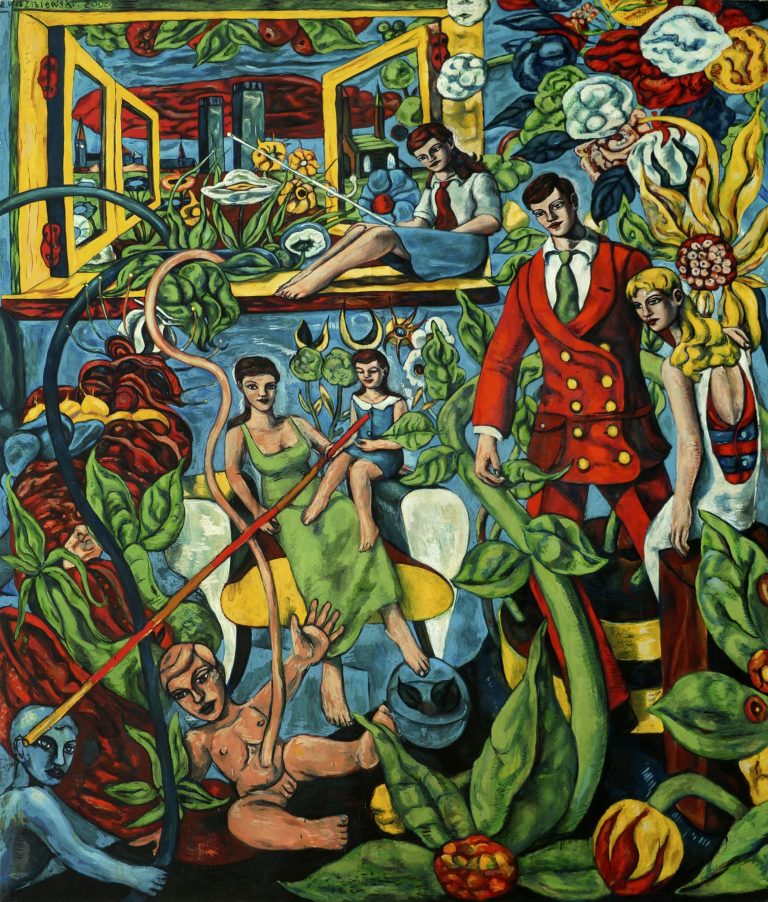 Provenance: Lemon Street Gallery, Truro, where purchased by the present owner, Note: the artist has kindly confirmed the authenticity of this work

The following is a transcription of a letter written by the artist to the present owner dated 10.11.08: I am really pleased that Tuber-babes has found its way into your collection. I began painting Tuber-babes in 2005, worked on it over a six-month period into 2006 and then left it until the beginning of 2008 when it was completed. The painting can be a long one and I spend that time developing the subject matter- drawing and re-drawing. I was intrigued to see where the painting story might take me. What would be the pivotal point, the point of the painting Tuber-babes balances on the relationship of two worlds- the rural (earthiness) and the urban (urbane). The rural world is populated by the Tuber-babes, their children are of the earth and of nature and are liked umbilically with it. They are however dominated by the more sophisticated and elevated who look down on the Tuber-babes as curios. They survey them with a superior air in the way that ancient gods might from their mountain top. They smile and toy with their ‘playthings’ and use a pointer as an educational prop. The Tuber-babes, however, like all other ‘vegetables’ that populate the canvas have an energy and an unflappable life-force- a fact that might prove dangerous if it were denied. This point is underpinned by the view from the window; a garden recedes into farmland and to a horizon where the twin Trade Towers stand distant and aloof. Yours Adrian Wiszniewski

Provenance: Lemon Street Gallery, Truro, where purchased by the present owner on 9 February 2014

Bellany was an esteemed Scottish artist, who was celebrated from as early as his graduation show. He taught at Croydon College of Art and Goldsmith’s College and enjoyed international acclaim, although his personal life was peppered with tragedy including the death of his wife and his failing health to liver disease.

In 1985 he received acclaim for his portrait of cricketer Ian Botham and in 2003, Damian Hirst came out as a long-time admirer of his – buying several of his works and praising him as one of the major painters of the 20th century.

Born in Paisley, Renfrewshire, John Byrne is a highly innovative and contrary contemporary artist. Stylistically, his work is constantly evolving, though always very technically precise, which his subject matter draws on a wide array of themes, from stage and television characters to memories from his childhood and Americana. He is perhaps better known for his work as a playwright and television writer: his work includes the Slab Boys Trilogy and Tutti Frutti.

Provenance: Lemon Street Gallery, Truro, where purchased by the present owner in 2017. Born in Paisley, Renfrewshire, John Byrne is a highly innovative and contrary contemporary artist. Stylistically, his work is constantly evolving, though always very technically precise, which his subject matter draws on a wide array of themes, from stage and television characters to memories from his childhood and Americana. He is perhaps better known for his work as a playwright and television writer: his work includes the Slab Boys Trilogy and Tutti Frutti.