LONDON: This hanging scroll conveying the legendary splendour of a Han Palace was painted over 250 years ago by the renowned Chinese landscape artist Yuan Jiang who flourished in the 17th and 18th centuries. 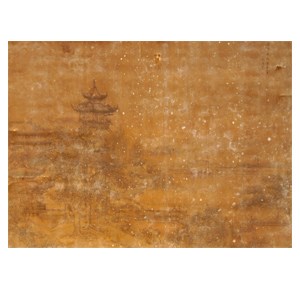 Spring Dawn in the Han Palace, dated 1740, was made using ink and colour on a piece of silk measuring 3ft 5in wide (Lot 390). Although the surface is marked with mould - this is only superficial damage - one can still ascertain the imposing grandeur and drama that are the hallmarks of a Yuan Jiang landscape. It carries an estimate of £2,100. The piece is among a rich array of paintings, porcelain, jades and other works of art in a sale of Chinese, Japanese & South East Asian Art at Roseberys London this May.

A master of composition and draughtsmanship, Yuan Jiang (active c.1690-1739) thrived in the commercial world of his native Yangzhou, serving at the imperial palace during the Yongzheng era. His striking vistas, created on large-scale hanging scrolls and multipaneled screen paintings, were the height of fashion, typically commissioned by the city’s mercantile elite for display in the spacious reception halls of their lavish mansions.Using his meticulous ‘ruled-line painting’ (jiehua) technique for the architecture - the only pictorial style to utilise carpentry tools along with a flexible brush - Yuan specialised in idyllic visions of palatial complexes set within sumptuous blue-and-green landscapes. The artist’s The Palace of Nine Perfections (1691) was included in the Victoria & Albert Museum’s 2013 exhibition Masterpieces of Chinese Painting 700 – 1900, which brought together the finest examples of Chinese painting from the beginning of the 8th to the end of the 19th century.

More rare gems come in the form of 14 genre paintings by Korean artist Kim Jun-Geum, better known by his artistic name Kisun (Lot 469). Kisun’s creations focus on genre scenes of everyday life in Korea including its many rites, crafts and customs. Today they offer a rare glimpse into the forgotten ways of traditional Korean life and are valuable repositories of knowledge for ethnologists and cultural historians, with examples in The British Museum, the Rijksmuseum, The State Museum of Oriental Art in Moscow and the Smithsonian Institution in the US. In November last year, Roseberys sold a set of 16 genre scenes by Kisun for £40,000 – a reflection of their great value and rarity. The latest consignment comes from the same vendor, who unearthed the group while clearing out his attic. Each ink and colour on silk scene is signed and inscribed. The group is estimated at £10,500. 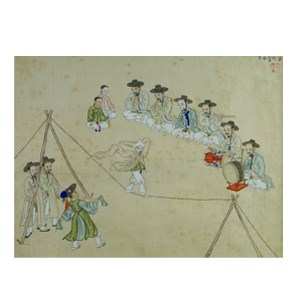 There is an exceptionally well carved 18th century Chinese cinnabar lacquer box depicting the so called ‘Seven Sages of the Bamboo Grove’ (Lot 258). These were a group of Chinese scholars and poets of the mid-3rd century AD who banded together to escape from the hypocrisy and danger of the political world, which had descended into turmoil following the fall of the Han Dynasty in AD220. The scholars chose to dedicate their time to poetry, music, Daoist-inspired discussions (as is the case in the scene here) and sometimes heavy drinking. The Seven Sages, which are referenced throughout Chinese and Japanese art and literature, have become emblematic of the retreat from public life and of the struggle of scholars against corrupt political practices and restrictive Confucian rules. References to the group were particularly popular in the transition period between the late Ming (1368-1644) and Qing (1644-1911) dynasties when social and political upheaval was rife and many officials faced the difficult decision of whether to serve the new Qing dynasty. The box comes from a private London collection and is estimated at £2,100.

The sale will feature a number of outstanding Chinese jades. Among them is a well-carved 18th century white jade carved in the shape of recumbent horse, which is laden with symbolism (Lot 260). Power, knowledge and imperial authority are the defining symbolic traits of this jade carving. The horse itself is an enduring symbol of speed, perseverance, imagination and youthful energy, while the motif riding atop a horse with books tied in a ribbon is a metaphor of a wish to attain enduring and permanent knowledge swiftly. The jade also features swirling waves at its base, a possible reference to an older Chinese narrative when a mythical horse was sent by sea carrying divine manuscripts to the emperor, ensuring divine rule and solidifying the emperor’s connection to heaven. The flames lashing out from the water are symbolic of the emperor’s fierce zeal, and a desire to rule wisely. An example of a jade horse carved complete with books and waves can be found in the Beijing Palace Museum. The example at Roseberys is estimated at £12,500.
A skilfully carved 18th century Chinese white jade vase from the Qianlong period is another highlight (Lot 235). The piece, estimated at £8,400, is carved to the long slender neck with two peonies and the compressed body carved in low relief with a taotie motif.

A noted lot in this section is a rare Kangxi period bottle vase painted in underglaze blue with the popular ‘love chasing’ scene (Lot 242).

Commonly depicted on porcelain, the scene of a man and woman hunting a hare derives from the Dream of Red Chamber. It is one of China's Four Great Classical Novels written sometime in the middle of the 18th century during the Qing Dynasty and long considered a masterpiece of Chinese literature. The piece is estimated at £2,800. Another rarity comes in the form of a Kangxi-period vase with an unusual combination of decoration (Lot 37). The vase has a monochrome body juxtaposed with a white neck painted in underglaze blue and copper red, with a chi-long dragon striding forward. The piece is estimated at £7,000. A rare piece of 16th century Chinese porcelain, hand painted and with the mark and period of Jiajing, is estimated at £2,800 (Lot 30). The square baluster vase is painted in underglaze blue to each side with a sage and an attendant placed in a wooded landscape beneath a scrolling peony border.