Mark Bowis – Head of Department offers an insight into the sale:

“The sale includes a range of jewellery dating from the 15th century to the present day. Special features are a section of vintage and later jewellery and objects by Cartier, a selection of signed pieces from jewellery houses such as Van Cleef & Arpels, Bulgari, Rene Boivin, Kutchinsky, Lalaounis and Christian Dior. Also featured in the sale are two American jewels by Marcus & Co and Black, Starr & Frost. The sale offers a chance to acquire natural pearls, diamonds, emeralds and Indian jewellery as well as pieces from the Belle Epoque period and earlier.”

Our top treasures in the sale are: 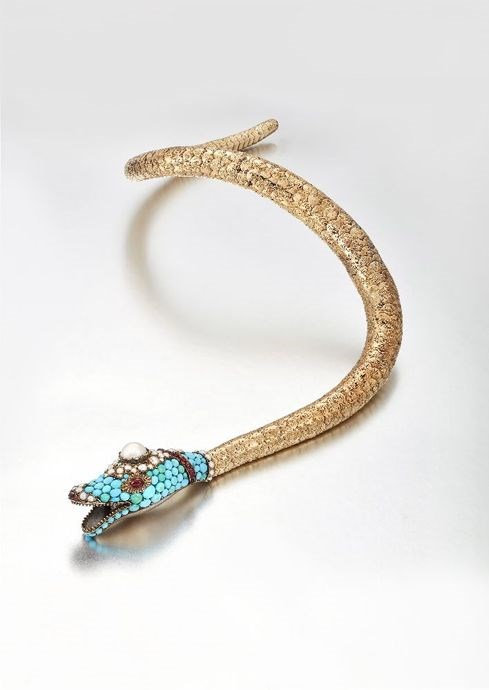 An unusual Serpent choker – From the property of a Noble Lithuanian Family, The early 19th century gold, turquoise and garnet serpent collarette necklace, composed of a series of gold graduated articulated scalloped links each engraved with a dot and striation pattern to a modelled silver-gilt serpent head pave-set with turquoise and half-pearls, the centre with collet-set half-pearl crest and applied gold and cabochon garnet set eyes and faceted garnet chevron shaped collar detail, circa 1830, 36cm long.

Provenance: The Romer family of Lithuania The vendor states that according to the family records the collarette was purchased in the early part of the 19th century in St. Petersburg by a

Polish nobleman Hieronim Przeciszewski as a gift for his daughter Celina Przeciszewski who married Izydor Romer of the Romer family, one of the oldest noble families in Lithuania. The necklace was later passed to Anna Romer who presented it to her brother’s wife the painter Zofia Dembowska, thence by descent.

Serpents have been popular throughout the ages in jewellery, expressing many different interpretations such as good vs evil, wisdom or prolonged life but, for Queen Victoria, in receipt of her engagement ring styled like a serpent from Prince Albert it signified the circling of everlasting love. 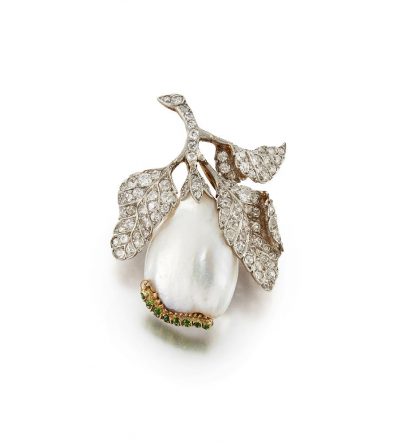 Accompanied by report number 218529488, dated 27th October 2017, from the Gemmological Institute of America, GIA, stating that the pearl was found to be Natural Pearl, Saltwater.

Founder, Henry Marcus emigrated to America from Germany in 1850, following from his initial employment at Tiffany & Co. he went on to set up partnerships, which remained in the family until 1941. The company were known for their innovative designs incorporating coloured stones and plique-a-jour enamelling, a trend that was very popular in French Art Nouveau jewellery at the time.

Pearls in ancient cultures were thought to be symbols of the moon holding magical powers. Later symbolising wisdom and elegance.

Cartier first started designing wristwatches around 1904 with the introduction of the Santos Designed by Louis Cartier and produced for the Aviator Aberto Santos-Dumont. This was followed by the introduction of the famous Baignoire and later Tank models which appeared as early as 1917.The Panthere Vendome with its typical Cartier look of elegance and slim case is another timeless model by this world recognised leader of watch design. The Cartier Panthere watch collection was originally created by Domique Perrin and the classic Vendome first appeared in the 1990s and is a

Specialist, Mark Bowis will be on hand to guide you through the collection and answer any questions; you can also pick up a fully illustrated catalogue of the 236 lot auction.

*Prices include Buyers Premium of 27.6%.