Historic ring worn by ‘Charge of the Light Brigade’ commander

LONDON: A sale of jewellery and watches at Roseberys London will include a fascinating group of rings - including one worn by Lord Cardigan, who led the Charge of the Light Brigade at the Battle of Balaclava during the Crimean War. The fine chased three-colour gold ring is believed to have been presented by a Captain Wethered to James Brudenell (1797-1868), 7th Earl of Cardigan, around the time he inherited the earldom from his father in 1837 - nearly 20 years before his famous exploits in the Crimean War (lot 223). Lord Cardigan is seen wearing the ring in a painting by English portraitist Richard Buckner. 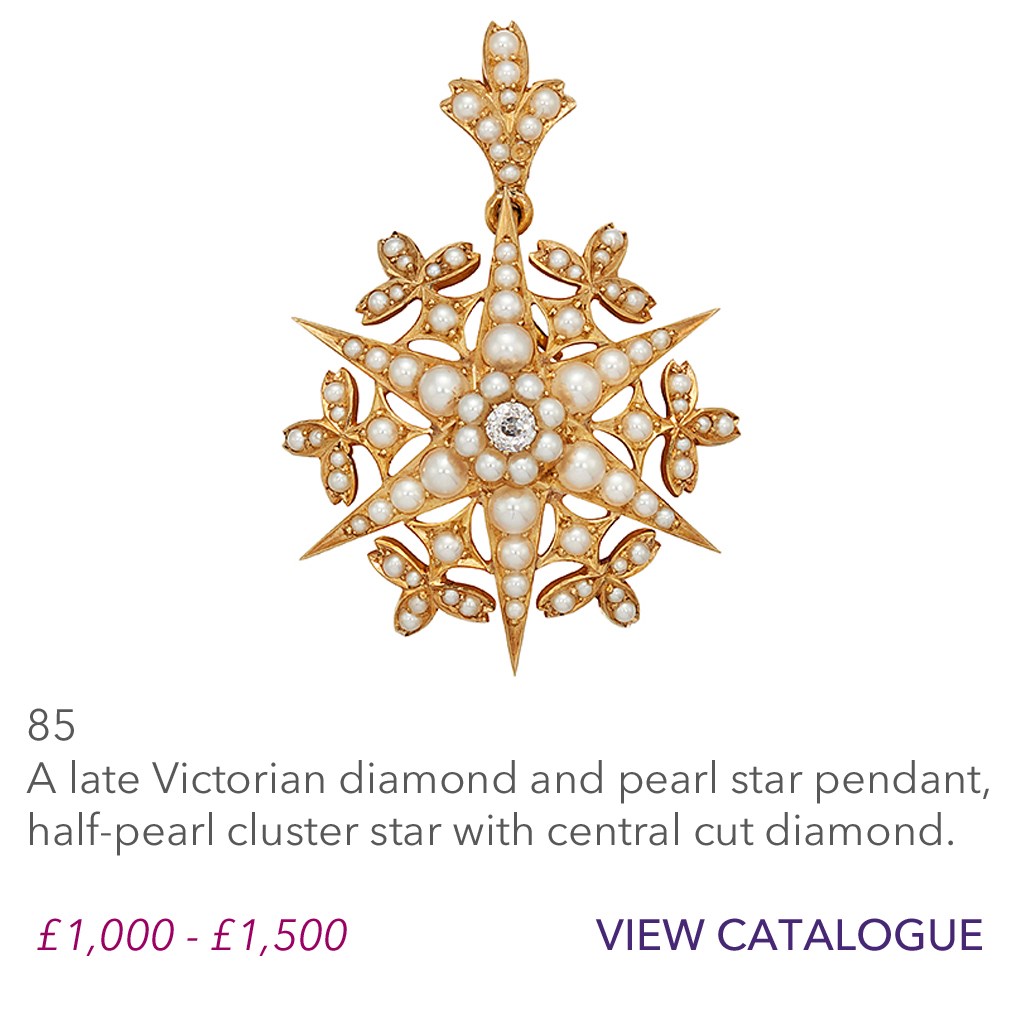 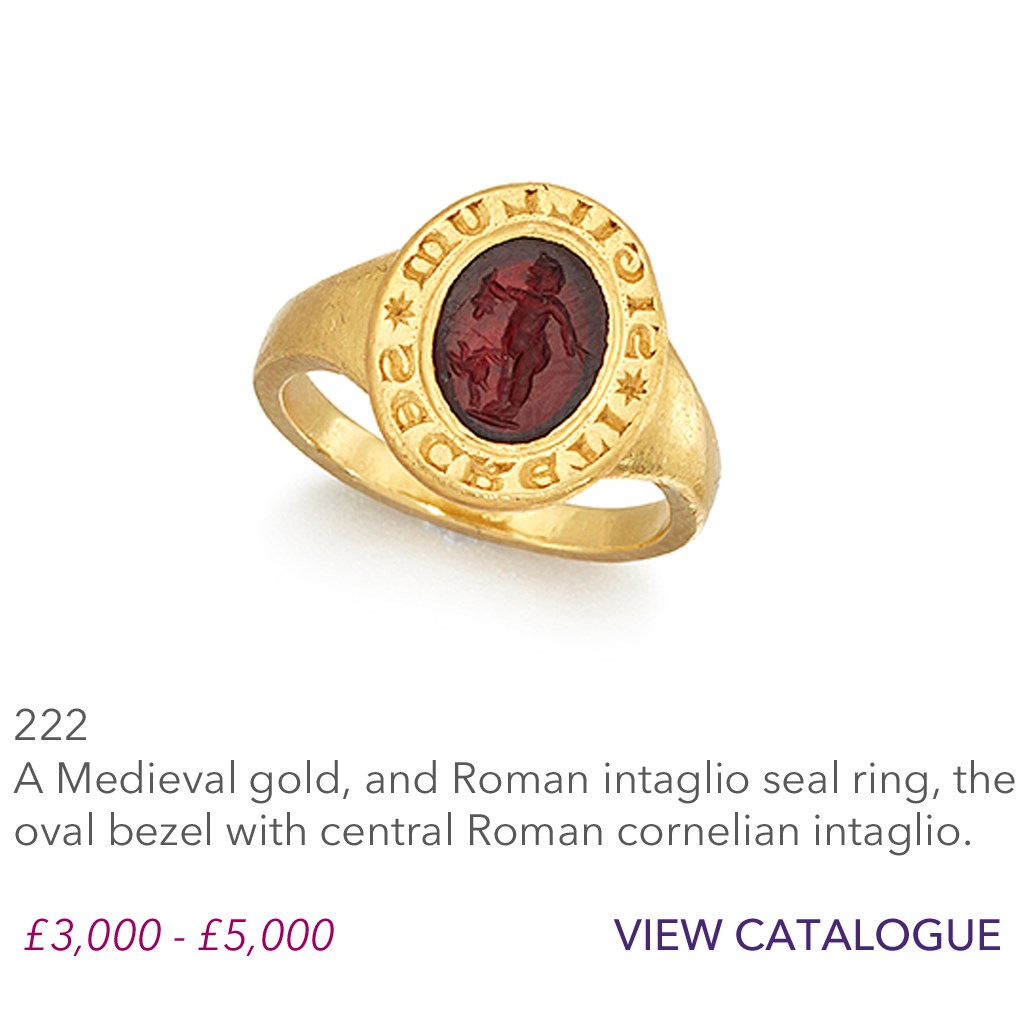 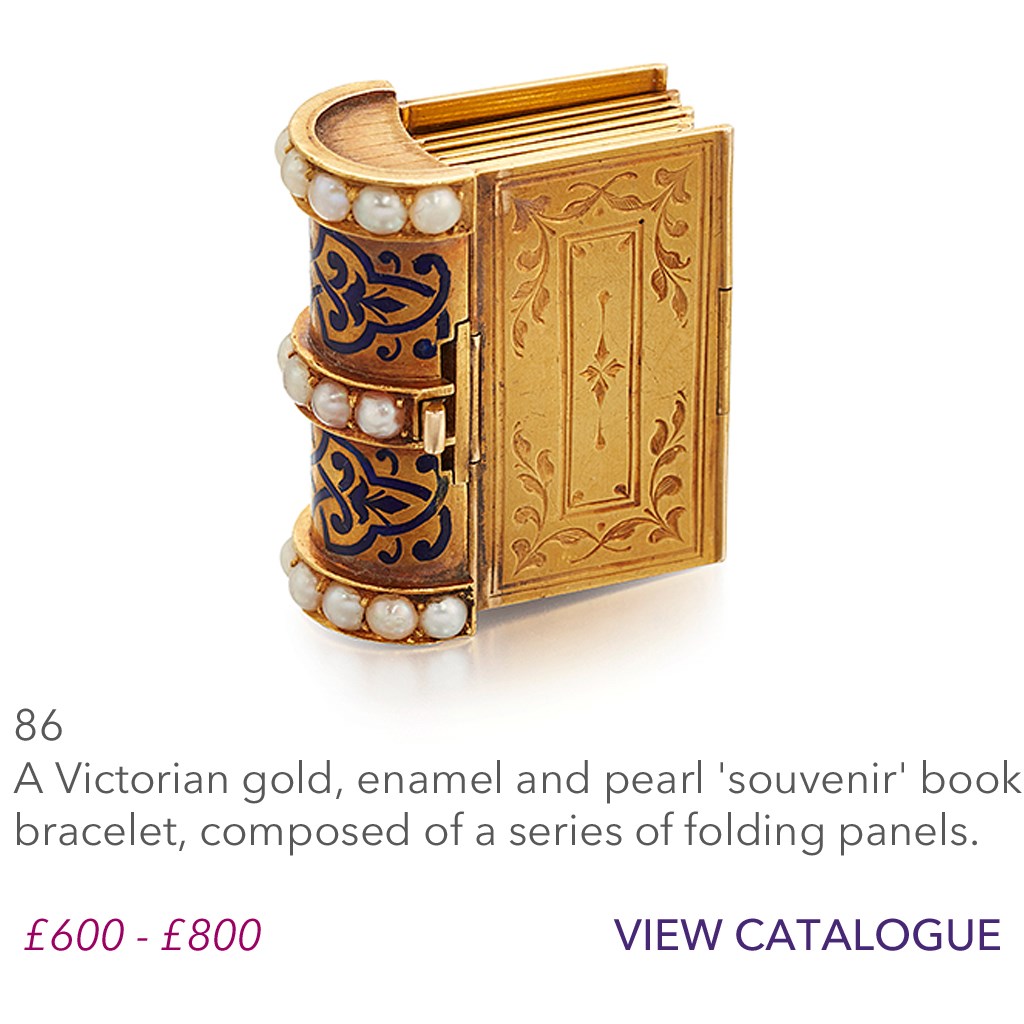 The inside hoop is engraved A TRIBUTE OF GRATITUDE To the Rt. Hon'ble the Earl of Cardigan, FROM CAPT. G.T. WETHERED. So far, we have been unable to ascertain the relationship or biographical details of Captain Wethered. Passed by descent and never offered at auction before, the ring is estimated at £2,000-3,000. Cardigan's military career began at the age of 22 when he formed his own troop of horse before joining the 8th King's Royal Irish Hussars at the age of 27. In 1830, by purchase of commission, he became a lieutenant colonel and was later appointed to command the 15th Kings Hussars. He was given the command of the 11th Hussars in 1836 – around the time he was given this ring. Cardigan’s most famous exploit came during the Crimean War when he led the Charge of the Light Brigade at the battle of Balaclava on 25th October 1854. A miscommunication in the chain of command saw Cardigan lead his light cavalry on a frontal assault against a heavily-equipped artillery battery. The Light Brigade reached the battery under withering direct fire and were forced to retreat immediately. The assault ended with high British casualties and no decisive gains. The manoeuvre cost the lives of about 107 out of the 674 men under Cardigan’s command. Cardigan himself was unscathed. He was later made Knight Commander of the Order of the Bath and appointed Colonel of the regiment of the 11th Hussars. He retired in 1866 and died soon after on March 28, 1868 from injuries sustained in a fall from his horse.

Another historic piece is a fine diamond enamel mourning ring commemorating the death of Lady Anna Maria Tollemache, Countess of Dysart (lot 224). Interesting mourning jewellery is highly collectable with this example containing a circular bezel with a glazed lock of hair and an applied pear-shaped old-brilliant-cut diamond with rose-cut diamond funerary urn motif. A legend to the tapering hoop reads: TO. THE. M'y. OF A.M: COUNTESS. OF. DYSART.14. SEPT. 1804. The Countess of Dysart was married to Wilbraham Tollemache, 6th Earl of Dysart, a British politician who sat in the House of Commons from 1771-84. He was a collector of art and a patron of John Constable and Sir Joshua Reynolds, both of whom painted portraits of Anna Maria. The ring is estimated at £2,000-4,000 and comes with its original ring box. 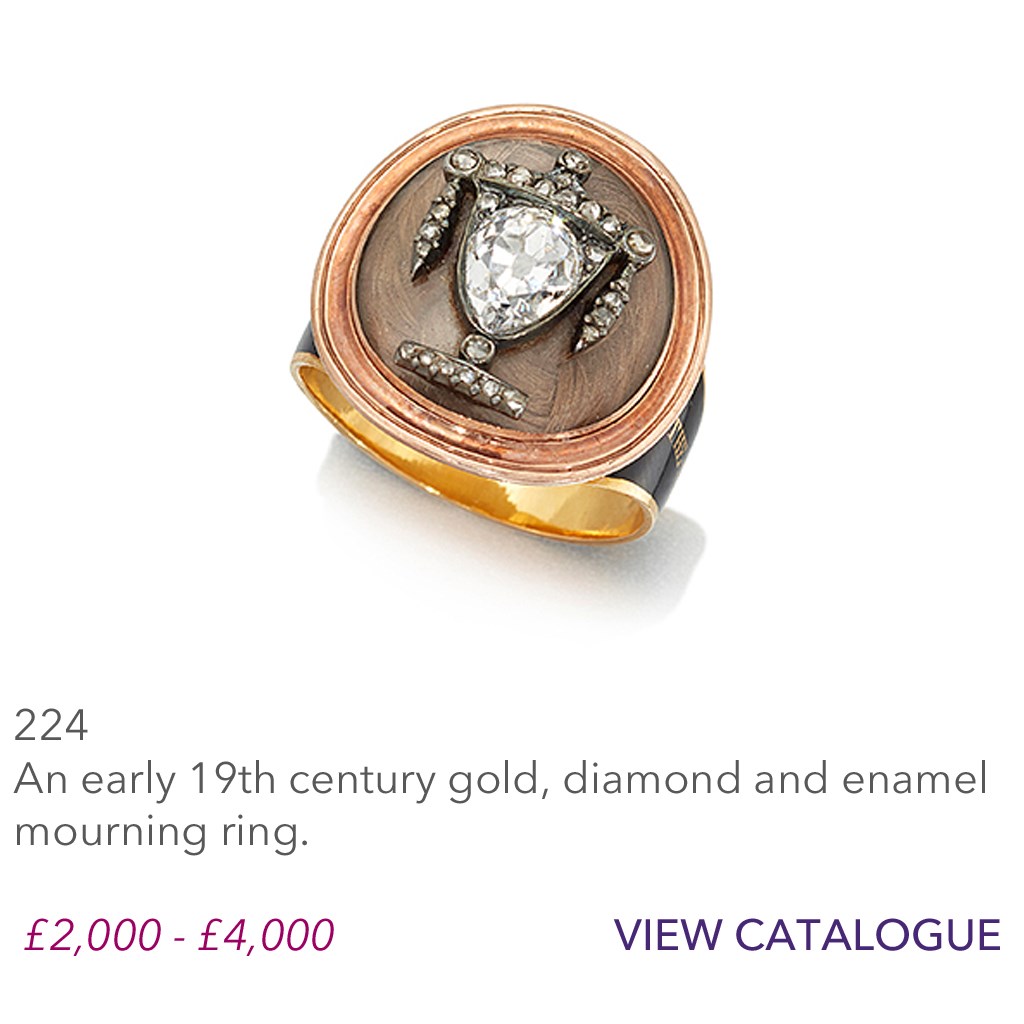 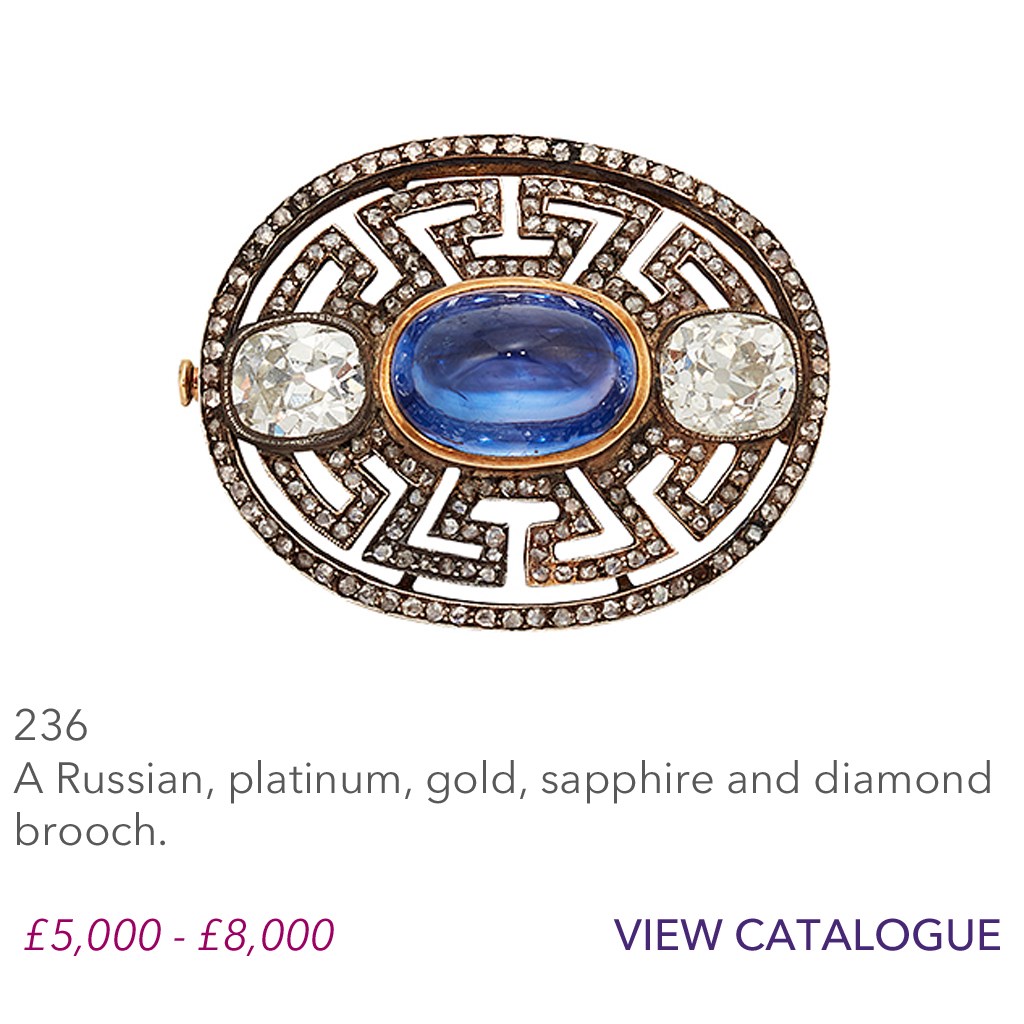 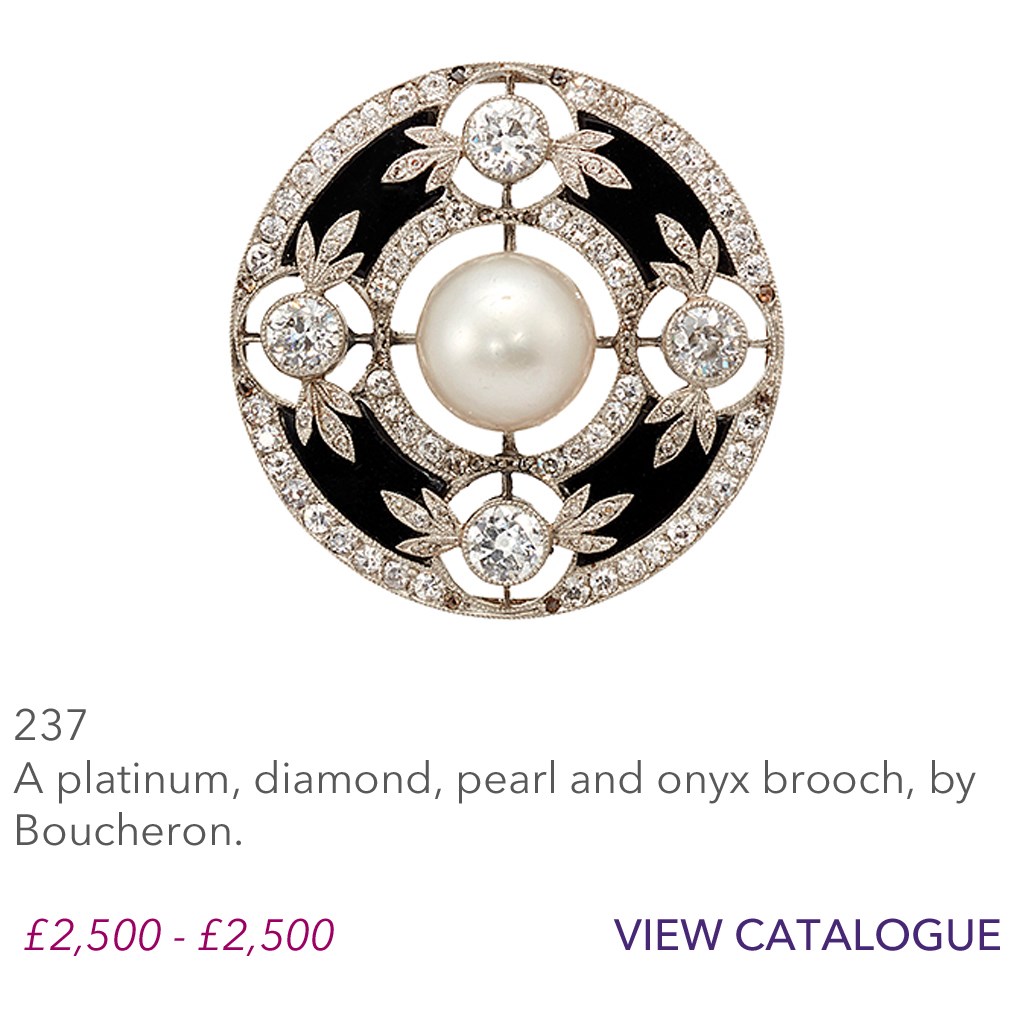 A Medieval 15th century gold ring with a central Roman intaglio of a putti teasing a rabbit with a carrot, c.200AD, is guided at £3,000-5,000 (lot 222). Engraved in Latin Sigilum Secreti to the gold border, this type of secret seal ring was thought to possess amuletic or magical properties. It comes from an American collection acquired in the 1980s.

Other rings include a French gold Art Nouveau band attributed to Paul Louchet (1854-1936) (lot 218). Paris-born Louchet studied with Jules Lefebvre and became well-known in Paris as a sculptor. Together with his brother, Albert, he opened a foundry in Paris where he cast his own work, as well as edited and designed other sculptors' works. The ring is modelled in high relief with the despairing figure of Eve, the serpent at her feet and apple tree branches bearing fruit extending through the shoulders. This fine piece carries a guide of £2,000-3,000.

The Belle Époque period is represented by several jewels including an outstanding platinum, cabochon emerald and diamond ring (lot 234). Jewels made during this time were arguably of the finest quality and have become highly sought after. The c.1915 ring, with a single collet-set cabochon emerald, pave circular-cut diamond pierced surround and tapering shoulders, is estimated at £3,000-5,000.

Also featured in the sale is a fine selection of jewellery ranging from the 18th century to the present day and a good collection of wristwatches and time pieces.A typical example of the Victorian pre-occupation with novelty is this gold, enamel and pearl ‘souvenir’ book bracelet (lot 86). The c.1845 piece is composed of a series of hinged panels each pierced with a letter spelling the word ‘souvenir’. The panels fold up and form a miniature book with a pearl and enamel spine. Extremely well made and consigned in a rare fitted case, the piece carries hopes of £600-800.

Another fine Victorian piece is a diamond and pearl star pendant that comes in immaculate condition with its original case and containing the alternative fittings for wear as a brooch or hair ornament (lot 85). The case is stamped T.R. Sachs, Practical Jeweller to the Queen & Royal Family, 22 Hyde Park Place. The c.1890 gold and half-pearl piece is typical of those produced in the late 19th and early 20th century England. It is estimated at £1,000-1,500.

Another brooch highlight is a quality Imperial Russian gold, sapphire and diamond piece, produced post 1908 in Moscow and designed as a rose-cut diamond-set openwork key pattern oval panel (lot 236). The sapphire is a strong limped blue and set off by two old-mine cut diamonds. “The craftsmanship is excellent and what one might expect from jewels produced in Imperial Russia during this period,” said Mark Bowis, head of the jewellery and watches department at Roseberys. It is estimated at £5,000-8,000.

The final lot in the sale is a classic diamond, pearl and black onyx brooch by French jewellers Boucheron, guided at £2,500-3,500 (lot 237). Produced in c.1915, it has a circular panel with central bouton pearl measuring approximately 10mm in diameter set within millegrain-set old-brilliant-cut diamonds and black onyx plaques.