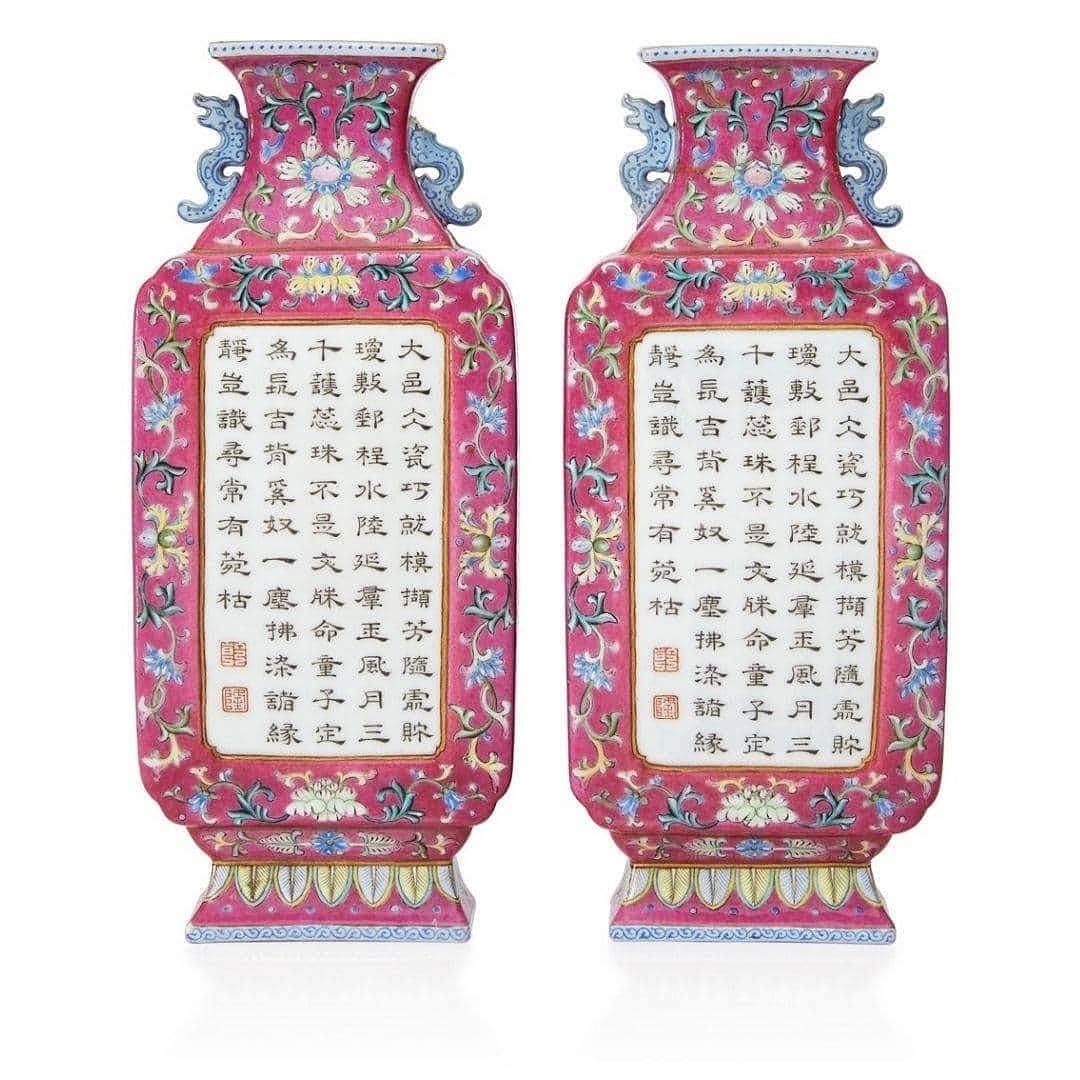 “Undoubtedly, we were vindicated in our decision to postpone May’s sale until July, as it allowed prospective buyers to attend our viewing days by appointment, and handle objects in the flesh. This enabled us to offer some of the very finest and rarest objects from China and Southeast Asia and achieve the best possible results. It was a tremendous privilege to sell this pair of porcelain wall pockets made in the imperial kilns during the reign of Emperor Qianlong. Emperor Qianlong was arguably one of the greatest collectors of art and these vases, likely to have been commissioned by him, reflect this through their complex potting, impeccable painted decoration in enamels, and the inscription of an ancient poem.” Bill Forrest, Head of the Chinese, Japanese & South East Asian Art Department

LONDON: An exquisite pair of Chinese imperially inscribed wall vases realised a staggering £324,500 at Roseberys £1.14m sale of art and antiques from China, Japan and South East Asia. Chased by nine determined bidders including one who added £80,000 in a single bid, the pair soared above the pre-sale estimate of £20,000-30,000 in the auction held on July 28. They eventually sold to a Chinese agent in the room on behalf of a Chinese collector after 15 minutes of bidding.

“The couple who consigned the vases were of course delighted when they heard the result. They were so pleased that we spotted the vases among the contents of their house as they were in the process of downsizing and disposing of most of their possessions and had never looked at them closely enough to appreciate their true worth. I was told that they had been furnishing a mantelpiece for many years and may or may not have made the cut to be moved to their new house. Like many inherited objects, one attaches a certain degree of sentimental value but may not appreciate their true value. We have been truly privileged to be custodians of these wonderful objects, and thanks to a hugely successful sale, we have found them a new home.” - Bill Forrest, Head of Chinese, Japanese & South East Asian Art auction

The imperially inscribed Qianlong mark and period porcelain wall vases were inherited in c.1950 and came from a private West London address. The Imperial poem inscribed on each was composed by the Emperor Qianlong apparently to express his delight in seeing a wall vase filled with a flower hanging inside of his sedan chair on the way to a hunting trip. Of the 300 or so Qianlong wall vases recorded in the collection of the Palace Museum in Beijing, only half are inscribed with poems by the emperor. Wall vases, also known as wall pockets or sedan chair vases, became one of the Qianlong Emperor’s favourite types and developed significantly during his reign. Pairs are seldom offered on the market. Enhancing their rarity further was the yangcai decoration, introduced by European Jesuit craftsmen to the Qing court around 1685. Developed in the Jingdezhen imperial workshops under the patronage of the Qianlong Emperor, it is representative of the superb quality of porcelain production achieved during the Qianlong reign. [Lot 87] 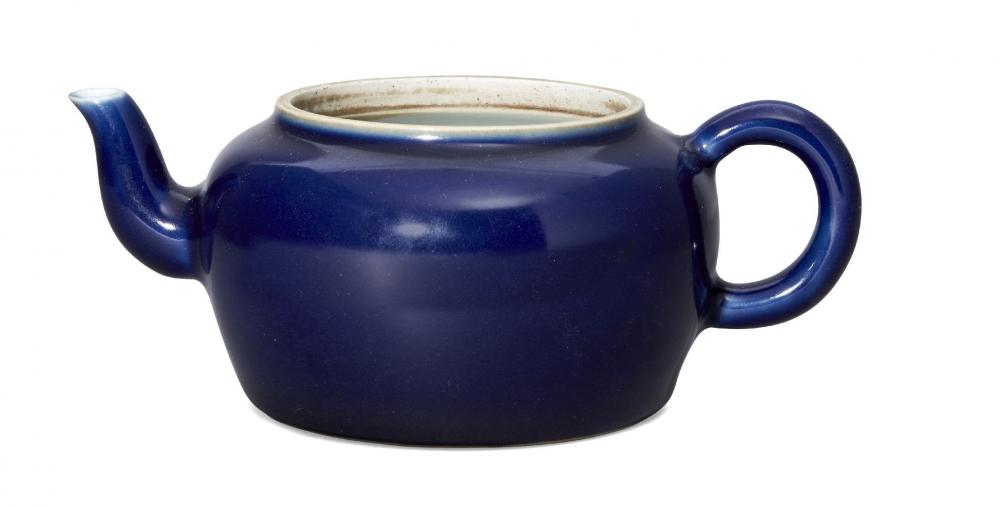 A Chinese porcelain monochrome blue-glazed teapot, Yongzheng mark and of the period 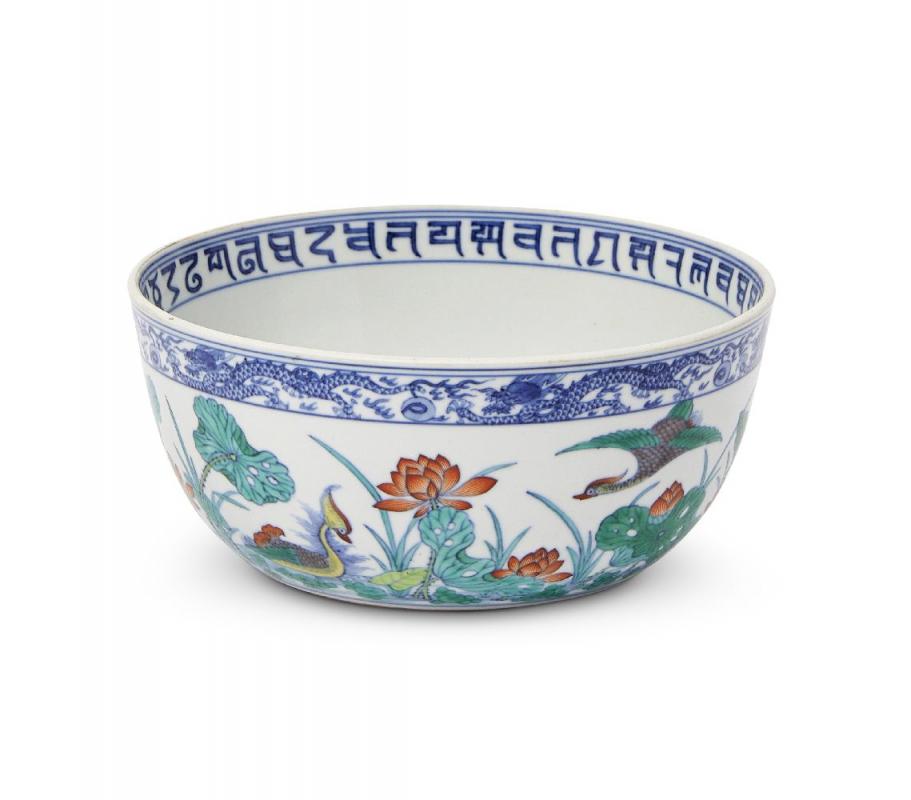 A fine Chinese porcelain doucai bowl, Jiaqing mark and of the period

Other prized rarities in the 630-lot sale included lot 45, a Chinese porcelain monochrome blue-glazed teapot with a period Yongzheng mark, which raced away to £52,500 and lot 86, a fine Chinese imperial porcelain doucai marriage bowl, spotted in a kitchen cabinet five minutes from Roseberys, making £37,500. The latter was delicately detailed with mandarin ducks swimming amidst large lotus blooms and was notable for its period Jiaqing mark (most examples bear a later Daoguang mark). [Lot 86] [Lot 45] 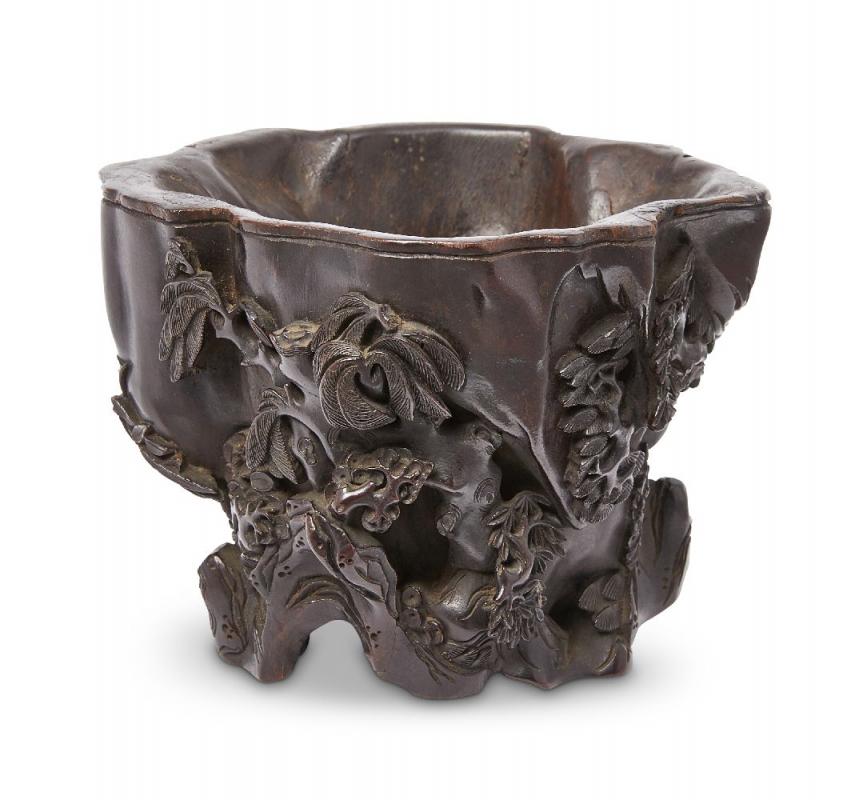 A rare 17th/18th century Chinese carved chenxiangmu (aloeswood) brush pot, finely carved with bamboo and pine trees, soared above estimate to sell for £27,500. The cup came from a private West Country collection and had been inherited from the grandparents of the vendor in the 1960s.
A multi-estimate bid of £26,250 secured a mid-20th century Chinese porcelain garlic-head vase with a label for Peter Wain, the respected Shropshire dealer in oriental ceramics. It was finely painted to the bulbous body with a father and son repairing a railroad in a winter landscape and bore a Jingdezhen factory seal mark to the base.

A Chinese porcelain powder blue ground Kangxi period bottle vase, noted for its large size and rare underglaze of blue and copper red, smashed its estimate of £5,000-7,000 to sell for £23,700. The 41cm high piece, featuring a dragon to the slender neck and two mythical beasts to the body, came from a private collection in Germany and was acquired by the vendor’s family prior to 1920. [Lot 296] [Lot 90] [Lot 37] Bidders also clamoured to own a pair of early Chinese black lacquer and inlaid cabinets dating to the late Qing dynasty. Each door was set with semi-precious stones and decorated with figures in landscapes. Estimated at £300-500, it went on to sell for £22,500. [Lot 353] A bid of £12,500 secured a Chinese painted enamel 'dragon and bats' dish similar to an example found in the British Museum. From the Qianlong period, it was decorated to the central reserve with a forward-facing dragon amidst clouds and flames. [Lot 343] Further highlights include a rare Chinese porcelain 'three friends of winter' wine cup from the collection of the late Jonas G Gadelius and his wife Gabita, which took £15,000. It had a period Jiajing mark and was painted in underglaze blue and yellow enamel with pine, prunus, and bamboo to the exterior. An 18th century Sino-Tibetan gilt bronze figure of Tara that had been acquired in 1970 in Kathmandu improved upon presale hopes to sell for £8,125. [Lot 84] [Lot 490]

The next auction will take place on Wednesday 11 November

If you wish to submit an item into the auction email details to asian@roseberys.co.uk for a complimentary valuation