Roseberys are proud to present the Islamic Arts and Manuscripts, including Antiquities, auction that will take place on Wednesday 31st  March, starting at 12 noon. It is the first of three auctions from the Islamic and Indian Arts department that will take place this year that offer metalwork, pottery, manuscripts, glass, decorative arts, paintings and textiles, from the Islamic and Indian areas from the mid-7th century to contemporary works.

Alice Bailey, Head of the Islamic & India Arts department comments: ‘ The March 31st sale features 320 lots of Antiquities and Islamic arts, including manuscripts and contemporary Islamic works. Of particular interest are the ceramics, textiles and metalwork from the Private collection of Werner Forman (1921-1910). Czech-born art photographer Werner spent his life travelling the world, photographing works of art from museums, private collections and archaeological sites. The award-winning photographer built an extensive and eclectic collection that included antiquities, Islamic, Indian, Tribal and Asian art. He bought from dealers and auctions worldwide from the 1950s through to the 1990s. The sale also features ceramics from the collection of Byzantinist Theo Sarmas (1938-2018) (lots 145-161). Early Canakkale from his collection complements other Kutahya, Iznik and Byzantine pottery in the sale. The manuscripts section includes Ottoman Qur’ans and manuscripts, a fine Qajar Qur’an with the personal seal of Qajar prince Farhad Mirza Mo’tamad Al- Dawla (1818-1888) (lot 89), and several copies of the Zad Al-Ma’ad book of Shi’ite prayers (lots 90, 121, 122). There is also a 17th century calligraphy by Zarrin Qalam ( lot 80), renowned calligrapher at the Mughal court of Akbar Shah, a number of 18th century engravings (lots 138-142) and a very large reproduction print of Nicolas Louis de Lespinasse’s Vue de La Mecque (lot 143). A number of works, from a private diplomatic collection, are also of note including a dated Ottoman carnelian taxation seal (lot 257), a collection of Luristan bronzes (lots 3-6), and a Safavid engraved copper bowl (lot 243). Contemporary works round off the sale and include Syrian, Iraqi, Egyptian and Iranian artists including Hossein Khosrojerdi, Siamak Filizadeh, Rafa Nasiri and Rakan Dabdoub.’ 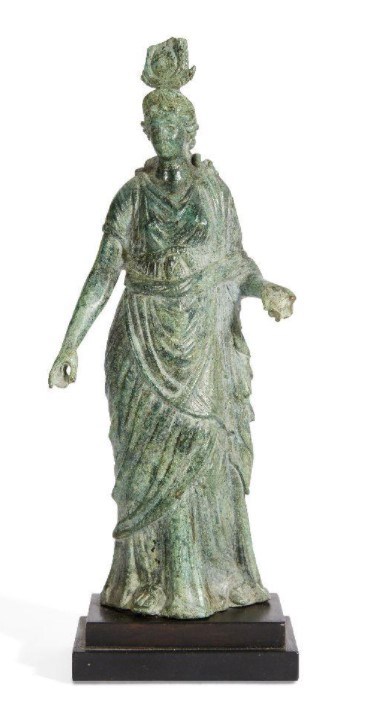 Leading the highlights within the sale is lot 37, a Hellenistic bronze statue of the Isis Fortuna, 1st Century B.C. Estimated to make £10,000 - £15,000, the goddess measuring 20cm high stands with her weight on her right leg, wearing a chiton and himation failing in soft folds to the ground. Her extended left hand would originally have held a cornucopia and her right would have held a ship's rudder, her hair is crowned by a diadem and Isis horns with two long curls falling below her shoulders. The Egyptian goddess Isis was adopted into Roman religion in the first century B.C. She possessed a wide range of powers, including the ability to offer her followers a better afterlife. In Roman religion, she was often merged with other Roman goddesses, creating new composite deities. This statuette portrays Isis combined with Fortuna, a fertility goddess who controlled the fate of both individuals and cities. The bronze statue comes with a provenance from a private collection in the UK; acquired by Rupert Wace Ancient Art in 2004 and formerly in a German Private Collection.

A Luristan ‘standard’ or finial, made for mounting on a wooden stick, South West Iran, 9th-early 7th century B.C.

Entered onto the market at £500 - £700 is lot 6, a Luristan ‘standard’ or finial from South West Iran. It was created for mounting on a wooden stick in the 9th-early to 7th century B.C. Measuring 20.8cm and cast in bronze, it was made by the lost-wax method, also known as cire-perdue, method of metal casting in which a molten metal is poured into a mold that has been created by means of a wax model. Once the mold is made, the wax model is melted and drained away. The design depicts a Janus head gripping two animals which are about to bite him, the bands round his waist may have mimicked bands which bound the figurine to the wooden stick. The lower half of the standard includes legs both of the animals and the man in its design. Lot 6 was acquired by Eric Crowe, son of diplomat Sir Eyre Crowe (1864-1925), when he was posted to Tehran as a British diplomat between 1939-41 and thence by descent to Sir Brian Crowe (1938-2020) and family. 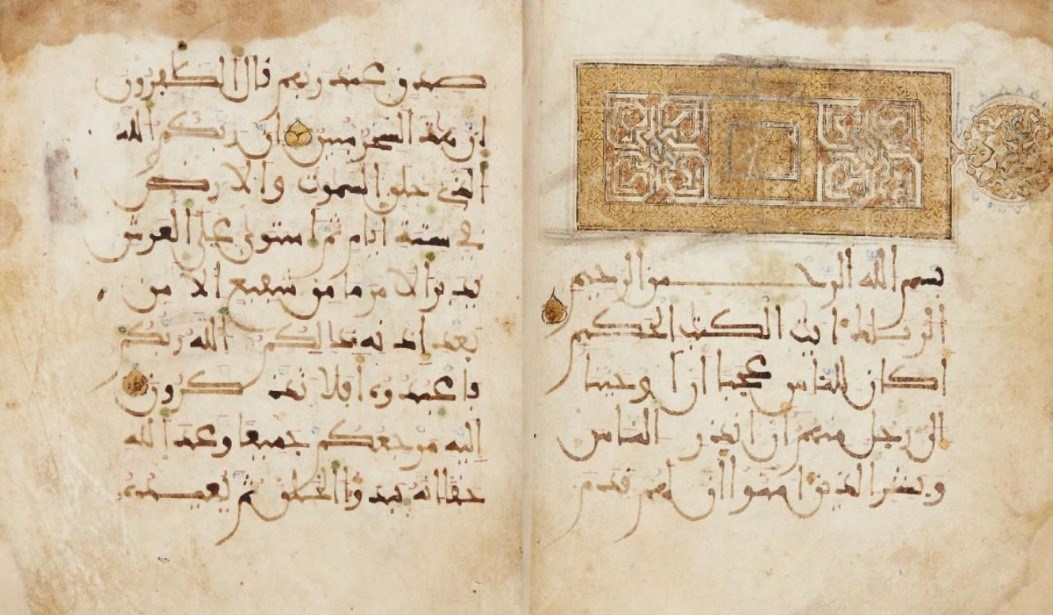 An Illuminated Qur’an Section on vellum, North Africa or Al-Andalus, circa 13th century

Leading the highlight Qur’ans, on offer in the auction, with an estimate of £3,000 - £5,000, is lot 61, a North African or Al-Andalus Illuminated Qur’an Section on vellum, circa 13th century, 69ff. The Arabic manuscript on vellum, with 9ll. of black sepia Maghrebi script per page, has gold marginal decorations and gold rosette verse markers. It begins with Qur’an X (sura Yunus) and ends with Qur’an XIII (sura ra’d), verse headers in gold Kufic script with gold palmette. It was later bound in brown leather binding with tooled medallion. 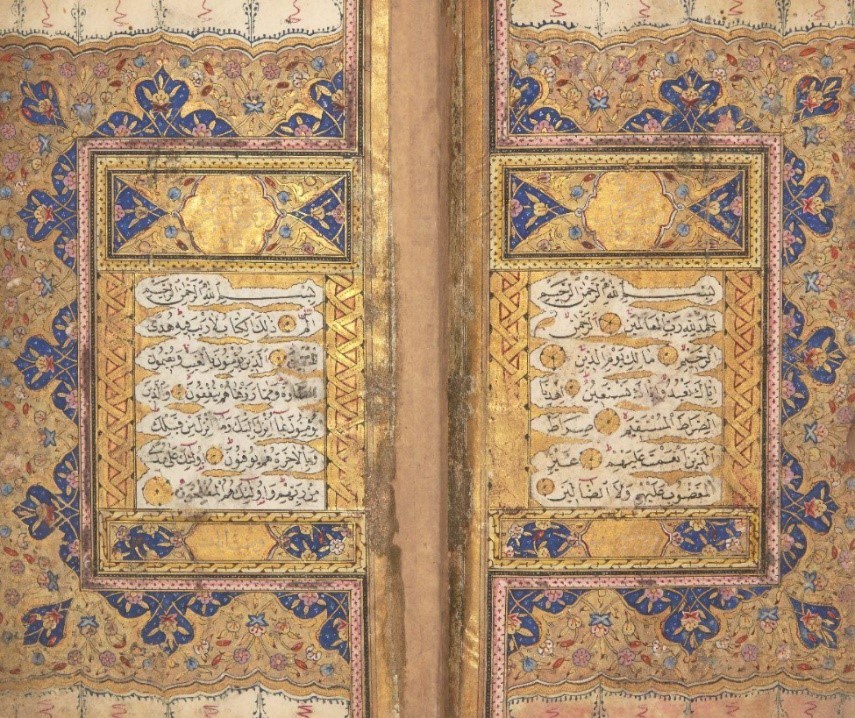 Lot 99, included in the auction, is a Qur'an from Ottoman Turkey, dated 1232AH/1816-17AD. The Qur'an is signed Ahmad known as Najib a student of Al-Sayyid Muhammad As'Ad Al-Nuri and if on offer with an estimate of £1,000 - £2,000. The Arabic manuscript is on paper, 303ff. plus two fly-leaves, each folio with 15ll. of black naskh script, with gold roundel verse markers outlined in black with polychrome, sura headings in white thuluth script on gold ground within illuminated cartouche, with marginal illuminated section markers in the form of palmettes. The opening bifolio is illuminated in gold and polychrome, colophon signed and dated, with catchwords, slightly trimmed. The Qur'an is in gilt brown morocco binding with flap. 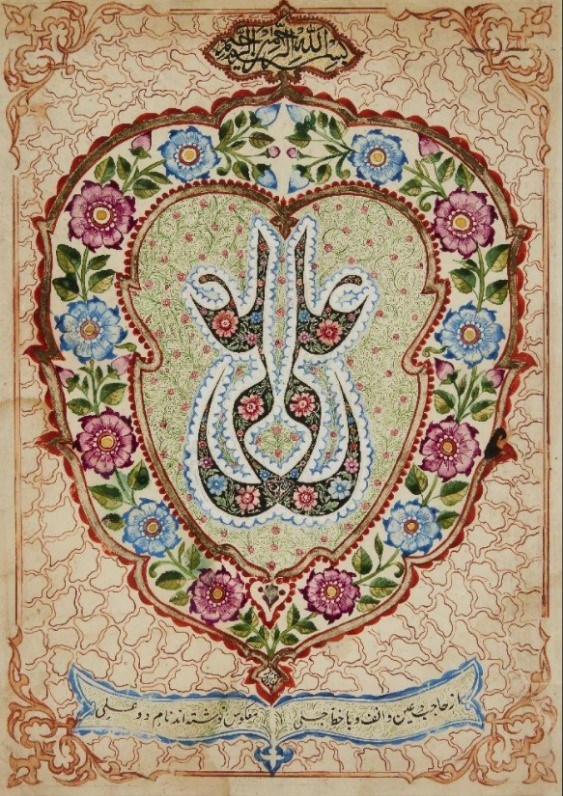 A Qajar mirrored calligraphic panel in the form of a lion's head with the name of Imam 'Ali, signed Taj al-Din, Iran, late 19th century

Entered onto the market at £400 - £600 is lot 117, a Qajar mirrored calligraphic panel from Iran, made in the late 19th century.  The Qajar that measures 32.5 x 23cm is in the form of a lion's head with the name of Imam 'Ali, signed Taj al-Din, on opaque pigments on paper, with large, central lozenge with floral border enclosing a mirror image inscription filled with flowers on a black ground. It is inscribed above and below, mounted, glazed and framed. The inscription in Farsi, below the composition, explains that it is a mirrored calligraphy (khatt jali ma’kus) with the name of ‘Ali formed as a ‘brow, eye and nose’. The lion is traditionally associated with Imam ‘Ali.


Lot 156 is a rare early Canakkale bowl from Turkey, circa 1750. The underglaze of the bowl is painted in blue with a raised red with central flowerhead and abstract design to rim. It is on offer with an estimate of £200 - £400. The bowl comes with a provenance from the Theo Sarmas (d. 2018) collection in London since early 1960s. Theo Sarmas was a London businessman who was a passionate collector of Byzantine ceramics and Greek coinage. Princeton University in New Jersey now holds the Theo Sarmas collection of medieval Greek coinage. 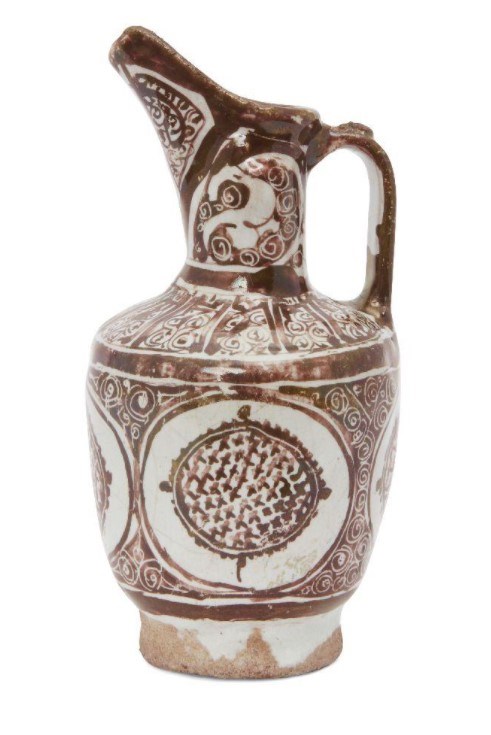 This small intact Kashan lustre pottery ewer (lot 204) from Iran made in the 12th century is estimated to make £2,500 - £3,500. The ewer that measures 14.2cm. high is decorated in golden brown-coloured lustre on an opaque white glaze. The body is adorned with a a series of roundels containing medallions with cross designs on a ground of tight scrolls, the shoulder with pseudo-inscriptions on ground of scrolls and the handle with chevron design. It was formerly in the private collection of Mr. Ishiguro, purchased from the Mikazuki Gallery, Tokyo, Japan on 25th May 1977. 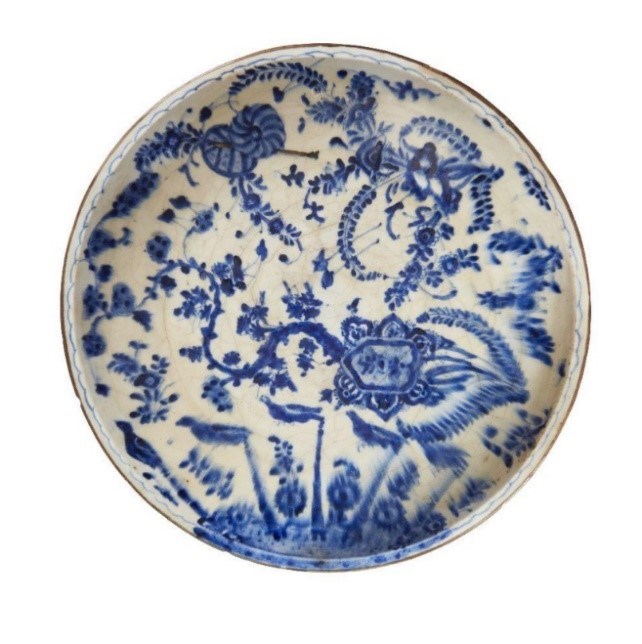 
Another highlighted ceramic item on offer within the sale is lot 233. The large Kutahya blue and white pottery charger from Turkey, 16th century has been entered onto the market with an estimate of £500 - £800. The pottery charger is decorated to interior with leaves, flowers and fruits. It comes with a provenance from Werner Forman (1921-2010), acquired Delehar Antiquities and Works of Art Portobello, 5th July 1964. 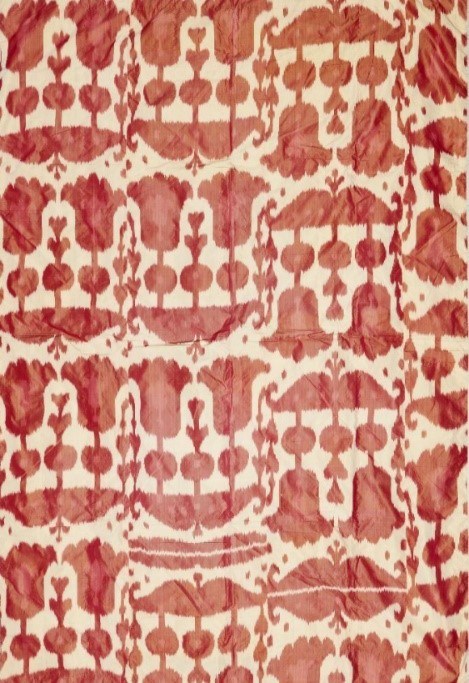 A highlight textile lot on offer within the sale is an Ikat panel (lot 301) from Central Asia made in the late 19th-early 20th century. The Ikat panel of rectangular form is woven in silk with an abstract floral design in red and measures 200 x 150 cm.  It comes with an estimate of £300 - £500. 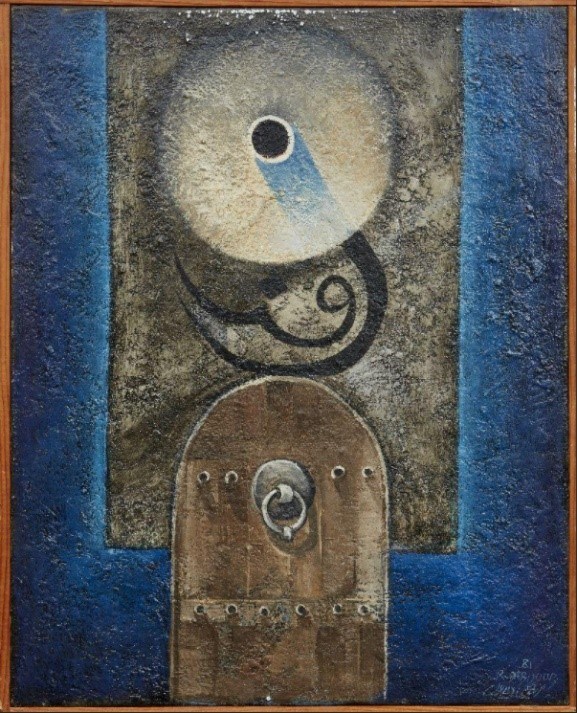 Completing the highlights on offer within the sale is an oil on canvas by Iraqi artist, Rakan Dabdoub. (Iraqi, b.1921-2017). The untitled work that was created in 1981 is estimated to make £4,000 - £6,000. Receiving his degree in 1961 at the Institute of Fine Arts in Baghdad, Rakan Dabdoub joined the Academy of Fine Arts in Rome. These were his first steps into developing the basis for his artistic style and his departure from the specificity he was taught in Baghdad. He became a distinguished artist after he participated in the Exhibition of Arab Artists held in Rome in the 1960’s. When he returned to Mosul after his expeditions in Italy, he became a teacher at the University of Mosul in the Engineering Department. He retired as a teacher in 1993 and continued to paint and contribute to several exhibitions in and out of Iraq. Works by Rakan Dabdoub have sold at Christie's Dubai Post-War and Contemporary Art in 19 March 2014, Lot 110; 18 March 2017 Lot 38 and 22 March 2018. The contemporary work on offer was purchased from the artist by the vendor's father in Mosul, Iraq in early 1981-2.