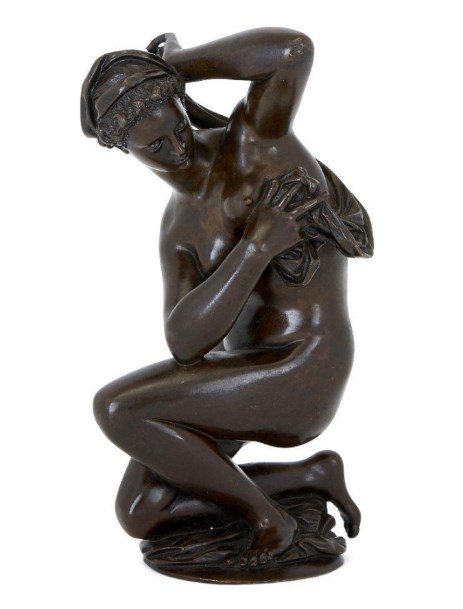 A bronze model of the Bathing Venus, after Giambologna, 19th century on offer within the Fine & Decorative auction on 21 July, 2021 at Roseberys

The term “Grand Tour” was introduced by Richard Lassels in his 1670 book Voyage to Italy. From the middle of the 17th century, wealthy, young graduates of Oxbridge Universities began embarking on trips around Europe and North Africa, for any length of time from months to years. The purpose of these voyages was to learn about the roots of European culture through art, literature, music and archaeology.  Furthermore, it was seen as an essential and fashionable part of their education. These long sojourns then became a custom of the other socially elite of Europe, beginning in the late 17th century, and grew in popularity until the middle of the 19th century.  These tours were so popular that by the second half of the 18th century wealthy young men and (few) women from North and South America also travelled abroad, after the American Revolution. 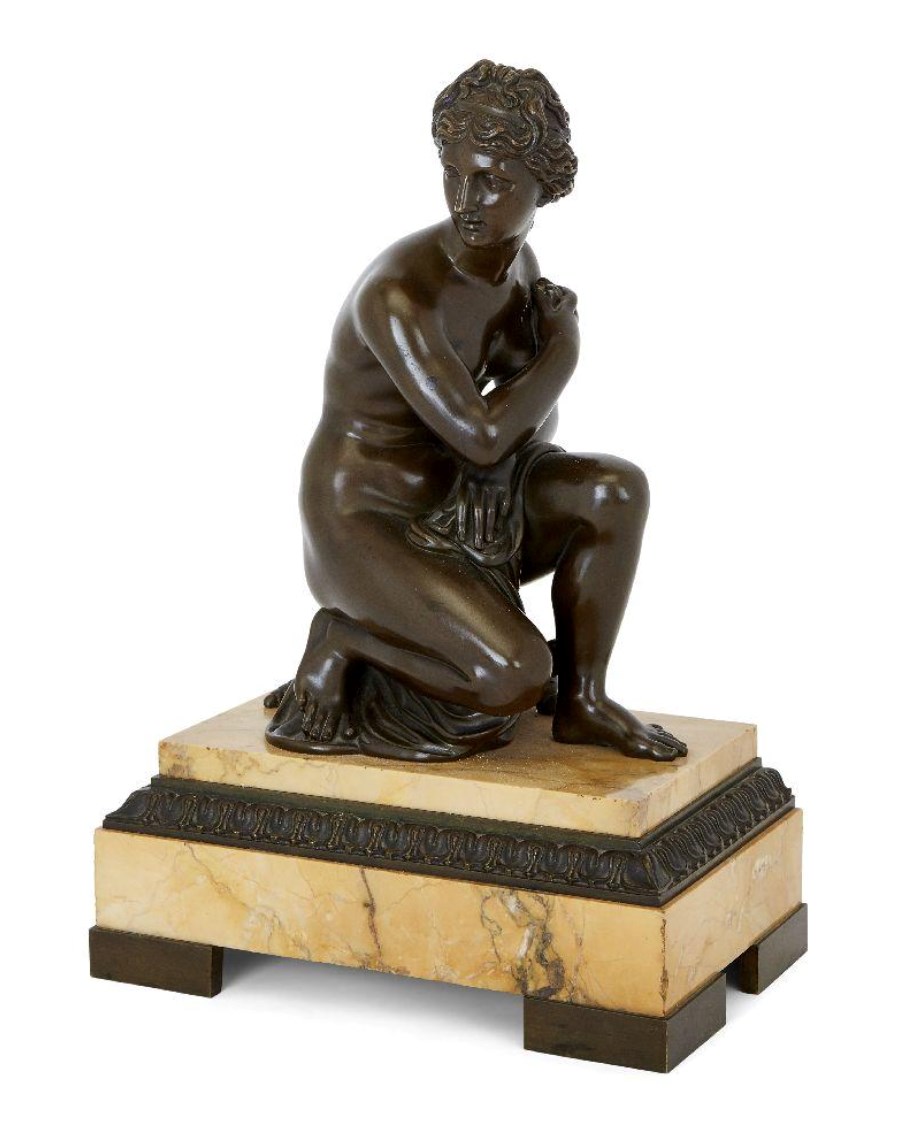 A French bronze model of the Crouching Venus, after the model by Antoine Coysevox (1640-1720), mid-19th century on offer within the Fine & Decorative auction on 21 July, 2021 at Roseberys

Tourists would travel with guides and chaperones through countries such as Germany, Switzerland, Austria, France, North Africa and the Holy Lands — and most importantly, Italy. The requisite stops were Paris, Florence, Venice and Rome. As a result, the Grand Tour produced gentleman scientists, authors, antiquaries and patrons of the arts. With the money to spend and aristocratic connections, these privileged travellers would socialise their way across the Continent, perfecting their language skills, while visiting ancient ruins and made important social contacts. Since there were few museums anywhere in Europe before the close of the 18th century, Grand Tourists often saw paintings and sculptures by gaining admission to private collections.

As part of this Grand Tour tradition, travellers would acquire and collect artwork and souvenirs as mementos of their travels, that would otherwise be unavailable, lending an air of accomplishment and prestige to the home, once they returned. They would meet with local artists and dealers to collect the souvenirs. The souvenirs these discerning travellers brought back with them were copies of the classical sculptures, monuments and buildings or ruins that they visited on their trip, similar to the notion of souvenirs picked up today.  Some other examples of souvenirs that would have been attractive to travellers were artworks, objets d’art, furniture and jewellery utilising the ancient technique of micro-mosaic. Made with the aristocratic buyers in mind, the souvenirs were top quality, including bronze, marble, alabaster and serpentine, with classical pieces, reproduced by famous 19th century Italian workshops including the Sommer and De Angelis foundries. 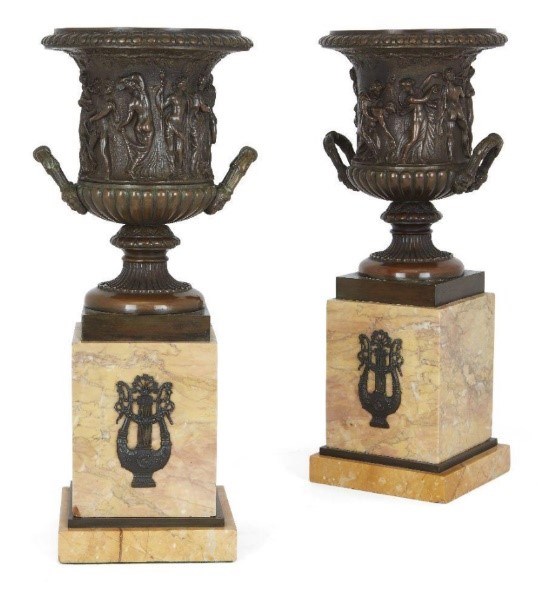 A pair of French bronze models of the Borghese vase, 20th century on offer within the Fine & Decorative auction on 21 July, 2021 at Roseberys

These glamourous souvenirs would then be shipped back to the new owner’s home where they would furnish stately homes, serving as symbols of their owner's worldliness and appreciation for the ancient culture. At the time, they served as the pinnacle of informed taste. Collecting became a trend of the day. 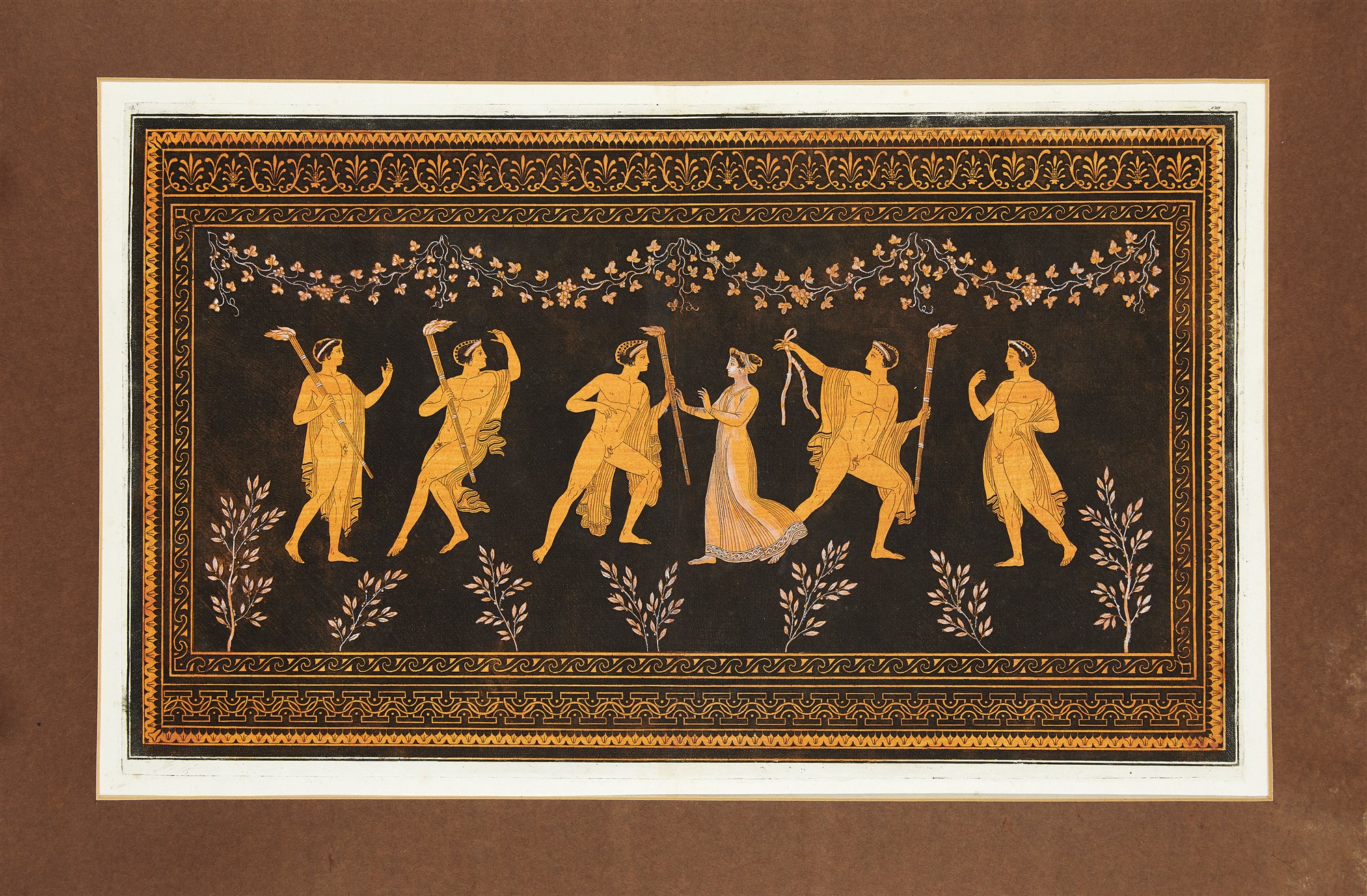 These souvenirs, were gathered by influential men, such as the architect Sir John Soane and the diplomat Sir William Hamilton.  The Fine & Decorative sale on 21 July offers five hand-coloured engravings of vase designs from Hamilton’s collection (lot 266).  Hamilton began collecting Greek vases and other antiquities as soon as he arrived in Naples in 1764, obtaining them from dealers or other collectors, or even opening tombs himself. In 1766–67 he published a volume of engravings of his collection entitled Collection of Etruscan, Greek, and Roman antiquities from the cabinet of the Honble. Wm. Hamilton, His Britannick Maiesty's envoy extraordinary at the Court of Naples.

Lasting for over three-hundred years, the Grand Tour was considered by many to be a necessary tradition. The Grand Tour as an institution was ultimately worthwhile for national culture as well as for individuals as the tour has been given credit for an incredible transformation in British architecture and culture. 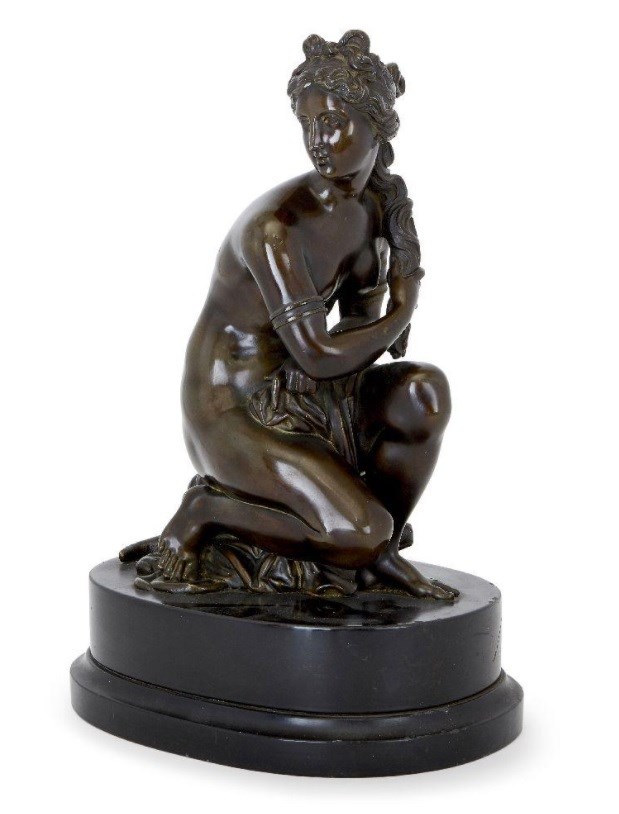 A French bronze model of the Crouching Venus, after the model by Antoine Coysevox (1640-1720), late 19th century on offer within the Fine & Decorative auction on 21 July, 2021 at Roseberys

One can still see grand tour treasures on mantles and in vignettes in many of England's great houses today. The souvenirs these grand tour travellers brought back are still considered a tasteful form of decorating, even in today's interiors. Pure timeless classicism, these beautiful objects compliment both contemporary and period interiors.

You can find out more about these lots in the sale here.