Over 700 lots of Asian Art, from Chinese archaic bronzes to Japanese prints and Singaporean Modern art, went under the hammer at Roseberys on 11 November. 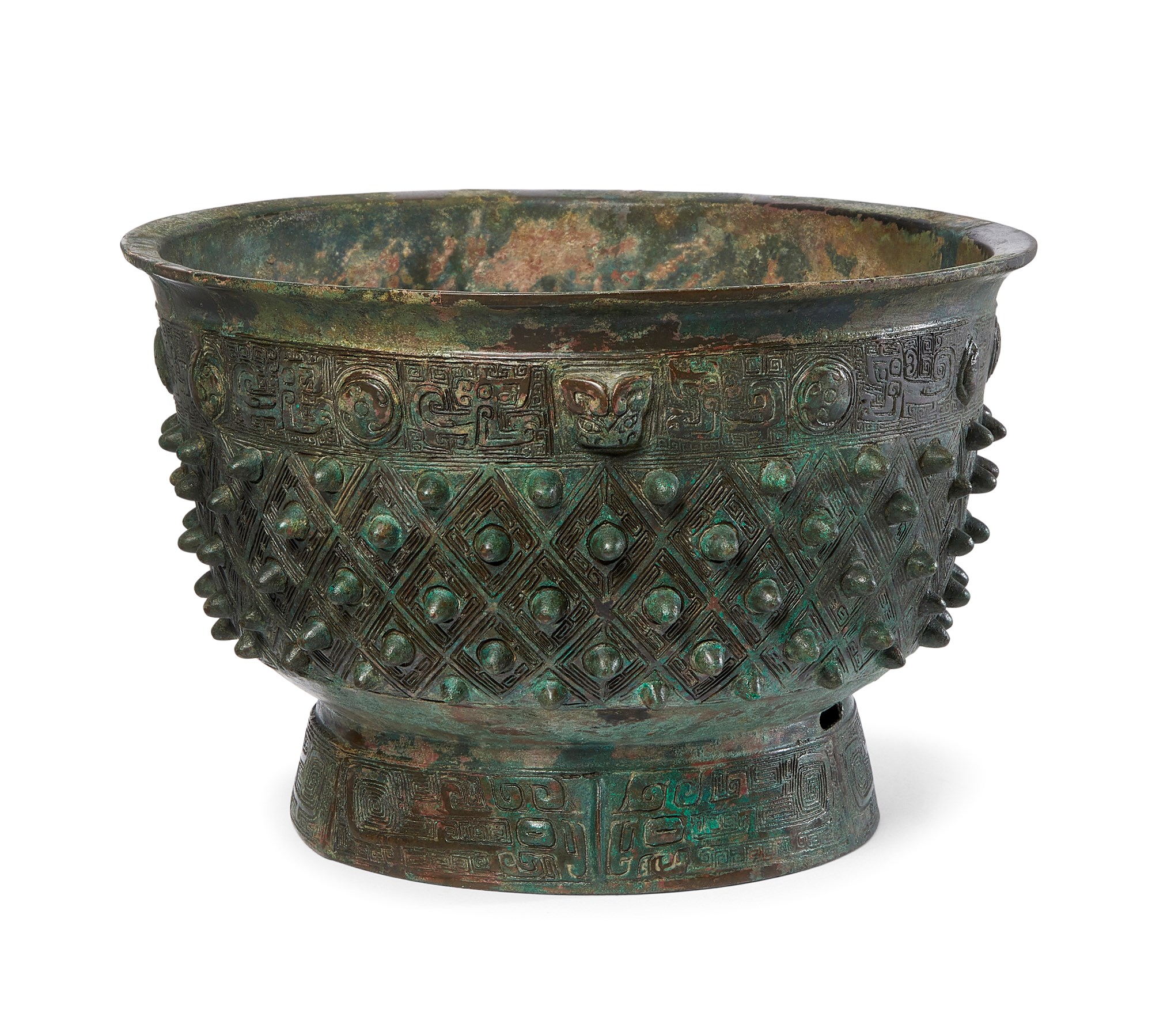 Bill Forrest, Head of Department commented on the sale, ‘In spite of the ongoing challenges presented by the global pandemic, we were delighted with the overall result of the sale which was conducted entirely online.  The market continues to remain very buoyant if selective, illustrated by the strong results for items from the van Daalen collection.’ 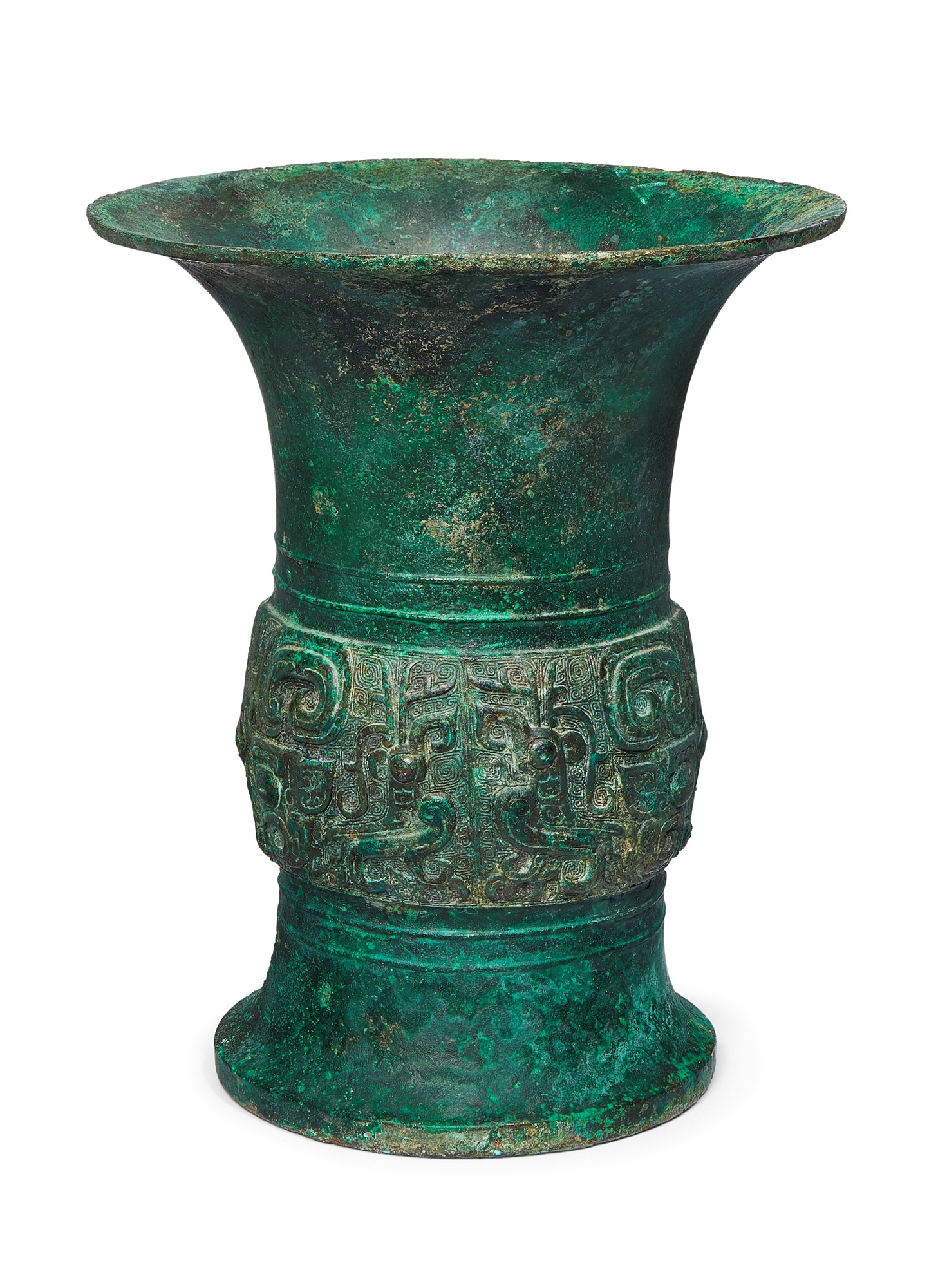 Leading the Chinese, Japanese & South East Asian Art sale were two rare archaic bronzes from the extensive van Daalen Collection, that made a joint sum of £102,500. Lot 51 a rare Chinese archaic bronze ritual food vessel from the, Yu late Shang dynasty made £50,000 at auction. Yu archaic bronze food vessels were popular during the late Shang dynasty in the Yinxu Period, circa 13th - 11th centuries BC. They were used for making offering of grains and vegetables in ancestral rituals, often accompanied by the tripod ding vessel used for cooking meats. The striking combination of diamond cartouches and boss decoration, as seen on the lot sold at Roseberys, appear to have been particularly admired and used on various shaped vessels in Shaanxi province during the Yinxu or Anyang period. Following on from this highlight came lot 52, a rare Chinese archaic ritual bronze wine vessel from the early Western Zhou dynasty with a Zun Fu Yi mark, which made an even greater figure of £52,500. Distinctive for its wide mouth to facilitate the pouring of wine, the vessel that sold at Roseberys belongs to a very small group of bronzes which are decorated with two repeating ‘bowstring’ bands around its body. The body is exceptionally well-cast with a striking design of two taotie masks and is covered in an appealing malachite-green patina. A similar vessel can be found in the Shaanxi Provincial Museum. 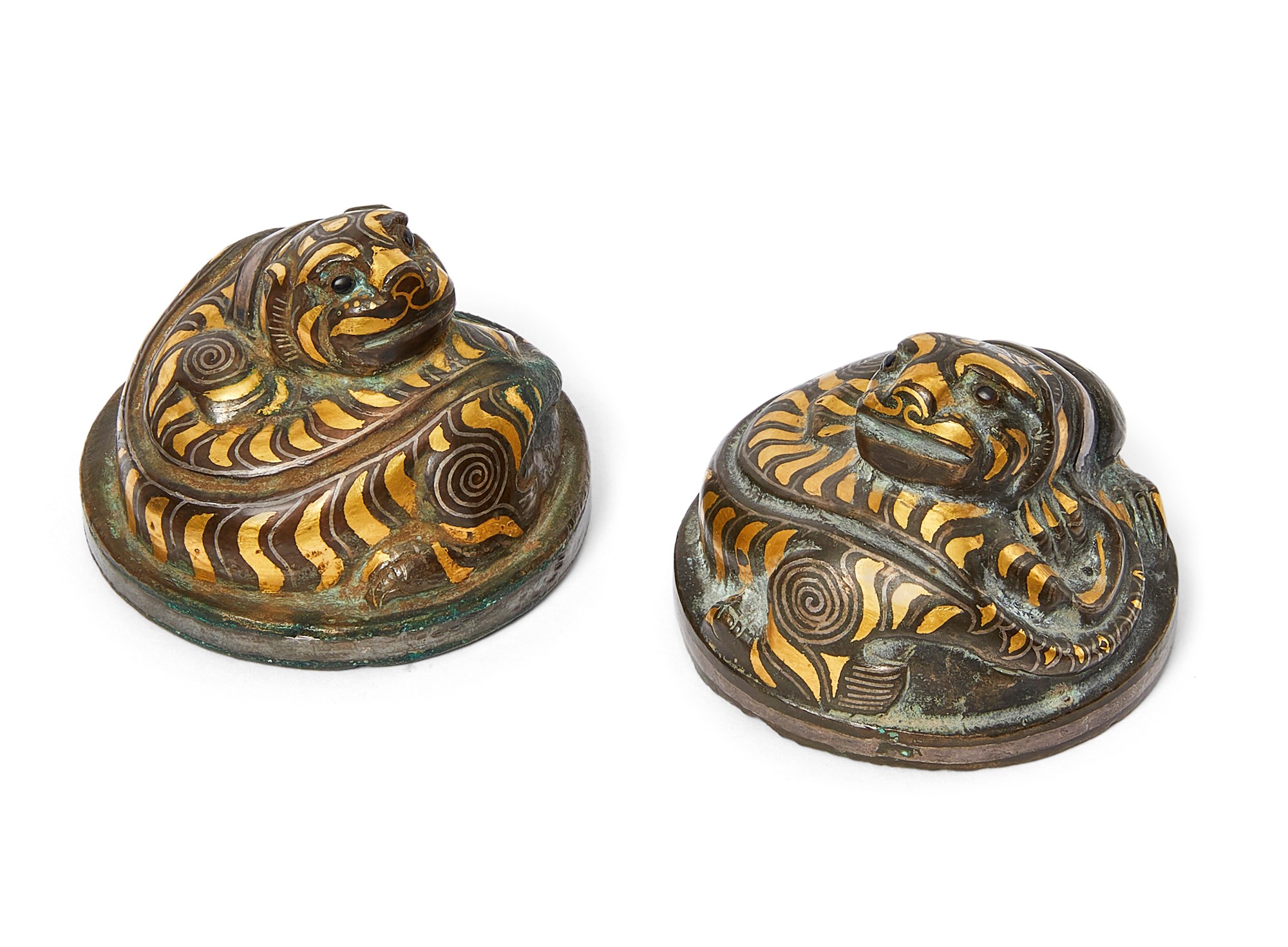 Estimated to make £8,000 - £12,000, a rare pair of Chinese bronze and inlaid 'tiger' mat weights hailing from the Western Han dynasty made over double their top estimate and sold for £32,500. A comparable set of four weights in the form of fighting animals is housed in the Met Museum, New York, on loan from Nanjing Museum. Whilst the original purpose of these is not entirely clear, scholars surmise that they were used in sets of four to hold down woven mats used for seating or to weigh down a funeral shroud. Typical of Warring States period and Han dynasty these weights were, as with the present pair, often sumptuously inlaid with gold and silver to convey the high social status of the owner.

A pair of Chinese porcelain 'bitter melon' bowls, Jiaqing mark and of the period

Entered into the auction at £8,000 - £12,000 was a pair of Chinese porcelain 'bitter melon' bowls from the Jiaqing mark and of the period (lot 233).  The delicately potted bowls, painted in famille rose enamels with pink and yellow butterflies hovering above fruiting and flowering bitter melon vines and bamboo went on to make £32,500. 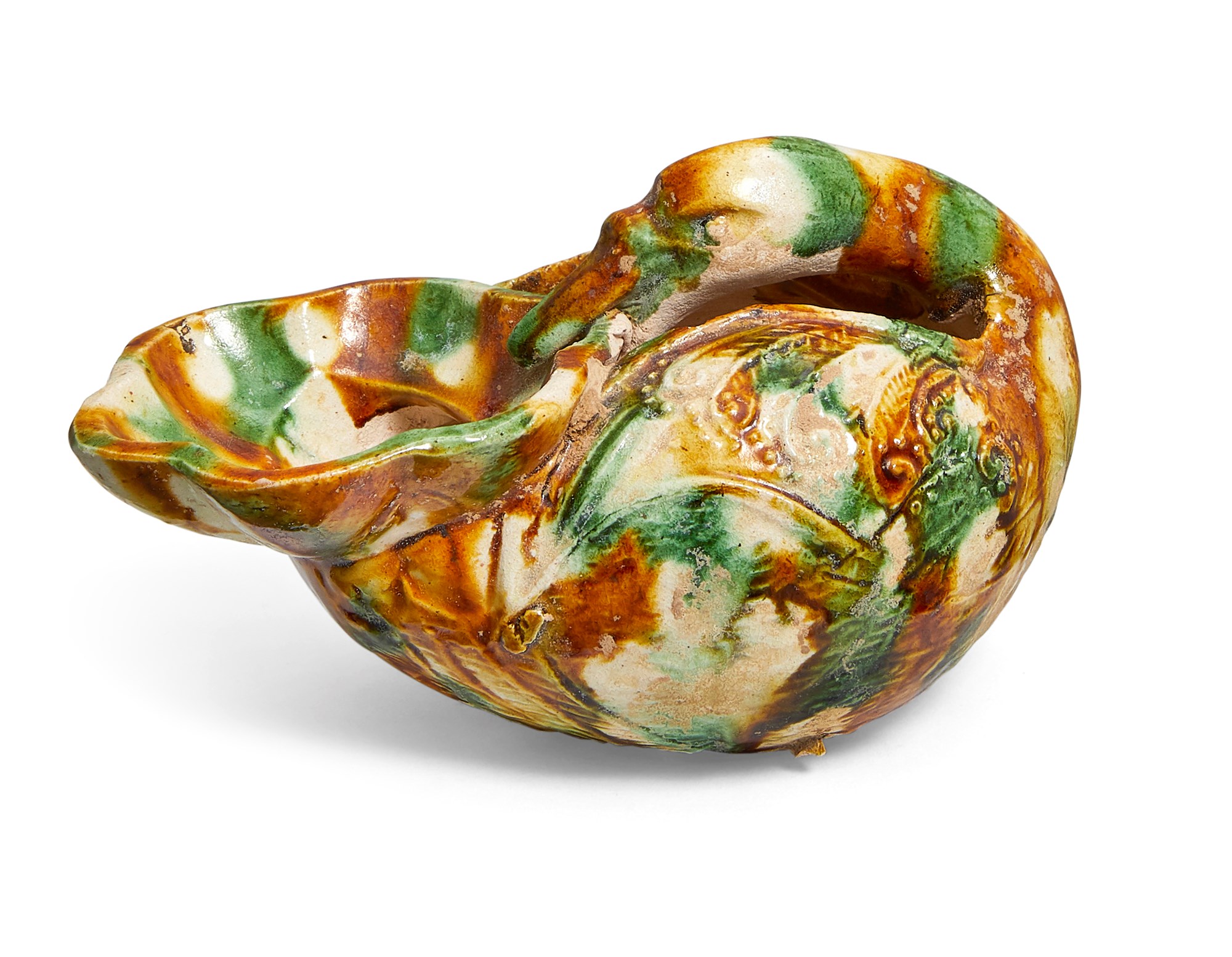 A Chinese sancai-glazed rhyton shaped as a goose, Tang dynasty

The strongest theme of outstanding results came from a group of Tang dynasty sancai-glazed pottery items, especially the rhytons that sold all high above their initial estimated price. Thought to have been inspired by Sassanian metalware prototypes, the exact purpose of these zoomorphic vessels is unclear, though it is suggested that they may have been used as lamps. Lot 30, a Chinese sancai-glazed rhyton shaped as a goose, made £25,000 at auction. The vessel which is potted as a recumbent goose with its neck arched back over its body, clutching a flower-form rim in its beak was initially estimated to make £2,000 - £3,000.  Similarly, lot 29 a Chinese sancai-glazed pottery rhyton modelled as a phoenix, also went on to out beat its original estimate of £1,500 - £2,000. Equally decorated in splashes and streaks of amber, cream, and green glazes to the interior and exterior, this rhyton made £20,000 at auction. Elsewhere another sancai-glazed item from the Tang dynasty that garnered bidding interest was a Chinese ovoid jarlet and cover (lot 28) that made £17,500. 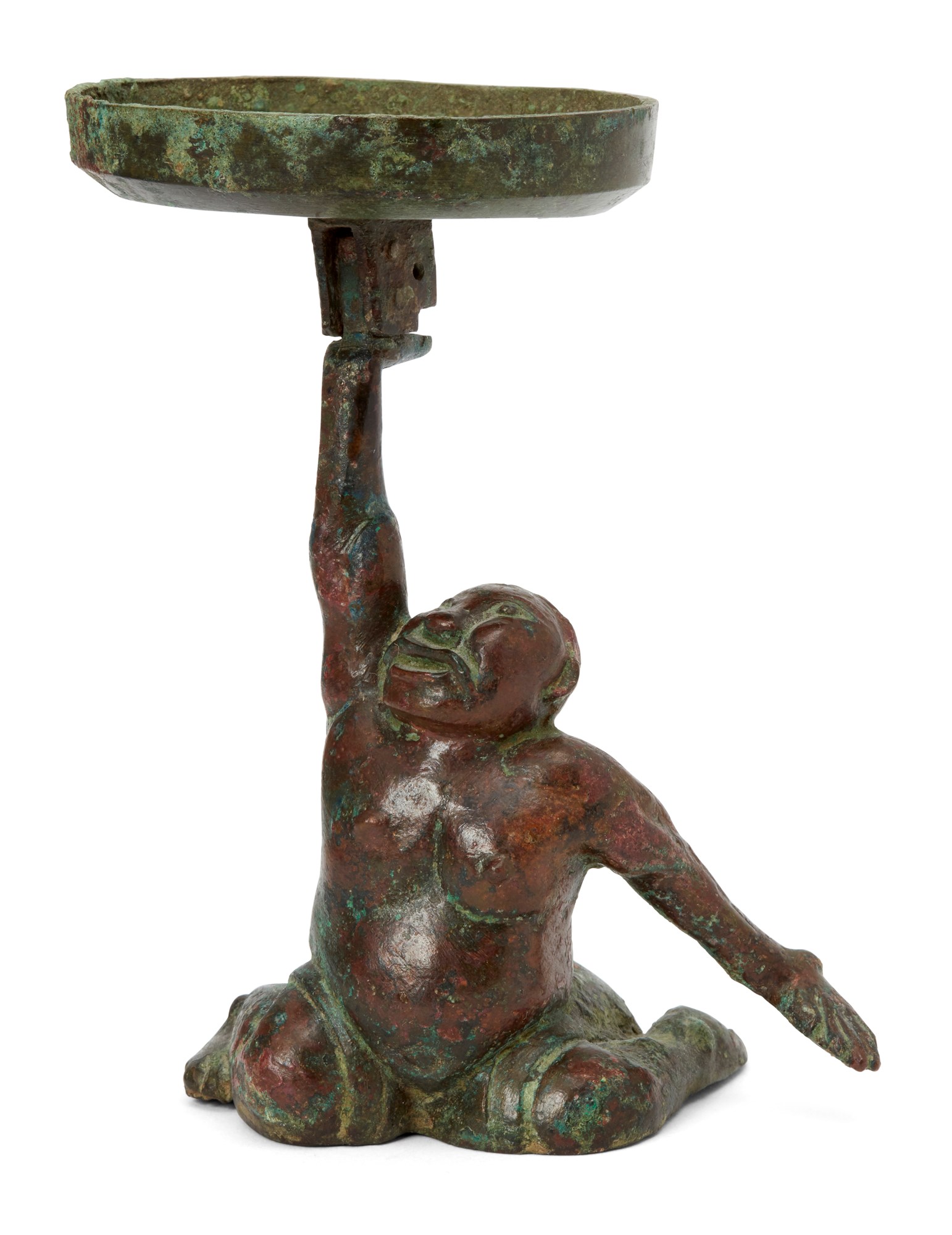 This entertaining Chinese bronze figural candleholder, made during the Western Han dynasty was estimated to make £2,000 - £3,000 at auction. The kneeling 'entertainer' holding a disc in his right hand for a candle went on to make a more outstanding price of £23,750. 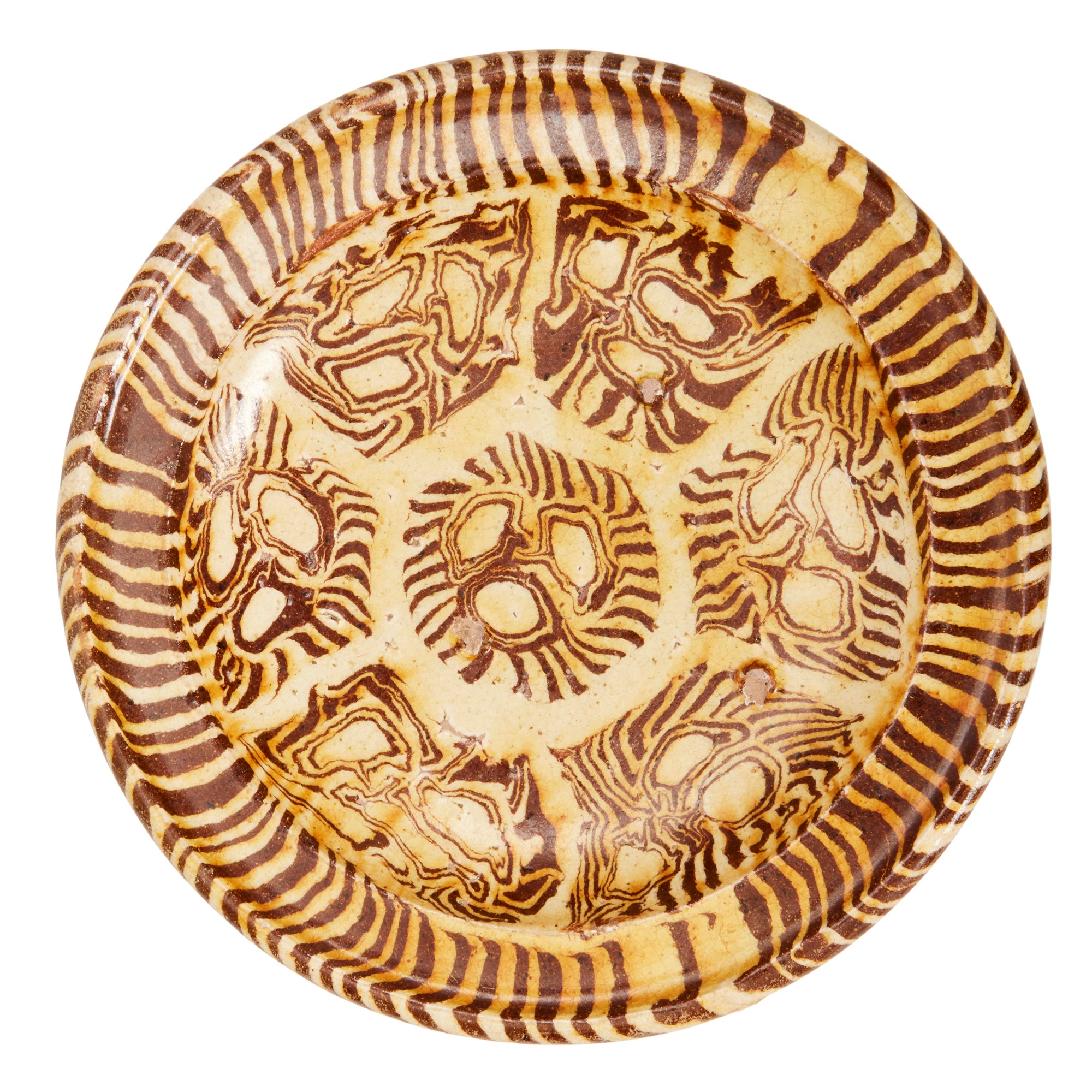 Lot 25, a rare Chinese yellow-glazed marbled pottery tripod dish beat its top estimate of £8,000, eventually being bid up to the sum of £18,750. Made during the Tang dynasty, marbling was a popular decoration technique at the time. Although formerly thought to be derived from the tixi multi-colored lacquer tradition, recent scholarship finds the inspiration to have more likely come from marbleized glassware’s of the ancient Near East. Such pieces have been found in excavations as far as Afghanistan and Korea. Evidentially Tang potters of the early 8th century adapted this technique to their pottery like the dish sold at Roseberys, creating the world's earliest form of marbleized ceramics.

From the modern and contemporary section, all ink and colour on paper paintings by Singaporean artist, Cheong Soo Pieng sold well, making a collective sum of £40,000. The highlight out of the three being lot 557 which achieved a price of £15,000. The painting of an abstract fishing village was purchased directly from the artist by the parents of the vendor. Artist Cheong Soo Pieng (1917-1983), was a pioneer of the ‘Nanyang’ art style and a driving force to the development of Modernism in visual art in early 20th-century Singapore.

The next Chinese, Japanese & South East Asian auction to take place will be on Wednesday 19 May.

Please contact asian@roseberys.co.uk if you need any further information.