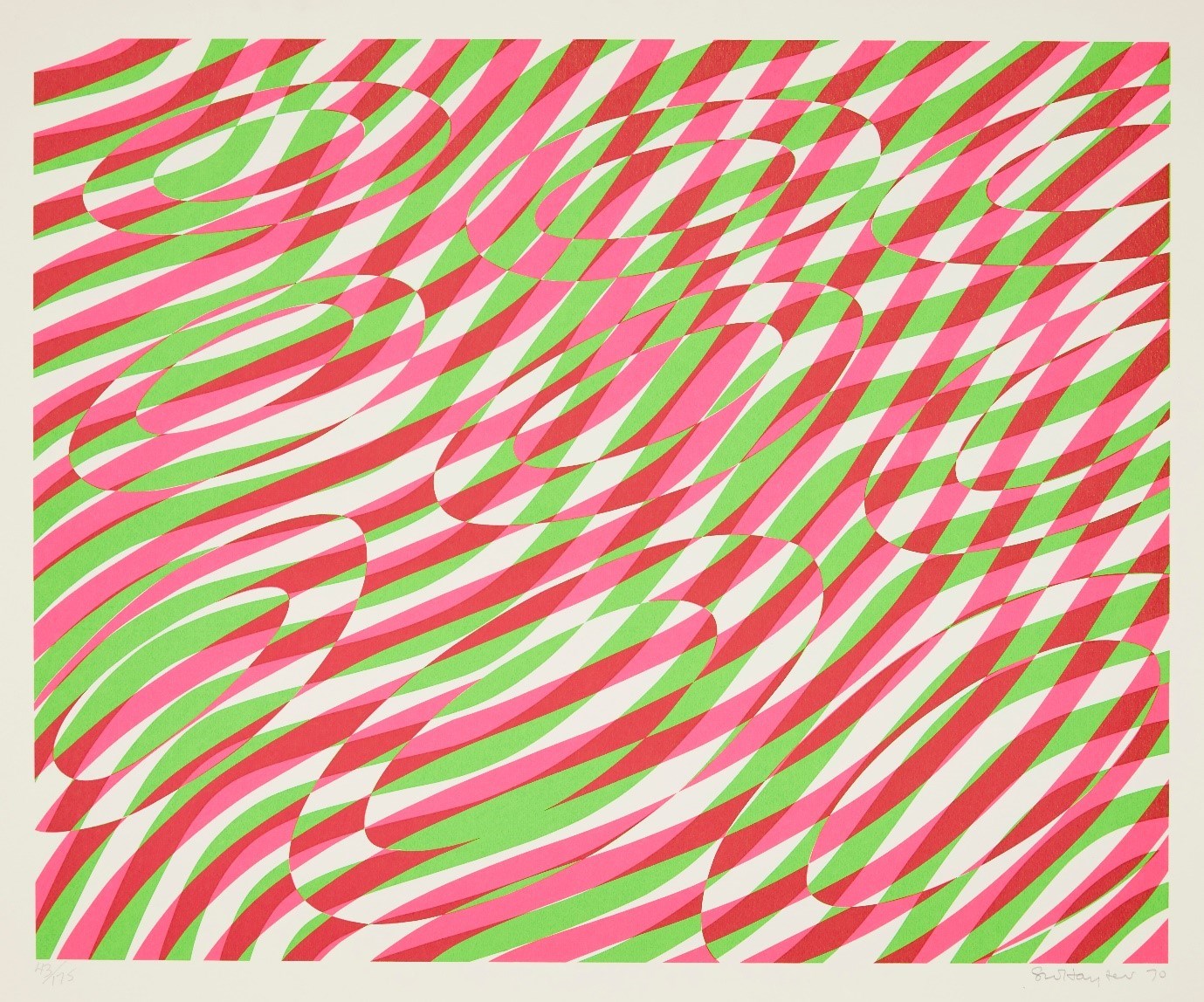 Stanley William Hayter CBE is widely regarded as one of the most significant printmakers of the 20th century. Known for his surreal and abstract expressionism, Hayter pioneered new forms of intaglio printing, never settling on a particular technique throughout his lifetime. Though he is celebrated by print makers and historians, he has often been neglected in British art history, here we introduce and explore the artist’s history as a legendary print-maker. 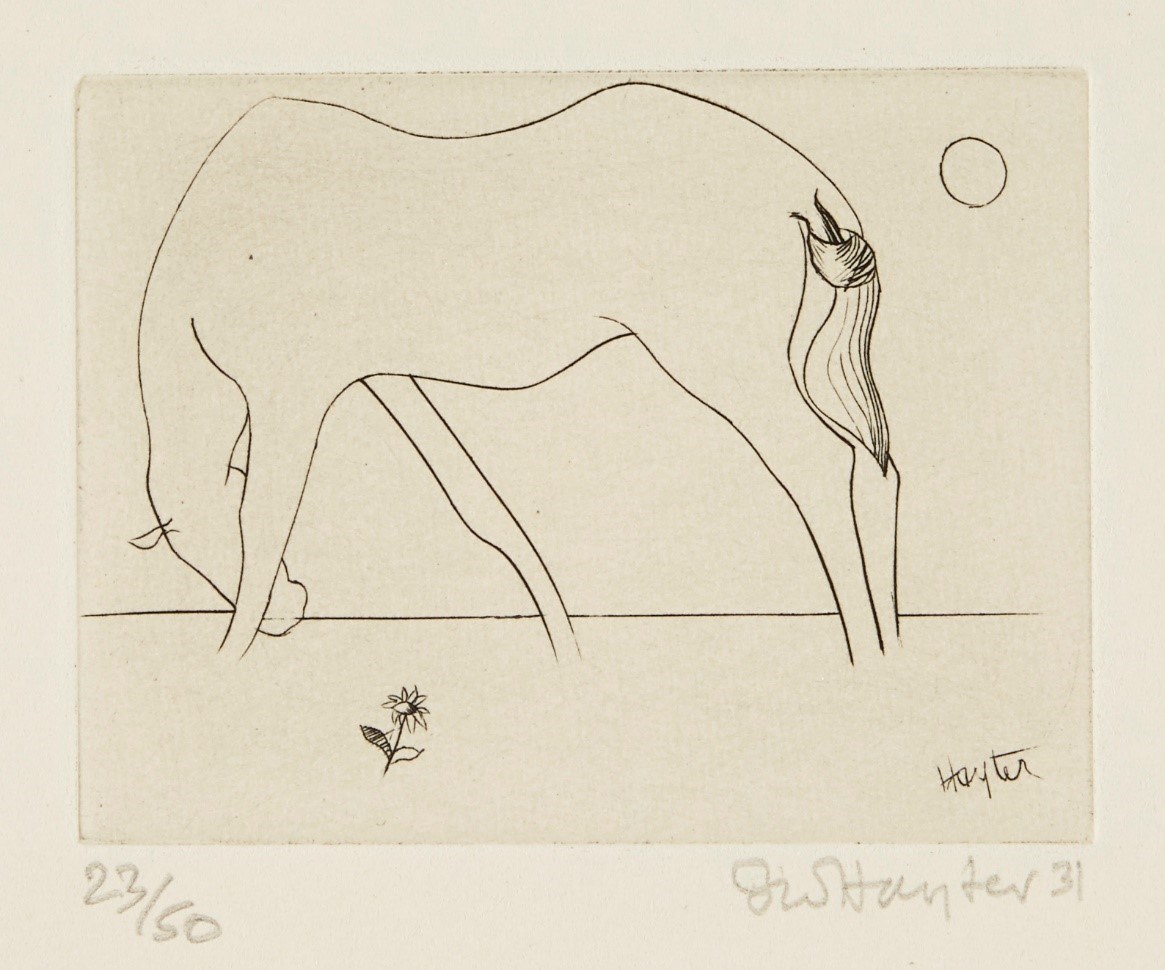 Hayter, born in 1901, was the son of a British painter, and it seems as though creativity ran in the family. Though he studied Chemistry at King’s College, London, by 1926 he had moved to Paris to study at the Academie Julian. In his first year Hayter was introduced to copper engraving, and went on to acquire his own printing press and opened a printmaking studio, Atelier 17, in 1927.

Hayter was driven in his improvement and exploration of the intaglio print-making methods; engraving, etching, aquatint and soft ground. He was a scholar of the craft, and saw collaboration as a means to both develop his own skills and spread the gospel of printmaking.

Hayter’s charismatic personality and drive to develop printmaking, attracted students, collaborators and independent artist alike. Atelier 17 became a hub for mentorship where young artists could work alongside experienced printmakers such as Pablo Picasso, Jankel Adler and Massimo Campigli. In the early 1930s Hayter collaborated on editions with some of the world’s most famed artist including Joan Miró and Kandisnky. 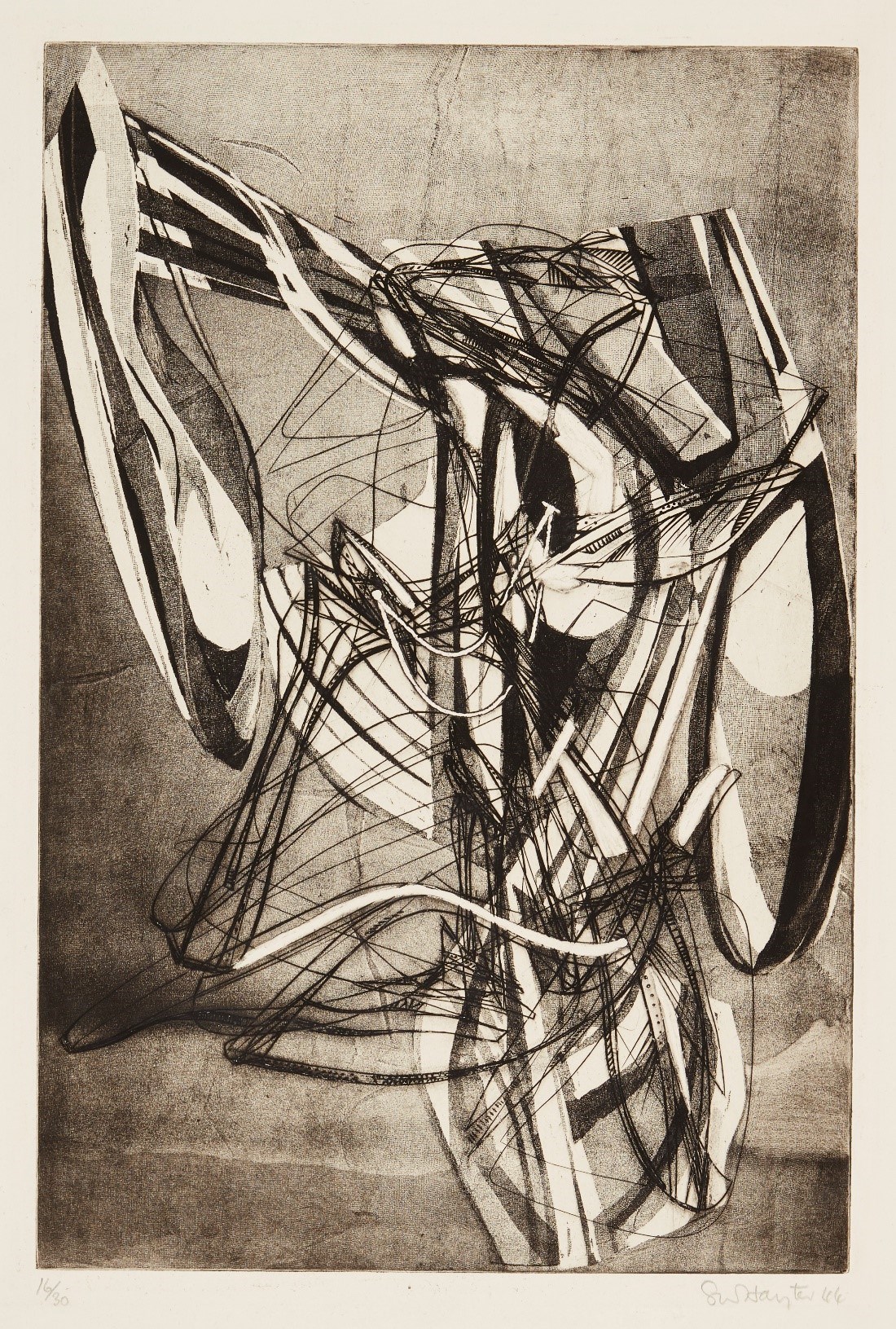 In an observation of his early work we can see a transition into surrealism through his study of form and structure. Hayter opposed the use of preparatory drawings reflecting his sense of improvisation and fluidity. His expressive lines were an ideal base with which to experiment with technique. Hayter often opted to use neglected materials or techniques, as these had more potential for innovation. He favoured soft-ground over aquatint, and experiment with textures using lace, wood and bark to lift the ground from the plate. These experimentations helped to develop the reputation of Atelier 17, with many of Hayter’s original experimental techniques, such as those with soft-ground, going on to be widely adopted and taught in art schools across the globe. 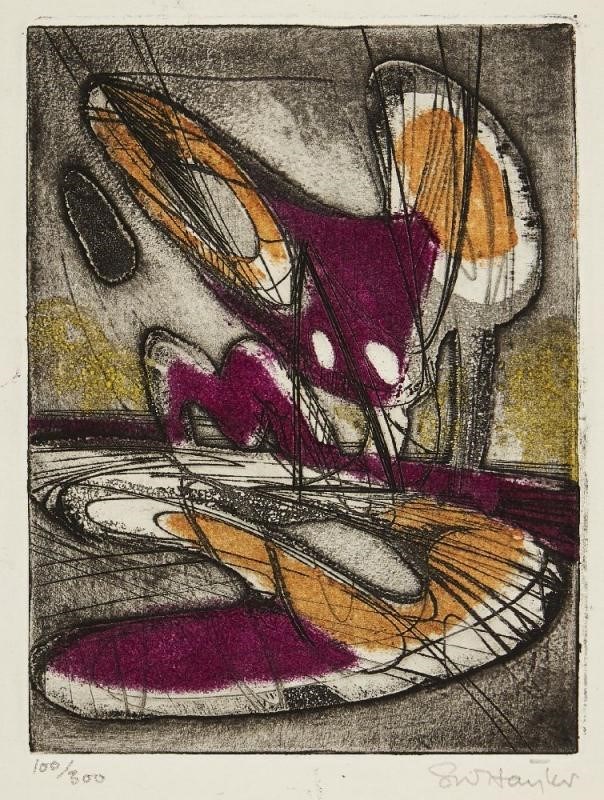 At the outbreak of World War II Hayter moved Atelier 17 from Paris to New York. Word of his gestural style and innovative practice had spread to the US and many young artists were drawn to the studio hoping to meet the founder. Emphasising the importance of process he began working with artists such as Rothko and Pollock, spending months and years assisting artists with the development of very technical skills. 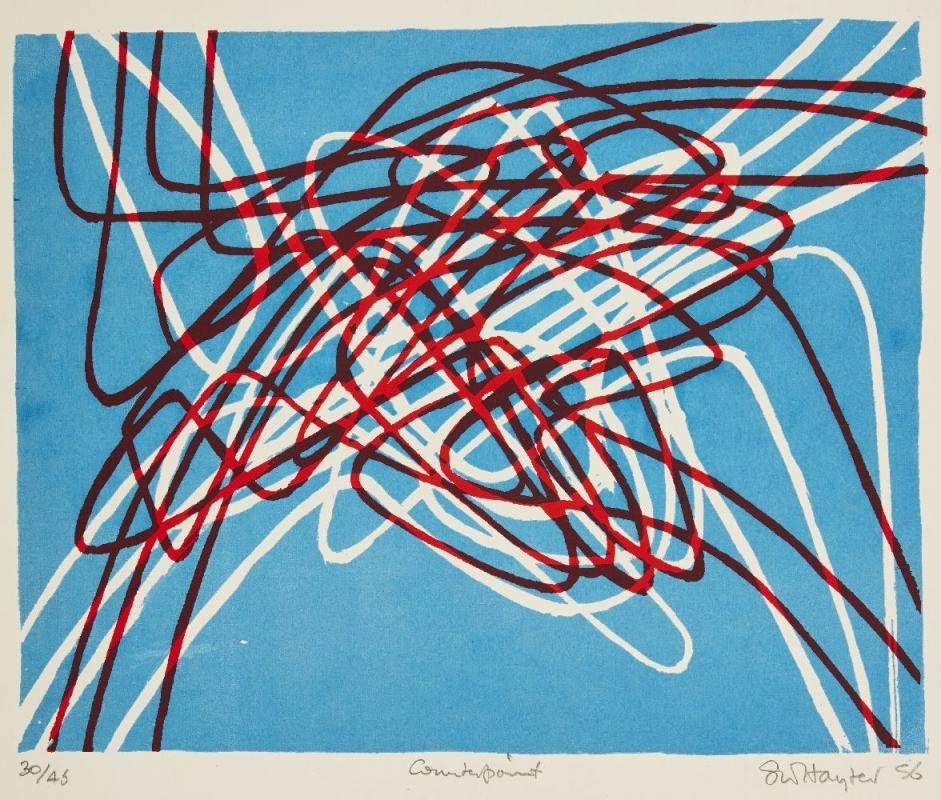 Hayter’s early scientific studies aided his mastery of technical printmaking. Using a scientific knowledge of oils, acids, abrasives, metals and solvents Hayter used the plate as a base for precise experimentation. During his time in New York Hayter developed his ‘Simultaneous Colour Printing’ technique, where he used different ink viscosities to create layers of colour, applying the ink with rags, stencils or rolling to alter the depth and opacity. 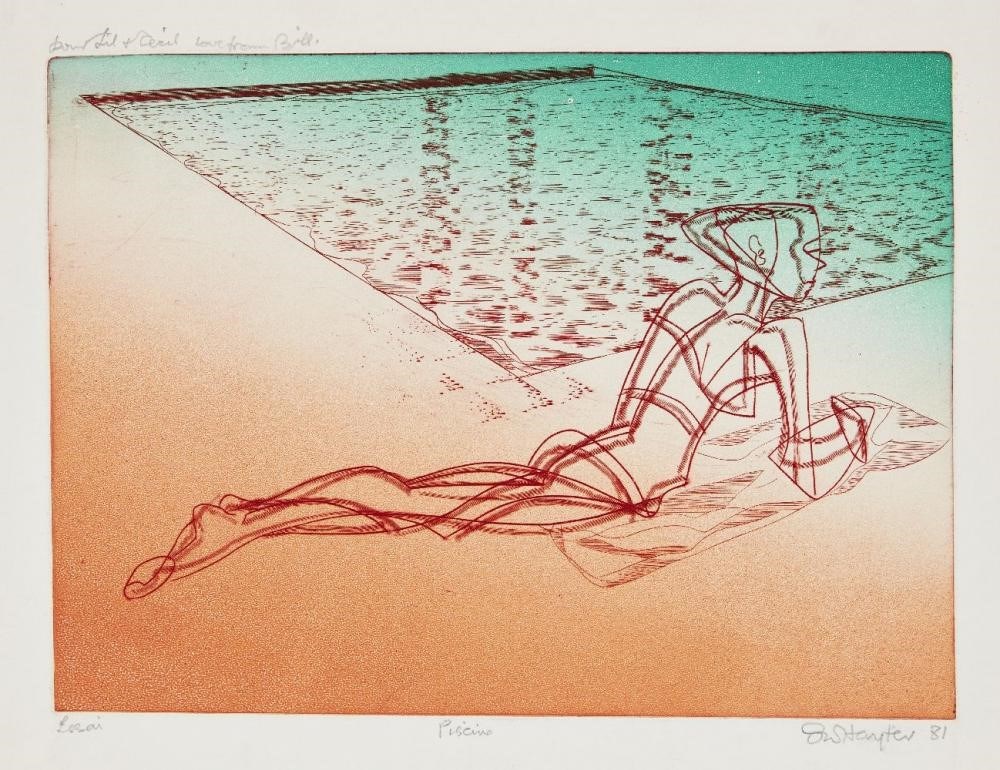 In 1950 Hayter once again returned to Paris, taking Atelier 17 back to its European origin. He was a prolific artist and continued to work until his death in 1988, producing around 460 prints. His innovative work made him a key figure in the education of print makers. Hayter never seemed to have his fill of experimentation and each technique he took on was explored rigorously until he felt he could move to the next. His abstract expressionism certainly paved the way artistically for many artists to come, however his contributions to the world of print making, including the many works produced directly at Atelier 17 have changed the face of print making and modern art as we know it.

CONSIGN A WORK OF ART BY HAYTER

LEARN MORE ABOUT THE PRINTS AND MULTIPLES DEPARTMENT