By 1600s there was an increased demand in secular subject matter in art, this included still life, landscapes and genre scenes. This was in part due to the Protestant Reformation; the church’s desire to reduce the visible and over the top tributes which demoted the word of God. Originally artists made a living from the church and wealthy catholic patrons commissioned them to paint religious depictions, needed to find business elsewhere. Still life became a popular subject matter across Europe; artist’s themselves taking inspiration from classical antiquity. The genre was invented by the artists and consequently in demand, they would choose the subject matter and arrangement and then it was bought by clients. Still life had no ecclesiastical function, so was bought by a wide range of private individuals. Artists of the era then became increasingly skilled and better at creating a sense of illusion, sections which were secondary to the human subject matter were completed with greater care.

Flowers do not only beautify the appearance, but also open secret meanings, and convey messages to the attentive researcher. Each species of flower displaying an indivudual meaning, usually around the connotations of death and life passing, referring to the idea of beauty never lasting. By depicting flowers in religious scenes, artists also showed everlasting beauty of wisdom and generosity of the Creator, and thus, they reminded us of the impermanece of earthly life. 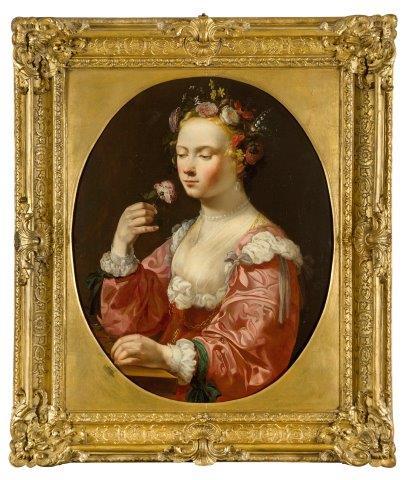 A prime example of flower symbolism is the image to the left. Follower of Cesare Dandini, Italian 1596-1657- An allegory of spring, portrait of a woman holding a rose, oil on canvas. These flowers show the joys of spring.

Patrons became increasingly interested in the natural world from 16th to 20th century. Exotic flowers started to arrive from Asia and the New World, and individuals wanted to record these mystical natural objects. This allowed floral still lifes to become appreciated as individual objects. Flowers began to be collected and traded, and new plants such as the tulip (imported to Europe from Turkey), were celebrated in still-life paintings, as seen in lot 24 ( pictured to below right) and 25. Tulips symbolise nobility and varied in value depending on colour. Stylistically, in both lots’ the flowers are placed centrally, and are perfect examples of the interest in exotic flowers. Evidently both are inspired by Dutch floral painter, Jan Davidsz de Heem, who was one of the leading floral artists. His new style created a sense of three dimensionality, whereby he built up his flowers gradually from dark backgrounds, adding clever lighting that created a sense of depth.

Display of skill as an artist 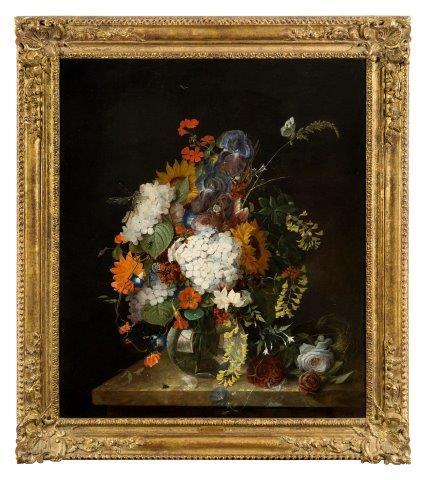 Lot 97 - William Burland, British fl.1787-1848-  Summer, 1834; oil on canvas, is a great example of use of skill of an artist of the period. Pictured to the left. Using techniques in art from the late 17th century; dark backgrounds, light highlighting the flowers, the table gives the sense that the object is coming out of the picture plane, however the reflection in the vase is the most interesting part of this work. It shows the reflection of a window overlooking a garden and another house. This creates another dimension, placing the viewer in that room.

Jean-Baptiste Robie, who painted the image to the right (Lot 154 - Belgian 1821-1910- Flowers in an ornamental urn; oil on panel)  was one of the pioneers in the evolution of still life painting during the mid-19th century. Renowned for his realistic depictions, faithful use of colour and attention to detail his finished compositions were much sought after and provided him with multiple awards and honours. Robie exhibited at the Brussels Salon from 1843 until 1875 and made his debut at the Paris Salon in 1863. He would go onto participate in the 1880 exhibition at the Palais des Beaux-Arts before exhibiting at the 1885 World Fair in Paris. He was knighted in 1861. This present work is thought to have been completed by Robie when he was 42 years old in 1863. The colour palette and composition is classically of his style, however the scale of the painting suggests that this could have been a finished sketch for a later and much larger work. Additionally, the label attached to the reverse written in the artist's hand confirms the authenticity of the present painting declaring the subject matter, size and date; Brussels 3rd April 1863. Further inscription confirms the work was gifted by the artist to a mayor or alderman of the name Heinbach. We are grateful to Kathleen de Fays for kindly confirming the authenticity of this work.

You can view a beautiful example of flower paintings in the 19th century by some of the most important artists to date via architecturaldigest.com here.

You can view all our past Old Master, 18th & 19th works of art here

You can view upcoming auctions here