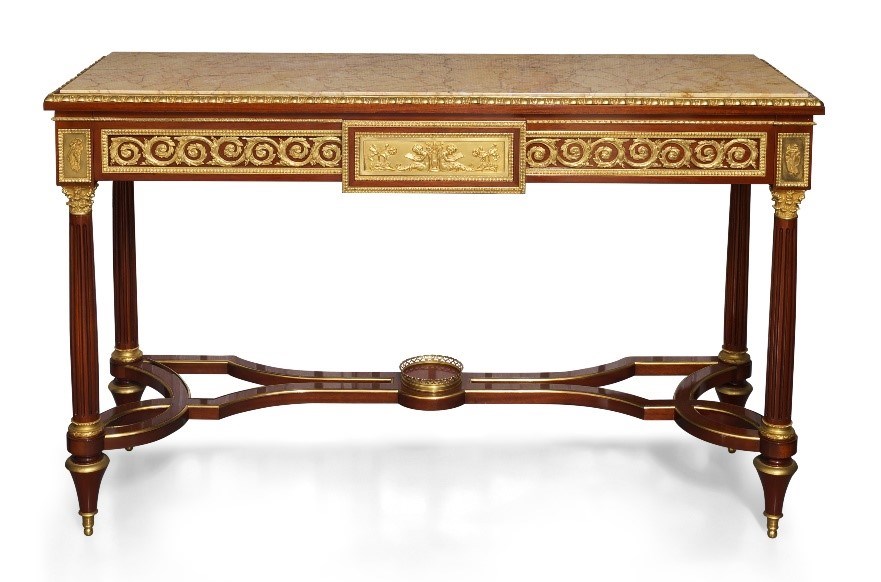 Roseberys are delighted to present the second Fine & Decorative auction of the year on Wednesday 21 July, starting at 10am, that encompasses 542 lots in total.

Anna Evans, the head of sale comments: ‘The summer Fine & Decorative sale at Roseberys includes a range of traditional and eclectic items to suit all tastes and budgets.  We are delighted to offer a group of silver from London’s famous Athenaeum club, alongside a private collection of interesting kunstkammer objects and a private collection of autographed photos of Rudolph Nureyev and Dame Margot Fonteyne.  The sale includes furniture and objects from the 15th century to 20th century and offers the opportunity to add an exciting talking point to any interior.’

A Southern German or Tyrolean polychrome wood model of a Saintly King, circa 1490, with gilt decoration

Leading the sale with an estimate of £5,000 - £8,000 is lot 245, a Southern German or Tyrolean polychrome wood model of a Saintly King, circa 1490, with gilt decoration, depicted with crown and orb, measuring 112cm high. The identity of this figure as a King is suggested by his attributes of a crown and the orb, formerly surmounted by a cross. While the loss of his second attribute – perhaps a sceptre – does not allow for a more precise identification, it is likely that a saintly King, such as St Oswald or St Henry II, is represented. Traditionally thought to have been made in the Tyrol, the figure can be compared to a Saint Nicholas dating to circa 1470 from St Georgen am Pinzgau. The model comes with a provenance with Wilhelm Henrich, Frankfurt am Main, 1957; private collection, Germany, acquired from the above; thence by descent to the present owners. 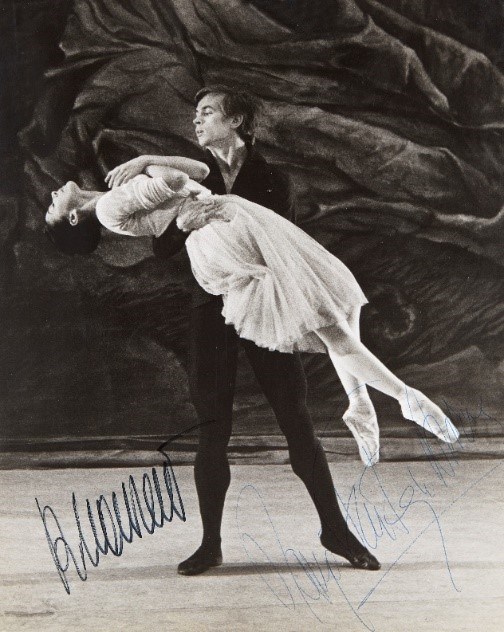 Following on from this highlight is lot 393, a large private collection of ballet photographs of Rudolph Nureyev and Dame Margot Fonteyne that has a pre-sale guide price of £3,000 - £5,000. These images were taken at live performances and rehearsals, comprising approximately forty autographed photographs, approximately 250 photographs in total presented in amateur photographic binders, three binders containing press photographs and typed transcribed newspaper clippings, a small number of further autographs of other ballet performers including Natalia Bessmertnova and Maya Plisetskaya.

Lots 343 and 344 in the sale are Madagascan funerary post finials. Lot 343 on offer is carved as a tall stylised bird, 73cm high. 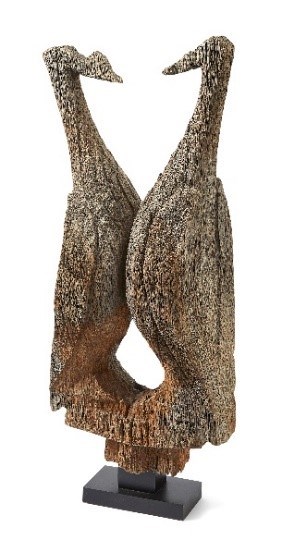 Lot 344 is carved as two birds with plump bodies and long beaks, 56cm high. Both finials are estimated at £3,000 - £5,000, and come with a provenance possibly purchased from Karavanserai Maastricht; the collection of the late Clodagh Waddington. Avian carved finials such as the lots on offer were made for funeral rites of chiefs and other high-status persons. Funerary sculpture is understood, not as a direct or literal portrait of the deceased but as a locus of connection with the ancestral realm. The bird represents the ascension of the soul to the next life. 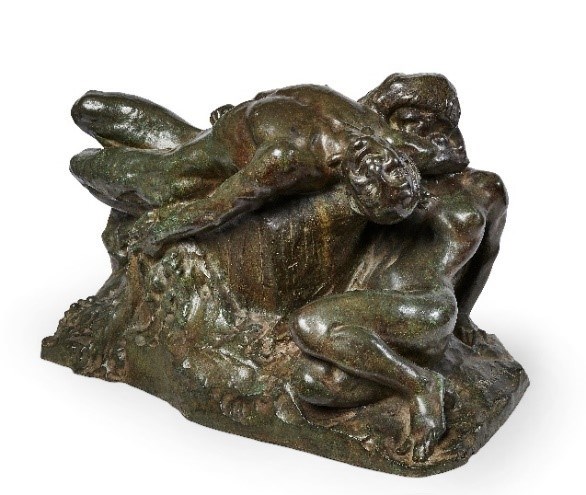 Entered onto the market with an estimate of £1,800 - £2,500 is lot 293. Giovanni Nicolini, Italian, 1872-1956, 'Ebbro' (Drunk), bronze, modelled as a nymph and satyr reclining on a rock, cast signature G.Nicolini and foundry plaque T LAGUNA / NAPOLI. The bronze measures 40cm high, 63cm wide, 34cm deep. Born and raised in Palermo, Nicolini studied under Vincenzo Ragusa at the Museo Artistico Industriale. He later moved to Rome to work for Giulio Monteverde, where he won the National prize with his relief of Le Marie al Sepolcro and the sculptures La Meditazione and Il Risveglio. His oeuvre ranges from literary to historical and mythological subjects. He is mostly known for his sculptures in Rome, such as La Calabria (1907) and Trionfo Politico (1911). In London, his work Credi a me is kept at the Tate Gallery. Nicolini exhibited a work titled 'Satiro e Ninfa' in San Francisco in 1915, which may refer to the present lot (op. cit. p. 652). 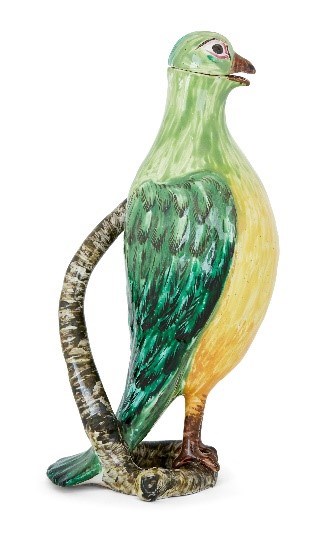 
Lot 222, a continental fayence parrot jug and cover, c.1770, probably Proskau or Glienitz comes with a pre-sale guided price of £1,500-£2,000. Measuring 34.2cm high, the jug is modelled standing on a branch forming a handle, the body painted in green, yellow and ochre, the cover in green with burgundy eyelids and black pupils and brows, the underside roughly finished. These parrot jugs and covers have in the past been attributed to both Glienitz and Proskau and given the geographical proximity of the manufactories it may be that they were both producing very similar pieces. This jug comes with a provenance from the Decorative Arts Collection of the Late J.O. Fairfax AC, Leonard Joel Pty Ltd, Sydney, 31 August 2017, and has a STODEL COLLECTION label to underside. 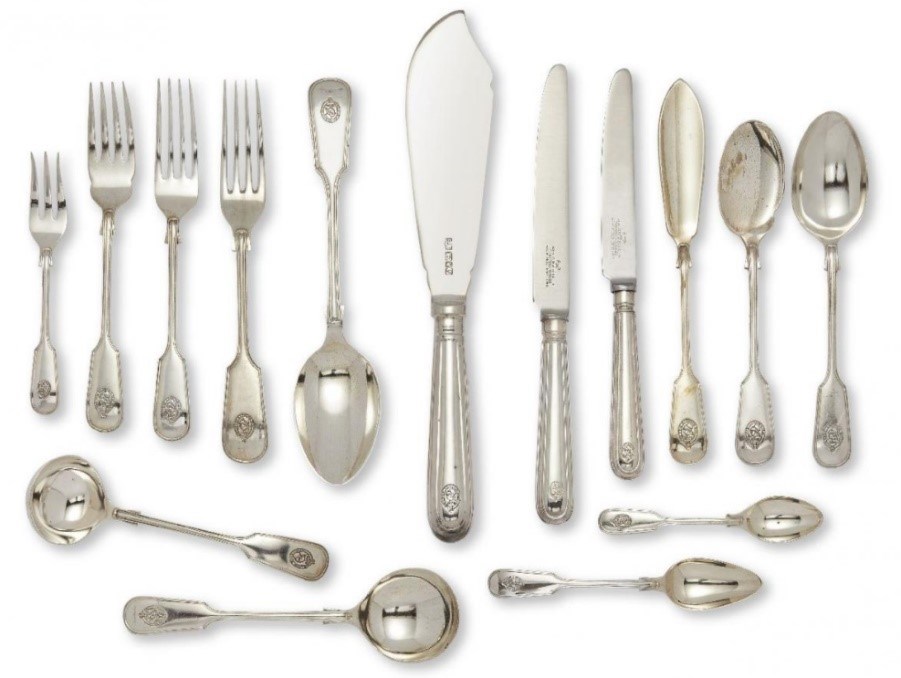 Lots 189 to 207 within the sale is a group of silver consigned from The Athenaeum. The Athenæum is a private Members' Club in London established in 1824 to serve as a place for eminent artists, writers, scientists and other great thinkers to enjoy the companionship of civilised minds. It now includes persons of attainment in any field whose work is intellectual and of substantial value. The distinctive neoclassical Pall Mall Clubhouse was designed by the young architect and Member Decimus Burton. The Club was founded by John Wilson Croker and its first Secretary was the great scientist Michael Faraday. Members over the years have included Charles Darwin, Charles Dickens, Arthur Conan Doyle, Sir Thomas Lawrence, Edwin Landseer, William Holman Hunt, William Wilberforce, John Nash, Sir Alec Guinness, Yehudi Menuhin and numerous Nobel Laureates. The silver within the Athenaeum collection on offer in Roseberys Fine & Decorative auction ranges in estimates from £80 up to £8,000. A highlight within the collection is lot 207, an extensive part-canteen of silver fiddle and thread pattern cutlery, Roberts & Belk, Sheffield, 1995, coming with an estimate of £5,000 - £8,000. 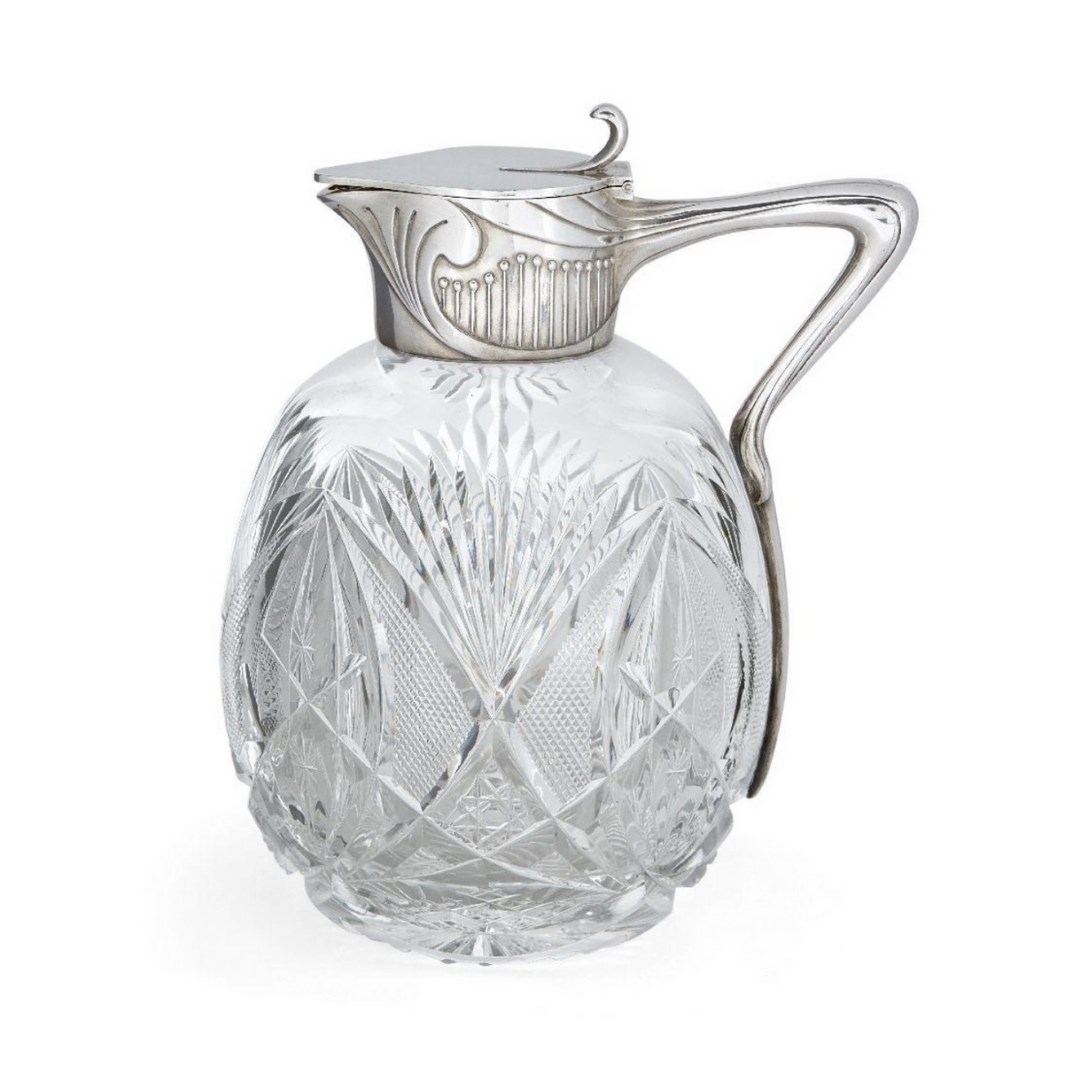 
Another highlight silver lot on offer within the sale is lot 171. A Russian silver mounted cut glass decanter, Grachev Brothers, St Petersburg, assay master Yakov Lyapunov (1899-1903). Measuring 18.5cm high, the decanter is designed with a flattened oviform cut glass body to a silver collar chased with Art-Nouveau motifs, the stylised foliate handle to hinged lid with gilded underside surmounted by a curved thumbpiece. Russian silver is highly collectible and its popularity is ever on the rise, with avid aficionados around the world. This lot comes with an estimate of £1,200-1,800. 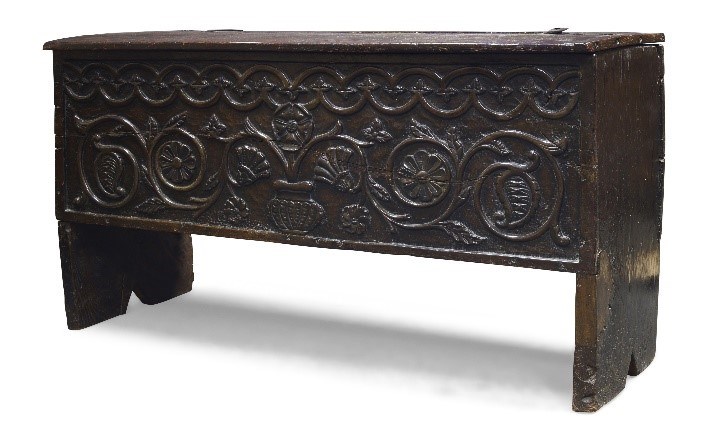 The highlight within the furniture section in the sale is lot 407, an English carved oak coffer, early 17th century. With a hinged lid enclosing storage space, the frieze with carved scrolling foliate decoration and rosettes, on v-cut end supports, featuring an unusual carving. This coffer comes with an estimate of £400- £600. Another striking piece of furniture on offer is lot 488, a Louis XVI style mahogany and ormolu mounted console table, second half 20th century, coming with an estimate of £3,000 -£4,000. 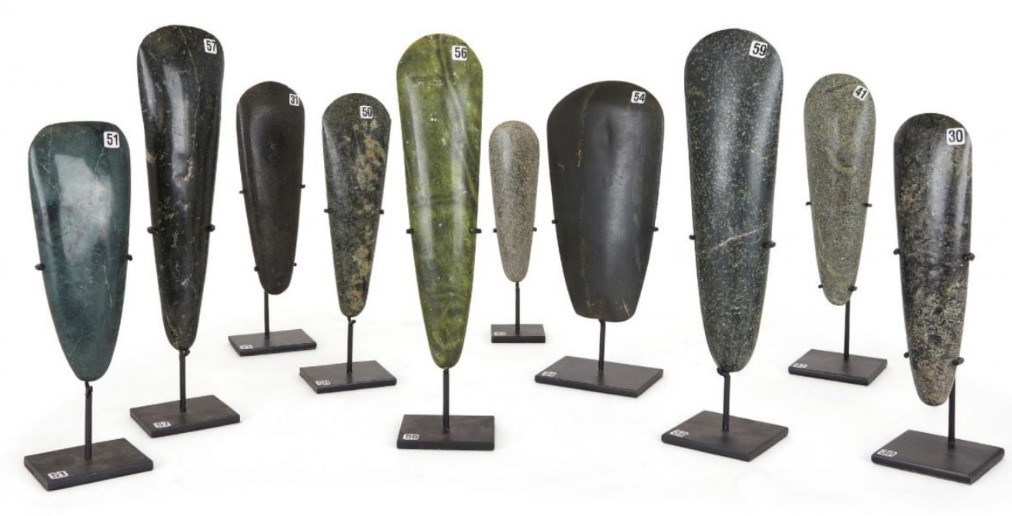 Lots 349 – 387 in the sale come from a Property of a Gentleman, and are a group of Kunstkammer objects ranging from momento mori to Papua New Guinea obligation blades. Lot 349, the highlight out of the collection is ten green-stone obligation blades, Lake Sentani, Papua New Guinea, late 19th/early 20th century, measuring 17cm - 28cm high. In Papua New Guiena there was an organised system of ceremonial exchange within a certain specified area. Individuals or communities would give prized objects to a partner in the same or a different village. They would not immediately receive a gift in return but at a future date would receive something of at least equal value. The ceremonial giving or kula would take many months of preparation and was perceived as the centre of economic, social and ceremonial life; it not only provided prestige by the accumulation of prized objects, such as these obligation stones, but most importantly created a network of obligations which contributed to social stability. This collection of ten green-stone obligation blades has been priced at £800- £1,200.

Another formidable section within the sale, lots 509 – 542, that comes from a Property of a Gentleman, is a collection of wine, formed in London. The highlight out of the group is lot 542, Baron Philippe de Rothschild la Bergerie Mouton Cadet 1962, Pauillac, single bottle, together with a mixed group of French red wines, including Cote Baleau Saint Emilion 1970, Chateau La Couronne 1970, Chateau D'Angludet 1981, Clos L'Eglise Pomerol 1969, Chateau Corbin-Michotte 1962, Chateau Larose-Trintaudon 1971, Chateau Chante-Alouette, Chateau Crinite-Valrose 1977, and a single bottle of Chateau Eyquem. A perfect collection to toast toward the end of lockdown!

Viewing by appointment only contact worksofart@roseberys.co.uk to book a time slot