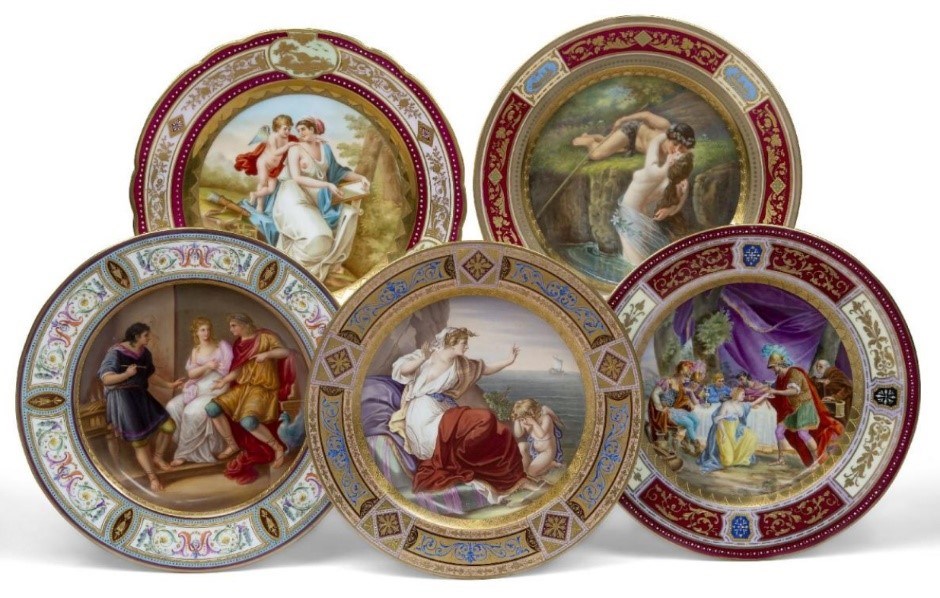 On Thursday 18th November, Roseberys are thrilled to present the Fine & Decorative auction, which includes The Geoffrey and Fay Elliott Collection, The Property of a Gentleman from a Covent Garden apartment and The Gordon Watson Collection. Following on from this day sale incorporating several private collections, is the second part of the Fine & Decorative auction which will take place on Friday 19th November. This auction includes an impressive collection of Viennese cabinet plates, lots 612-640 and a collection of Viennese cold-painted bronzes, lots 695-702. Both auctions will start from 10am.

Head of the Fine & Decorative department Anna Evans, commented: ‘The Roseberys Fine & Decorative sale this November is a two-day auction including almost 900 lots.  Day one includes three collections – The Geoffrey and Fay Elliot collection, The Property of a Gentleman from a Covent Garden Apartment and the Gordon Watson collection.  Across these three diverse groups are opportunities to buy Modern British pictures, ethnographic sculpture and an enormous range of works of art and furniture including a wonderful Japanese bronze jardiniere in the form of elephants and beautiful sculpture by Celine Lepage and Mauro Corda among others. Day Two continues the diverse theme with 162 lots of silver, including a Paul Storr claret decanter label, a large private collection of Vienna cabinet plates, a group of Viennese cold-painted bronzes and a group of ethnographic sculpture and works of art.’

Highlights from the day one auction

The Geoffrey and Fay Elliott collection 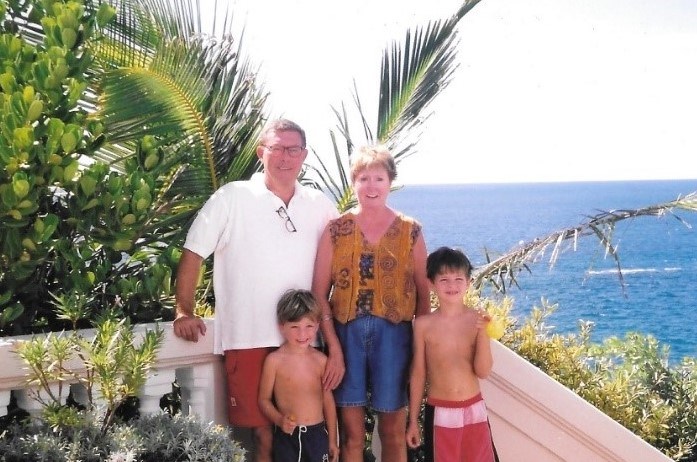 Geoffrey and Fay with grandchildren Thomas and Jamie, 2000

Lot 1-52 are from the Geoffrey and Fay Elliott collection. Throughout careers that took them to London, New York and their adopted home of Bermuda, Geoffrey and Fay amassed an eclectic and diverse collection of art and antiques.  Geoffrey's early career followed his father's footsteps into the Secret Service before moving into banking. During his semi-retirement he enjoyed exploring and documenting the life of his elusive father who spent much of the war in a Nazi prison camp. This led Geoffrey to start writing about his family and he went on to publish I Spy: The Secret Life of a British Agent (1998) - about his father, Secret Classrooms: An Untold Story of the Cold War (2002) - about his own experience, and From Siberia with Love: A Story of Exile, Revolution and Cigarettes (2004) - about his grandparents. Collecting artefacts from their extensive travels became a lifelong passion for Geoffrey and Fay, one they enjoyed and shared together. Latterly, they donated some of this sizeable collection to The Bermuda National Archives, the Morgan Library in New York, Leeds University and the British Library. This collection at auction today reflects their passion and interests. 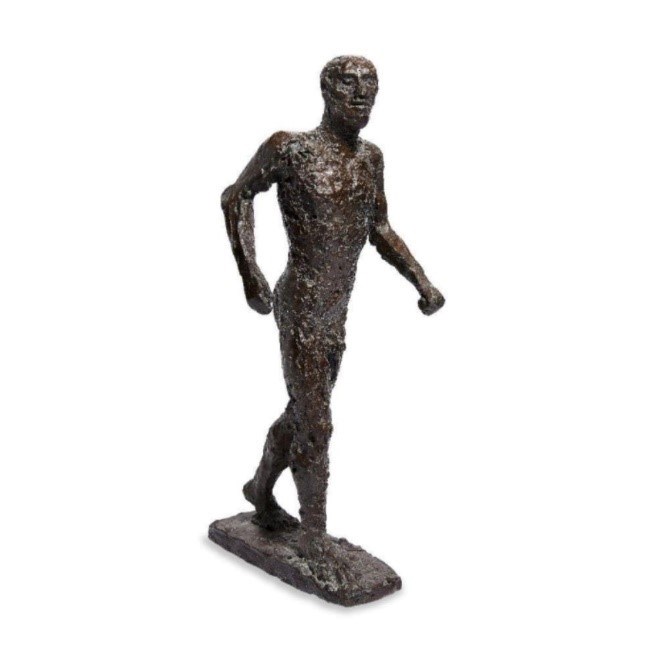 Leading the highlights from the Geoffrey and Fay Elliott collection is lot 13, a bronze titled ‘Walking Man’ by English sculptor and printmaker Dame Elisabeth Frink CH DBE RA, created in 1989. This bronze that comes with a provenance from Lumley Cazelet Ltd, London; private collection, purchased from the above in October 1998; thence by descent, has an estimate of £20,000 - £30,000. Frink’s Times obituary noted the three essential themes in her work as "the nature of Man; the 'horseness' of horses; and the divine in human form" – making this work a key work within the artist’s oeuvre. 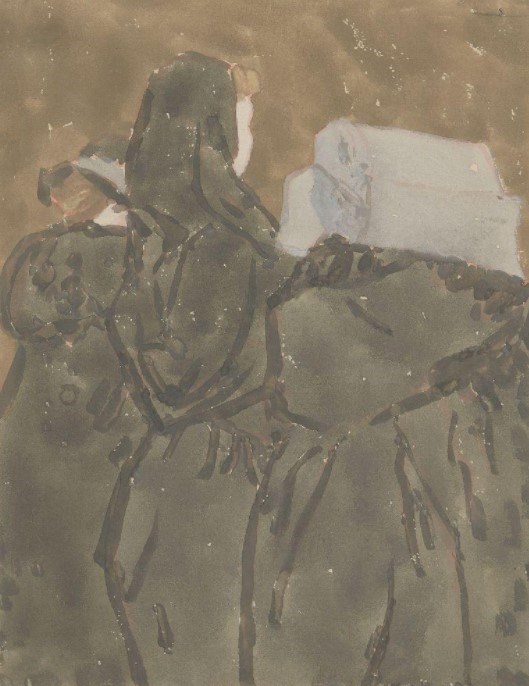 Lot 3, ‘Two Women and a Nun in a Church’, late 1910s-early 1920s; gouache and watercolour on paper by British artist Gwen John, has been entered into the auction with an estimate of £6,000- £8,000. One of the most unique and elusive voices in Modern British painting, Gwen John is renowned for her intimate interiors of women and children. The sister of Augustus John, Gwen moved to Paris in 1903, giving a distinctive European touch and palette to her work, reminiscent of Eduard Vuillard, which creates a quiet yet intense atmosphere. The artist made a number of works depicting church congregations, such as the lot on offer, usually depicting the figures from behind. These works have a fluency to their rapidly applied brushes of gouache. Her work is in all major UK public collections, including Tate, the Yale Centre for British Art and the Scottish National Gallery of Modern Art. Other works from this series of figures in church are found in the National Museum of Wales. 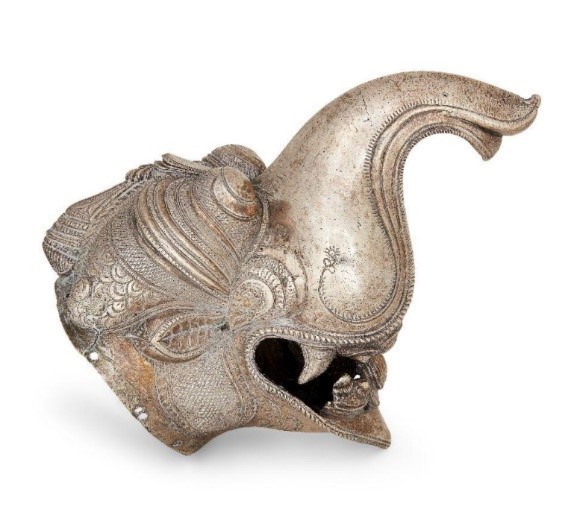 Lot 24 on offer is a large silver palanquin pole finial with Makara head, South India, circa 1800. Geoffrey and Fay Elliot purchased this large silver palanquin pole finial with Makara head from the Simon Ray Indian and Islamic Works of Art, in 2004. The makara is a mythical aquatic creature which combines the body of a crocodile with the head of a lion and trunk of an elephant. He is the vehivle of Varuna, God of the water’s heaven and earth and the emblem of Yama, the god of love. This lot comes with an estimated price of £2,500- £3,500 at auction.

The Property of a Gentleman from a Covent Garden Apartment 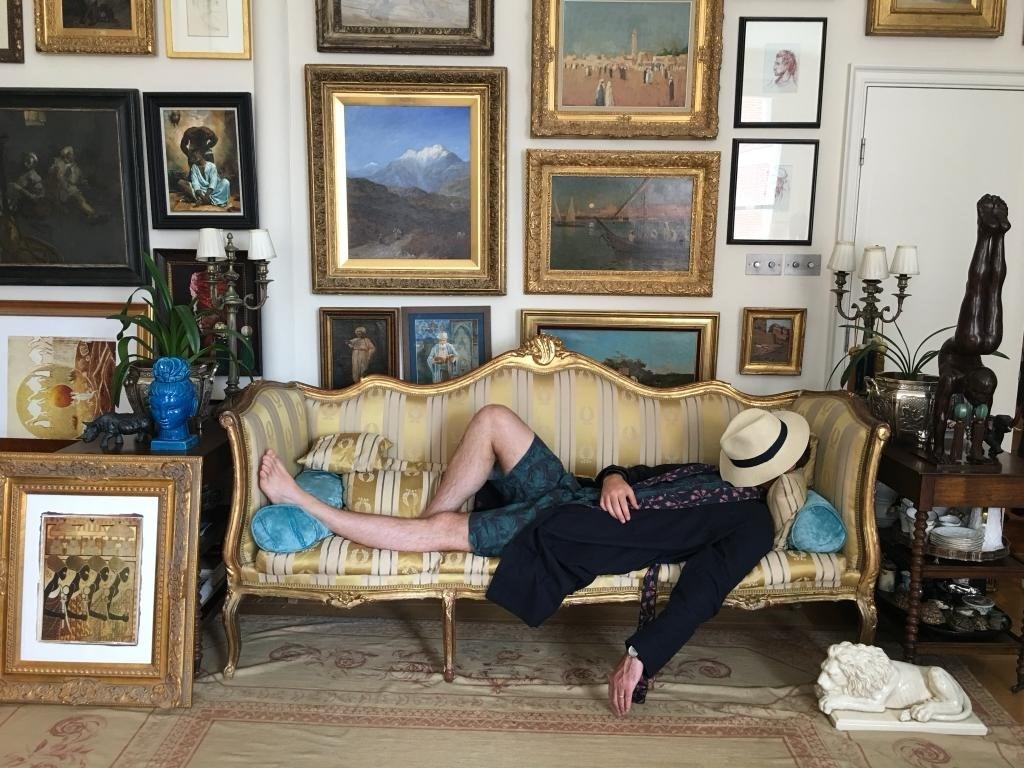 Lots 53- 398 within the sale are from the Property of a Gentleman from a Covent Garden Apartment. An iconic shopping, cultural and entertainment hub in London's West End, Covent Garden is known for its prestige and elegance, which can be mirrored within this collection on offer. An eclectic and inspiring group of pictures, sculpture, Asian and interior pieces are on offer, that have been meticulously curated by the Gentleman consigner over years. Highlights include lot 72, an Italian marble model of the Sleeping Christ Child, late 17th/early 18th century, lot 375, Henri Matisse’s Etude de jambes lithograph and lot 286, an oil on canvas Venetian canal scene by French artist Antoine Bouvard. 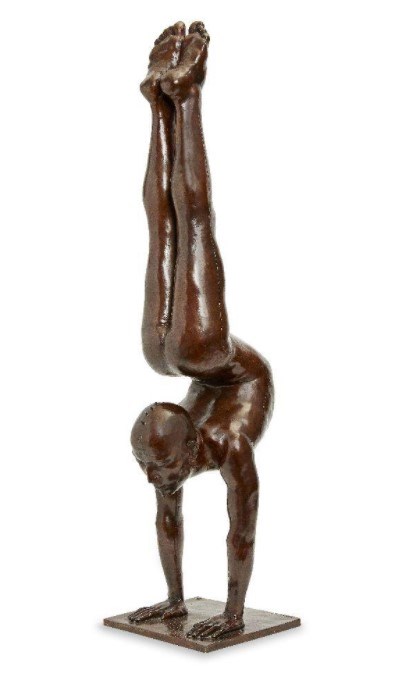 Mauro Corda, French, b.1960, a bronze model of an acrobat

Estimated to make £6,000- £10,000 is lot 204, a bronze model of an acrobat by French Sculptor Mauro Corda. The bronze which measures 84cm high comes with a cast signature CORDA, 1/8 and with foundry stamp. Corda is a French sculptor of Italian origin, who principally explores the human form in his works revealing the intensity and force of the physical while also acknowledging its flaws and vulnerabilities. In his series of contortionists, he pushes bodies into extreme positions and executes the sculptures with anatomical precision and fascinating movement. 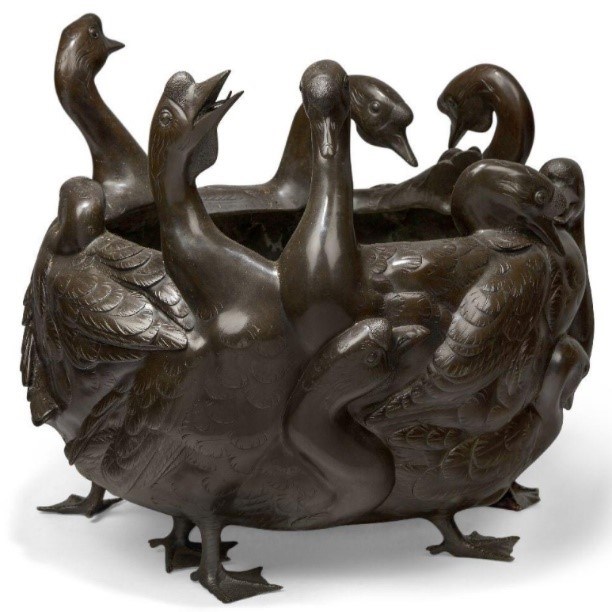 Lot 135, is another highlight on offer, a large bronze Japanese jardiniere. Hailing from the Meiji Period (late 19th-early 20th century), there is a seal to underside for Genryusai Seiya, the body cast with continuous geese, measuring 41cm high. This jardiniere comes with an price guide of £2,500- £4,000.

Lots 399 – 439 encompass The Gordon Watson Collection within the sale. One of London’s most respected antique dealers, Watson founded his gallery in the 70s in central London. The shop was a success from its foundation and throughout the years has welcomed numerous high-profile clients including Elton John and Mick Jagger. Watson has appeared on the Channel 4 programme Four Rooms and The Extraordinary Collector, which saw him visit and add items to distinguished English collections.  A passionate collector, the pieces offered in the Fine & Decorative sale includes ceramics and furniture, ethnographic and European sculpture and architectural statement pieces. 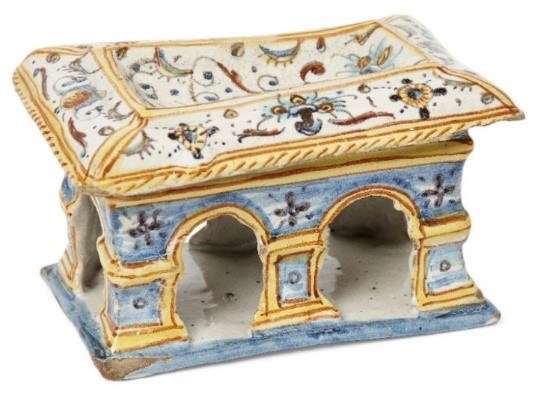 Highlights from the day two auction 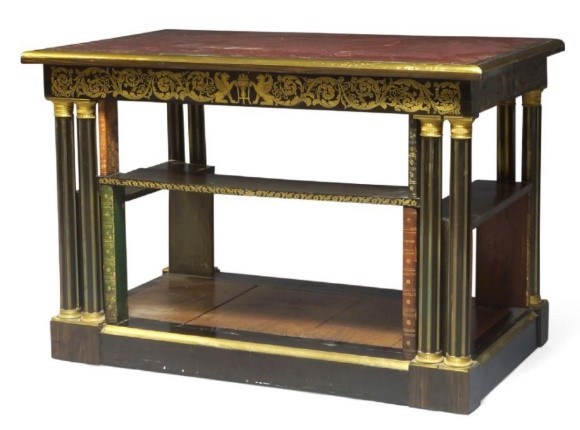 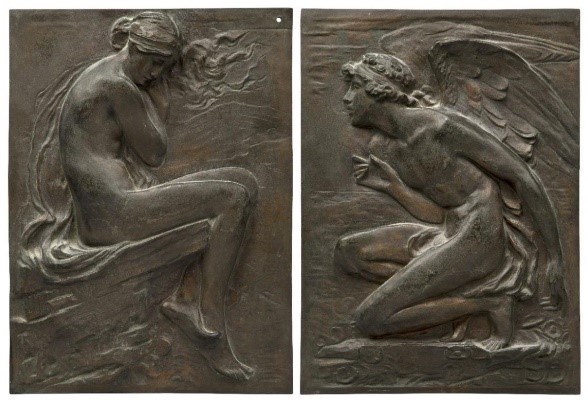 After Harry Bates, British, 1850-1899, a pair of bronze relief plaques from the Story of Psyche, late 19th century

Lot 667, after Harry Bates, British, 1850-1899, a pair of bronze relief plaques from the Story of Psyche, late 19th century, comes with an estimate of £1,200- £1,800. One plaque depicting Psyche forsaken and alone, sitting on a rock, and trying to tie a fillet around her head, the other with Cupid kneeling, eager and expectant, and waiting for Psyche. Bates, who was a prominent member in the New Sculpture movement, attended South London Technical Art School, where he was taught by Dalou. He was admitted to the Royal Academy Schools in 1881 and subsequently worked in Paris, where he had contact with both Dalou and Rodin. Bates was profoundly influenced by Rodin in his view of sculpture as a means of expressing pure energy. 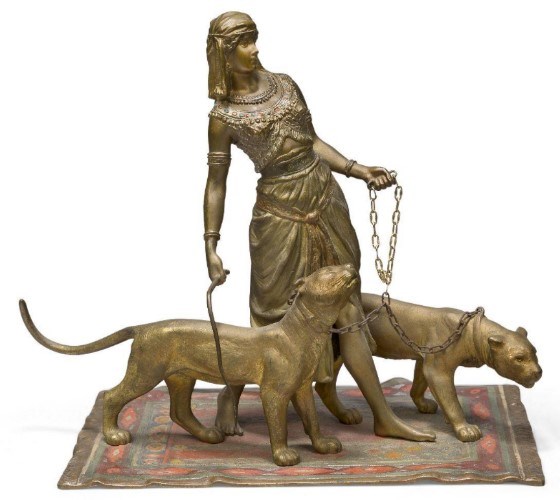 Fine & Decorative Including The Geoffrey And Fay Elliott Collection, The Property Of A Gentleman From A Covent Garden Apartment And The Gordon Watson Collection