March proved to be one of Roseberys most successful months of sales to date. The fourth week of March played host to three consecutive auctions full of outstanding results. The first of the three to take place that week, on Wednesday 24th March, was the Ted Few: An Idiosyncratic Eye Collection. Ted Few is a London based fine art and antique dealer, well known for his cabinet of curiosities containing idiosyncratic works of art from around the world. On offer at Roseberys was a wide-ranging selection of objects and paintings which he had collected throughout his expansive career, showcasing his diverse and unique taste.

Anna Evans, Head of Sale for works of art, clocks and sculpture, who managed all three sales that week commented ‘The unique and diverse collection of Ted Few attracted international competitive bidding, selling 83% by lot.  Highly respected and regarded by trade and private clients alike, Ted’s collection was received with eager anticipation and saw keen pre-sale interest from around the world.  This resulted in the sales, such as lot 147, a bronze model of a cello player by Leopold Fleischhacker, that was purchased by the great niece of the artist who lives in the US. With considerable condition report, image requests and video previews, as the result of the Covid lockdown and no public viewing, the sale nevertheless saw fervent bidding and many strong prices reflecting Ted’s expertise and inimitable taste.‘ 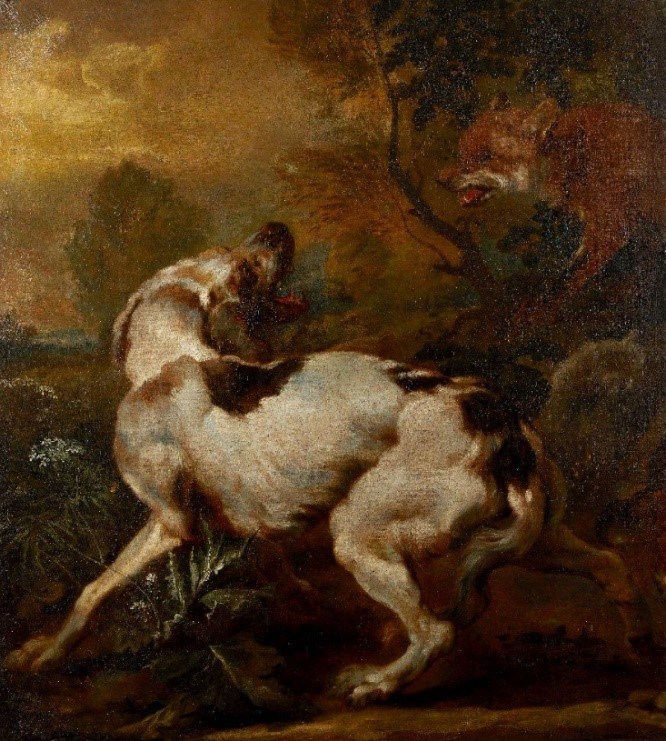 Leading the highlights was lot 250, a Follower of Paul de Vos, depicting a hound confronting a fox. Estimated to make £4,000 - £6,000, this work sold for over double its top estimate to make £13,750. This work, typical of the distinctive character of Flemish art in the 16th and 17th century, attracted competitive bidding from telephone lines before being purchased via RoseberysLive. There is another full-sized version of this composition at Trecice, Cornwall, of which this subject form the left-hand side. De Vos helped shape the development of the genre of animal and hunting scenes, exemplified by the current lot with its dramatic movement and tension. 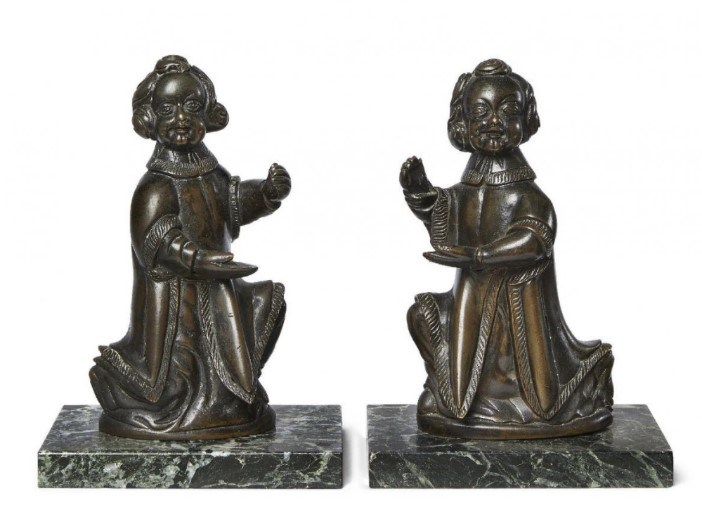 Lot 103, a pair of north German bronze models of kneeling angels, early 17th century, beat out their top estimate of £5,000 to realise the price of £9,375. These kneeling angels probably originally served as an ecclesiastical function on an altar in front of a tabernacle.  Their charming, round smiling faces give them a warm and gentle presence which caught the imagination of online bidders, eventually selling to the trade.

Lot 118, a bronze maquette of Eloy Gonzalo Garcia, the hero of Cascorro, by Ancieto Marinas Garcia, Spanish, 1866-1953 sold for £8,750. The dramatic story of Eloy Gonzalo García, the distinguished Spanish soldier in the Cuban War of Independence, who saved the fortress town of Cascorro from insurgents in 1896, is finely captured in this bronze maquette by Ancieto Marinas Garcia.  Two UK bidders saw off interest from Spain and the top bid of £8,750 secured the lot. 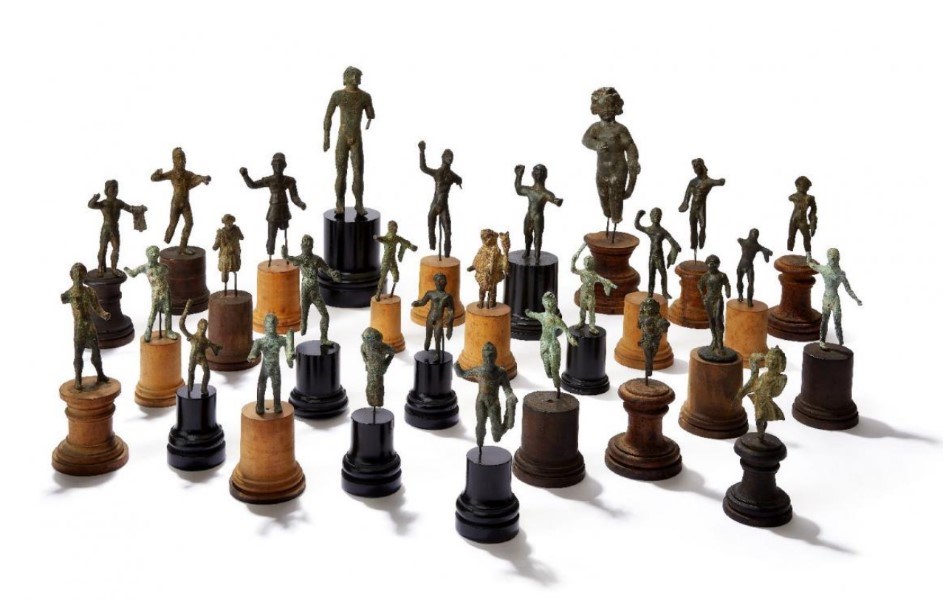 The Hohenzollern Collection of Ancient Bronze Statuettes, a large group of 27 ancient bronze figures, lot 76, went on to make £7,500. With provenance to the imposing stronghold of Sigmaringen Castle and the Hohenzollern family, avid collectors of works of art for several generations, this fascinating group of bronzes form an instant collection for the buyer.  Each statuette is unique and collectively they make a captivating group to study and admire.

Following on from Ted’s sale was the Fine & Decorative auction that took place the next day. This sale included a fascinating cross-section of items to suit all tastes and budgets. Anna Evans commented on the sale: ‘Selling at 88% by lot, the first Fine & Decorative sale of the year was led by a collection of Masonic items avidly fought over by connoisseurs and collectors in this field.  All sections of the sale from silver to sculpture and furniture saw competitive bidding with strong prices achieved across the auction.’ 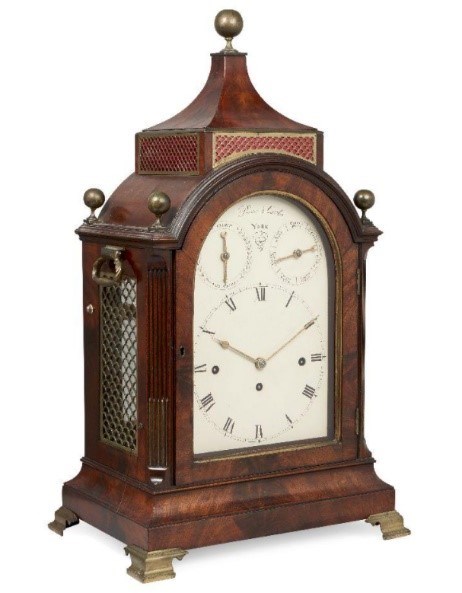 Leading the highlights in the Fine & Decorative sale was a George III mahogany eight day striking musical bracket clock by Prince & Cattles, York, lot 385. This was the most surprising sale of the day, estimated to make £700 - £1,000, this fine clock was bid up to the price of £6,875. Epitomising the superb engineering of a clockmaker’s skill, this musical clock with twelve bells exceeded expectations with competitive bidding from six telephones and online platforms. 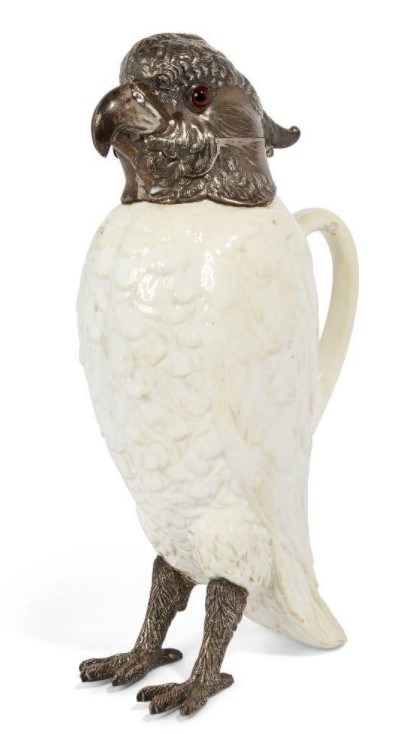 Coming with an estimate of £1,000 - £2,000, lot 419, a silver mounted Copeland Spode porcelain novelty claret jug sold for three times its estimate at £6,000. Modelled in the form of a cockatoo with coloured glass eyes and textured plumage, novelty jugs of this type always attract interest.  The large size and good, but not perfect condition, ensured the highlight result of this entertaining jug.

A Napoleon III ebonised and brass inlaid vitrine cabinet, lot 485 ensured plenty of pre-sale interest and warranted it to make four times its top estimate of £1,000 to make £5,000 at auction. This was no doubt down to the fine inlaid scroll panels, brilliant craftsmanship and excellent condition. 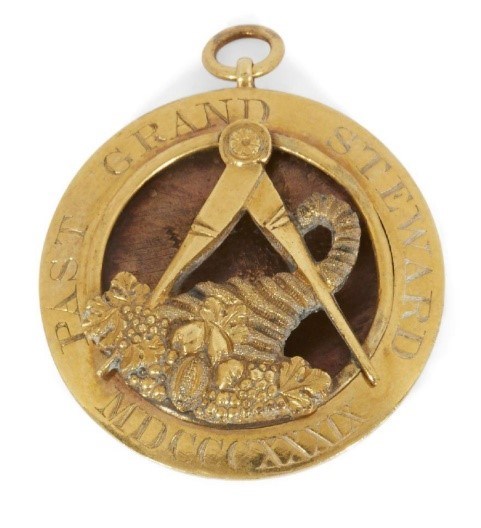 Lots 165-236, a collection of Masonic items, including jewellery, ceramics, glass and books were a highlight section within the sale. Selling at 98%, this group of lots attracted considerable pre-sale interest. The mysteries of masonic lodges captured people’s imagination and resulted in equally inspired hammer prices. Lot 178 was the highlight sale of the group. A Victorian gilt metal Masonic Past Grand Steward breast jewel, designed with masonic emblems, inscribed Bro. William Brown, Jerusalem Lodge No. 233, dated 1839, sold for £4,000, beating the estimate of £100 - £200.

The final sale of that week on Friday 26th March was the collection of Herbert Kennard, who died peacefully on 19th March 2020 at the great age of 100 years. Mr Kennard still lived in the apartment in which he was born, although he had travelled extensively and worked abroad. He had a deep affection for the arts, opera and ballet especially. As this collection on offer at Roseberys demonstrated Kennard also had a passion for late 18th Century English furniture, satinwood in particular. As well as the furniture, he also collected all manner of associated works of art including a variety of different boxes, tea caddies and trays.

Anna Evans commented ‘Herbert Kennard’s passion for late 18th Century English furniture and works of art, especially satinwood, captivated interest from private clients and the trade. Selling at 98%, it proved that traditional furniture and works of art market is very much alive for pieces of fine quality and provenance, the results of the Herbert Kennard sale are a fitting testament to his exquisite taste.’ 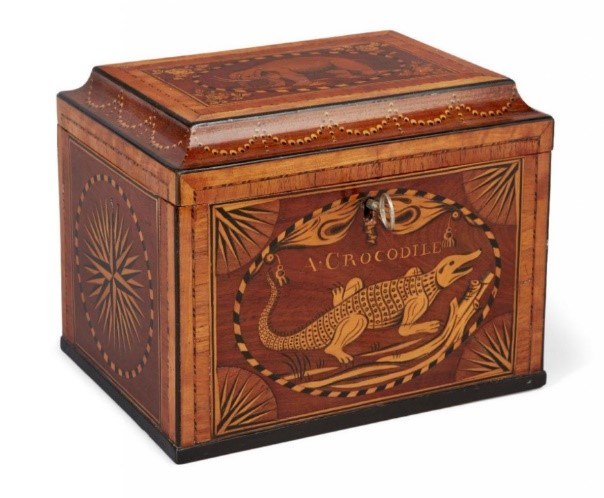 Lot 51, a rare George III inlaid satinwood three-division tea caddy, early 19th century was the highlight of the auction. The unusual marquetry inlay, generous size and extremely good condition of this tea caddy ensured numerous telephone lines competed to achieve the top price of the sale. Entered onto the market at £1,000 - £2,000, it went on to realise a price of £13,750. 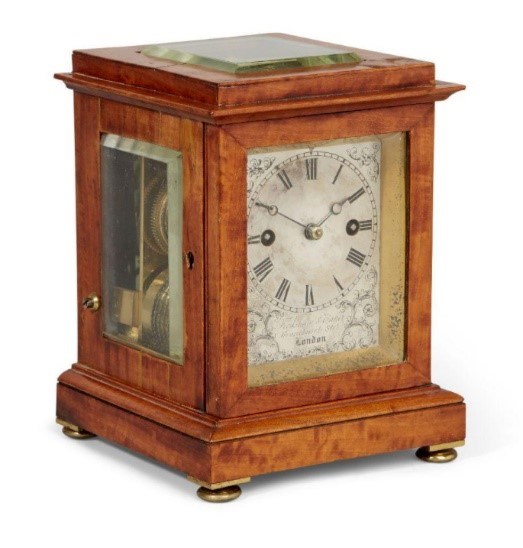 A Victorian satinwood cased library clock by Frodsham and Baker, circa 1860

Coming with an estimate of £1,000 - £1,500, lot 255, a Victorian satinwood cased library clock by Frodsham and Baker, circa 1860, realised the impressive price of £11,250. The partnership of Frodsham and Baker saw many interesting clocks, watches and chronometers being produced in the mid-19th century. This fine example, of petite size, has an eight-day twin chain fusèe movement with dead beat escapement, striking on a bell. 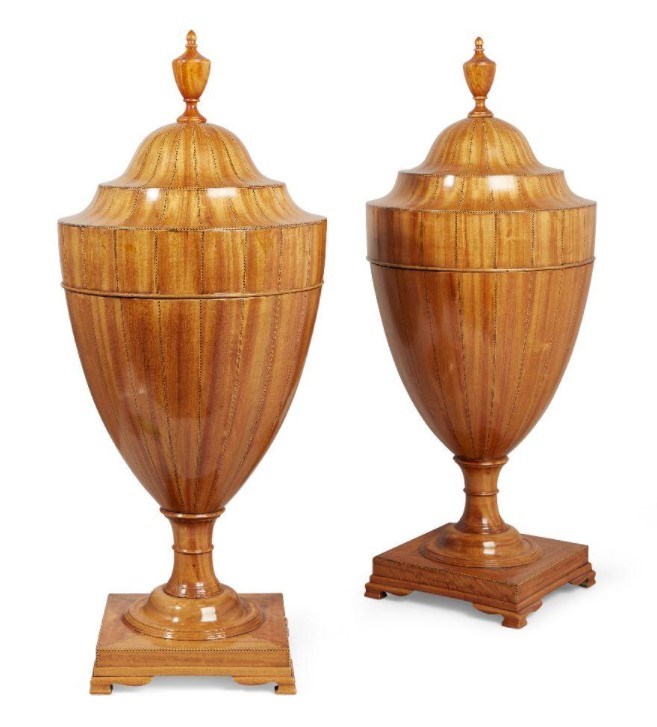 Estimated to make £800 - £1,200, lot 108, a pair of George III Sheraton satinwood cutlery urns made a price far exceeding their top estimate, realising £7,500. The collection was full of fine examples of 18th century satinwood and this pair of cutlery urns were no exception.  Achieving a final hammer price more in keeping with the furniture market over 10 years ago, the lot exemplified Kennards collecting taste. 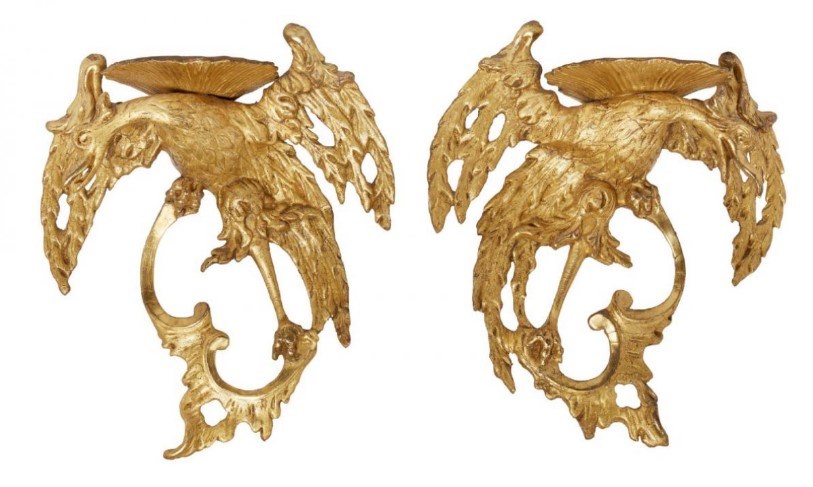 Lot 100, a pair of George II giltwood and gesso Ho-Ho bird wall brackets, were bid far over their top estimate of £2,000 to make £6,875. These brackets of good size and fabulous quality have a particularly elegant, flowing and well executed design, with lovely detailed carving throughout.

The department are now welcoming consignments for the sale