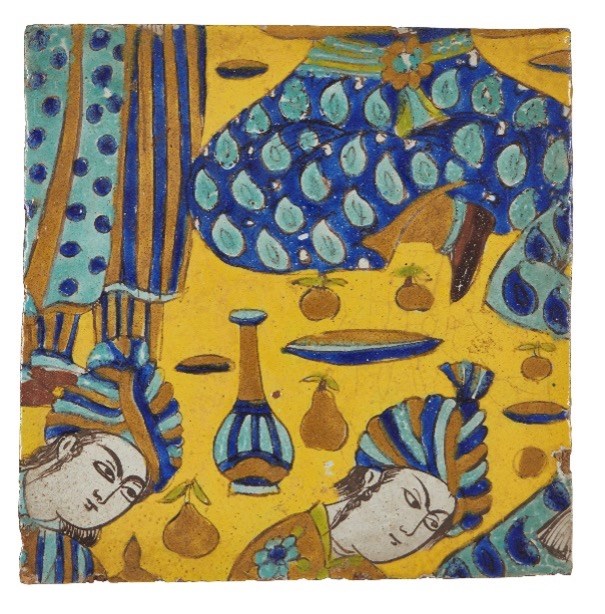 ROSEBERYS LONDON: Roseberys were proud to present the first Islamic Arts and Manuscripts auction of the year on Wednesday 31 March that included 320 lots in total. The sale that offered metalwork, pottery, manuscripts, glass, decorative arts, paintings and textiles, from the Islamic and Indian areas from the mid-7th century to contemporary works, yielded plentiful highlights, with many lots far exceeding their top estimate.

Alice Bailey, Head of the Islamic & Indian Arts department commented: ‘The March 31st sale of Islamic Arts and Manuscripts, including Antiquities, was a hugely successful, buoyant sale with an 80% sold rate. The trend for active online bidding continued with three of the top lots going to internet bidders. The Antiquities section, which comprised works from the Werner Forman Collection (1921-2010) and private family collections, was led by a shabti of the 18th Dynasty Egyptian ruler Akenhaten which sold for £32,500. Islamic works of art sold strongly with early pottery making a strong comeback from recent years, in particular Cannakkale works from the collection of Byzantine academic Theo Sarmas (1938-2018) and a spectacular early 11th century Khorasan inlaid bronze tray from Iran. The sale sold several Ottoman qur’an for strong prices and a gold decorated early Kufic Maghrebi text for £30,000. Rounding off the sale was the contemporary Middle East section which saw a work by Iraqi artists Rafa Nasiri, Jaber Alwan and Rakan Dabdoub achieve strong prices.’ 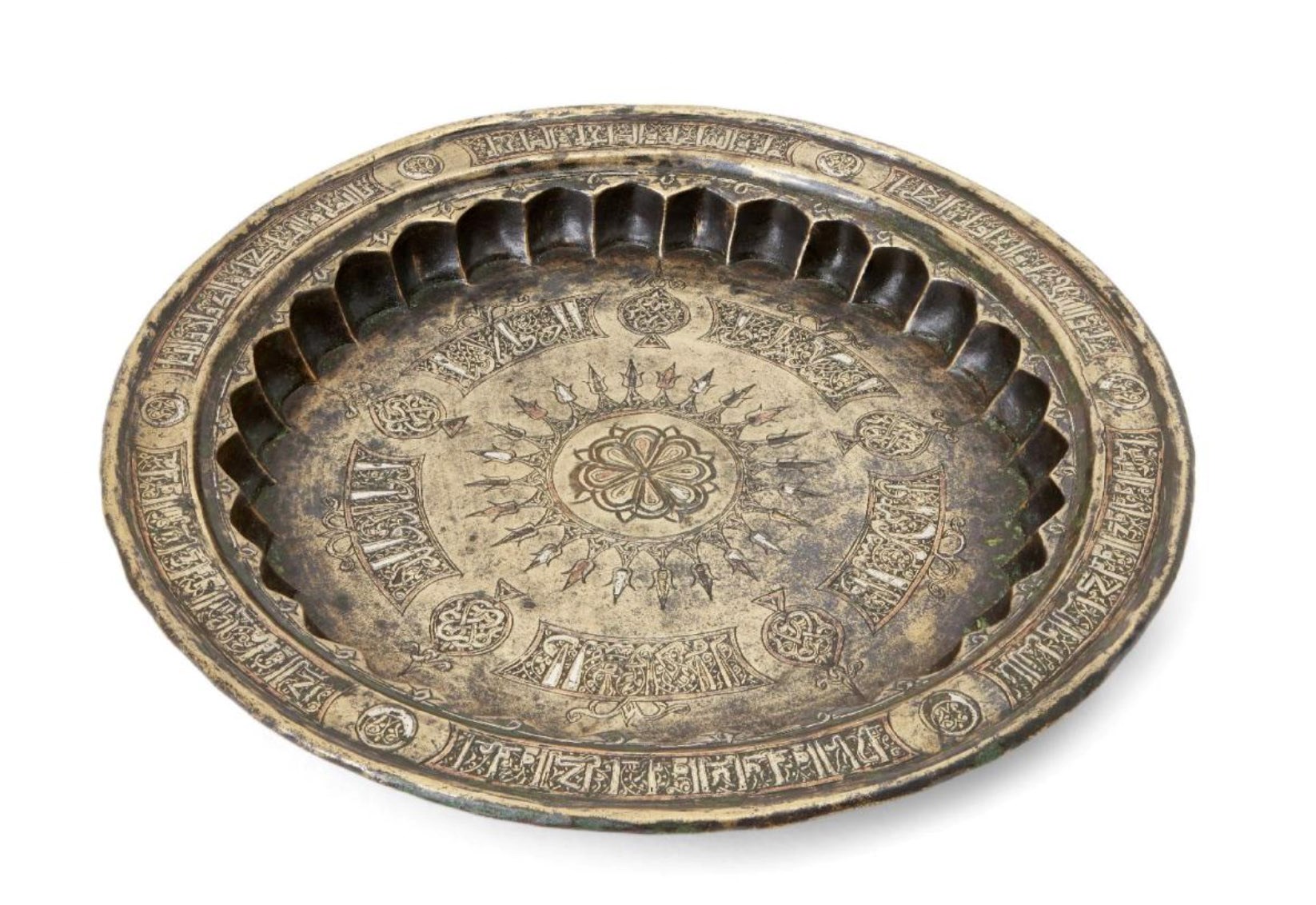 Leading the sale was lot 211, a Khorassan silver and copper inlaid bronze tray from North East Iran. Dating back to the 12th century, the tray which measures 29.4cm. diam, is decorated with silver-inlaid naskh and kufic inscriptions. Originally acquired in the UK in 1976, the tray had stayed in the same private collection in the UK until the sale. Entered onto the market at £2,000 – £3,000, the Khorassan tray made an impressive result of £35,000. 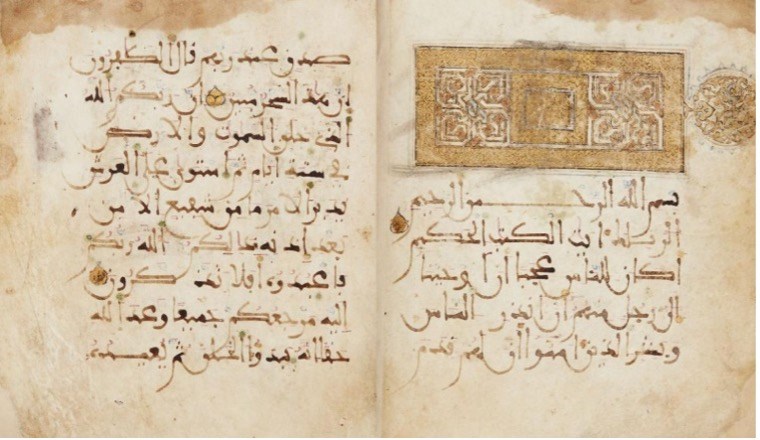 Elsewhere in the sale, leading the highlights of Qur’ans on offer, coming with an estimate of £3,000 - £5,000, was lot 61, which made £30,000 at auction. The North African or Al-Andalus Illuminated Qur’an Section on vellum, circa 13th century, 69ff, begins with Qur’an X (sura Yunus) and ends with Qur’an XIII (sura ra’d), verse headers in gold Kufic script with gold palmette. It was later bound in brown leather binding with tooled medallion. 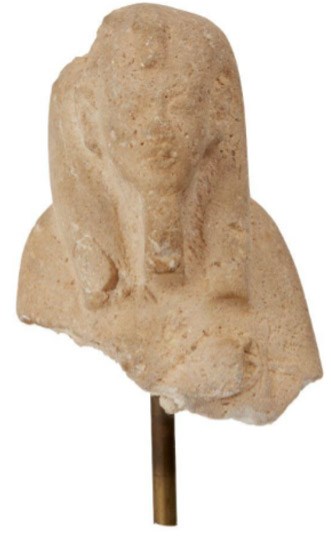 Another surprising result within the auction was lot 26, which beat its top estimate of £900 to make £30,000 at auction. The yellow quartzite upper section of a shabti of Akhenaten, probably Egyptian New Kingdom, from the Amarna Period, was made in the 18th Dynasty, circa 1353–1336 B.C. It came with a notable provenance from a private collection in the UK, gifted to the present owner's father by Spink and Sons circa 1952, and by repute, acquired in 1910 by the then Bishop of Cairo who was a keen amateur Egyptologist. There is a similar example of a shabti of Akhenaten within the collection of The Metropolitan Museum of Art. 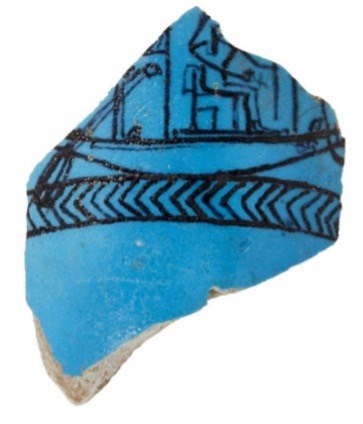 Entered onto the market with an estimate of £1,000 – £1,500 was lot 12, an Egyptian bright blue glazed composition vessel fragment, New Kingdom, circa 1400 B.C, which came with a provenance from the private collection of Werner Forman. The vessel fragment decorated with details in black showing a female deity, almost certainly Hathor, carrying a vertical sceptre, behind her is a falcon-headed steering rudder, made £3,750 at auction.

Coming with an estimate of £500 - £800 was lot 170, an Abbasid or Fatimid calligraphic tiraz fragment, from Egypt or Iraq, made in the 10th century. Made of plain weave linen woven in silk, glazed and framed, the fragment that measured 12.5 x 36cm also came from a private collection of Werner Forman (1921-2010). Several similar fragments exist in the Metropolitan Museum of Art, New York and in the Jameel Centre, Ashmolean Museum, in Oxford. This lot made over £6,000, its top estimate, realising the price of £6,875. 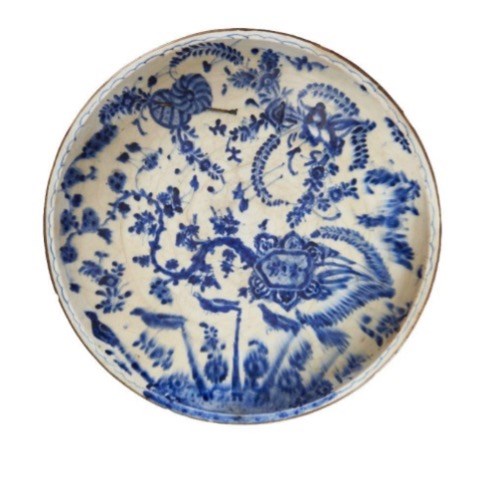 Also coming from the collection of Werner Forman, (1921-2010), acquired at the Delehar Antiquities and Works of Art Portobello, 5th July 1964, was lot 233. The large Kutahya blue and white pottery charger, from Turkey, made in the 16th century, came with an estimate of £300 -£800. Decorated with leaves, flowers and fruits, the decorative plate that measures 38.5cm diameter, realised a price of £5,250. 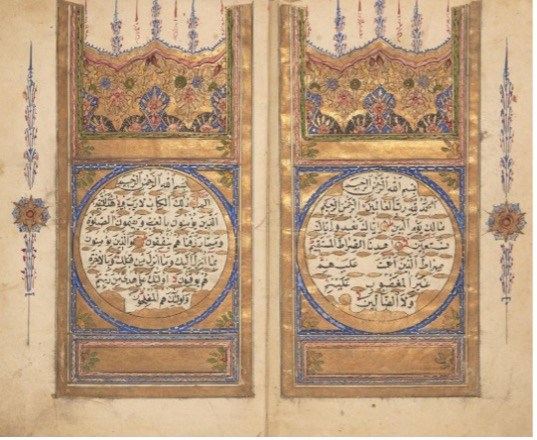 Coming with an estimate of £700-900 was lot 100, a Qur’an, from the Ottoman Turkey, dated AH 1282/1865-66AD and signed Al-Hafiz 'Ali, a student of Sulayman Al-Kashifi, who was a student of Ahmad al-Ghakif. The Arabic manuscript on paper, 303ff. plus two fly-leaves, each folio with 15ll. of black naskh script, in gilt brown morocco binding with flap, came with a provenance from Christie's, South Kensington sale and made the price of £2,750 at auction, over double its top estimate. 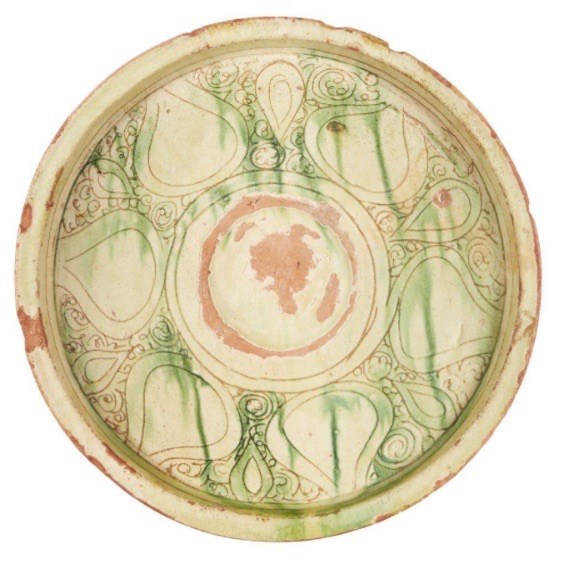 A large Byzantine scraffiato ware plate, 13th-14th century, with green glaze and incised decoration, with large foliate design around the interior on a ground of scrolls, 27cm. diam.

Lot 152, a large Byzantine scraffiato ware plate, from the 13th-14th century, came with an estimate of £300 - £500. The plate decorated with a green glaze and incised decoration, with large foliate design around the interior on a ground of scrolls, measuring 27cm. diam, made over double its top estimate, realising a price of £1,375. The plate came with a provenance from the Theo Sarmas (d. 2018) collection in London since early 1960s. Theo Sarmas was a London businessman who was a passionate collector of Byzantine ceramics and Greek coinage. Princeton University, New Jersey holds the Theo Sarmas collection of medieval Greek coinage. 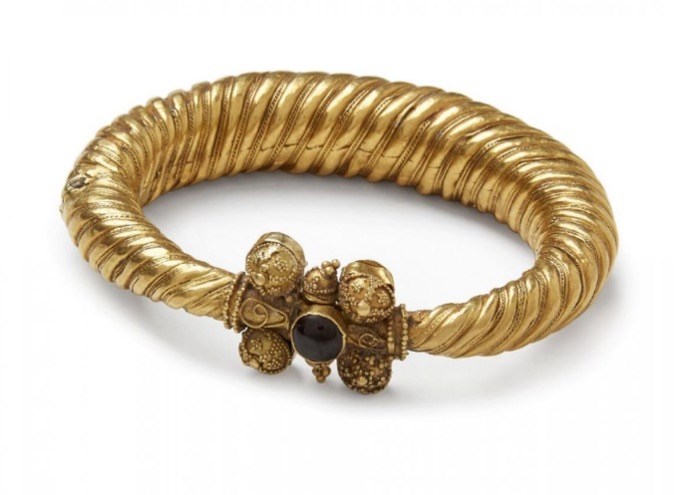 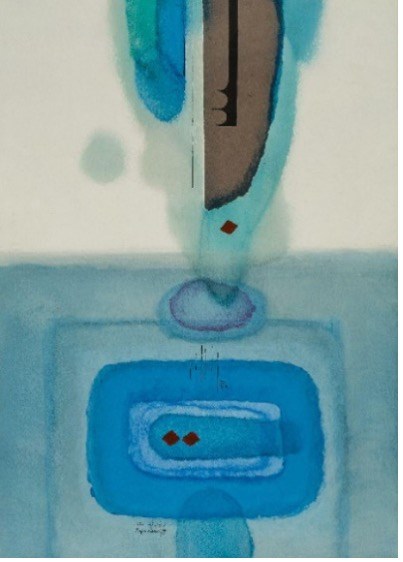 Rounding up the highlights on offer within the auction was lot 317, a mixed media on paper, measuring 68 X 49cm, by Iraqi artist Rafa Nasiri (1940-2013). Using abstract figuration as his main source of content, Rafa Al Nasiri creates compelling compositions that represent nature as well as Arabic calligraphy. Most notably inspired by Chinese arts, mainly the technique of ink drawing and the use of negative space, Al Nasiri merges deeply saturated colours together with fluid gestural lines to create enveloping abstracted and spatial landscapes. Estimated to make between £600 - £700 the contemporary work of art made £1,375 at auction.