Fiona Baker, Head of the Design: Decorative Arts 1860 to the Present-Day department commented: ‘The Design Department and Roseberys were delighted to welcome back clients for viewing and bidding, albeit by appointment only and limited numbers. The sale was well received and provided a comprehensive range of Design from the 1880s up to the present day. It included a set of four George Edmund Street ‘Klismos’ chairs, a Christopher Dresser articulated letter rack, an Arts & Crafts Punnett elbow chair, Art Nouveau glass by Gallé and Daum and ceramics by Zsolnay, a Heals limed oak cabinet and Le Verre Francais glass from the 1920s and 30s.  The post-war furniture and lighting were very popular with buyers, competing for Charles & Ray Eames’s famous lounge chair and ottoman, as well as furniture from Sweden, Norway, Denmark and Italy. A group of eight pieces of Fornasetti proved very popular and extra staff had to be brought in to man the telephones. The sale was 79% sold and in addition to our UK buyers we welcomed successful bidders from the US, Canada, France, Germany, Denmark, Netherlands, Belgium, Italy and Hungary. Our next specialist sale will be on the 12th October and the deadline for welcoming consignments will be at the end of July.’

Among the sale highlights was a private collection of eight pieces by Pierro Fornasetti, which reached a combined total of £52,000. These strong results again prove the seemingly timeless appeal of Fornasetti’s unique and distinctive designs. Leading the highlights within the Fornasetti items on offer was lot 245, a whimsical ‘Archittetura’ trumeau cabinet, which was numbered and dated ‘6-8-89’, with a label ‘Fornasetti, Milano’. The cabinet was made with lacquered wood, lithographically printed with classical architectural designs, two doors open up to six glazed shelves, above fall enclosing illuminated storage space and a writing surface, over three graduated drawers. Estimated to make £7,000 - £10,000, the cabinet realised a price over double its top estimate of £20,000. 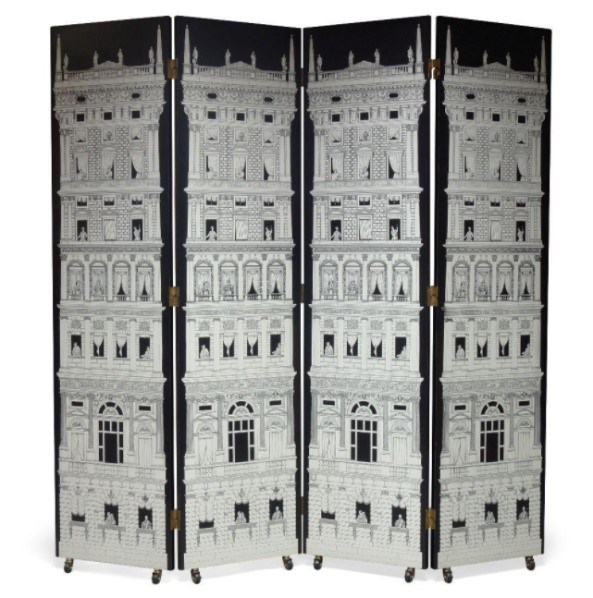 Another leading highlight within the Piero Fornasetti collection was lot 240, a ‘Grattacielo del Rinascimento’ four-fold screen c.1990. Like the cabinet, this screen was also made in lacquered wood, lithographically printed with architectural designs, coming with the label. It beat out its top estimate of £4,000 to sell for £7,500. Coming with an estimate of £400 - £600, was lot 27, a limed oak cabinet, c.1930, one drawer inset with ivorine disc, by Heal & Son British company. Heals was established in 1810 as a feather-dressing business by John Harris Heal and his son, John Harris Heal Junior. The cabinet from the esteemed furniture company came with two panelled cupboard doors enclosing one shelf, above three graduated drawers, on square section feet. Measuring 140cm high, 78.5cm wide and 47.5cm deep, it was formally property from a private London collection. This lot far exceeded its top estimate on the day to make £5,000. 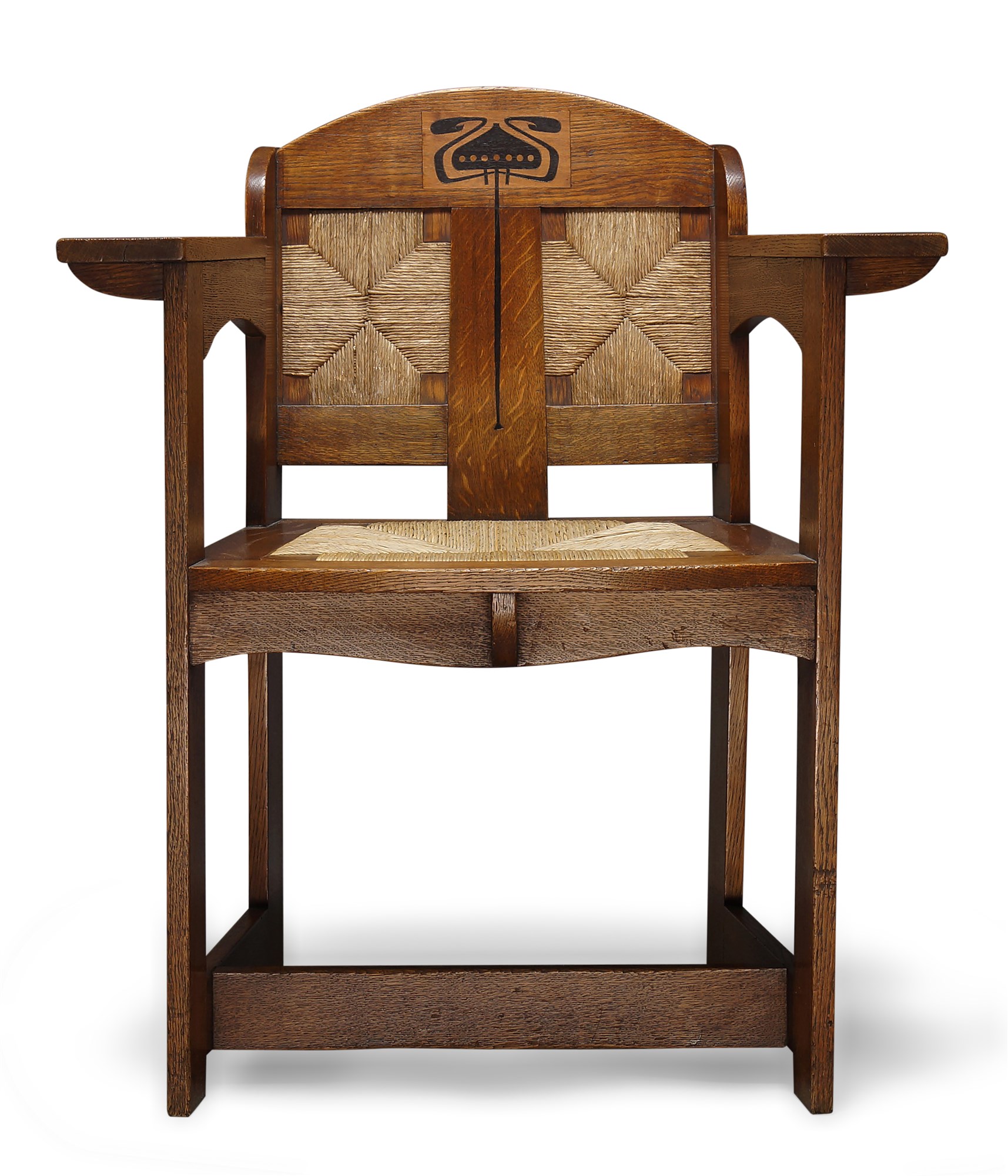 Coming from a private collection, with an estimate of £1,500 - £2,000, was lot 32, an Art & Crafts inlaid oak and rush seated arm chair, designed by E.G. Punnett. Created in 1901 for the High Wycombe based firm of William Birch, who retailed through Liberty & Co, the chair of architectural form, perfectly fits Punnett's design principles, sturdy yet delicate with true architect belief, making it a chair for the true design purist. A similar chair can be found in The Victoria & Albert Museum. On the sale day, this chair was bid up to over its top estimate, selling for £3,000. A tall ‘Amphora’ ceramic Art Nouveau ‘Bat and Berry’ vase, measuring 53.5cm high, designed by Paul Dachsel and made by Reissner, Stellmacher & Kessel in 1901, was offered to the market with an estimate of £8,000 - £10,000. Rendered in a palette of mauve, cream, yellow and green, with gilt highlights, Amphora’s Berry Bat Vase has a broad reticulated neck carved with bats and berries, further embellished with three bats and slender stems in shallow relief, and lily pads and stems in high relief to the body. The bat was a popular motif of Art Nouveau style. The vase is printed with red factory marks, impressed Amphora in an oval, and with impressed numbers 668 41. Paul Dachsel was the son-in-law of Alfred Stellmacher, the founder of Amphora Pottery company in Turn-Teplitz, then in Austria. He served as a designer at Amphora from 1893 until 1905. There, he was instrumental in creating new motifs and designs inspired by the voluptuous, organic Art Nouveau style, as well as incorporating Japanese shapes, such as the sake bottle, to a traditional Victorian vase body. In 1905, Dachsel founded his own pottery studio, Kunstkeramik Paul Dachsel. He continued to draw inspiration from Art Nouveau and created designs that favoured simple forms elaborated with applied handles, rims and ornaments. In many examples, he favoured tertiary colours and folded, flat, and soft-edged shapes, giving his work a fairy-tale quality, such as the lot on offer at Roseberys. This vase ended up realising an impressive price of £10,000. 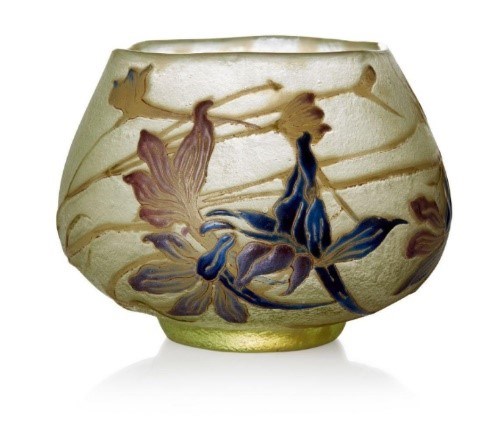 Lot 69, was an enamelled glass vase, by the French artist and designer who worked in glass, Emile Gallé (1846-1904). Made in c.1900, signed in relief Gallé, the globular form with pentagonal neck-rim is acid-etched in relief with trailing flowers and stems, heightened with enamels, against a textured ground, measured 9.5 cm high, and12.5 cm wide. Emile Gallé is considered to be one of the major innovators in the French Art Nouveau movement. Estimated to make £1,000 - £1,500, the vase went on to make £3,250. 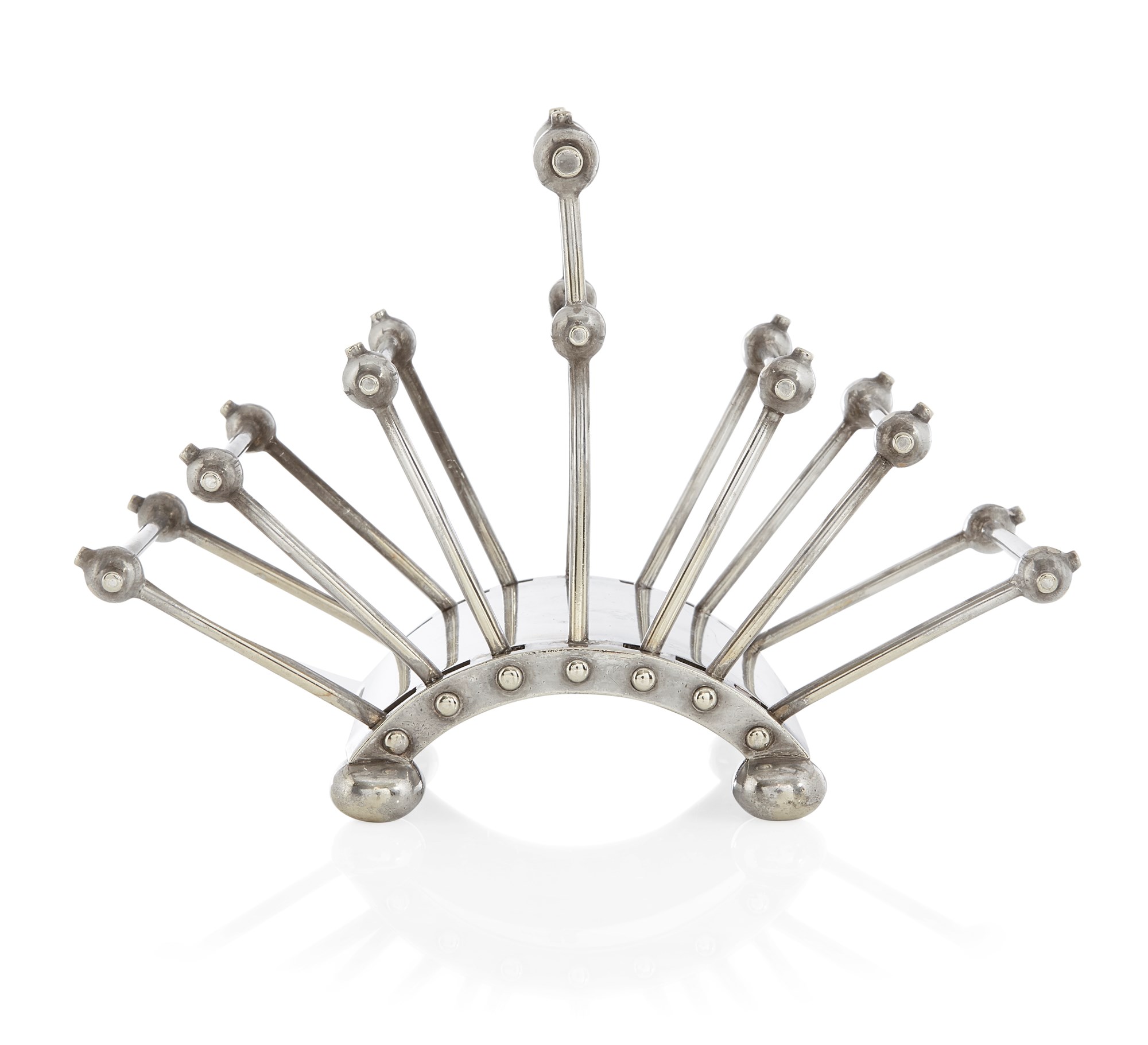 Offered onto the market with an estimate of £800 - £1,200 was an electroplated articulated letter and or toast rack, designed by Dr Christopher Dresser (lot 17) (1834-1904) made by Hukin & Heath. Dr Christopher Dresser was a British designer and design theorist, now widely known as one of the first and most important, independent designers to date. Many of his designs can fairly readily be placed in the context of the orientalising and historicising taste of the day, but his metalwork designs stand out as almost impossibly austere for the high Victorian era. In the 1870s and '80s he composed arresting geometric shapes, such as the lot on offer, that are often seen as harbingers of Modernism. The rack that measures 12.4 cm high and 17.5 cm wide when open and has the mark of Hukin & Heath, numbered 2555, stamped registration lozenge for 1881, realised a price of £1,188 at auction.

A more contemporary pair of chairs on offer within the sale, were a pair of ‘Seal’ lounge chairs by Danish designer Ib Kofod-Larsen (1921-2003), produced by Brdr Petersons Polstermobelfabrik. Created in 2010, manufacturer’s label to underside, the chairs are upholstered with tan leather to the seat on oak frame with tapered supports. Coming with an estimate of £1,200 - £1,500, these chairs ended up making £9,375. This sleek pair of bronze 'Volubile' Lamps, c.2006, by French designer Hervé Van Der Straeten that were on offer with an estimate of £1,500- £2,500, realised a price over three times the top estimate, selling for £6,000. First known for his jewellery designs, Van der Straeten is now best known for his bold furniture and lighting, which blends various materials. 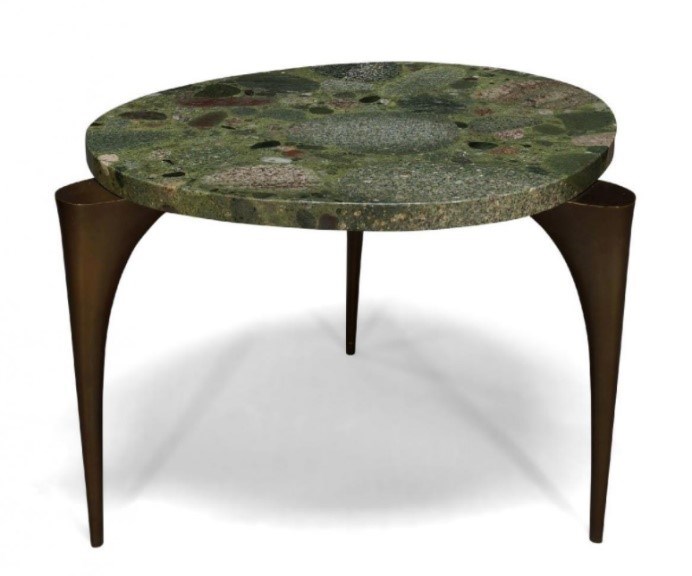 Another item on offer by the French designer Hervé Van Der Straeten that sold over estimate was a bronze and Verde Marinace granite side table, created in 2010. The ovoid shaped green granite top on three patinated bronze and tapered supports, measured 48cm high, 62cm wide and 48cm deep. This table went on to realise the same price as the lamps at £6,000, overtaking its top estimate of £4,000. 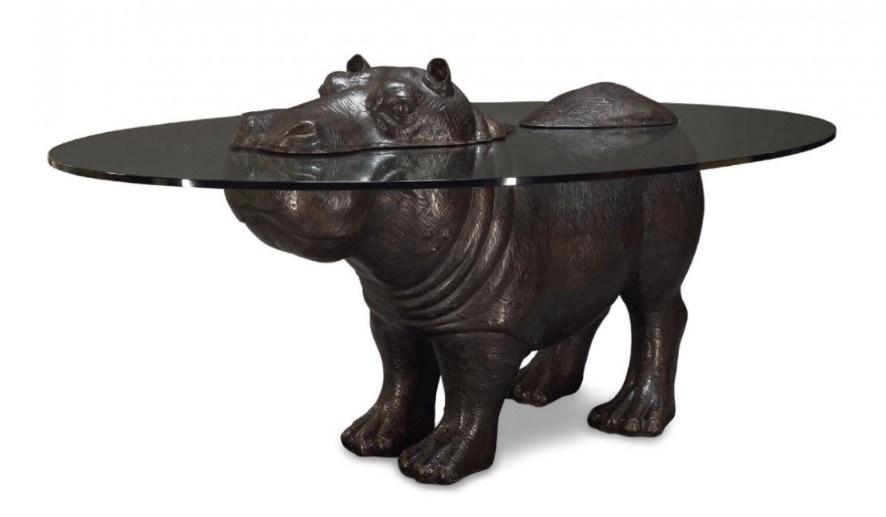 Rounding up the highlights on offer was this joyous table by British artist Mark Stoddart (B.1964). The bronze and glass ‘Hippo’ dining table was created in 2000 and made £5,250. Mark Stoddart is a Scottish sculptor and furniture designer, who is best known for his glass topped coffee and dining tables which incorporate bronze sculptures, such as the lot offered at Roseberys.

The next Design: Decorative Arts 1860 to the Present-Day auction will take place on Tuesday 12 October.

We are now welcoming consignments for this auction. To request a complimentary valuation from one of Roseberys specialists please contact decarts@roseberys.co.uk