Roseberys London: Roseberys were delighted to begin the Autumn auction season with the Design: Decorative Arts 1860 to the Present-Day sale, that took place on Tuesday 12 October. This auction embraced the Decorative Arts, from Gothic Revival to the present day, and included the Aesthetic, Arts & Crafts Movements and the Art Nouveau and Art Deco periods. Alongside this, studio ceramics and modern designs of the post-war decades, including ceramics, silver, metal wares, sculpture, jewellery, lighting, rugs, textiles and furniture were offered to the market. The highlight of this auction was the collection of 27 lots of Loetz iridescent glass, property of a Private Collection, which was bid on by glassware aficionados around the globe. 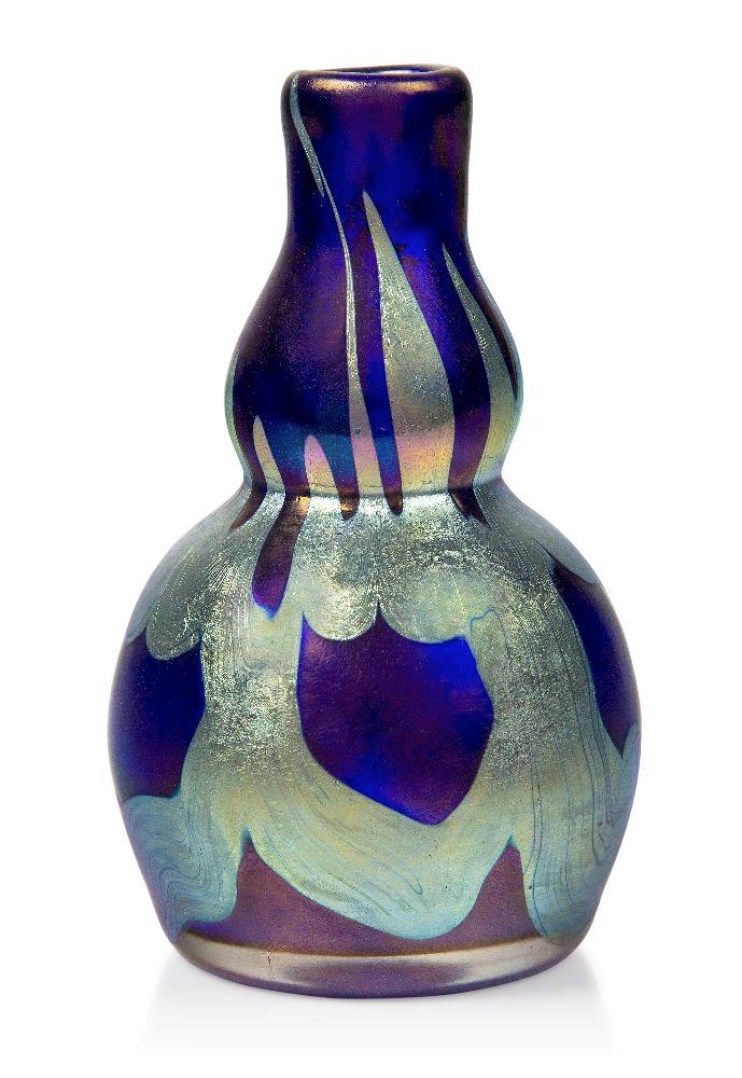 Fiona Baker, Head of the department comments: ‘The sale was very successful and showed the full spectrum of Design – 1860 to the present day.  We had a good mix of Arts & Crafts furniture, with silver and metal wares from Liberty & Co and ceramics by De Morgan. The Art Nouveau period was represented by Loetz, Gallé and Daum and Art Deco by Lalique glass and the sculpture of Chiparus, Le Faguays and Bouraine.  The Post-War furniture, lighting and furnishings proved very popular with private people wanting to buy something special for their homes. Our next sale will be in April 2022 and we are accepting entries now.’ 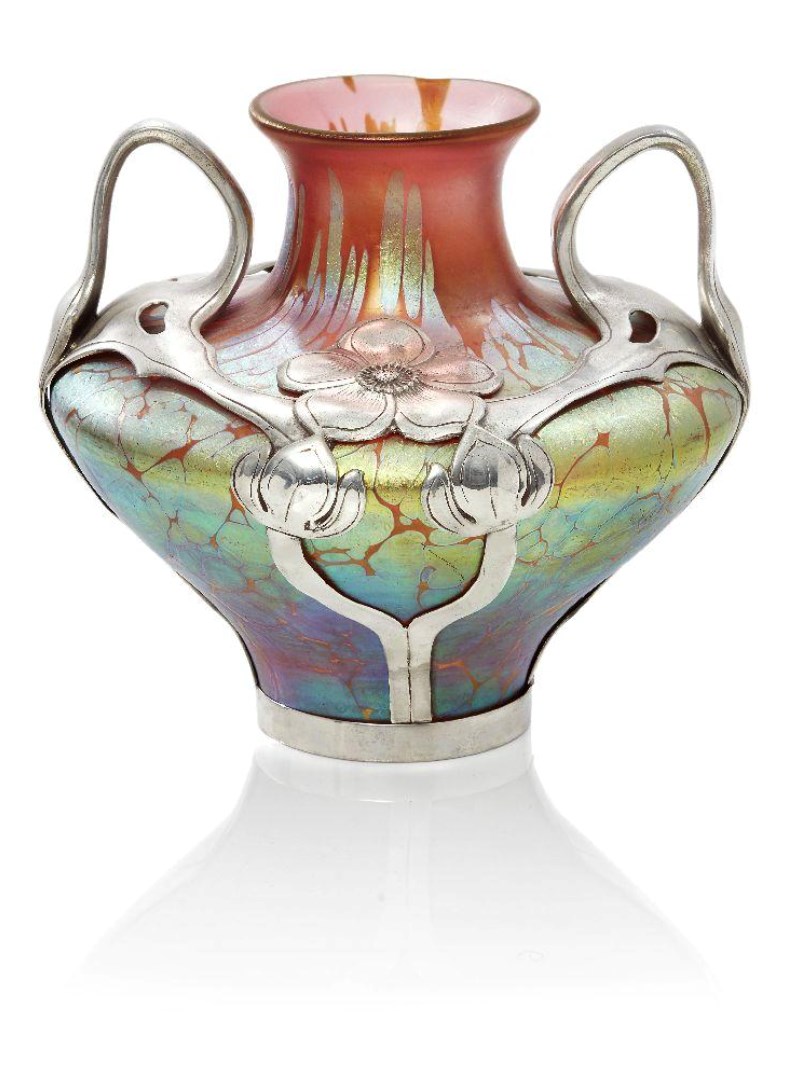 The rare collection of Loetz iridescent glass from a private collection kick-started the auction, with an overall price total of £30,250 – with only 3 lots from the collection of 27 not selling. The collection was fiercely bid on by buyers in the room and all around Europe, including bidders in Croatia, Austria and Germany, via the phone and online. 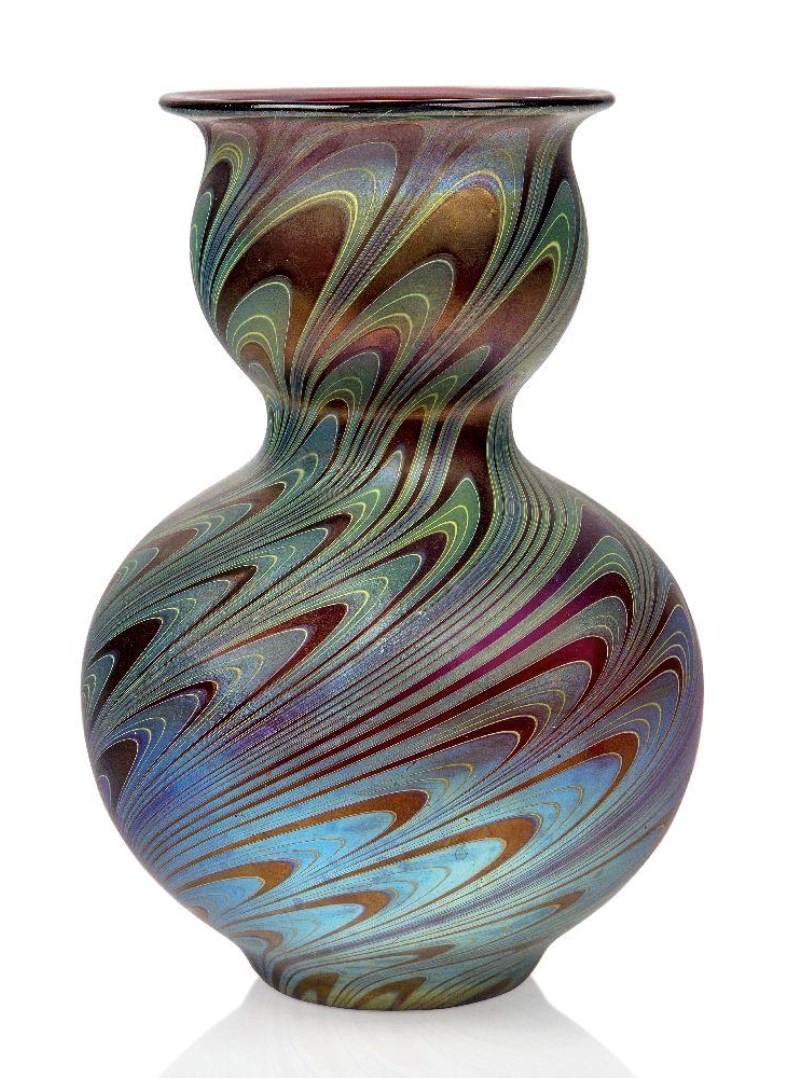 Lot 26, a Loetz iridescent Rubin Phaenomen double-gourd glass vase was the highlight sale from the collection. The vase made with a red glass body, decorated with silvery-blue and green pulled banded threads on the diagonal, measuring 22.5 cm high, sold for £3,750, against an estimate of £800 - £1,200. This lot was bought by an eager bidder in the room. 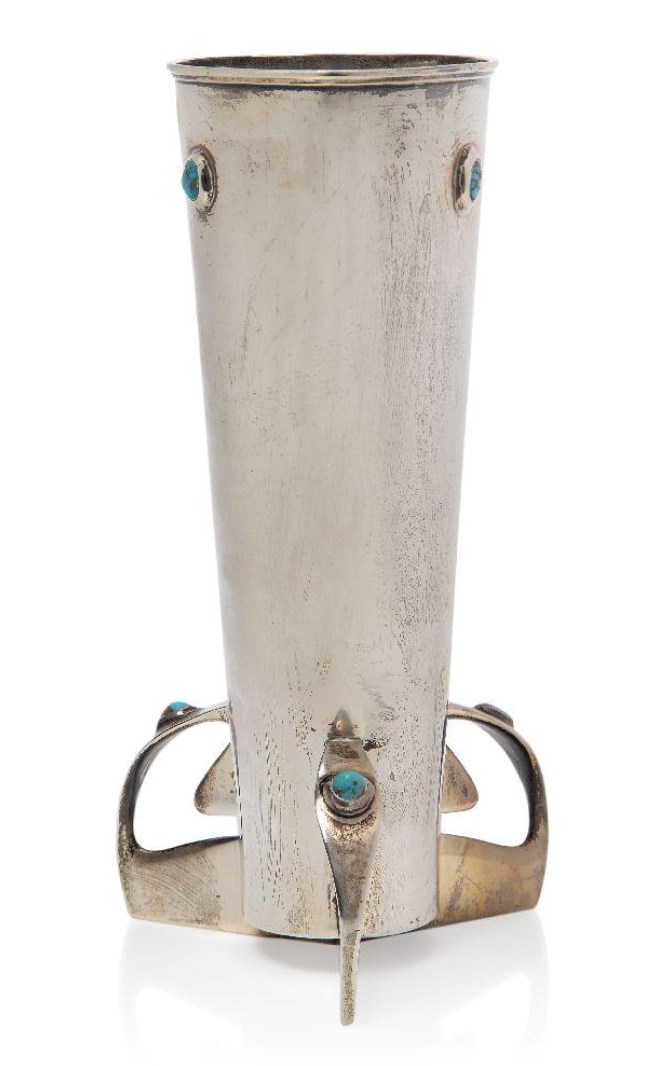 Entered onto the market with an estimate of £1,500 - £2,500, lot 117, a silver vase with turquoise matrix cabochons by Archibald Knox (British 1864-1933) for Liberty & Co, made £6,875 at auction. This fine example of Knox’s work has the mark of Liberty & Co and Birmingham hallmarks 1905, measuring 19.8 cm high and weighing 9.4 ozs. It sold to a London based buyer, who bought the lot on RoseberysLive online bidding platform.

Lot 200, Demetre H. Chiparus (Romanian/French 1886-1947), ‘The little sad one’ a patinated and gilt bronze figure, c.1925, signed on marble base 'D.H. Chiparus', and 'Etling Paris', measuring 30.5 cm high, former property of a lady, sold for £3,750. A UK based telephone bidder fought to secure the lot against internet bidders, which sailed above its top estimate of £3,000. Fiona Baker commented ‘This was a particularly good cast and in good condition which collectors particularly appreciated.’ 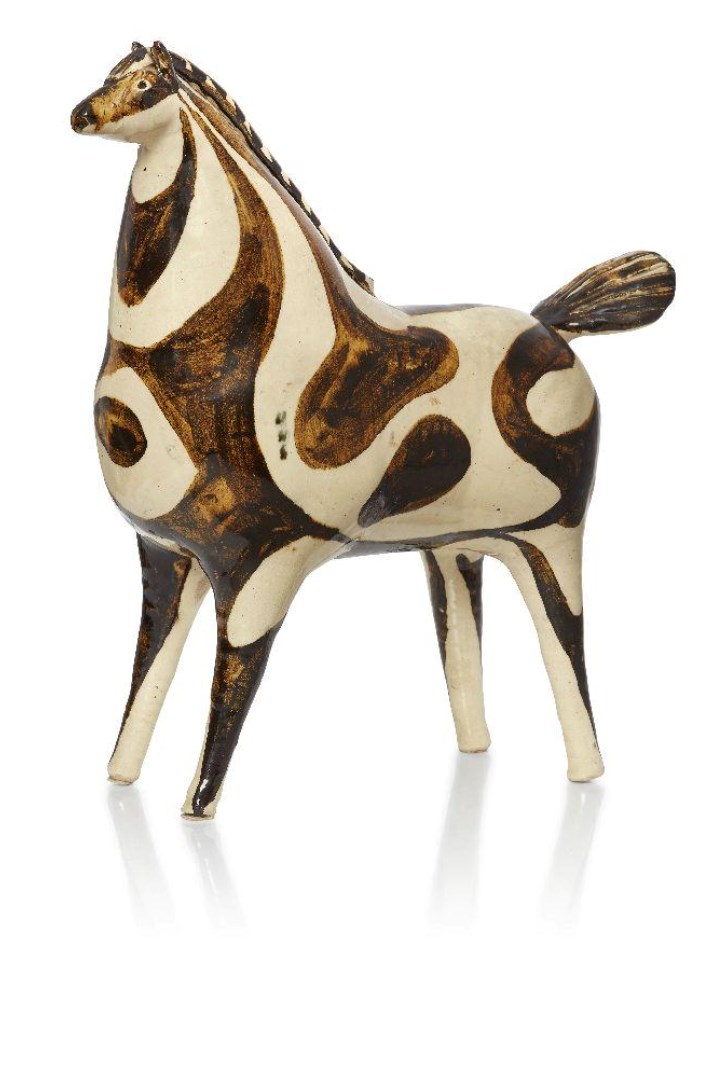 Lot 242 by James Tower (1919-1988), who is one of the most distinctive figures in post-war British ceramics was the highlight ceramic sold at auction that day. The glazed earthenware model of a horse, 1952, signed 'Tower' on the underside of the tail, measuring 34 cm high, 32.5 cm long, from a Private Collection sold to a UK based phone bidder. Originally estimated to make £1,500 - £2,500, the horse model which came with its original receipt from Gimpel & Fils, London, December 1952, sold for £3,750. Fiona Baker commented ‘This was a very appealing model with a good provenance that collectors responded to.’ 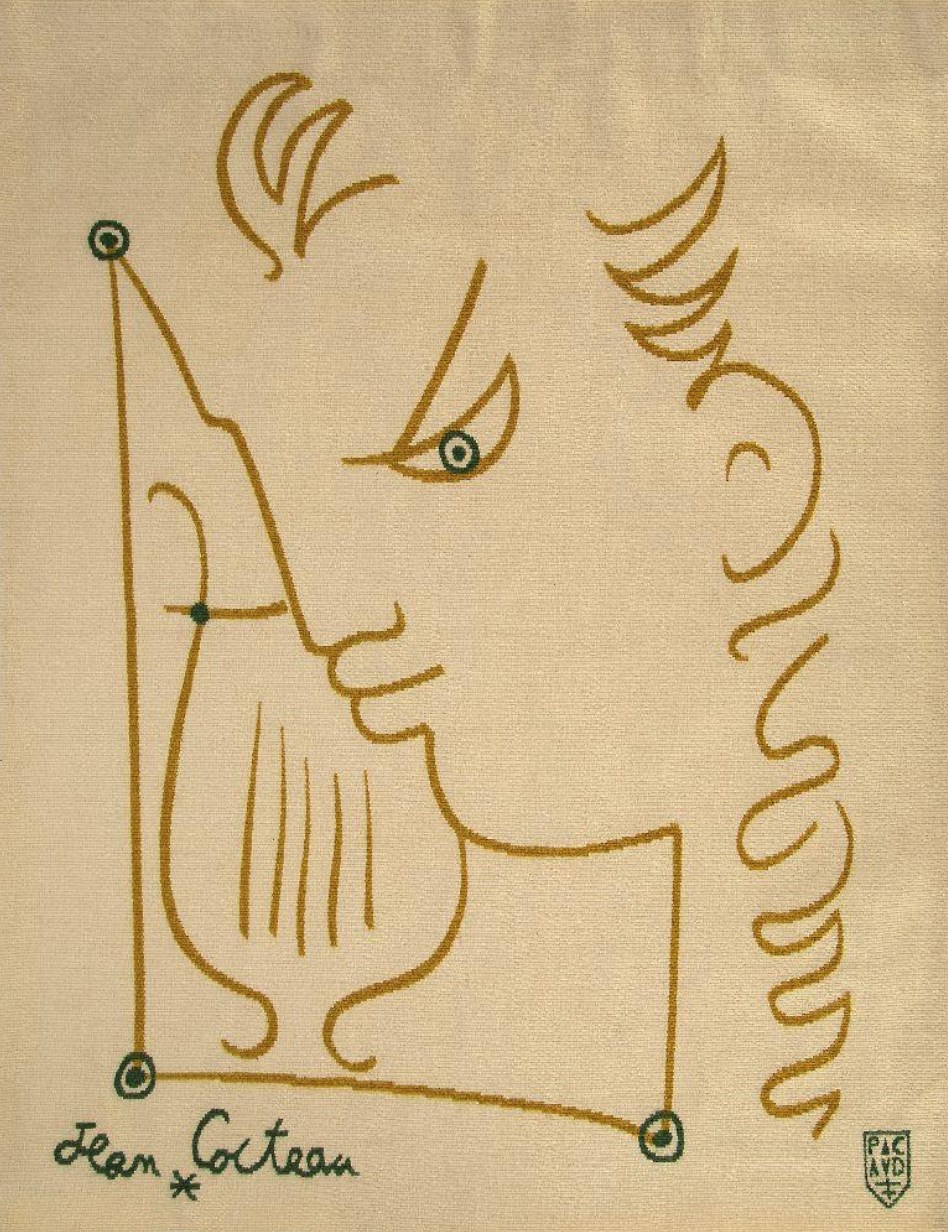 7 telephone bidders fought for the 'Orphee a la Lyre' tapestry (lot 308) by French artist Jean Cocteau, produced by Raymond Picaud, Aubusson, France, c.1960. Signed in the weave, 'Jean Cocteau' & 'Picaud', with Raymond Picaud label to reverse, depicting the head of Orpheus with Lyre, measuring 78.5cm high x 64cm wide, the lucky bidder who outbid everyone to secure the lot, was from London. Coming with a pre-sale guided price of £300 - £500, this lot made the outstanding price of £4,500. 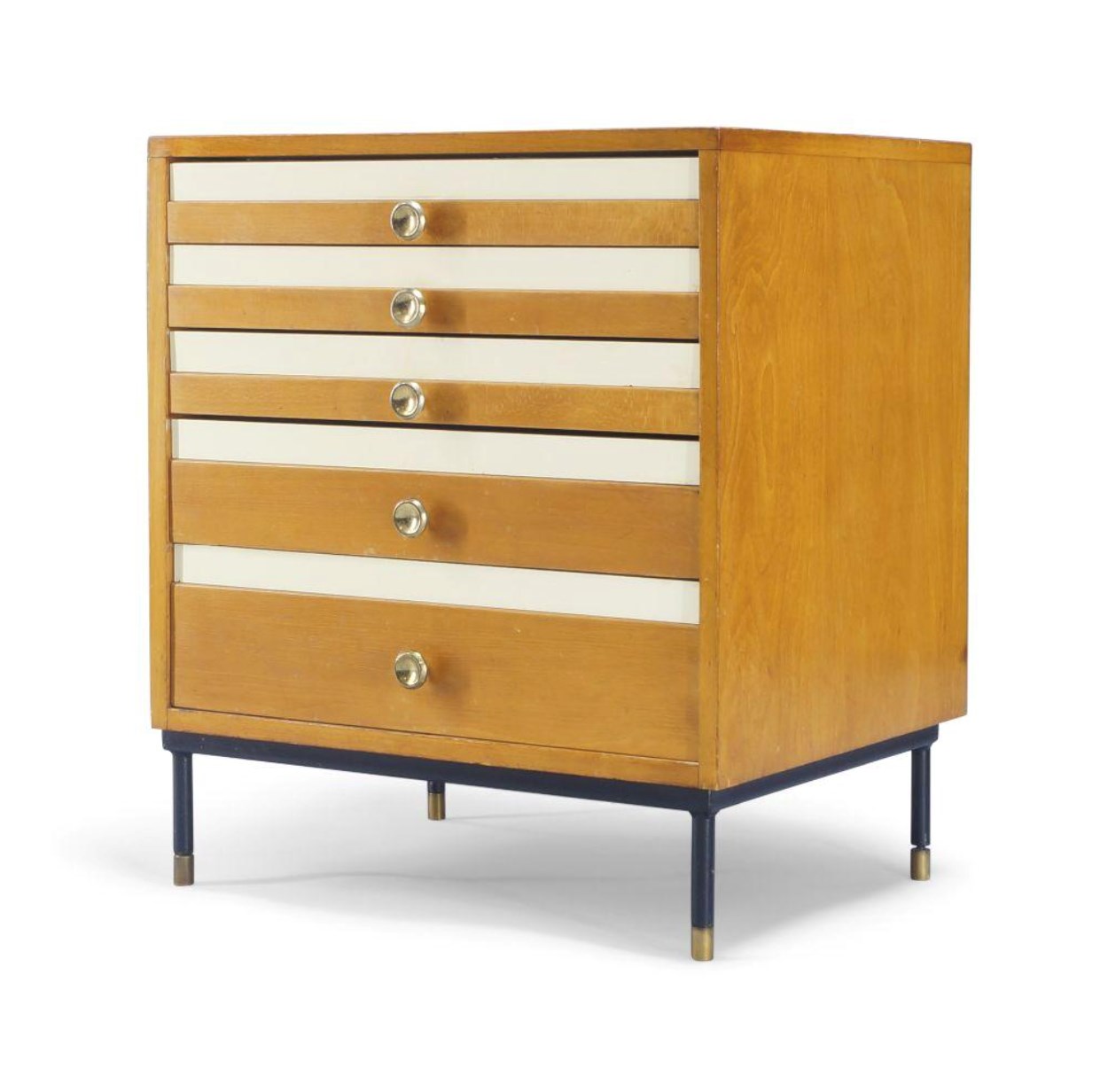 A strong hammer was achieved for this unique chest of drawers by Gio Ponti, with excellent provenance. The chest, measuring 72cm high, 61cm wide, 52cm deep, with five graduated drawers, on cylindrical black enamelled legs with brass sabots, created in 1950, came from the apartment of Ingegner Preti in Milan. The chest sold to a RoseberysLive online bidder based in Berlin for £6,250. 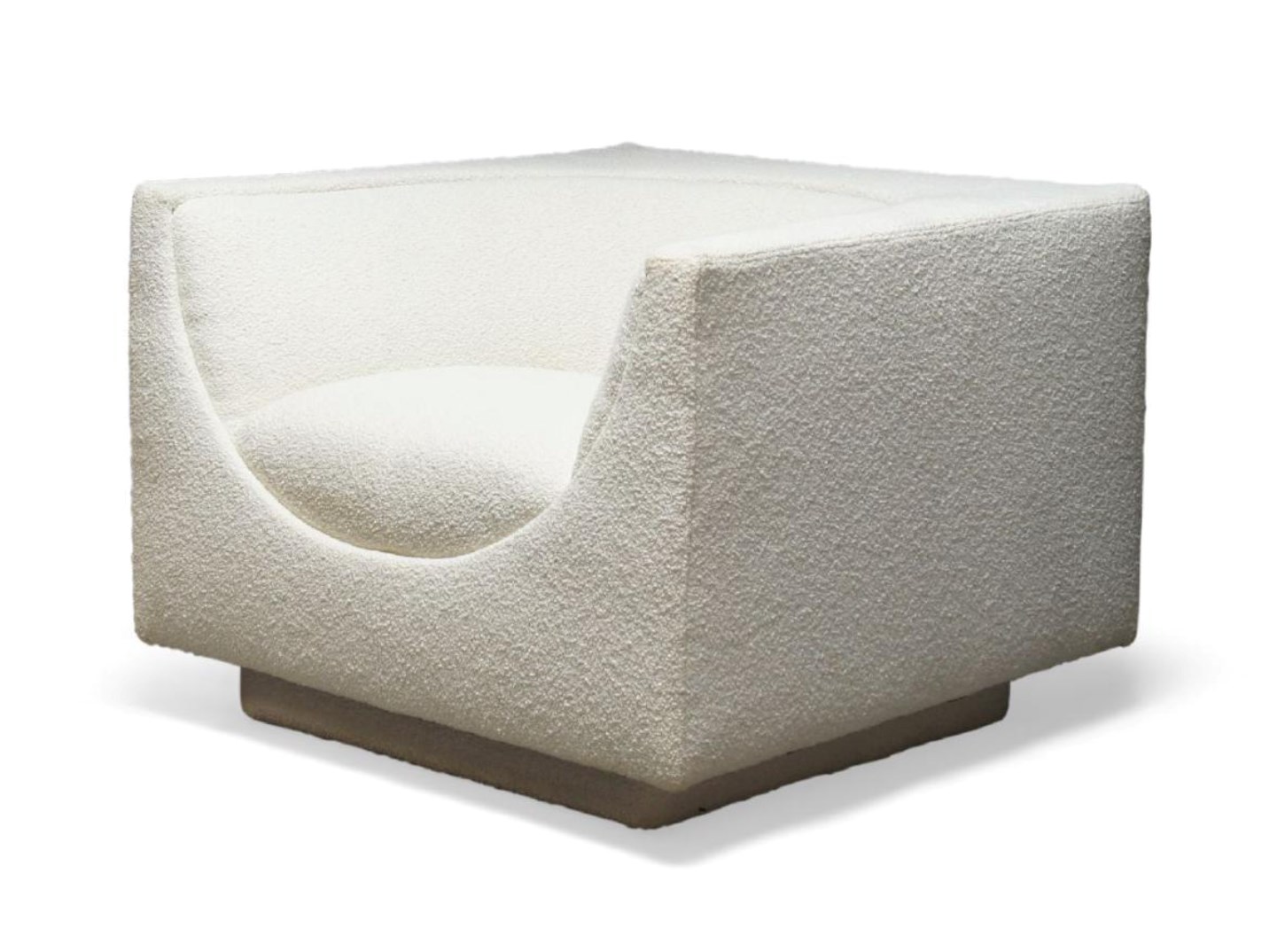 Entered onto the market with a pre-sale guided price of £3,000 - £3,500 was lot 386. The 'Cubo' lounge chair for L'Atelier Brazil was designed by Polish-Brazilian designer Jorge Zsalszupin (1922-2020) in 1970. The property of a private collection of Brazilian design of square form, with curved seat, upholstered in cream wool fabric, on square plinth base measuring 64cm high, 90cm wide made £4,500 at auction, going to a bidder in the room. Nigel Dawson-Ellis, Roseberys 20th Century furniture specialist commented ‘This scarce and stylish Brazilian design chair by Jorge Zsalszupin surpassed high estimate with strong bidding on the day’. 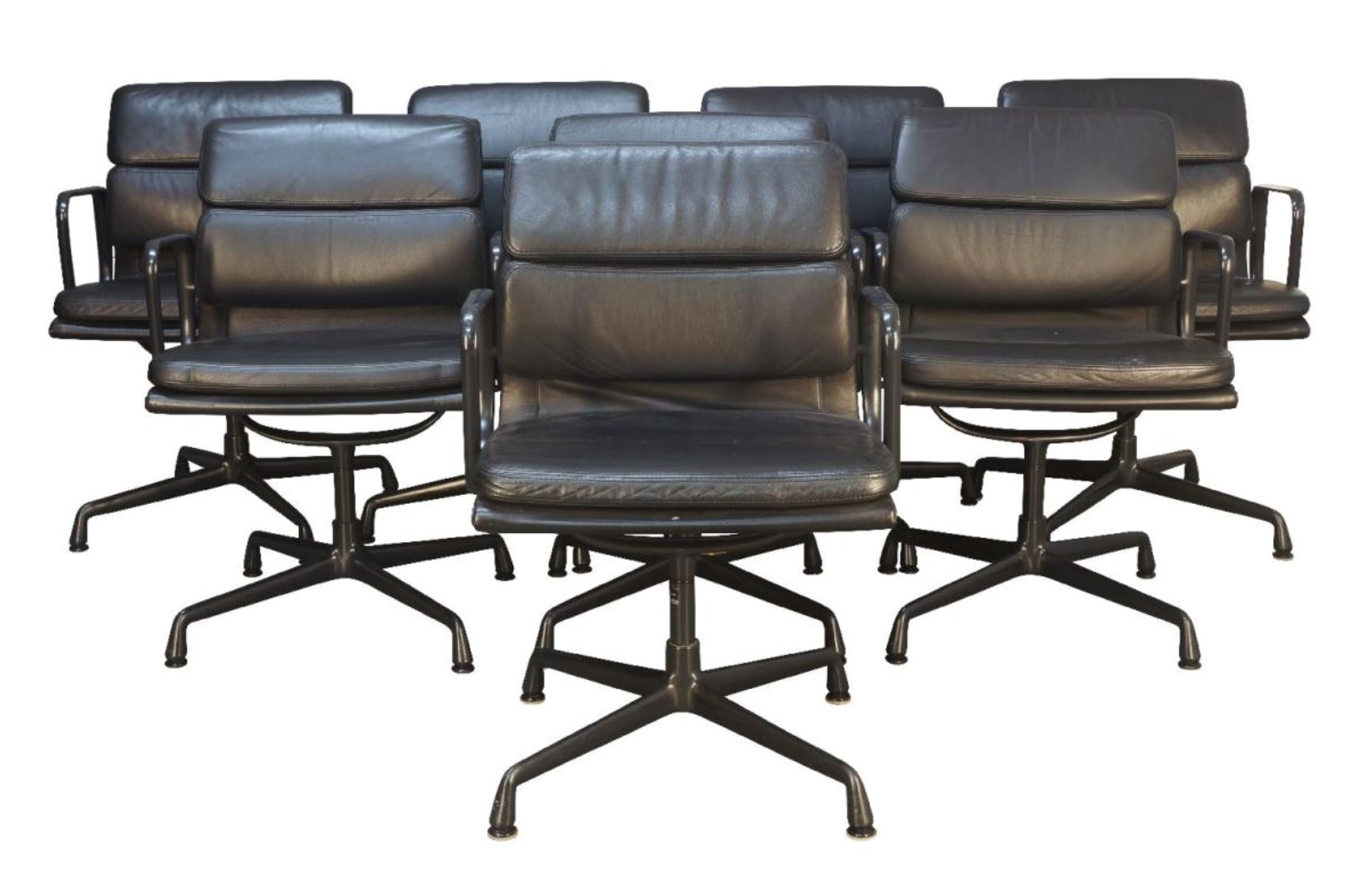 Other chairs in the sale that achieved a good result were the set of 8 model 'EA208' soft pad chairs for Vitra, c.1980s/90s, by the iconic American design duo, Charles Eames and Ray Eames. The black leather seats on black powder coated aluminium swivel bases, all had the manufacturer’s labels to underside. The group of chairs sold to a lucky UK based online bidder for £4,250, a good price for the group of 8 chairs, as 1 single new model from Vitra today costs £2,490 upward. Nigel Dawson-Ellis commented ‘Another strong result displaying the persisting appeal of designs by Charles and Ray Eames within the Design market.’ 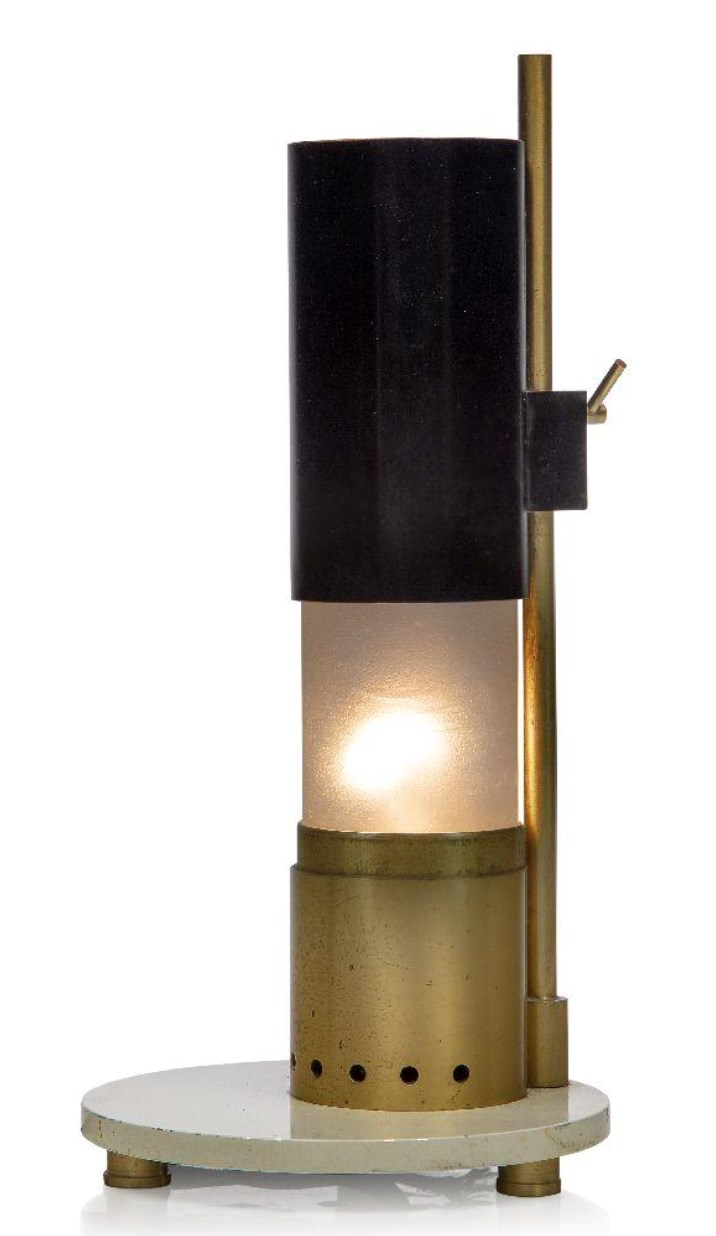 This sale had a wonderful segment of lighting on offer, with highlight sales including designs by Christian Liaigre, John & Sylvia Reid and Oscar Torlasco. The model ‘12445 Cartuccia’ table lamp for Arredoluce, c.1955, by Italian designer Angelo Lelli (1911-1979), one of Italy’s most sought after 20th Century lighting designers was the highlight from the group of lighting on offer within the sale. Of cylindrical form, the adjustable black enamelled aluminium shade, above frosted glass diffuser, on white enamelled circular base measuring 26cm high made the strong price of £2,375 during the auction, against an estimate of £1,000 - £1,500, going to a telephone bidder based in London.