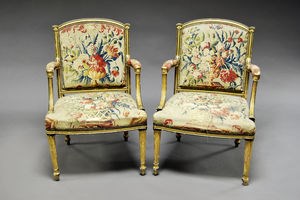 Roseberys Peter Greenway said, “This result demonstrates that with Chinese works of art great age does not necessarily determine the value of a piece. Art from the Republican period (1912-1949) is becoming highly sought after and on plaques such as these the quality and detail of the painting is all important. The top selling lot was attributed to Cheng Yeting (1895-1948), a founder member of the “Eight Friends of Zhusan”. Once demand for courtly porcelain ended, this group regularly met to discuss painting and develop a new form of artistic expression. Two other porcelain plaques attributed to Wang Yeting (1884-1942) and Zhang Zi’an achieved £14,500 and £15,000 respectively. These plaques have become hugely popular with Chinese buyers during the last six to 12 months. Fascinatingly, Roseberys has the original receipts for each of the plaques and the top selling lot was purchased from a well-known dealer in 1998 for £2,200. “
Provenance was the key to a hammer price of £44,000 for an elegant pair of George III giltwood armchairs by Thomas Chippendale. Roseberys was able to establish that they were commissioned by Sir Richard Worsley as part of a suite of giltwood furniture supplied for the drawing room at Appuldurcombe on the Isle of Wight between 1776 and 1778. The chairs retained the original Gobelins Tapestry which was very worn but they were offered in fresh to the market condition. The chairs were hotly contested by UK private and trade buyers across three telephone lines and the successful bidder was a private London buyer. 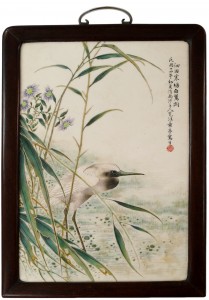 A private collection of Chinese snuff bottles achieved a combined hammer price of £55,430. The most popular were the 18th and 19th century jade ones of every shade from ‘mutton fat’ to pale green to spinach green.

Over the last 18 months snuff bottles have been achieving high prices from Chinese buyers and this has encouraged European collectors to sell. This collection was amassed by a Greek owner in the 1960s, ‘70s and ‘80s and has been in storage ever since so was completely fresh to the market.
The highest individual hammer price was £3,400 for lot 1629 (pictured below). While jewelled snuff bottles aren’t especially rare, the white colour of the jade and perfect condition proved a winning combination.

The Suzy Menkes Fashion Collection boasted a 100% sold rate. Bidding on the 67 lots belonging to the renowned journalist was fierce on the phones, in the saleroom and on the internet from both trade and private buyers. Lots included garments and accessories from designers such as Bill Gibb, Ossie Clark, Yves St Laurent and Chanel. Pictured here is Lot 868 by Ossie Clark for Radley, 1970s, which achieved a hammer price of £220.

Rather appropriately during the centenary of the outbreak of the First World War, the top selling lot in a stunning collection of historic lace was this tablecloth depicting the crests of the Allied countries at the time. It sold for a hammer price of £900.

A pair of French ormolu three branch, four light candelabra shone in the Works of Art section of the auction. Despite having been drilled to turn them into electrical devices, their age and the exceptional quality of the ormolu, along with their provenance (coming from the Church of the Annunciation in London’s Marble Arch) achieved a hammer price of £4,800.
A highlight of the paintings section was a work by the Belgian avant-garde artist Floris Jespers. This cubist style work in verre eglomise probably dates from the 1920s -1930s and benefits from a very strong composition which made it the most commercial of five works by the artist in the sale. Three of the others also featured this same oil on glass painting technique. The work, pictured below achieved a hammer price of £6,500. 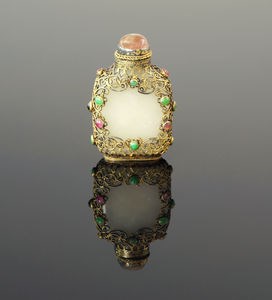 Roseberys offered five oil paintings by the British painter Dorothea Sharp, RBA ROI (1874-1955) from a private collection bought in the 1960s from Lanham Galleries, St Ives. They had remained in the same family ever since and were fresh to the market. Dorothea Sharp was elected to the St Ives Society of Artists in 1928 as an honorary member. In the late 1930s she settled there for several years, working from the Balcony Studio in St Andrews Street. She co-managed the Lanham Galleries which showcased the work of Newlyn and St Ives School painters with fellow artist Marcella Smith who became a lifelong friend.

A charming watercolour coupled with a great story gained a hammer price of £2,000 for Lot 604. The artist Patrick Procktor and his two friends, David Hockney RA and Peter Schlesinger went to France and Italy in 1967 in Hockney’s Morris Minor to undertake a modern day Grand Tour of Europe. They visited Paris, Nimes, Lucca, Viareggio, Florence and Rome. This work (pictured below) was painted by Procktor in Lucca features a figure reading on the left of the composition who is recognised to be the artist David Hockney.

The only picture frame with silver gilt in the auction was this Lely-style frame (pictured below) which was sold for £1,400. Its size, 128 x 105cm, suggests that it might have been made for a portrait by the artist or one of his followers.

A rare Pre-Raphaelite frame with original gilding also achieved a hammer price of £1,400. Pre-Raphaelite frames were influenced by the materials and construction of medieval and early renaissance frames. This one featured fine roundels to the corners and ribbon moulding to the outer edge.