The Chinese, Japanese & South East Asian department had its most outstanding year yet despite the challenges of 2020. Clients from Asian in particular China also re-emerged as a major force in the market in 2020, having returned to relative normalcy ahead of the West. Bill Forrest, Head of the department commented on the sale in May that made a staggering £1.14m ‘Undoubtedly, we were vindicated in our decision to postpone May’s sale until July, as it allowed prospective buyers to attend our viewing days by appointment, and handle objects in the flesh. This enabled us to offer some of the very finest and rarest objects from China and Southeast Asia and achieve the best possible results.’ The department to date continues to be the highest grossing for Roseberys, with the popularity of Asian antiques rising.

1. A rare pair of Chinese porcelain imperially inscribed wall vases, Qianlong marks and of the period, sold for £325,000 in the Chinese, Japanese & South East Asian Art auction on 28 July at Roseberys 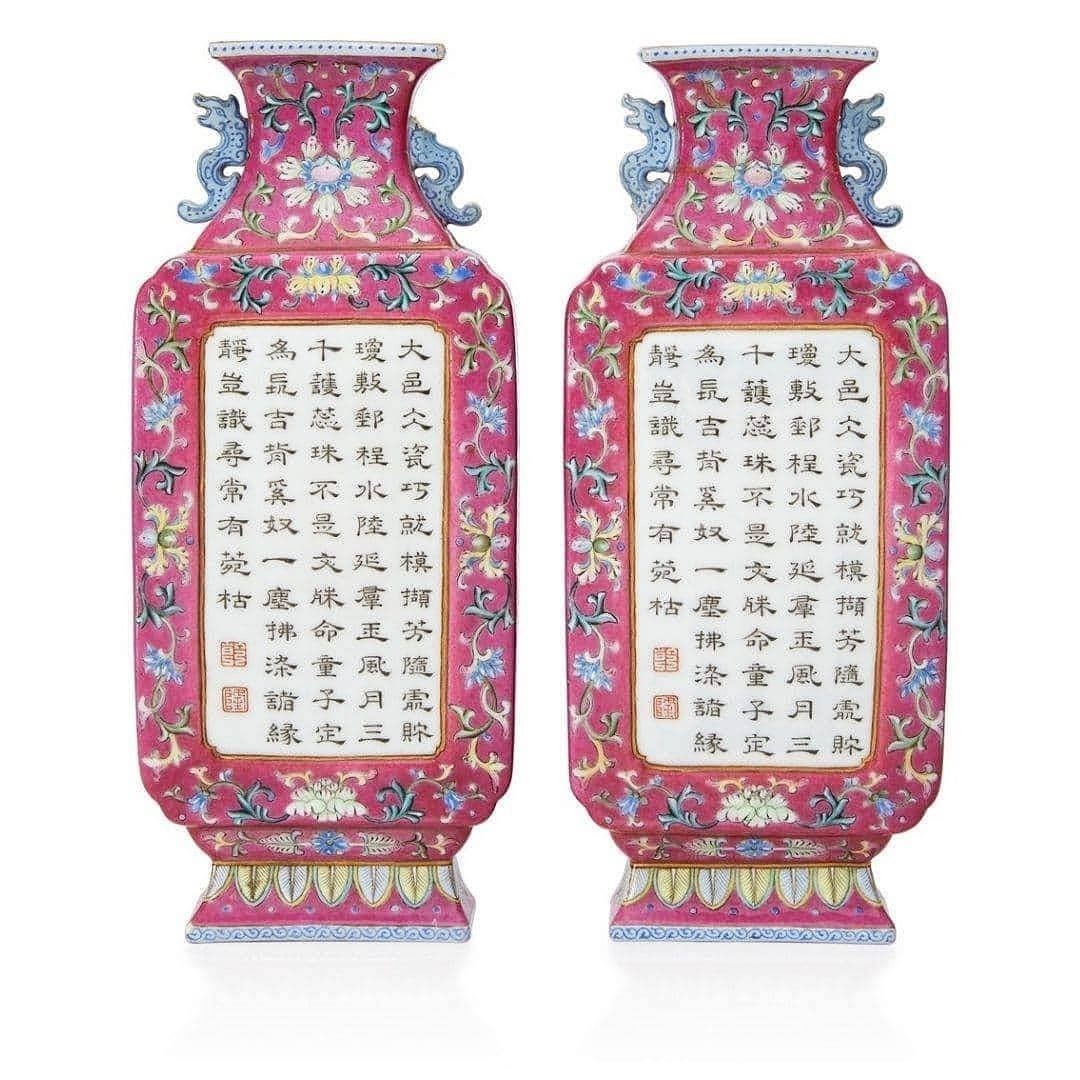 This exquisite pair of Chinese imperially inscribed wall vases realised a staggering £324,500 at Roseberys £1.14m sale of art and antiques from China, Japan and South East Asia making it the highest value lot to sell this year from all the departments. Chased by nine determined bidders including one who added £80,000 in a single bid, the pair soared above the pre-sale estimate of £20,000-30,000 in the auction held on July 28. They eventually sold to a Chinese agent in the room on behalf of a Chinese collector after 15 minutes of bidding. “The couple who consigned the vases were of course delighted when they heard the result. They were so pleased that we spotted the vases among the contents of their house as they were in the process of downsizing and disposing of most of their possessions and had never looked at them closely enough to appreciate their true worth. I was told that they had been furnishing a mantelpiece for many years and may or may not have made the cut to be moved to their new house. Like many inherited objects, one attaches a certain degree of sentimental value but may not appreciate their true value. We have been truly privileged to be custodians of these wonderful objects, and thanks to a hugely successful sale, we have found them a new home.” - Bill Forrest, Head of Chinese, Japanese & South East Asian Art auction commented. The imperially inscribed Qianlong mark and period porcelain wall vases were inherited in c.1950 and came from a private West London address. The Imperial poem inscribed on each was composed by the Emperor Qianlong apparently to express his delight in seeing a wall vase filled with a flower hanging inside of his sedan chair on the way to a hunting trip. Of the 300 or so Qianlong wall vases recorded in the collection of the Palace Museum in Beijing, only half are inscribed with poems by the emperor. Wall vases, also known as wall pockets or sedan chair vases, became one of the Qianlong Emperor’s favourite types and developed significantly during his reign. Pairs are seldom offered on the market. Enhancing their rarity further was the yangcai decoration, introduced by European Jesuit craftsmen to the Qing court around 1685. Developed in the Jingdezhen imperial workshops under the patronage of the Qianlong Emperor, it is representative of the superb quality of porcelain production achieved during the Qianlong reign. ‘It was a tremendous privilege to sell this pair of porcelain wall pockets made in the imperial kilns during the reign of Emperor Qianlong. Emperor Qianlong was arguably one of the greatest collectors of art and these vases, likely to have been commissioned by him, reflect this through their complex potting, impeccable painted decoration in enamels, and the inscription of an ancient poem.’ Bill Forrest, Head of the Chinese, Japanese & South East Asian Art Department commented. 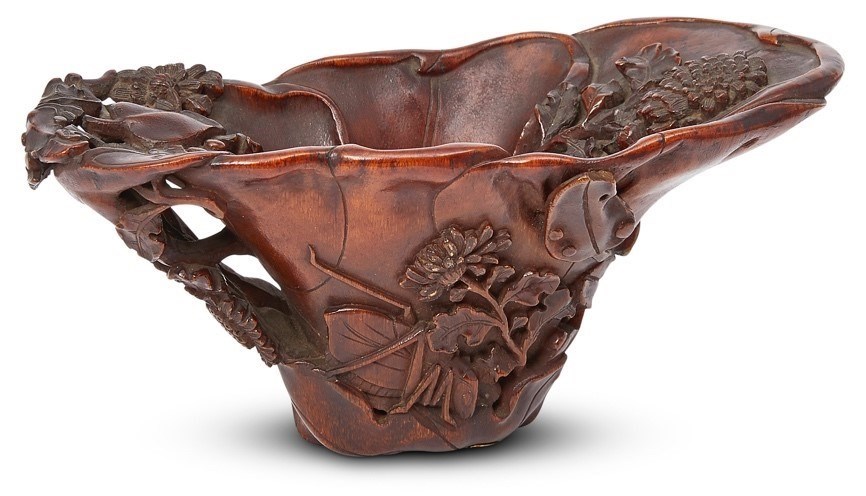 This fine 17th century Chinese rhinoceros horn libation cup carved with chrysanthemums, carried hopes of £20,000-30,000 in the July auction at Roseberys. Chrysanthemum-decorated libation cups symbolise long life and are also linked to the hermetic poet Tao Qian (365-427 AD) who planted numerous chrysanthemums at his rural estate. The flower has since come to symbolise the literati ideal of tranquil solitude in the 'autumn' of one’s life. The cup comes from a private West Country collection, inherited from the grandparents of the present owner in the 1960s, together with a 17th/18th century. The libation cup went on to make over double its estimate and sold for £75,000.

3. A Chinese porcelain monochrome blue-glazed teapot, Yongzheng mark and of the period sold for £52,500 in the Chinese, Japanese & South East Asian Art auction on 28 July at Roseberys 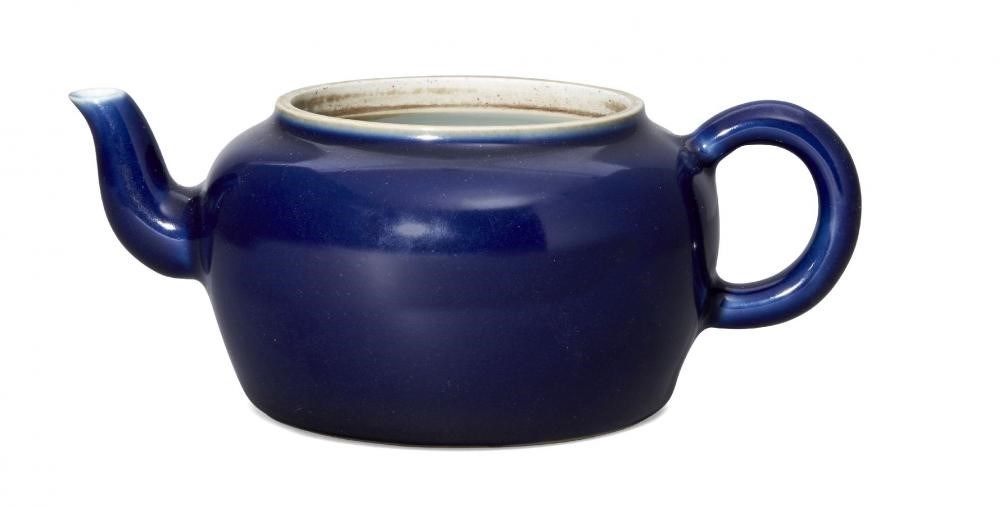 This Chinese porcelain monochrome blue-glazed teapot with a period Yongzheng mark was estimated to make £10,000 - £15,000 at auction, however it was raced away to £52,500, making it the third best-selling lot for the department. The rare teapot is covered in a thick dark blue glaze, the white glazed base inscribed with six-character mark within a double circle. 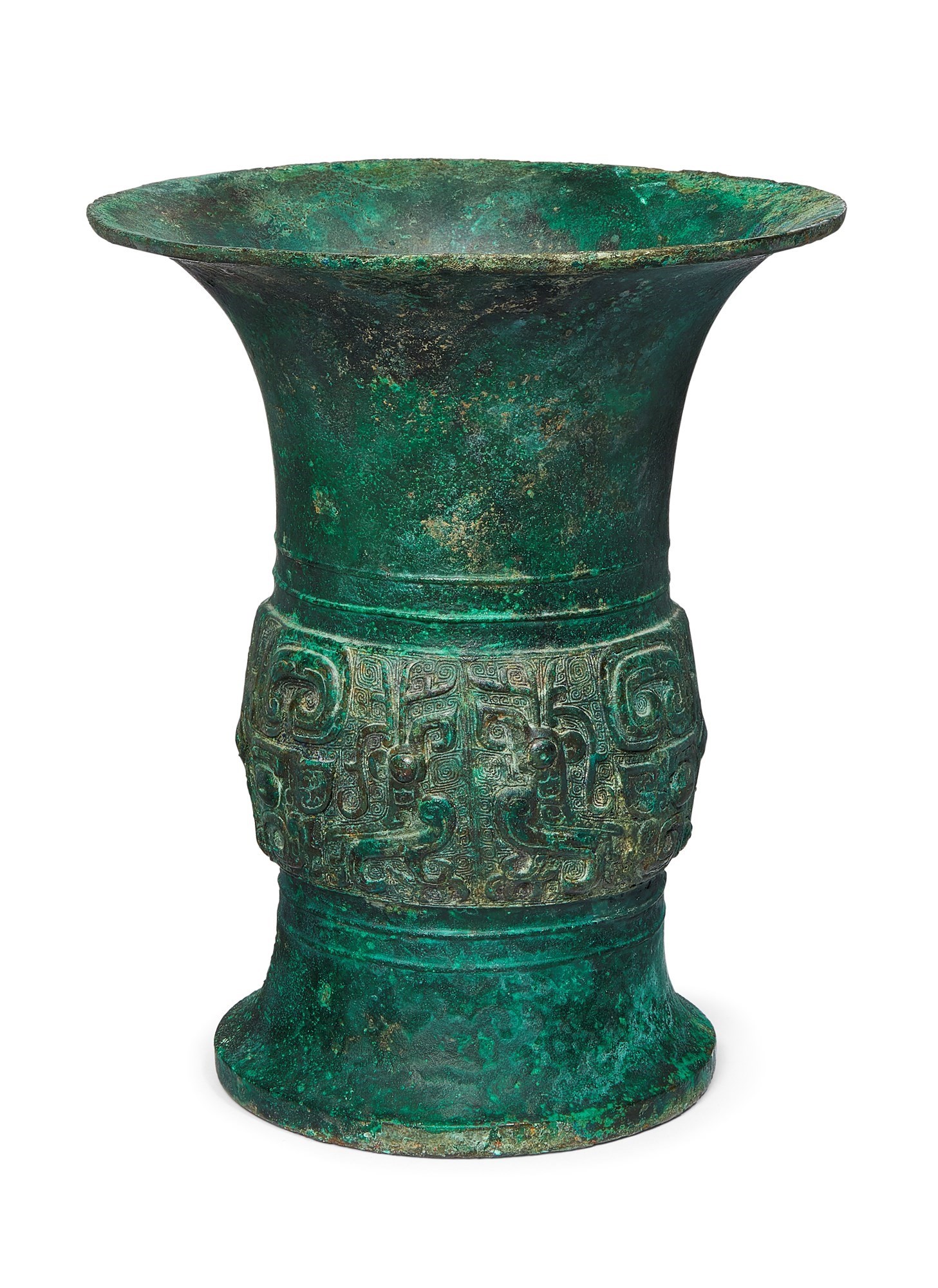 Leading the Chinese, Japanese & South East Asian Art sale in November were two rare archaic bronzes from the extensive van Daalen Collection, that made a joint sum of £102,500. Lot 52, a rare Chinese archaic ritual bronze wine vessel from the early Western Zhou dynasty with a Zun Fu Yi mark made £52,500. Distinctive for its wide mouth to facilitate the pouring of wine, the vessel that sold at Roseberys belongs to a very small group of bronzes which are decorated with two repeating ‘bowstring’ bands around its body. The body is exceptionally well-cast with a striking design of two taotie masks and is covered in an appealing malachite-green patina. A similar vessel can be found in the Shaanxi Provincial Museum.

Lot 51 a rare Chinese archaic bronze ritual food vessel from the, Yu late Shang dynasty made £50,000 at auction, making it the fifth bestselling item for the Asian department. Yu archaic bronze food vessels were popular during the late Shang dynasty in the Yinxu Period, circa 13th - 11th centuries BC. They were used for making offering of grains and vegetables in ancestral rituals, often accompanied by the tripod ding vessel used for cooking meats. The striking combination of diamond cartouches and boss decoration, as seen on the lot sold at Roseberys, appear to have been particularly admired and used on various shaped vessels in Shaanxi province during the Yinxu or Anyang period.

If you would like to consign into the next Chinese, Japanese & South East Asian Art auction, you can request a complimentary valuation by filling in this simple form

The next Chinese, Japanese & South East Asian Art auction will take place on Wednesday 19 May