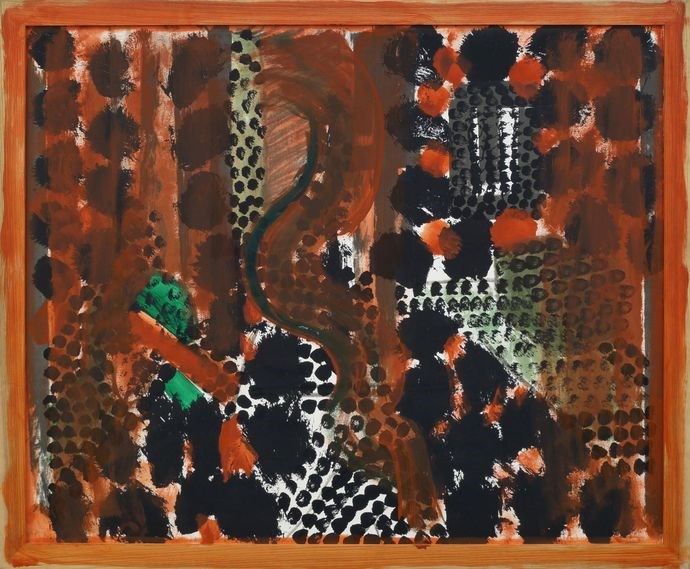 The Modern & Contemporary British Art auction, held at Roseberys London on Wednesday 24 January proved the strength of the British art market with positive sale results throughout the 252 lot sale.

Associate Specialist, Elizabeth Comba who curated the sale was delighted with the strong results across artists and movements from the St Ives School to British Surrealism and highlighted the following top lots:

(Lot 203) pictured above Painted Souvenir (1988) is a unique work by the celebrated British artist Sir Howard Hodgkin (1932-2017). Painted in oil on an artist’s proof of his screenprint Souvenir (1981), the incorporated, painted frame makes it characteristic of the artist. Souvenir is typical of Hodgkin and his aim to translate moments and placers into a pictorial language that evokes them, rather than one that records precisely their physical detail. The addition of his distinctive broad brush strokes accentuate both the emotional depth and sense of mystery, whilst the green and orange is simultaneously evocative of his fascination with India.

Bidding across all platforms settled at £18,450 to a private buyer in New York.

Lots 66 & 67, two oils by Mary Potter 1900-1981 were accompanied by wonderful provenance, both having come from the collection of the late Jennifer Vyvyan. Vyvyan was a British classical soprano who was part of Benjamin Britten’s inner circle of singers, and had a number of roles written specifically by him with her unique voice in mind including The Governess in The Turn of The Screw. Mary Potter was also a very close friend of Benjamin Britten, after moving to Aldeburgh in 1951 with her husband where they lived at the Red House. Six years later, after the break-up of her marriage, Mary swapped houses with Britten and Pears, moving to Crag House on the sea-front. 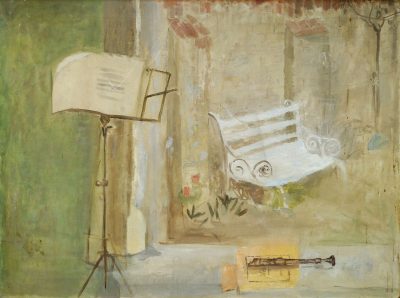 (Lot 66) Pictured left – Garden scene with a music stand and recorder; oil on canvas was a popular choice with buyers on the day, finally going to a successful bid of £12,300 to a London based dealer.

(Lot 67) – The second piece offered by Mary Potter Nocturne; oil on board, signed with initials continued the trend of popularity with the hammer closing the sale at £7,150 for a private UK based collector.

(Lot 200) – Gouache (1959), painted in red, black and white, demonstrates the impact William Scott’s close encounter with Abstract Expressionism had on his art. Scott met Mark Rothko in New York in 1953, and was the first British artist to do so. They became close friends and when Rothko came to Britain in both 1957 and 1959, he stayed with Scott’s family in their cottage in Somerset. In 1956 MOMA’s Modern Art in the United States came to Tate Britain, and in early 1959 came The New American Painting; Scott wrote of Rothko’s “daring and beautiful colour and handling”.

The gouache, originally with Victor Waddington, confirmed the buoyancy of the market with a final hammer price of £16,600 to a private collector in Dublin.

Five works by Carel Weight CH CBE RA, British 1908-1997 were offered, presenting an interesting overview of the artist’s oeuvre. All lots sold well but the highlight was (Lot 164) – Mrs Fontana (No.3), oil on board, an excellent example of the artist’s penetrating portraits. It closely relates to Mrs. Fontana reading Bernard Shaw, an oil on canvas held in the Government Art Collection, purchased from the Leicester galleries in 1947.

The connection between the portraits of Mrs Fontana tipped the bidding to £6,400 from an original estimate of £500-700.