Marcus Grey, Director of Paintings commented : Our tri-annual Old Master, 18th & 19th Century picture auction proved again to be a popular sale displaying the resilience and continued interest in this market. The prominent theme seemed to be 18th century British oil paintings, rallying notable interest in works by leading artists such as George Morland (lots 75-77), John Cordrey (lot 80), Jan Griffier the younger (lots 32-33) and two conversation pieces by 18th century British artists (lot 49 and 51) all selling for impressive prices. We also saw pleasing results for Northern European old master pictures with an interesting entry by a follower of Paul Bril (lot 4). The department was also very happy to be offering a mixed consignment of interesting frames, including carved examples from 17th and 18th centuries, something we plan to continue in future auctions.

Highlights coming from the collection of Victor Lownes III

English School, circa 1760-1780- Portrait of Sir John and Lady Hopkins with their children, and Doctor Boutflower; oil on canvas

Numerous works from the esteemed private collection of Victor Aubrey Lownes II, the former executive of Playboy Enterprises, sold well throughout the auction, achieving outstanding results. Leading the highlights of the sale from his collection was lot 51, portrait of Sir John and Lady Hopkins with their children, and Doctor Boutflower; thought to be by a highly-skilled English artist completed around 1760-1780. The subject Sir John Hopkins (d.1796) was married to Anne Simkins and together they had five children; William, Charles, Mary Ann, Amelia and Elizabeth (1755-1830). Nathaniel Boutflower was a successful doctor in London who married Ann, Sir John’s sister. Sir John was a wholesale greengrocer who imported spices from the Far East. In 1791, he was elected Lord Mayor of London. The oil on canvas, that was estimated to make £8,000 - £12,000 rose to the sum of £21,250. 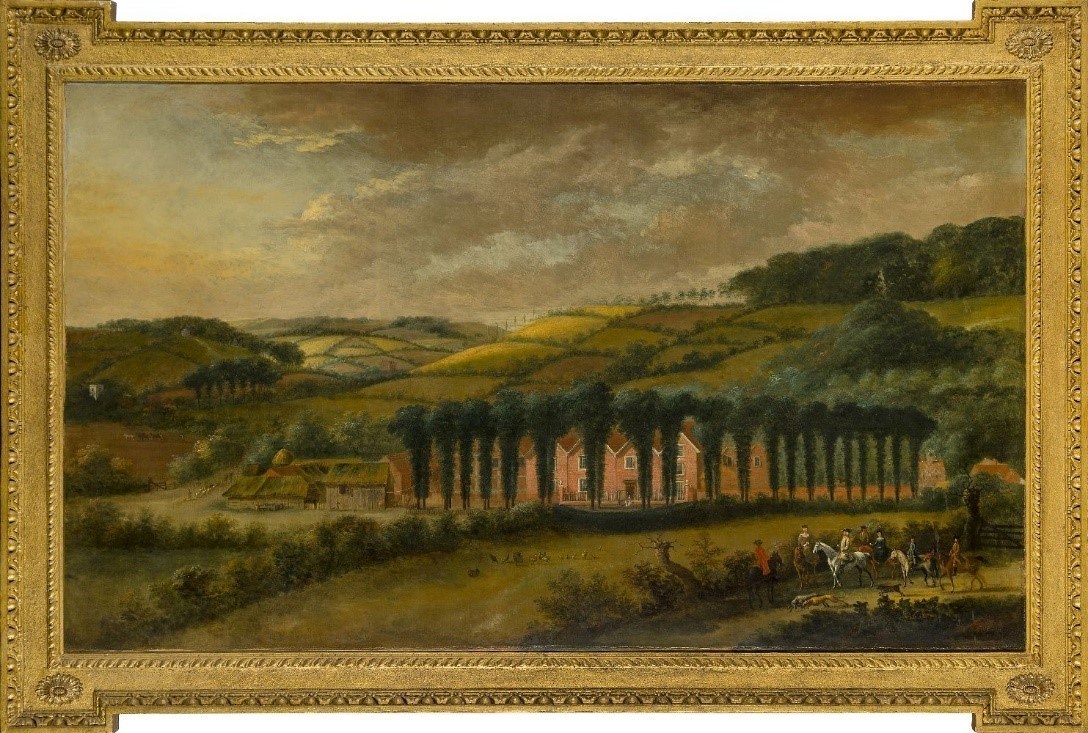 Two other lots coming from Lownes’s private collection that garnered high results were by Dutch Master Jan Griffier the Younger, 1698-1773. Lot 33, an oil on canvas, Riders with a view of a manor house, made £9,375 and lot 32, View of a manor house, made £5,500. Little is known about the mysterious Jan Griffier the Younger, but he is thought to have been baptised in Amsterdam and was active in Great Britain. He is best known for his animated paintings of animals and landscapes. Like his father, the acclaimed Jan Griffier I (c.1645-1718), Griffier the younger preferred panoramic bird’s eye view formats. This is evident in both of the works that were offered at Roseberys.

Entered into the market at £2,500 - £3,500, the oil on canvas titled Full Cry went on to make £4,750.  The work by British artist John Cordrey c.1765-1825 was bought by Victor Aubrey Lownes III from Arthur Ackermann & Son Ltd. The subject of horses are a strong theme throughout Cordreys work, as seen in the example sold at Roseberys. 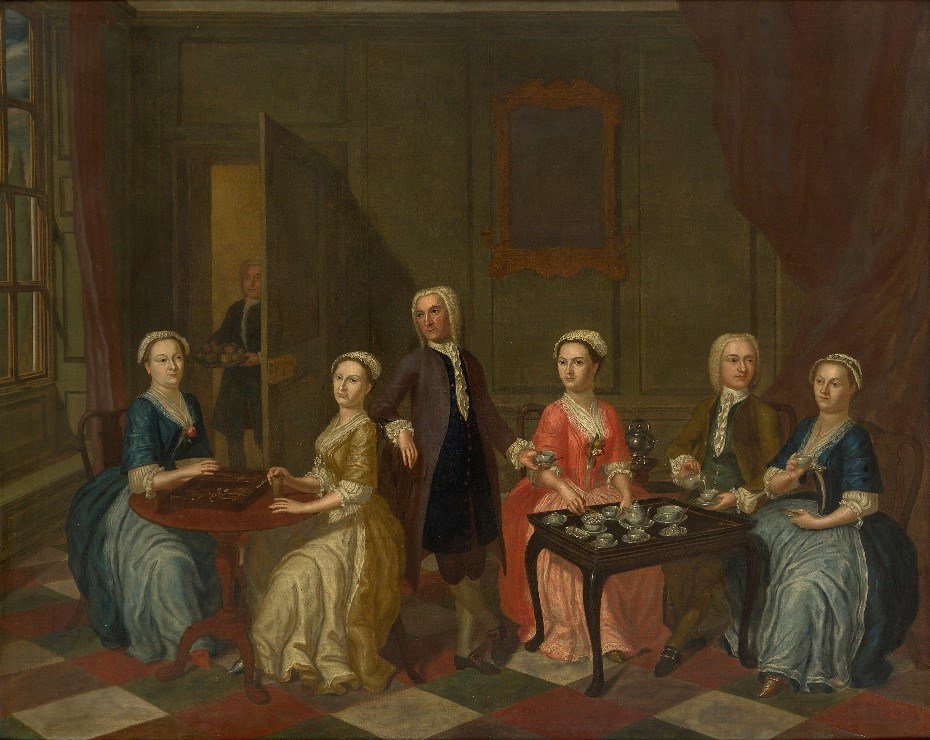 Follower of Gawen Hamilton, Scottish 1698-1737- A conversation piece with elegant figures playing backgammon and taking tea in an interior; oil on canvas

Rounding up the highlights from the private collection was a conversation piece by a follower of Scottish artist Gawen Hamilton, 1698-1737. Estimated to make £3,000 - £4,000, the elegant painting went on to make £4,500. The conversation piece is a type of portrait painting that became fashionable in England during the late 1720s and early 1730s. The painting sold at Roseberys is typical for this genre, with an elegant group of full-length figures seated in a Georgian interior, engaged in conversation, playing backgammon and taking tea. The glistening and meticulously detailed tea set is a focal point of the painting and was used to indicate the family’s social status, as tea was a luxury commodity and the tea equipage expensive, but it also emphasized the sitter’s polite status. Taking tea was the most popular subject for conversation pieces initially, but from about 1730 other social activities, such as card-playing and backgammon, were depicted alongside tea-drinking, proving that the work offered in the Old Master auction to be a fine example of the genre.

Estimated to make £8,000 - £12,000, lot 136 by British artist Sidney Richard Percy 1821-1886 went on to realise a price of £13,750. Titled A Bright Day at Ullswater; the oil on canvas came with a provenance from Christie's, London. The artist Sidney Richard Percy was a successful British landscape painter of the nineteenth century. Percy was a member of the Williams family of painters, which included other famous artists such as George Morland and James Ward RA. Within this family, Percy was also categorised as being part of the Barnes school of painters, alongside George Augustus Williams and Henry John Boddington. This piece sold at Roseberys, as a large-scale pastoral scene of Ullswater, the second largest lake in the English Lake District, is a typical example of the work for which Percy was most successful and well-known. The striking clarity and grandeur of the landscape depicted by the artist in this piece demonstrates the style which made Percy so popular with contemporaries and subsequent generations. It is for this reason that Percy’s artworks are extremely popular and currently held in the Royal Collection, the Metropolitan Museum of Art in New York, the Tate in London, and the National Museum of Wales in Cardiff. 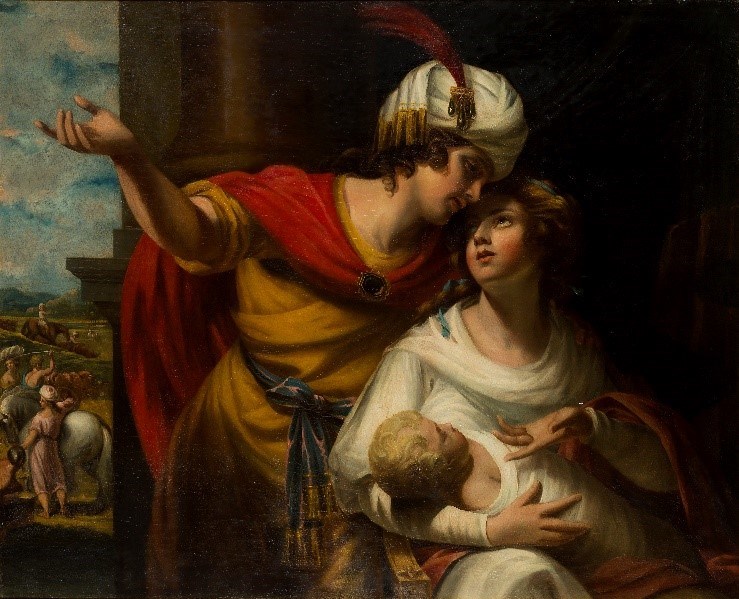 Studio of George Romney, British 1734-1802- The Departure for Canaan: Jacob and Rachel with the infant Joseph; oil on canvas

Lot 48, Studio of George Romney, The Departure for Canaan: Jacob and Rachel with the infant Joseph, went on to sell for over top estimate, realising £6,875. The British artist George Romney 1734-1802 was an English portrait painter. He was the most fashionable artist of his day, painting many leading society figures – including his artistic muse, Emma Hamilton, mistress of Lord Nelson. The oil on canvas sold at Roseberys had been previously bought at Sotheby’s, London, in November 1992. Elsewhere in the sale, lot 86, an oil on canvas by Sir Augustus Wall Callcott RA, 1779-1884, titled A view of Dordrecht at Sunset, c.1830-40; made £4,000. This is a classic scene from the British landscape painter Callcott who studied under the famous colourist artist John Hoppner. Callcott was closely associated with the Royal Academy, becoming a full Academician in 1810, and was appointed as a Surveyor of the Queen’s Pictures in 1843. This scene is a typical example of Callcott’s work, clearly echoing the works of Dutch masters, like Jan van Goyen and Albert Cuyp, alongside his contemporary and friend J.M.W. Turner. One particularly interesting aspect of this painting is its very early representation of a paddle steamer, which only came into use in the first decades of the nineteenth century. 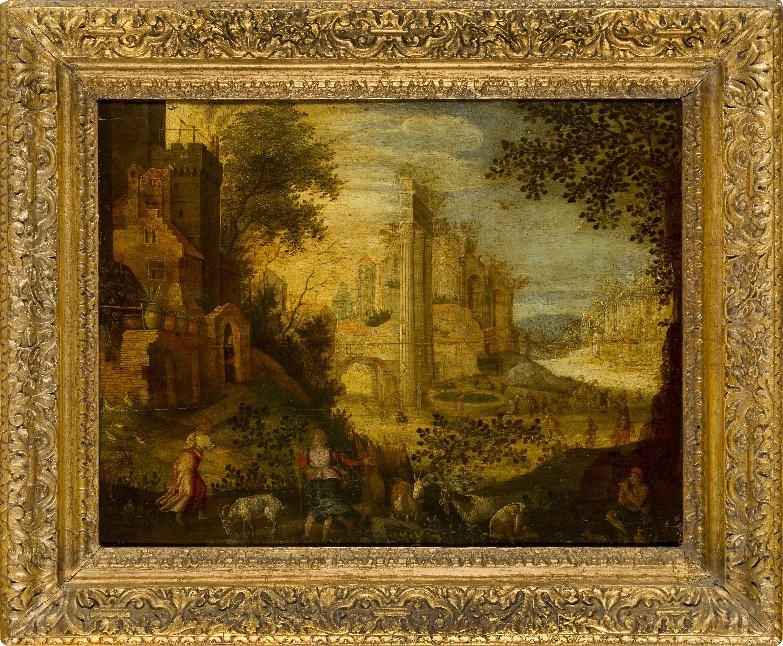 Thought to be by a Flemish follower of Paul Bril (c.1553/4-1626) is Lot 4 that was is estimated to make £1,500- £2,500, eventually selling to the successful bidder for £3,150. Paul Bril was a Flemish painter and printmaker principally known for his landscapes, spending most of his active career in Rome. His Italianate landscapes had a major influence on landscape painting in Italy and Northern Europe. A very similar version of the present oil on panel painting by Paul Bril is held by the Gemäldegalerie Alte Meister, Dresden, Germany. It is likely that the painting on offer was executed during a period when numerous Dutch and Flemish artists based themselves in Italy; creating a genre of art that amalgamates the Northern European and Italian styles. These artists were known as 'The Bentvueghels', a society mostly active in Rome from 1620-1720. Lot 10 by Dutch artist, Rembrandt van Rijn, Dutch 1606-1669 Bust of a Man wearing a high cap, generated lots of interest throughout the auction due to its rarity.  The etching possibly portraying the artist's father is considered to be the third state due to the accidental scratch across the ear and the evening out of the edges which only appears after the first state, it also appears to have been printed before the posthumous retouching. Due to there not being many examples of these states available on the market, this rare etching sold for £2,125. 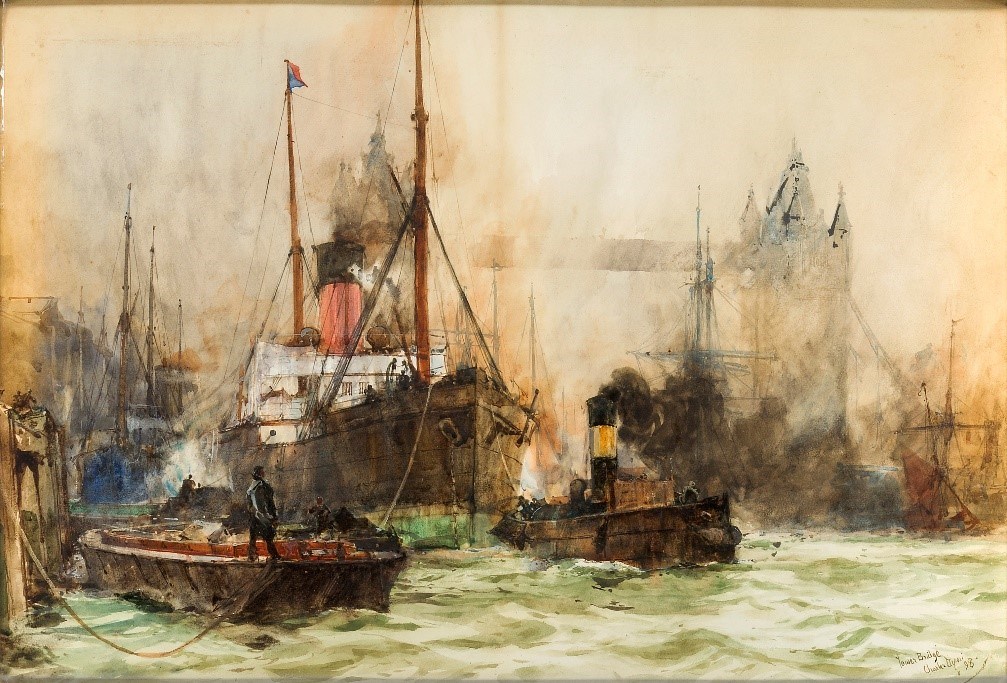 Estimated to sell for £600 - £800, lot 182 a watercolour by British artist Charles Edward Dixon RI, 1872-1934, titled Tower Bridge; realised a price of £1,625. Charles Edward Dixon was best known as a painter of river, coastal and marine scenes, especially on the Thames in watercolour, evident in the work sold at Roseberys. Dixon was a keen yachtsman and lived at Itchenor on the Sussex coast. He was the son of the genre and historical painter, Alfred Dixon.

If you would like to know any more information about the past or present sale please contact pictures@roseberys.co.uk