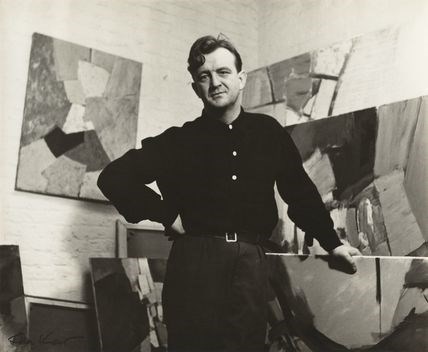 Image of Adrian Heath via www.godsonandcoles.co.uk

Adrian Heath was a seminal 20th-century British constructivist, collagist and abstract painter. Heath was also a leading fixture in the London art world, an inspiring teacher and a voice of public support for contemporary British art at a time when the commercial side was still struggling to catch up after the War.

Here we get to know Adrian Heath better, an artist that is a prominent feature within Roseberys Modern & Contemporary British Art auctions. 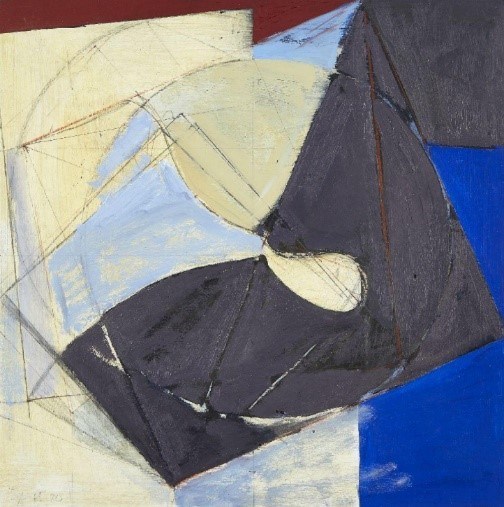 Adrian Heath was born in Matmyo, Burma, 23 June 1920. Arriving in England at the age of five, Heath was surrounded by art from a young age when he moved into a country house filled with paintings and engravings by Gainsborough, Romney and Leighton amongst others. He studied painting in Cornwall before enrolling at Slade School of Art, where he studied under William Coldstream. In 1938, as a pupil of Stanhope Forbes, he began producing elegant Academy-style nudes. War service would interrupt his course, which he would go on to complete in 1947.

During World War II he served in the RAF as a tail gunner in Lancaster bombers, but spent almost the entire war as a prisoner of war at Stalag 383. After trying to escape, he was placed in solitary confinement. During his confinement he started working in abstract forms. During his time as a prisoner of war, he met fellow detainee Terry Frost (1915-2003) and taught Frost to paint. The war years, despite being harrowing were pivotal in the development of Heath’s of abstract art practice, which he would go on to prefer over realism art.

Heath commented to the Stalag Newspaper when asked what spiritual lesson captivity had taught him, "To observe at first-hand how people of any background, education, temperament, intelligence and ability can respond to art and benefit from doing it and talking about it". 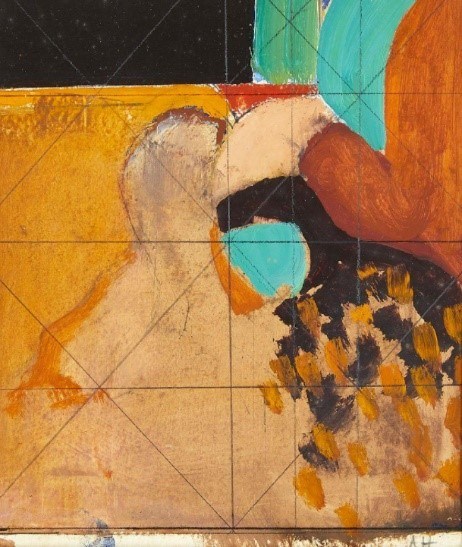 Work by Adrian Heath, British 1920-1992- Abstract composition in orange, red and green; gouache with an estimate £700- £900 coming up in the Roseberys Modern & Contemporary British Art auction on Tuesday 23 February 2021

After the war had ended, Heath returned to the Slade to complete his studies, under Randolph Schwabe.. During the war he discovered Emmons’ book on Sickert and subsequent study at the Slade School of Fine Art (19401947) inspired him to depict scenes of modern life. After he completed his studies he then moved to France, where he spent time in Paris, and a year in Carcassone. Heath's first solo exhibition of Impressionist-inspired landscapes, portraits and still-lifes was held at the Museé Carcassone, France in 1948. Throughout his career his time spent in Cornwall, London and Paris would shape and inspire his work, especially combining the romantic abstraction of St.Ives and classical abstraction of London. He was also inspired by the many other countries that he travelled to around the world. Quoted in his obituary in the Independent ‘Although London and its art world always seemed to be Adrian Heath's natural base, he enjoyed travel, particularly in France, Spain and Morocco. He once wrote that he preferred 'looking at the barren landscape of the Hebrides or Spain to the countryside of Southern England' - and he disappeared for long working periods to a cottage in a remote part of Scotland.’ 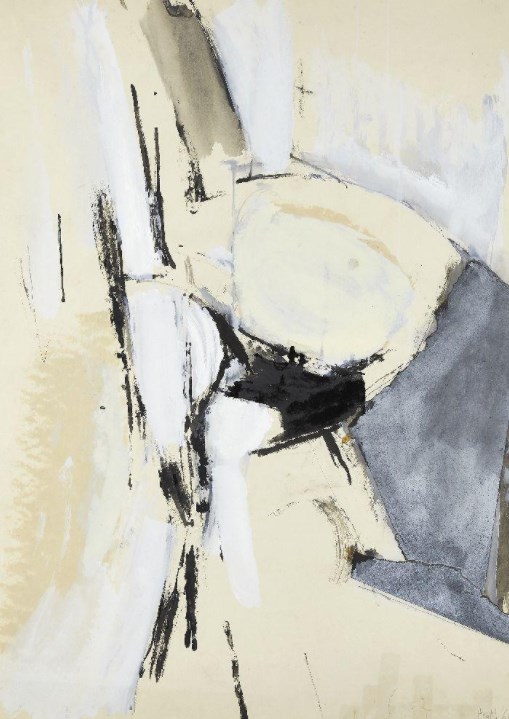 Work by Adrian Heath, British 1920-1992- Untitled, 1960; gouache and ink with an estimate £800- £1,200 coming up in the Roseberys Modern & Contemporary British Art auction on Tuesday 23 February 2021
Having visited St Ives in 1949, and making friends with fellow artists Ben Nicholson and William Scott, among others, Heath was able to create even more of a link between the St Ives School and the Constructivist movement back in London, as practised by Victor Pasmore and Kenneth and Mary Martin. This wider exposure to modern paintings, and the friendship with Victor Pasmore, caused his style to develop and become more abstract and geometric in style during the early 1950s. Heath played an important role in promoting abstract art in Britain during the 1950s also. The immensely active member of the avant-garde group of artists aim was to lift English art from the deep insularity brought about by the second world war. 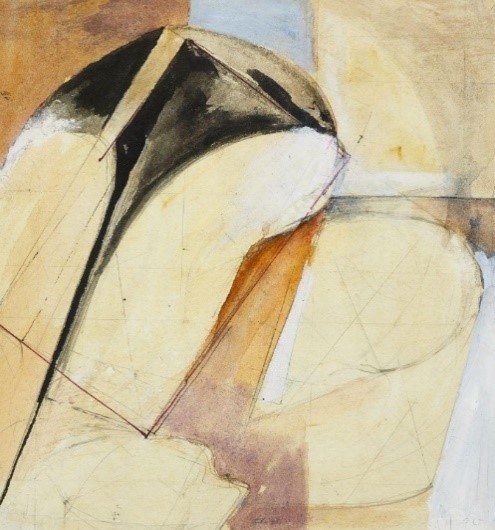 His studio at Fitzroy Street became a meeting place for artists, as well as an exhibition space. In 1955, he helped organise the first exhibition of post-war British abstract art, held at the AIA Gallery, London. Interested in art theory during this decade, he wrote a short popular manifesto-like text entitled Abstract Art: Its Origins and Meaning, which was published in 1953, the same year as his first London show, which was staged at the Redfern Gallery. This book begins with the statement: “There seems to be little understanding of the values of abstract painting and consequently no general appreciation of its qualities.”

By the mid-'50s, Heath started to use curved forms. He also became an influential figure in the Constructive art movement and established his position as one of the leading painters of his generation, both in the UK and abroad. 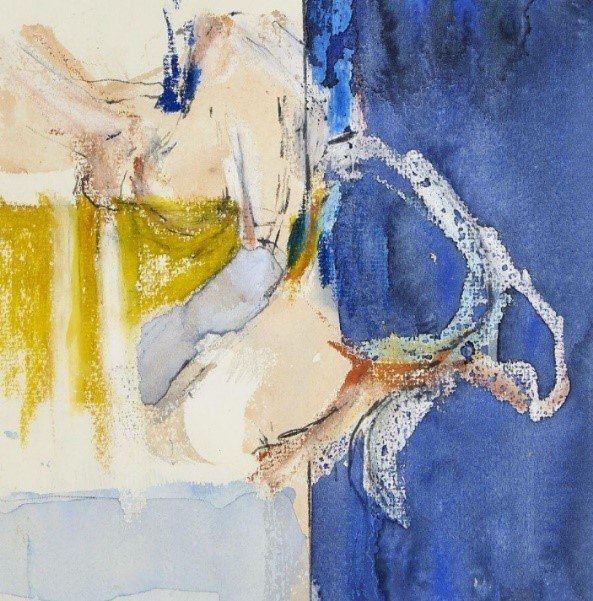 Work by Adrian Heath, British 1930-1992- Abstract composition in blue and yellow; watercolour, 19.5x19cm, (ARR) Provenance: Acquired from the estate of the artist with an estimate £800- £1,200 coming up in the Roseberys Modern & Contemporary British Art auction on Tuesday 23 February 2021

By the 1960s, Heaths style of abstract painting had adapted. His compositions were looser with expressive brush strokes of oil and executed on large-scale canvases. Between the 1960s and ‘80s, Heath’s work was selected for inclusion in important shows including British Art Today, which toured the USA in 1962; the Royal Academy's survey of British painting from 1952-77; and the Tate's first large-scale survey show of St Ives 1939-64, in 1985. 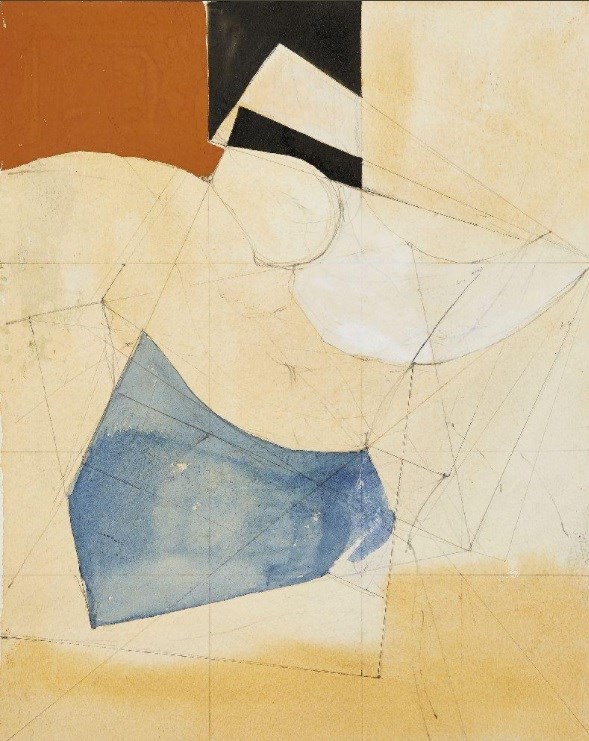 Work by Adrian Heath, British 1920-1992- Untitled in orange, red and green; gouache, squared, signed with initials in pencil with an estimate £700 - 900 coming up in the Roseberys Modern & Contemporary British Art auction on Tuesday 23 February 2021

A dedicated teacher, Heath taught at the Bath Academy of Art from 1955 to1957 and at the University of Reading from 1980 to 1985. He was Chairman of the Artists’ International Association between 1955 and 1964 and sat on the panel of the Arts Council from 1964 to 1967. Heath was an enthusiastic and highly intelligent teacher. He was delighted always to find beneficial facilities or extra funds for students from bursaries, prizes or grants - or, quite frequently, supplied funds privately. 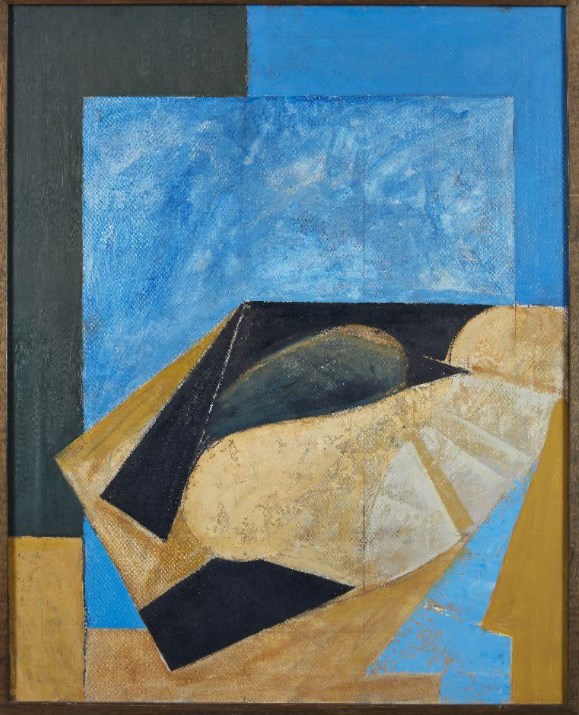 Heath was a member of 56 Group Wales from 1978 to 1982, an artists' organisation founded in Wales in 1956, with the aim of promoting Welsh Modernist art and artists.

He continued to paint into his seventies and his last exhibition, a retrospective to commemorate his 70th birthday was a combined effort by Austin/Desmond and the Redfern Gallery. Adrian Heath died in Montmiral, France, 15 Sept. 1992.

Today his work is included in many public collections and museums including the Tate Collection; Victoria and Albert Museum, London; Whitworth Gallery, Manchester; and the Hirschhorn Museum, Washington.

Find out more about the Modern & Contemporary British Art Department