On Thursday 18th November, Roseberys were thrilled to present the Fine & Decorative auction, which included The Geoffrey and Fay Elliott Collection, The Property of a Gentleman from a Covent Garden apartment and The Gordon Watson Collection. Following on from this day sale, incorporating several private collections, was the second part of the Fine & Decorative auction which took place on Friday 19th November. This auction included an impressive collection of Viennese cabinet plates, lots 612-640, and a collection of Viennese cold-painted bronzes, lots 695-702.

Head of sale, Anna Evans commented: ‘We were delighted to offer part of the Geoffrey and Fay Elliot collection.  It appropriately showcased their illustrious and adventurous lives, and we look forward to offering part II of the collection in 2022. The Property of a Gentleman from a Covent Garden apartment was also another highlight within the sale. This eclectic collection of interior furnishings and paintings appealed to bidders both from the UK and internationally, competing to buy a piece of the stylish apartment located in Covent Garden.  Top lots included the Japanese Meiji goose jardiniere (lot 135), Céline Lepage, Femme de Marrakech (lot 185), and William Frederick Witherington RA, British 1785-1865, Male nude (lot 246). Further highlights from the sale included the collection of Viennese cabinet plates which were 100% sold and many exceeding their top estimates; a group of ethnographical items and the collection of wine which attracted bidding from French collectors as well as UK-based buyers.’ 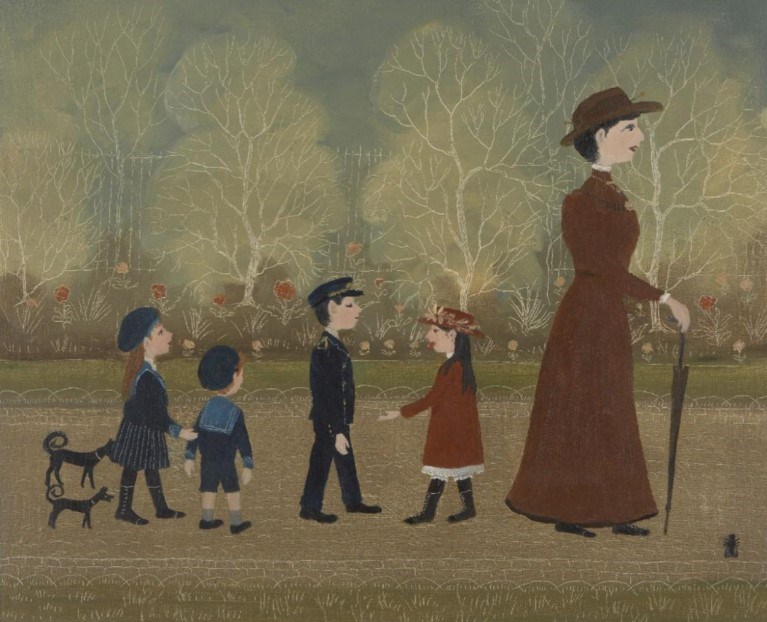 Leading the two-day sale, from The Geoffrey and Fay Elliot collection was lot 5, an oil on canvas board by British artist Helen Bradley MBE, 1900–1979 - ‘Look at our Willie's new clothes’. In the 1960s, Bradley met L.S. Lowry, who inspired her to pursue her dream of painting professionally, even though the artist was in her 60s at the time. Bradley quickly found international success, painting her childhood memories in a naïve style, appearing on television and illustrating a series of novels in the 1970s, starting with 'And Miss Carter Wore Pink: Scenes from an Edwardian Childhood,' which became bestsellers around the world. This charming painting sold for £17,500 to an online RoseberysLive bidder based in the UK. 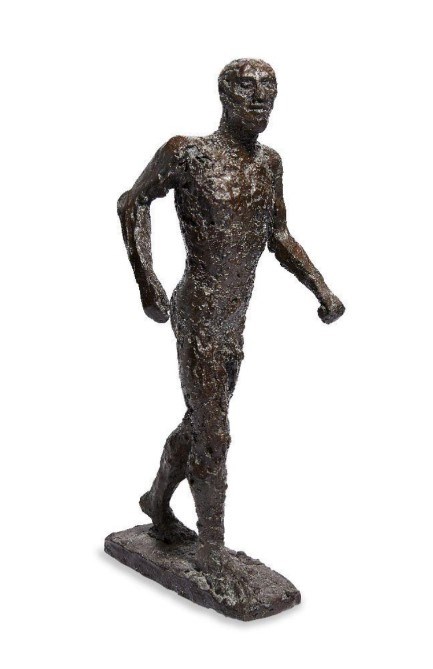 Another highlight to come from the The Geoffrey and Fay Elliot collection was lot 13, Dame Elisabeth Frink CH DBE RA, British 1930–1993, Walking Man, 1989; bronze, signed and numbered on base. The bronze had one phone bidder and two internet bidders battling for the work, with one of the internet bidders eventually winning out with the price of £30,000.

Anna Evans commented on the highlights: ‘We were delighted with the sale of the Frink and Bradley, both of which sold for their mid-estimate. These two works demonstrate how well-priced works, fresh to the market, continue to get good results.’ 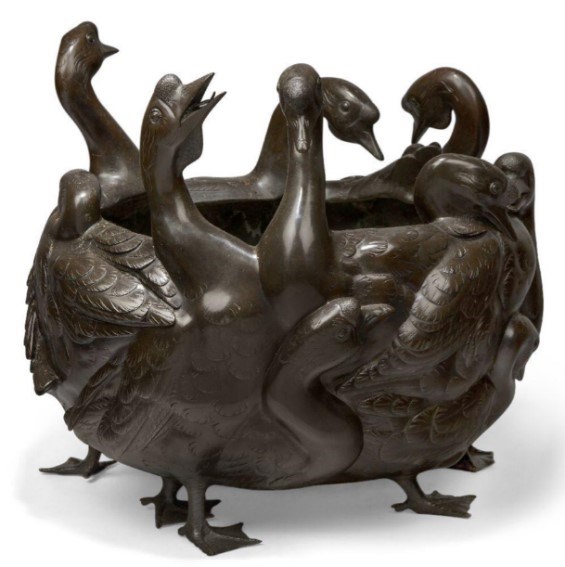 (Lot 135) This unusually large jardiniere cast with geese attracted lots of pre-sale interest, which fed through into competitive bidding from the trade and collectors. The large bronze Japanese jardiniere, Meiji Period (late 19th-early 20th century) made £9,500, against an estimate of £2,500-£4,000 to a London-based phone bidder. 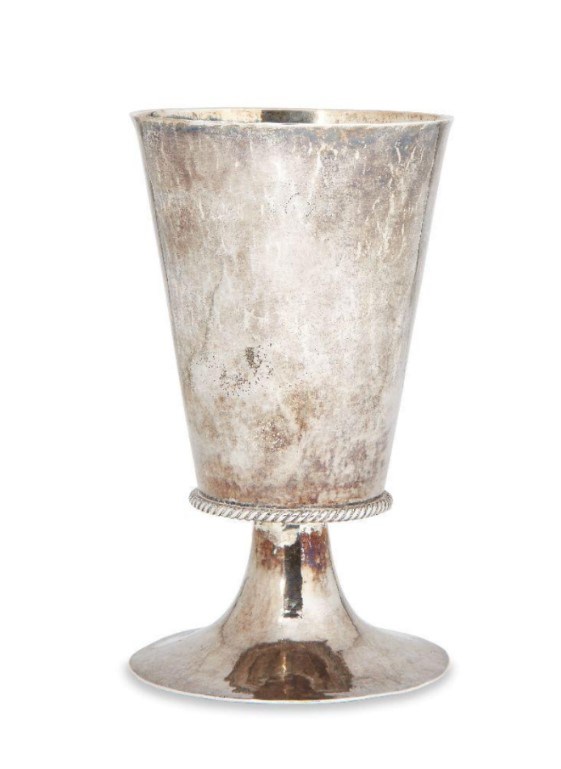 Against an estimate of £1,200-£1,800, lot 539, a Charles II silver wine goblet, London, c.1661, realised the price of £8,750, to a London dealer who bid via the phone. This was a lovely 17th century example in excellent condition commensurate with its age. Made in the year of Charles II’s coronation, its design reflected the simple Puritan style that was dominant in pre-restoration England.  There was competitive bidding across several internet platforms and multiple phone lines for this lot. 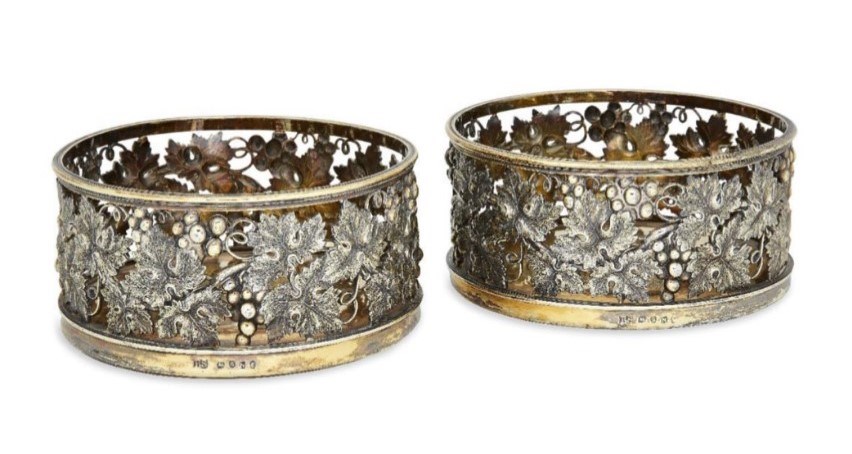 Another highlight silver lot on offer was lot 547, a pair of George III silver gilt wine coasters, London, c.1808, Benjamin Smith. These impressive coasters were a lovely example of the work of 19th century silversmith, Benjamin Smith II, who worked closely with the renowned silver maker, Paul Storr. The elaborate design recalled that of the Jamaica Service, which was presented to the future King William IV and now forms part of the Royal Collection. The engraving of the coat of arms was in good condition, and the interesting history of the characterful Edmund Lechmere-Charlton, to whom the coasters are believed to have belonged, may have further added to their appeal. Entered onto the market with a pre-sale guided price of £2,000-£4,000, the pair of wine coasters made £7,250, also selling to a London-based phone bidder. 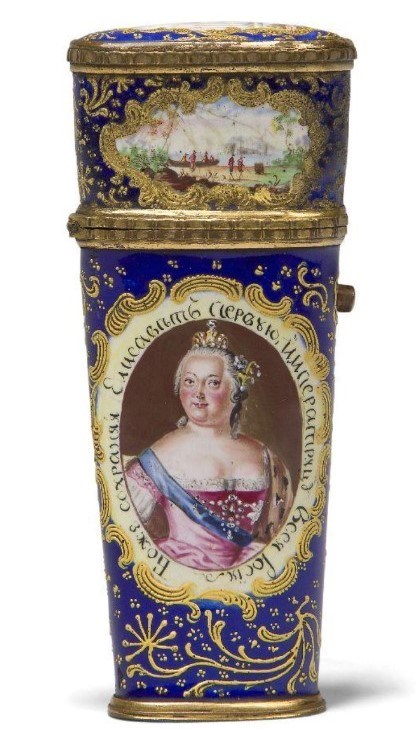 (Lot 671) Selling at the top estimate this rare mid-18th century etui was under-bid by a Russian collector before the hammer fell to an English connoisseur of enamel work who bid via the phone, realising the price of £5,000. The mid-18th century etui is painted with a portrait of Empress Elizabeth Petrovna within gilt scrolls, the lid with a riverside view, the reverse with military trophies, on blue ground, the incomplete interior with three gilt and one ivory implement, measuring 9.5cm high. 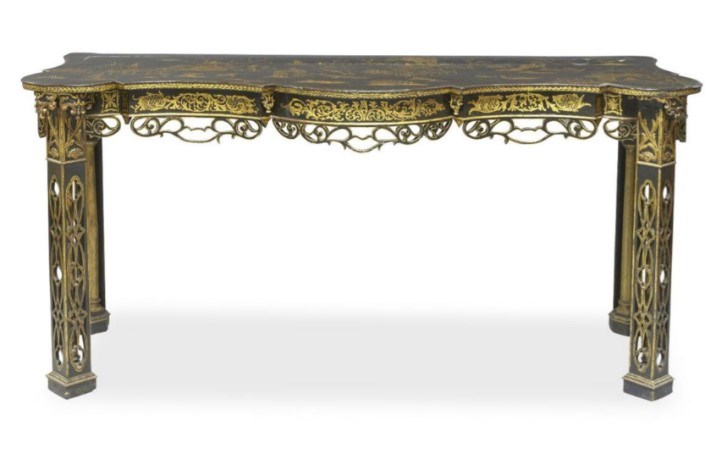 A George III black and gilt Japanned side table, in the Chippendale Chinoiserie style

Lot 784, a George III black and gilt Japanned side table, in the Chippendale Chinoiserie style, possibly of Irish manufacture was a highlight item of furniture that sold. The side table came with an interesting provenance to Sir James Horlick, 4th Bt. (1886-1972), Achamore House, Isle of Gigha, Scotland and more recently sold by Mallett, London to Hugh and Marion Sassoon. This eye-catching table was sold to a private buyer based in London via the phone for £5,000. 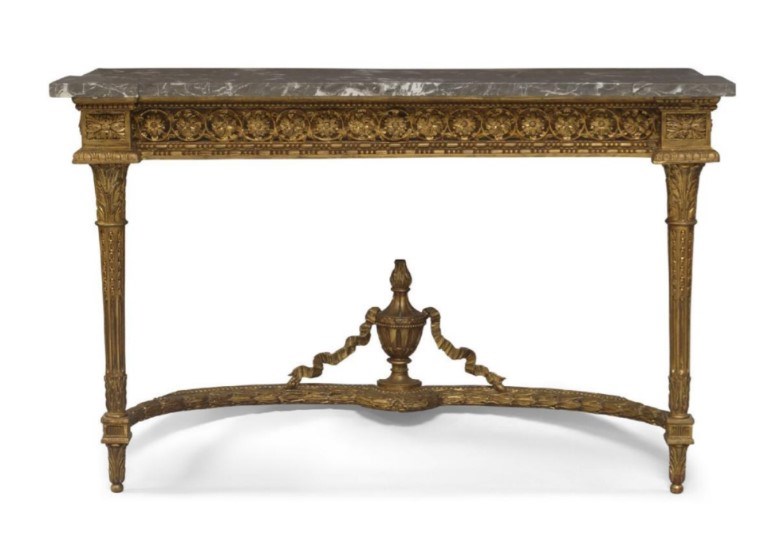 (Lot 847) This stylish pair of tables attracted interest from two private bidders, eventually selling for £7000 to a UK online bidder.  In need of restoration, the attractive marble tops and elegant design demonstrated that if furniture has the right ‘look’ it will achieve strong bidding.

The next Fine & Decorative auction will take place on Wednesday 23 March, 2022.

The department are now welcoming consignments.