Roseberys are delighted to offer our final Old Master, 18th & 19th Century Pictures auction of the year on Tuesday 24 November, starting at 11am. The upcoming sale that comprises of two hundred and twenty-four lots in total includes paintings, drawings and prints from a multitude of schools and genres, many from esteemed private collections. The auction ends with twenty-one lots of beautiful frames, sure to spike the interest of avid collectors.

Once again, we are pleased to present an auction which has a traditional and broad array of works from the 15th century to the late 19th century. In the collection of works from Victor Lownes III and other consignors there were many interesting research projects, that were taken for this auction, which in turn has led to wonderful discoveries. My personal highlight is lot 5, a work on paper from the studio of Italian artist Taddeo Zuccaro, for which we worked closely on the research with expert James Mundy. We are also pleased to present over twenty lots of beautifully carved, gilt wood and composition frames from the 17th century onwards. 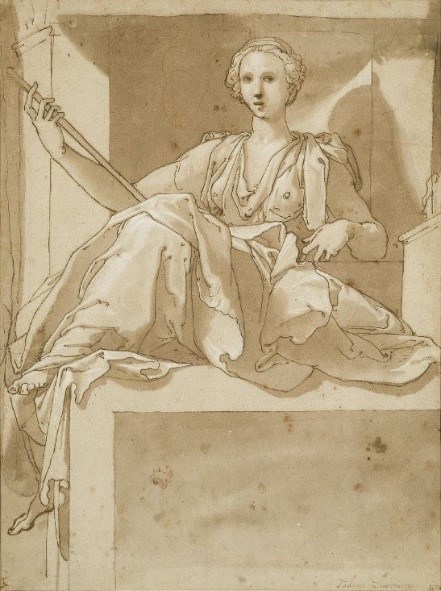 The leading highlight of the sale is lot 5, a work on paper, coming from the studio of Italian artist Taddeo Zuccaro. Seated Woman holding a staff is estimated to sell for £10,000 – £15,000. Taddeo Zuccaro was an Italian painter, one of the most popular members of the Roman mannerist school. The figure in this drawing appears over the window in the Sala dei Fasti Farnesiani of the Palazzo Farnese in Rome. Taddeo Zuccaro, was asked to complete the two short walls of the chamber in Palazzo, however, upon his sudden death in September of 1566 the work remained unfinished and was finally completed by his younger brother Federico. The present drawing is one of at least eight sheets related to the figure, thought to represent Valor. Initially the work could be interpreted as a studio copy due to the heavier use of wash and thinner white heightening to flatten the overall effect, however, it may also be a study of light and shade. It was meant to serve as a useful document as it moved through the design and production phases, and as such is a contemporary copy that had a purpose and function. The present drawing was probably executed under Taddeo’s strict supervision between 1564 and 1566 or his brother Federico when he came on board later in 1566. This work of art is an essential part of the fabric and context behind the Farnese Palace’s design. This lot has come from highly regarded collections over the last four hundred years. We are grateful to James Mundy for his assistance in the cataloguing of this lot.

Highlights coming from the collection of Victor Lownes III

Within the auction is numerous works from the esteemed private collection of Victor Aubrey Lownes III (April 17, 1928-January 11, 2017). Lownes was an executive for HMH Publishing Company Inc., later known as Playboy Enterprises, from 1955 through the early 1980s. Leading the highlights from his collection is lot 126 by Indonesian artist Raden Sjarief Bastaman Saleh. 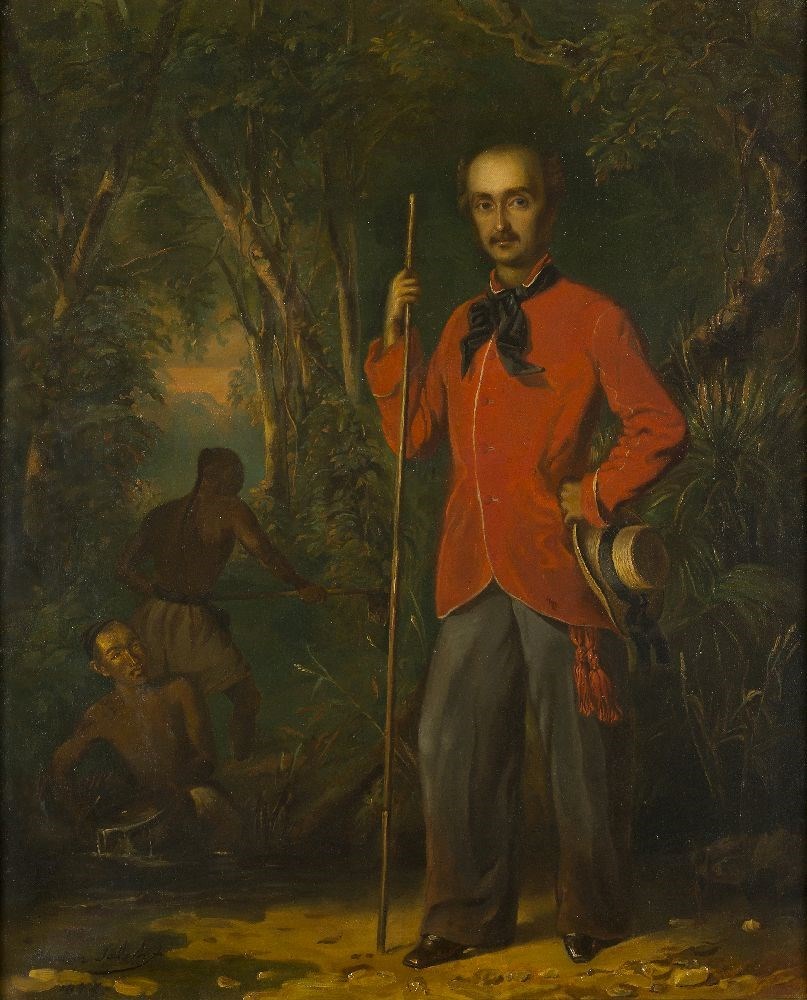 Estimated to sell for £10,000- £20,000, is an oil on canvas by Indonesian artist Raden Sjarief Bastaman Saleh, 1811-1880, depicting a portrait of John Francis Loudon (1821-1895) (Lot 126). Saleh was a pioneering Indonesian Romantic painter of Arab-Javanese ethnicity. He was considered to be the first "modern" artist from Indonesia, and his paintings corresponded with nineteenth-century romanticism which was popular in Europe at the time. Saleh was born into a noble Indonesian family on the island of Java, which was part of the Dutch East Indies. He would go onto train under the Belgian artist Antoine Payen, and in 1829 was awarded a scholarship from the Dutch government, settling in The Hague to complete his training with the renowned artists Cornelis Kruseman and Andreas Schelfhout. In 1851 Saleh returned to Indonesia and became a prominent society painter. The present lot, dated 1855, was painted soon after Saleh’s return. The sitter John Francis Loudon was commercially active in the Dutch East Indies in the 1840s-50s. In 1850, Loudon played a vital role in discovering the largest tin deposit until today. It is thought that the present lot was commissioned by Loudon to celebrate this achievement.

Two lots coming from Lownes’s private collection are by Dutch Master, Jan Griffier the Younger, 1698-1773. Lot 33, an oil on canvas, Riders with a view of a manor house, is estimated to make £10,000- £15,000. Lot 32, View of a manor house, has been entered into the market at a lower estimate of £6,000- £10,000. Little is known about the enigmatic Jan Griffier the Younger, but he is thought to have been baptised in Amsterdam and was active in Great Britain. He is best known for his animated paintings of animals and landscapes. Like his father, the acclaimed Jan Griffier I (c.1645-1718), Griffier the younger preferred panoramic bird’s eye view formats. This is evident in the present works on offer. Griffier’s most impressive works have similar bird’s eye views, such as his View of Winchester in the city’s art gallery and the View of the Thames during the Great Frost of 1739 in Guildhall Art Gallery. 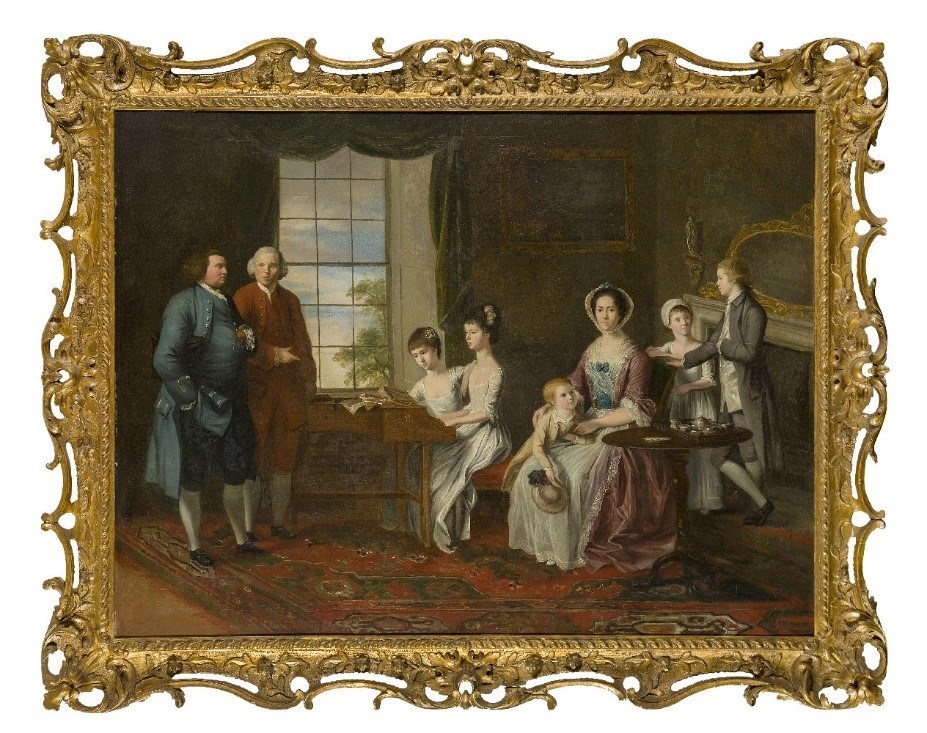 Lot 51 : English School, circa 1760-1780- Portrait of Sir John and Lady Hopkins with their children, and Doctor Boutflower; oil on canvas

Completing the highlights from the Private collection of Victor Aubrey Lownes III is Lot 51, an oil on canvas, Portrait of Sir John and Lady Hopkins with their children, and Doctor Boutflower. Thought to be by a highly-skilled English artist (completed sometime around 1760-1780), this family portrait has been entered onto the market at £8,000 to 12,000. Sir John Hopkins (d.1796) married Anne Simkins and together they had five children; William, Charles, Mary Ann, Amelia and Elizabeth (1755-1830). Nathaniel Boutflower was a successful doctor in London who married Ann, Sir John’s sister. Sir John was a wholesale greengrocer who imported spices from the Far East. In 1791, he was elected Lord Mayor of London. 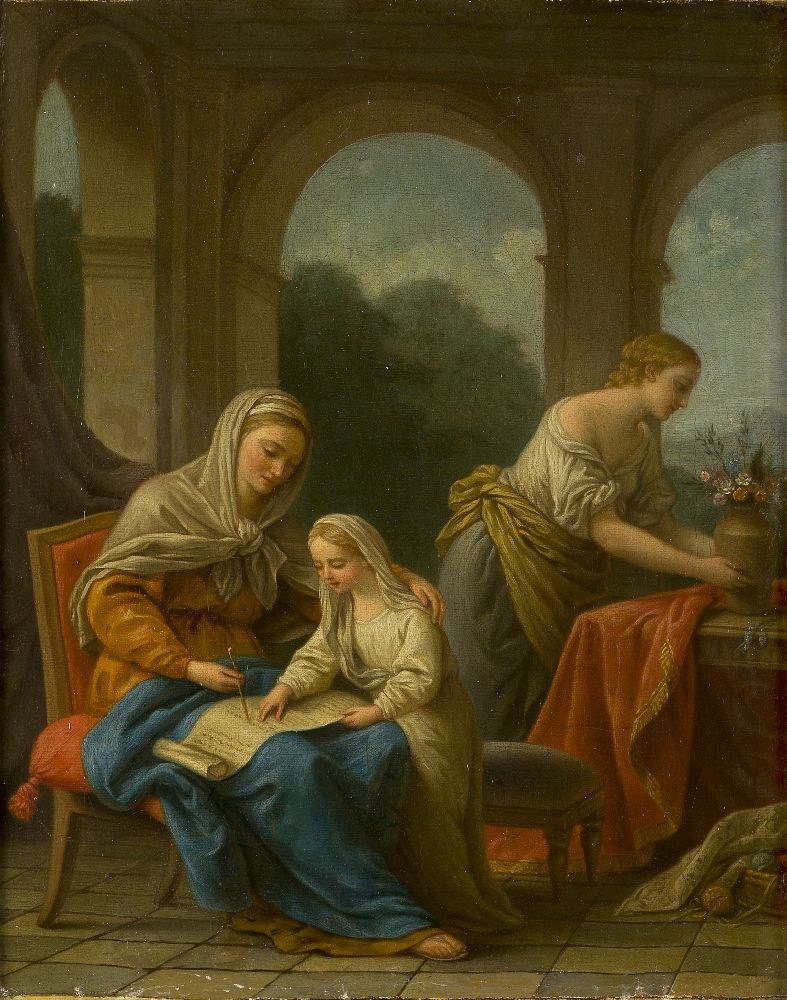 Coming from the studio of a French Master is lot 45. The oil on canvas, confirmed to be associated with the studio of Louis-Jean-François Lagrenée, 1725-1805, is a copy of The Education of the Virgin; which has been estimated to make £6,000- £8,000. Lagrenée was a French rococo painter and student of Carle van Loo. He won the Grand Prix de Rome for painting in 1749 and was elected a member of the Académie royale de peinture et de sculpture in 1755. The original canvas and paint surface of the present work supports a date from the second half of 18th Century, not long after the original version, on copper, was executed for Mme. Geoffrin in 1773. When comparing the fully attributed painting and the present work on offer it appears to be a faithful and competent copy, with many of the features being consistent with an attribution to Lagrenée's studio.

Thought to be by a Flemish follower of Paul Bril (c.1553/4-1626) is Lot 4. Paul Bril was a Flemish painter and printmaker principally known for his landscapes, spending most of his active career in Rome. His Italianate landscapes had a major influence on landscape painting in Italy and Northern Europe. A very similar version of the present oil on panel painting by Paul Bril is held by the Gemäldegalerie Alte Meister, Dresden, Germany. It is likely that the painting on offer was executed during a period when numerous Dutch and Flemish artists based themselves in Italy; creating a genre of art that amalgamates the Northern European and Italian styles. These artists were known as 'The Bentvueghels', a society mostly active in Rome from 1620-1720. This work is estimated to make £1,500- £2,500. 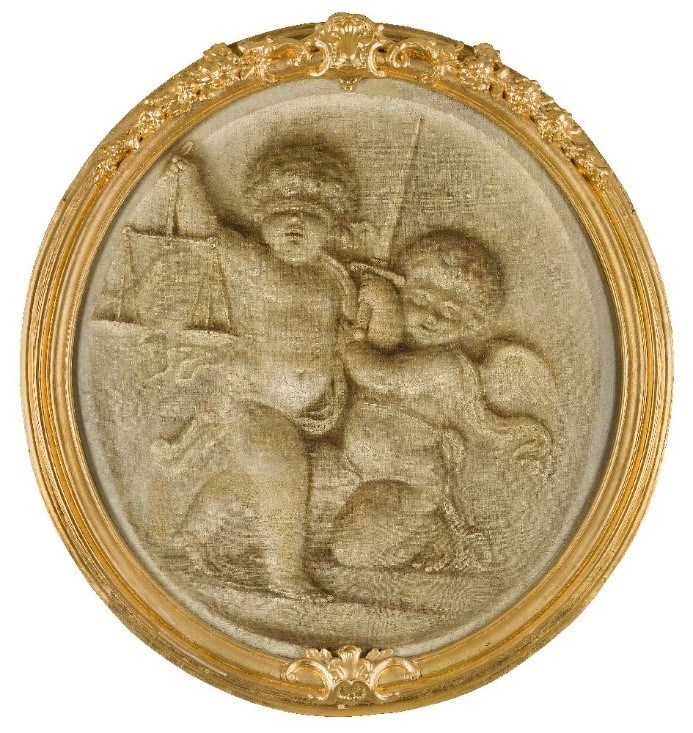 Another work hailing from Belgium is lot 46, circle of Piat Joseph Sauvage,1744-1818. The oil on canvas titled Allegory of Justice is estimated to make £4,000- £6,000. This trompe-l'œil work is a beautiful example of the popular en grisaille, tondo style of the Renaissance era. 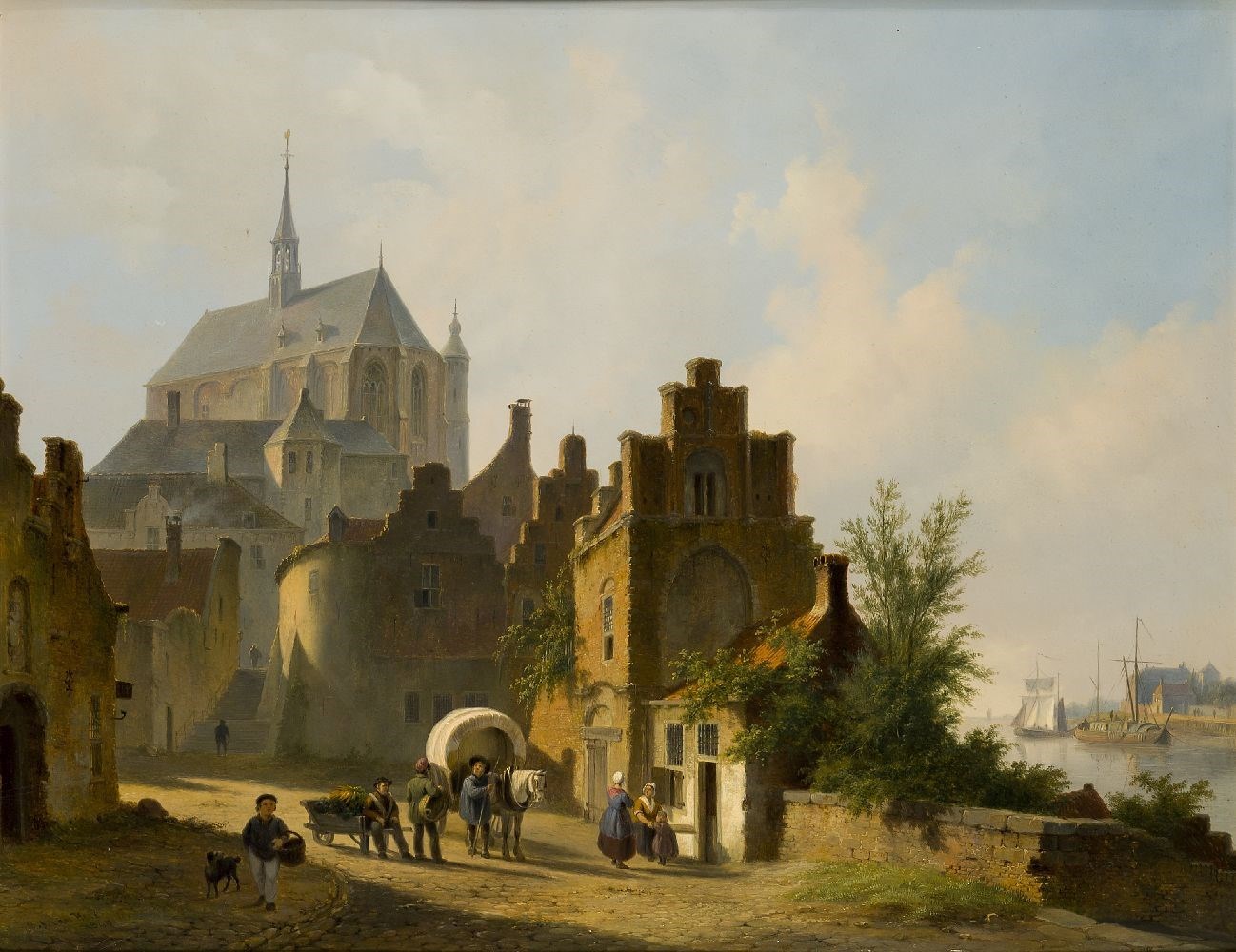 Lot 108 an oil on panel by Dutch artist Bartholomeus van Hove, 1790-1880, titled A capriccio view of a Dutch Town; is estimated to make £3,000- £5,000. Bartholomeus Van Hove played a vital role in the revitalisation of Dutch C19th painting as an artist and as the teacher of numerous influential figures including Johannes Bosboom and Jan Hendrik Weissenbruch. In 1847 he was a founder of the pioneering Pulchri Studio in The Hague, modelled in part on the Barbizon artist colony near Fontainbleau. This work dates from the middle of an important five-year period (1847-1851) in which he served as the first president of the group. The work on offer at Roseberys is a wonderful example of Hove’s work as he was most famously known for his town, city and church views. 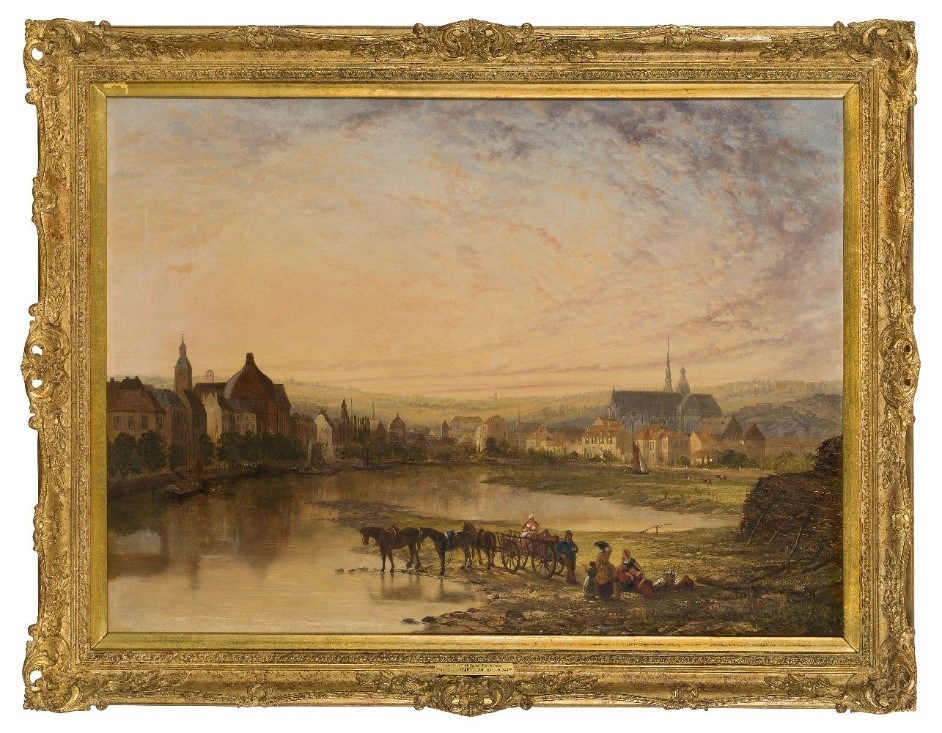 Elsewhere in the sale, three other stand-out lots come from the British School. Lot 86, an oil on canvas by Sir Augustus Wall Callcott RA, 1779-1884, titled A view of Dordrecht at Sunset, c.1830-40; is estimated to make between £4,000- £6,000. This is a classic scene from the British landscape painter Callcott who studied under the famous colourist artist John Hoppner. Callcott was closely associated with the Royal Academy, becoming a full Academician in 1810, and was appointed as a Surveyor of the Queen’s Pictures in 1843. This scene is a typical example of Callcott’s work, clearly echoing the works of Dutch masters, like Jan van Goyen and Albert Cuyp, alongside his contemporary and friend J.M.W. Turner. Callcott’s works are housed in collections such as the Victoria and Albert Museum, the National Maritime Museum, the Royal Academy of Arts, and a number of National Trust properties. One particularly interesting aspect of this painting is its very early representation of a paddle steamer, which only came into use in the first decades of the nineteenth century. 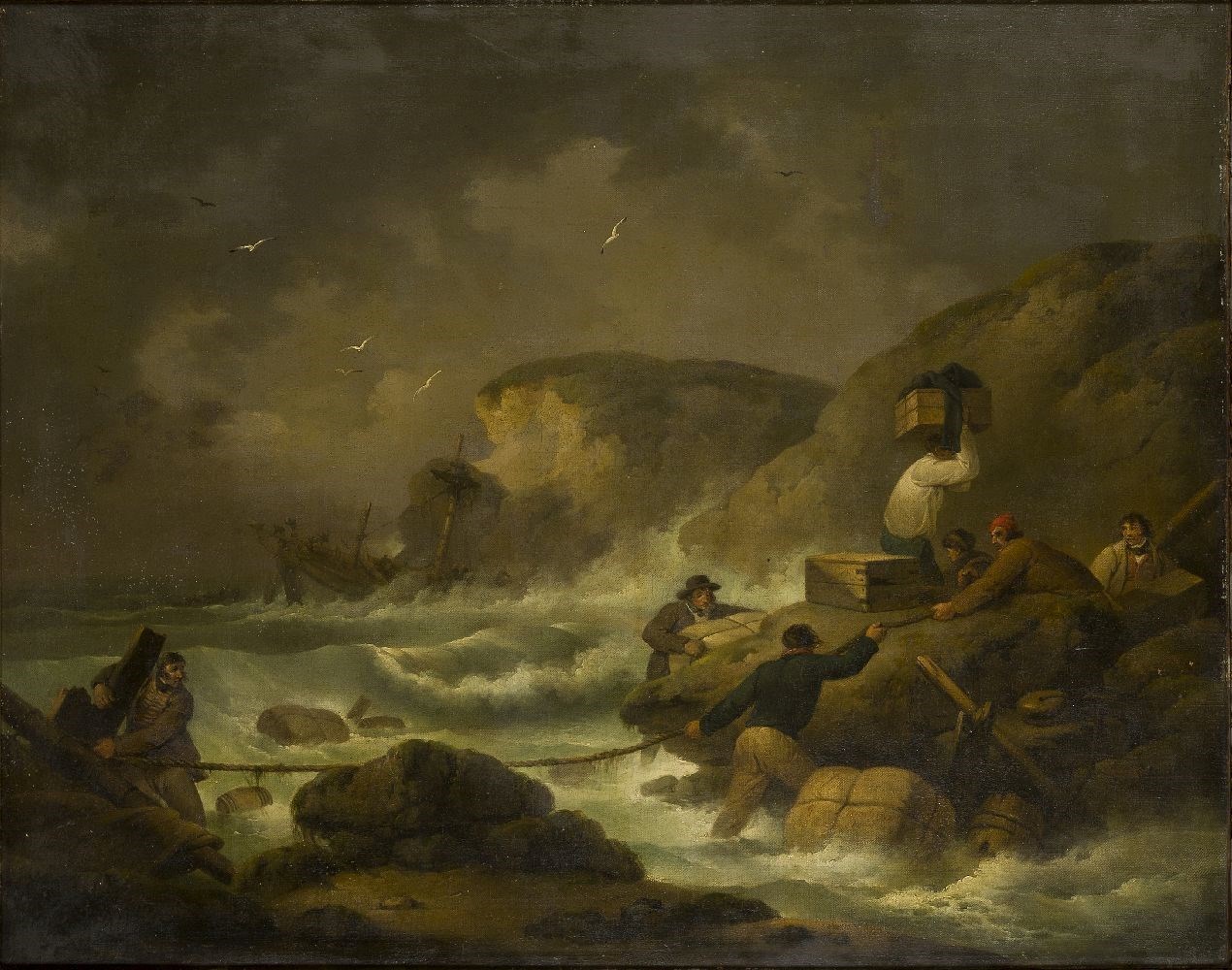 Estimated to make £3,000- £5,000 is lot 76, another oil on canvas, this time by British artist George Morland 1763-1804. Saving the Remains of a Wreck, c.1790, comes with provenance from J Leger & Son, London, 1930 and was likely to have been exhibited at the Royal Academy, London in 1804. According to one of Morland’s biographers, Saving the Remains of a Wreck was probably painted earlier and derived from the artist’s Isle of Wight period. 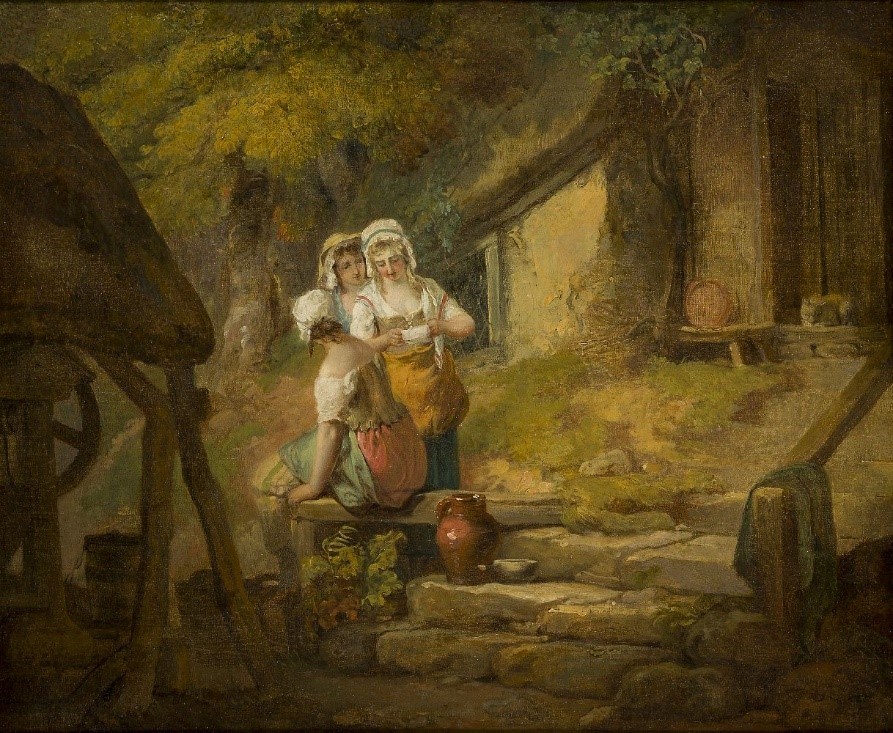 The final leading highlight on offer from a British artist is lot 52. The oil on canvas dated 1790, Three Country Girls by a Well, by the portrait and landscape painter Francis Wheatley RA, 1747-1801, is estimated to make  £2,000- £3,000 at auction. This painting was exhibited at the Yorkshire Exhibition of Arts & Manufactures, Leeds Exhibition in 1875.

Ending the sale are twenty-one lots of frames. The highlight is lot 206, a carved and gilded Louis XIII style frame, 18th century, with leaf sight, plain hollow, the cross-hatched ogee with scrolling foliate and flowerhead strapwork and schematic leaf corners. This frame is estimated to make £400- £600 at auction, and is offered along with a number of other beautifully carved frames.

For further information on the auction please contact pictures@roseberys.co.uk