ROSEBERYS LONDON: On Thursday 25 March, Roseberys are proud to present the Fine & Decorative auction that compromises of 534 lots. Anna Evans, Head of the Fine & Decorative Department comments: ‘The first Fine & Decorative sale of 2021 includes a fascinating cross-section of items to suit all tastes and budgets. Included in the sale are wonderful furnishing pieces for the home from furniture and rugs to sculpture and lighting. The sale also includes 70 lots of collectable Masonic items.  Formed over a number of years, the collection includes jewellery, glassware and ceramics used in the ceremonial activities of the society.’ 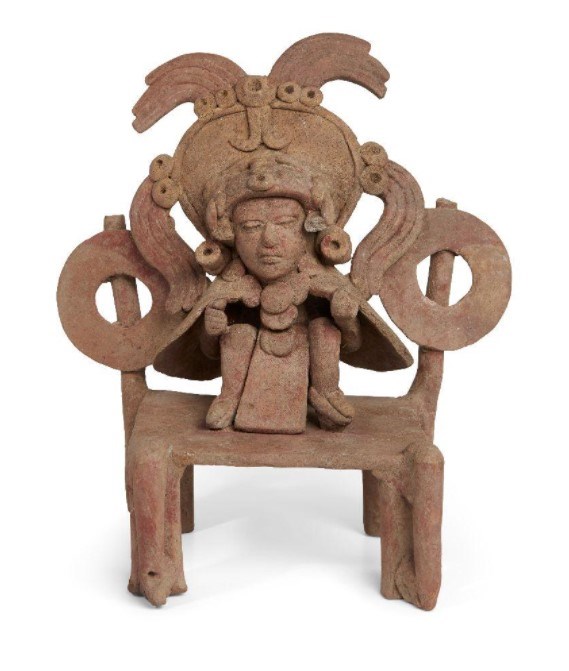 A Teotihuacan terracotta sculpture of a seated figure on a throne, Early Classic period, c. 300-600 A.D., with traces of red and ochre pigment

Leading the highlights within the sale is lot 287, a Teotihuacan terracotta sculpture of a seated figure on a throne, Early Classic period, c. 300-600 A.D. With an estimate of £4,000- £6,000 this richly attired lord may have been made in south-central Veracruz, where Teotihuacan merchants and soldiers established an enclave at Matacapan around A.D. 400. The large size of the piece, as well as the headdress and flaring stiff cape on the figure are reminiscent of south-central Veracruz figurines, while the broad face and stylized feathered butterfly element atop the turban are Teotihuacan design features. It is thought that Teotihuacanos took over Matacapan in order to expand trade in central Mexico between Veracruz and the Maya area.

Entered onto the market at £3,000- £5,000 is lot 387, a George II japanned longcase clock by Markwick Markham, London, c.1750. The partnership of James Markwick, who was Master of the Clockmakers' Company in 1720, and Robert Markham flourished from 1725 to 1805. The firm specialized in the manufacture of watches, musical and ordinary clocks mainly for the Ottoman market.

Lot 372 on offer within the auction is a cased builder's scale model of a 'Supercore' specialised fruit cargo ship that is estimated to make between £3,000- £5,000. A similar model of the 1973 Supercore named ‘Orange’ also by Langesund Miniatyrskipsbyggeri exists in the collection of the National Maritime Museum in Greenwich, London, object ID SLR2823. 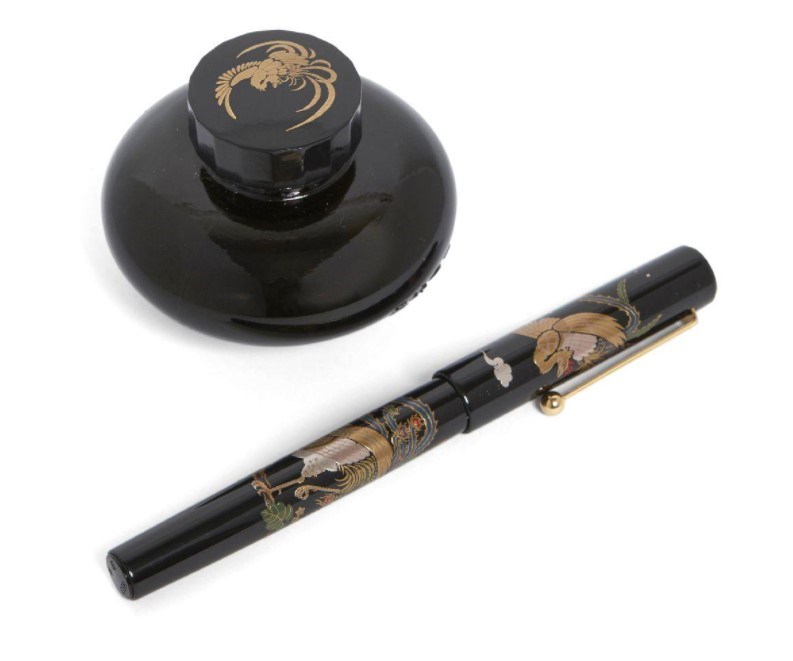 Entered onto the market with an estimate of £2,500 – £3,500 is lot 307, a Pilot Namiki limited edition 'Double Phoenix' fountain pen to commemorate the inauguration of the Emperor Akihito, c.1990. It is one of an edition of 1000.  The intricate Maki-e raised artwork features the gold and silver phoenix bird set within elaborately detailed and colourful foliage. The pocket clip is engraved with a phoenix representing eternity. 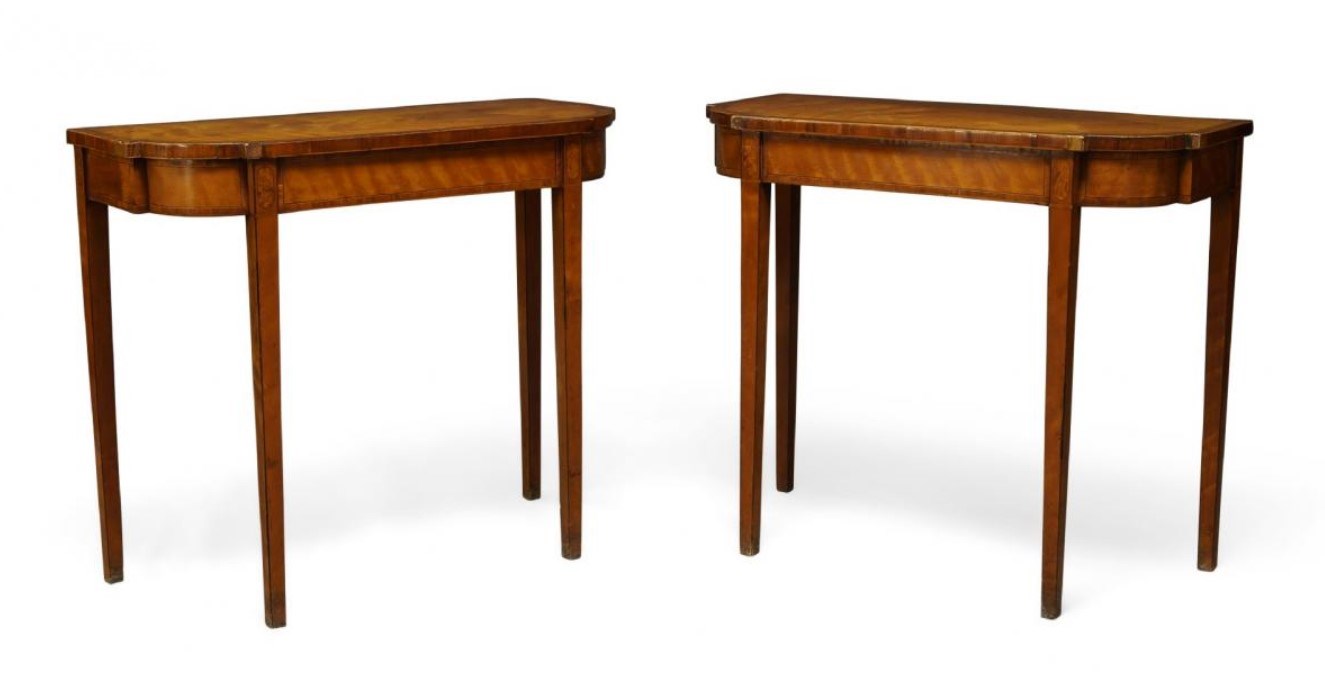 A pair of George III satinwood and tulipwood crossbanded side tables

A highlight from the selection of furniture on offer within the sale is lot 448, a pair of George III satinwood and tulipwood crossbanded side tables. The delightful pair are estimated to make £1,500- £2,000 and would make a fine addition to someone’s traditional interior.

Within the sale is a prominent collection of fine silverware. Lot 4 is a notable highlight from the collection, a large silver dish of oval form, from the renowned brand Tiffany & Co. The wide rim of the dish is engraved with scrolling foliate designs and applied silver shell decoration and the perimeter of the dish with acanthus leaf band. The reverse is stamped sterling silver 925-1000 and the dish weighs approximately 94oz. This lot is on offer with an estimate of £1,200- £1,800. 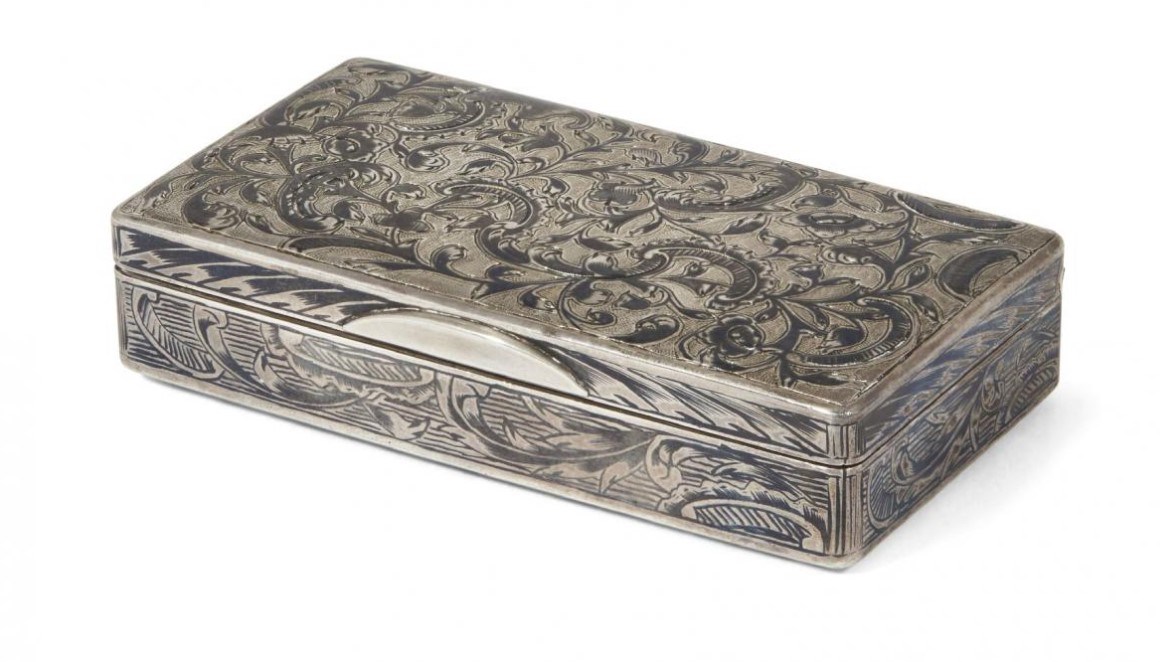 
A 19th century Russian silver and niello tobacco box (lot 105), from Moscow, c.1850 is another example of the silver on offer within the auction with an estimate of £200- £300. From the presentation engraving, it is possible that this box may have belonged to Thomas T. Wingett M.D, Medical Superintendent at the Dundee Royal Lunatic Asylum as described in the Dundee Directory of 1856-57. 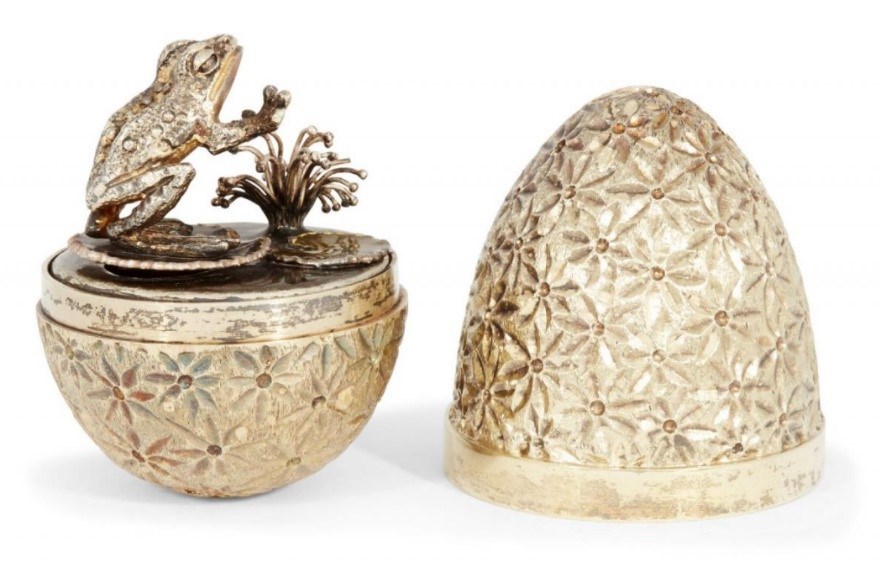 Lots 76 – 94 is a group of silver-gilt items by Stuart Devlin, including fifteen surprise eggs. Stuart Devlin (1931 - 2018) was an Australian artist and metalworker, specialising in gold and silver. In 1965, following his move to London, Devlin became known for limited edition pieces, such as Christmas boxes and Easter eggs which are highly sort after by collectors around the world. The works on offer range in estimates from prices of £120 –  £300, making a perfect alternative gift for Easter. 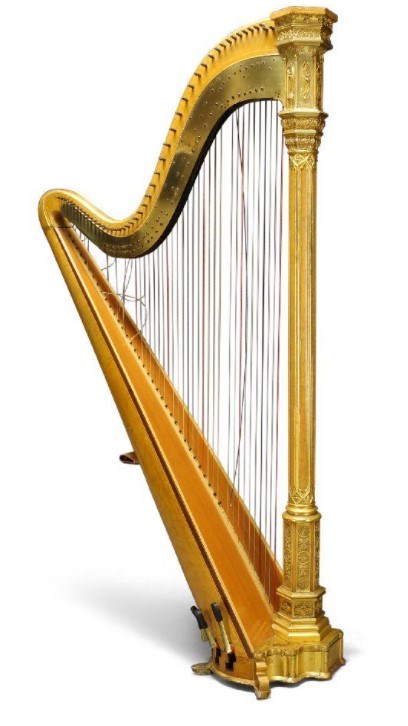 Lot 454, a Victorian parcel-gilt Gothic style harp, by Sebastian and Pierre Erard comes with an estimate of £800 –  £1,200. Sebastian Erard was born in 1752 in Strasburg, in 1768 he moved to Paris where he soon became one of the great instrument makers of his time. At the onset of the French Revolution in 1789 he moved Great Marlborough Street, London.  In 1810, he patented the double-action harp with seven pedals, which forms the basis of modern concert harps. Erard & Co. remained active into the 20th Century. 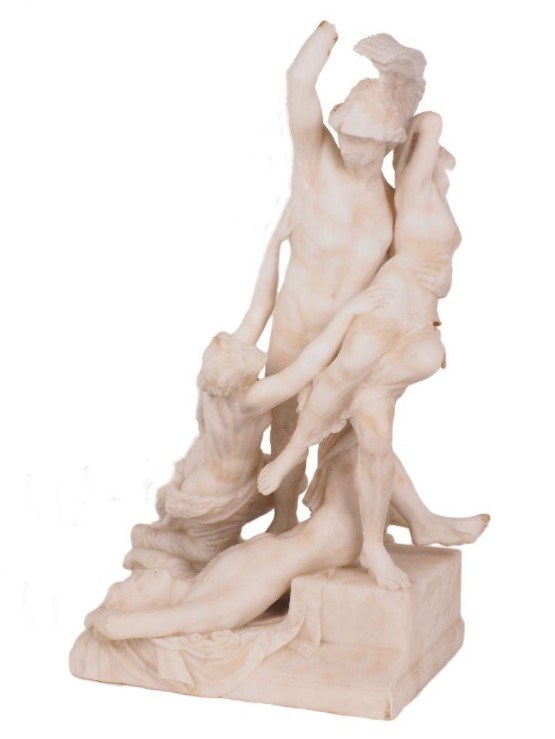 
Estimated to make £500 – £700 is lot 349, a marble sculpture depicting The Rape of Polyxena by Italian sculptor (1825-1895) Pietro Bazzanti. Bazzanti was a central figure in the production of Florentine sculpture at the end of the 19th century, regarded as one of the most talented sculptors of his day. He specialized in allegorical and genre subjects as well as copies of antique and Renaissance sculpture. As a follower of the Neoclassical sculptor Lorenzo Bartolini, Bazzanti later became a proponent of the Realist style. His studio in Florence became a place for other important sculptors to practice their craft. 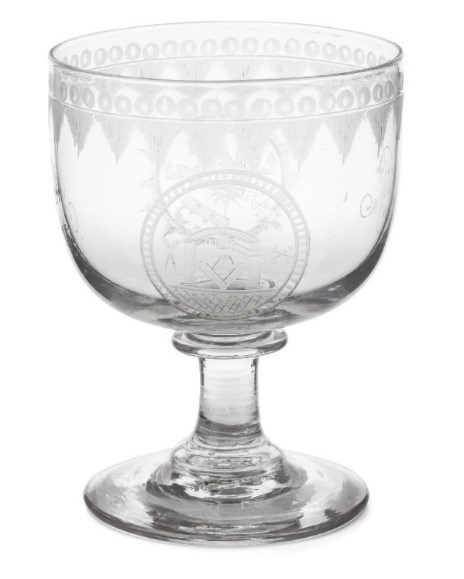 Lots 165 – 236 within the auction are a collection of Masonic items, including ceremonial items of jewellery, ceramics, glassware and books, with estimates that range from £100- £1,000. For hundreds of years the Freemasons have been one of the most mysterious and talked-about fraternal societies in the world. Established as a non-religious, non-political, charitable organisation. The symbolism associated with the Freemasons has generated much interest over the years; symbols include the All-Seeing Eye, the Blazing Star and perhaps the most important, the Square and Compasses. Lot 209, a George III Masonic glass rummer, c. 1800 - 1810, of typical form, the bowl engraved with Masonic symbols and initial 'R', is the highlight of a wide collection of Masonic glassware within the auction. Measuring 12cm high, this lot is estimated to make £300-500. Pieces such as these and their modern counterparts are used for masonic ceremonies such as consecrations and anniversaries of the foundations of lodges. 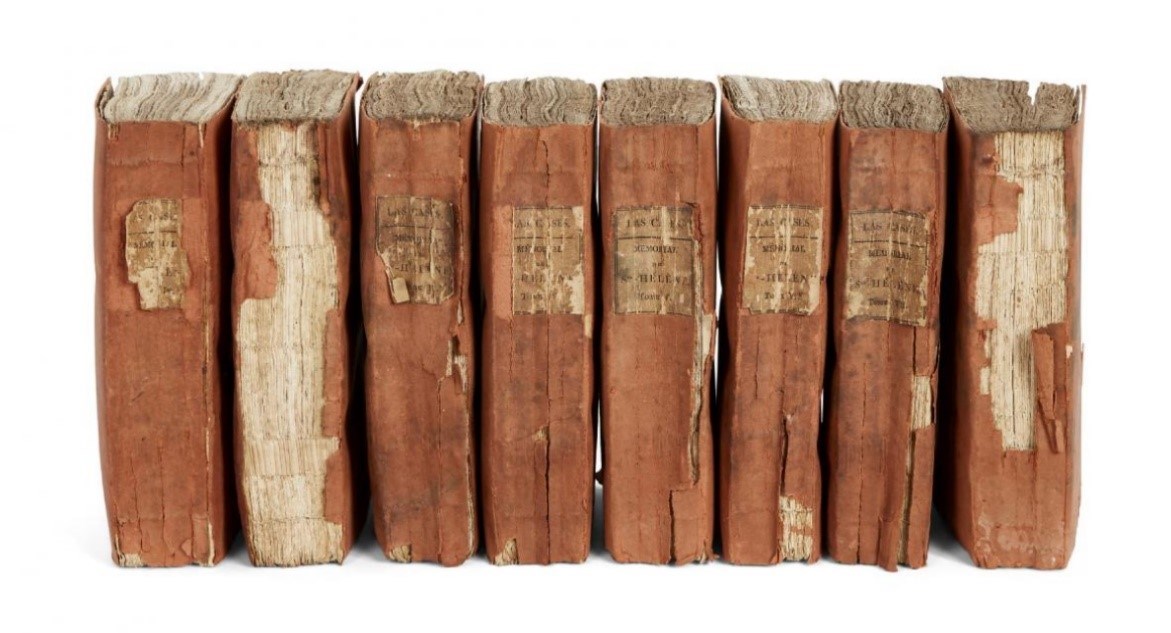 Another staple feature within the Fine & Decorative auctions are books. Lot 237 is the highlight of the collection on offer on the 25 March, with an estimate of £1,000- £2,000.  LAS CASES, Emmanuel de (1766-1842)., MÉMORIAL DE SAINTE-HÉLÈNE, OU JOURNAL OU SE TROUVE CONSIGNÉ, JOUR PAR JOUR, CE QU’A DIT ET FAIT NAPOLÉON DURANT DIX-HUIT MOIS, are very early first editions.  Included are 8 volumes in red paperback, paper labelled spine, to green leather cases from Imprimerie De Lebégue in Paris, 1823. The books come with a provenance from a private collection belonging to descendants of Emmanuel De Las Cases. Thought to be one of the very first copies of the author's 8 volume work. Offered at auction 200 years after Napoleon Bonaparte's death (May 5th 1821). They are thought not to have left the Las Cases family until now.