A Guercino drawing that was a pure discovery 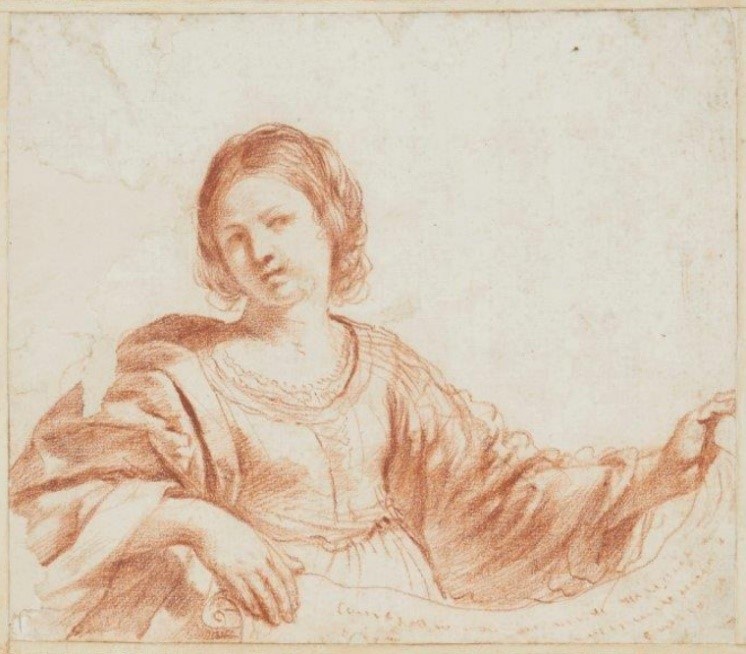 Workshop of Giovanni Francesco Barbieri, called Il Guercino, Italian 1591-1666- Study of a woman half-length with arm outstretched; was found during a probate valuation, performed by Roseberys Fine Art Auctioneers. Estimated to make £1,000 - £2,000, the red chalk on laid paper artwork went on to make £6,875 in the Old Master, 18th & 19th Century Pictures auction on 4 June, 2020 - over three times its top estimate, to the delight of all involved.

“The deceased home was absolutely ordinary, with nothing extraordinary, but this drawing caught the specialist’s attention, it was true gem” – noted Maria Zuccon, Professional Services and Valuations Manager, on the discovery.

“The Inheritance Tax valuation was so straight forward that the executors decided to sell the drawing straight away, offering it to the market within Roseberys Old Master, 18th & 19th Century Pictures auction.”

When the piece came in to the office and some tests were run, Roseberys staff soon realised that the drawing was indeed a special discovery, and that of the workshop of Giovanni Francesco Barbieri, better known as Guercino, or il Guercino. Guercino was a highly original and lyrical painter and draughtsman, from Cento in the Emilia region, who was active in Rome and Bologna. He was largely self-taught, but was strongly influenced by the bold figure painting of the Carracci family and the dramatic chiaroscuro (light and shadow) of Caravaggio. Roseberys are particularly grateful to Prof. David M. Stone for his assistance in the cataloguing of this lot, whom commented that the work resembled some preparatory studies for a painting by Guercino. Various other experts were also astonished by the details of the chiaroscuro and the gaze of the lady and in awe of this pure discovery.

There was no detailed information about where the drawing was purchased from, however the beneficiaries mentioned that they had seen this piece since they were little hanging in the house. As such they believed it was passed down from their late grandmother, who used to buy objects in flee markets.

Rosebery’s qualified and experienced valuers undertake independent valuations of personal chattels under Section 160 of the Inheritance Tax Act 1984. The reports are for both executors and solicitors who are acting on behalf of a deceased estate in compliance with the requirements of HM Revenue and Customs (HMRC). Our professional valuers use their expert knowledge and experience to ensure that the open market valuations are realistic and will not be rejected by the HMRC
A detailed inventory and valuation with all items of importance and any specific bequests is produced.

Typically, a valuer will visit the property and list all items with a value in excess of £500. In addition, any items below this level but still of saleable value will be recorded. An abbreviated valuation will be produced in line with section 160 of the 1984 Inheritance Act as well as a more detailed report for the executors.

In the event of executors or beneficiaries wish to arrange the sale of some or all of the chattels involved in an estate, then Rosebery’s provides a complete sales service. We will arrange collection of the pieces concerned, ensure their inclusion in the appropriate sales, advise on reserves where necessary and ensure a rapid settlement.

Please contact our valuations team who will be happy to discuss your requirements, our fees and how we may be able to assist.