A Collectors Guide to Qajar Ceramics

Iranian ceramics, and tiles in particular are a wonderful window into the world of industry, artistry and colour where form and function meet. Courtly life, nature and hunting, and regal portraits illustrate Persian ideas, stories and ways of life. The Islamic Arts and Manuscripts sale on June 16th presents a private collection of tiles from the Qajar dynasty (1789-1925AD) of the highest quality (lots 238-252). 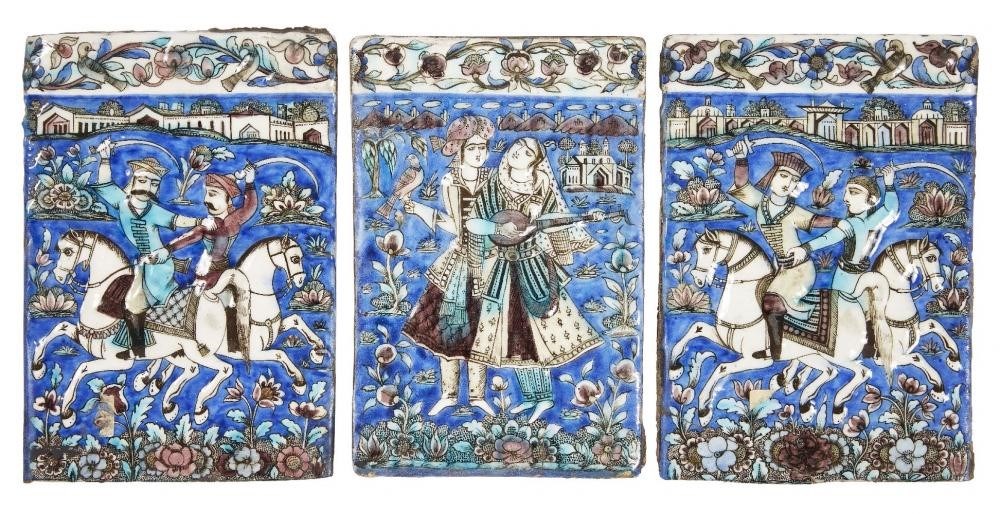 Moulded tiles such as the courtly scenes presented in Lot 238 were likely made in and around Isfahan during the mid-19th century and used in friezes to decorate interior and exterior walls of many secular buildings. They were much admired by Europeans and sold individually to visitors, similar tiles are in the Victoria and Albert Museum acquired in 1886. 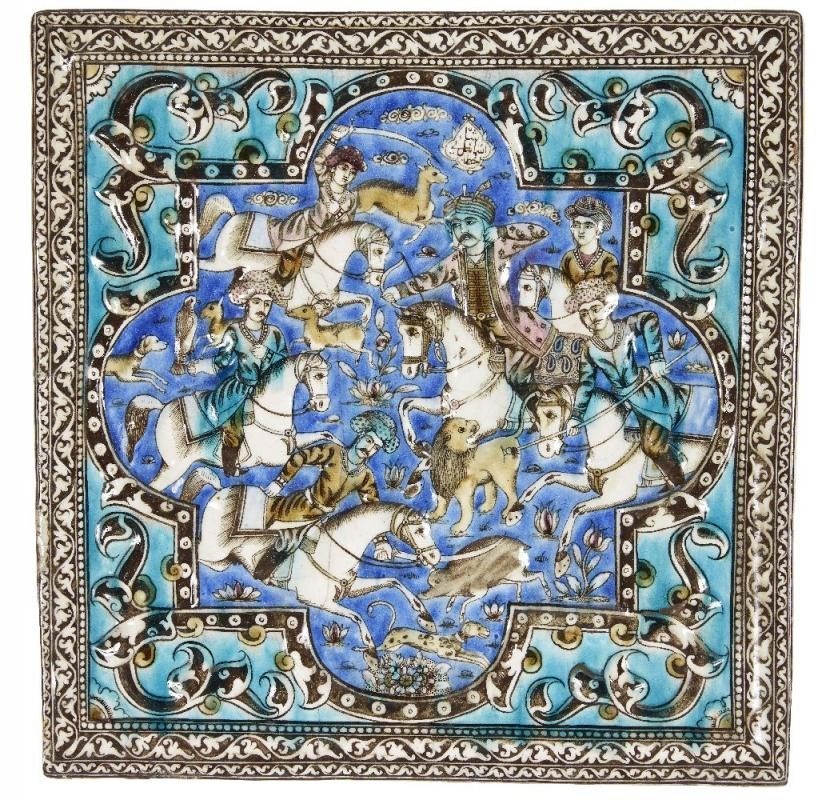 A major theme of Qajar tiles are portraits of kings and princes, both present and past, often engaged in hunting scenes. Lot 249 depicts Shah Ismail (R. 1501-1524AD) the founder of the Safavid dynasty hunting lions, deer, wild boar which his courtiers herd towards him. An inscription in Persian above his head identifies the ruler. 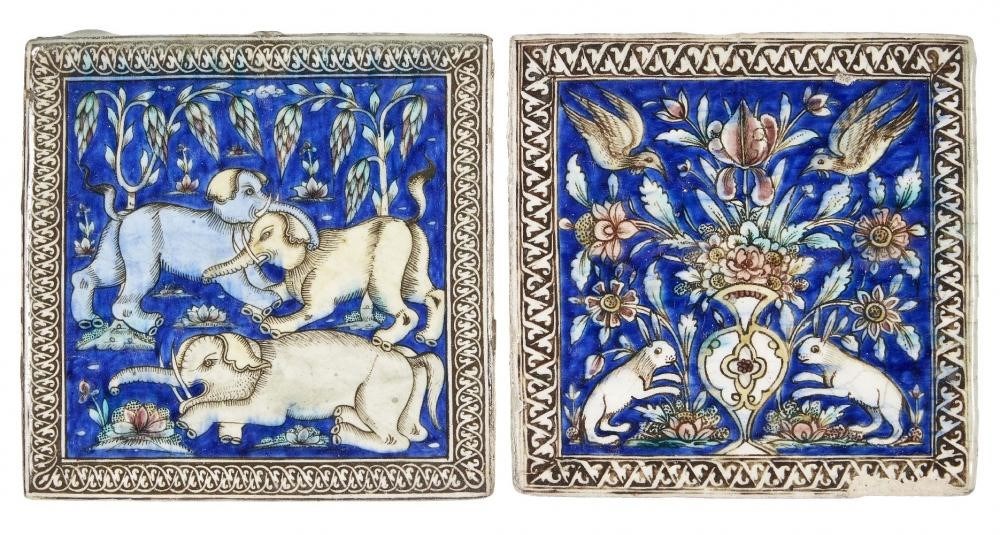 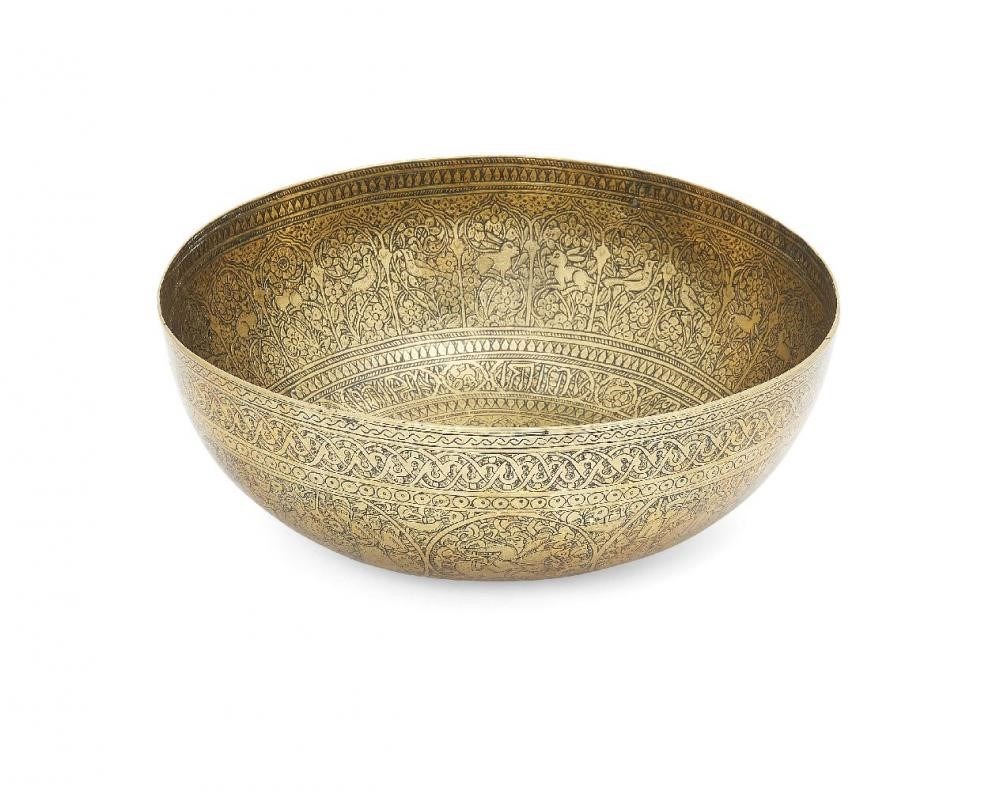 Amongst the most innovative designs introduced during the Qajar period was the use of intertwined scrolling arabesque bands in black against white (see the borders of lots 249, 252 both pictured above), also seen in metalwork of the period that can be seen Lot 277). 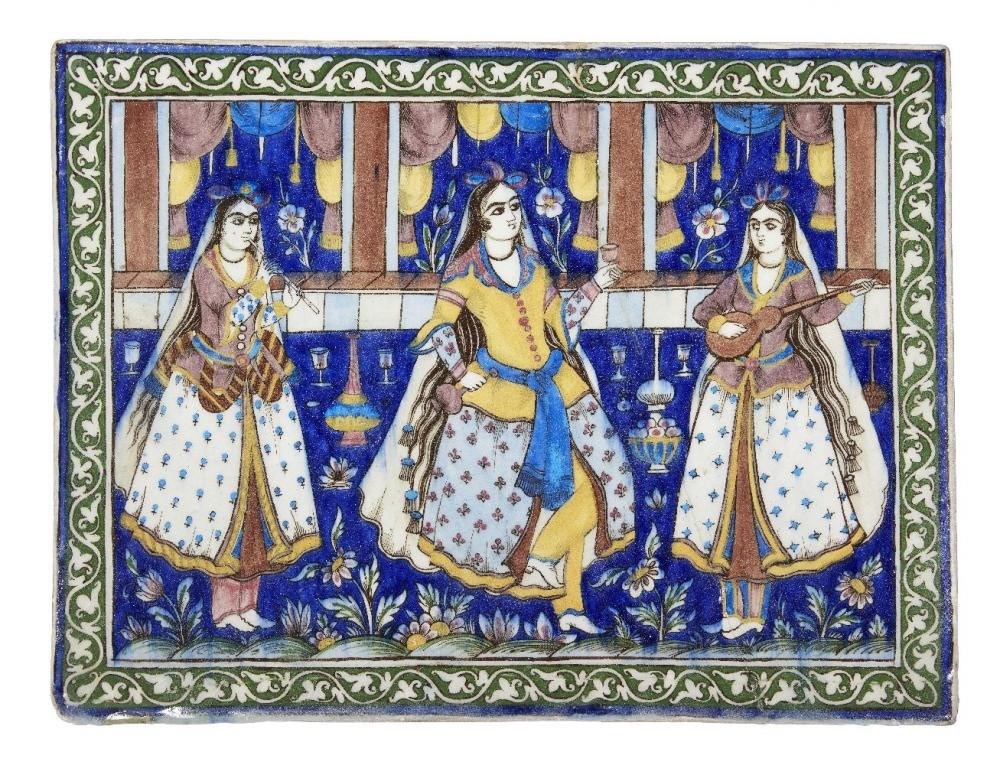 The depiction of women (see the two tiles in lot 239 pictured above ) particularly focussed on the themes of dance and music. One such scene shows a musician playing the Ney (flute), while the other plays the Tar (stringed instrument). A third dances and holds the symbolic flask and goblet. A table laden with apples usually appears in representations of women in the Qajar era, representing love and fruitfulness. The idealised portrayal of beauty is seen in their stylised features; large oval eyes, curved nose, flower-bud mouth and heavy brows.

The Islamic Art & Manuscripts auction will take place on Tuesday 16 June at 10.30 am.

FIND OUT MORE ABOUT THE HIGHLIGHTS

FIND OUT MORE INFORMATION ABOUT THE ISLAMIC & INDIAN ART DEPARTMENT