Founded by Louis-François Cartier in Paris in 1847, Cartier has been a brand known for its luxury. The Maison’s obsession for pure lines, precise shapes and precious details has led to design objects that defy decades. Alongside its jewellery designs, the Parisian house is universally revered as the brand that popularised the wristwatch at the turn of the 20th century, with the introduction of the original Santos. Shaped watches, chronograph movements and skeleton movements are all instantly recognisable in Cartier’s watch designs. Over and above a strongly defined character, the aesthetic emphasis of the Cartier watch changes with each different model according to the times.

Here we uncover the watches that have become emblems of design for women at Cartier, including the Tank, Baignoire, Santos and Pantheré. 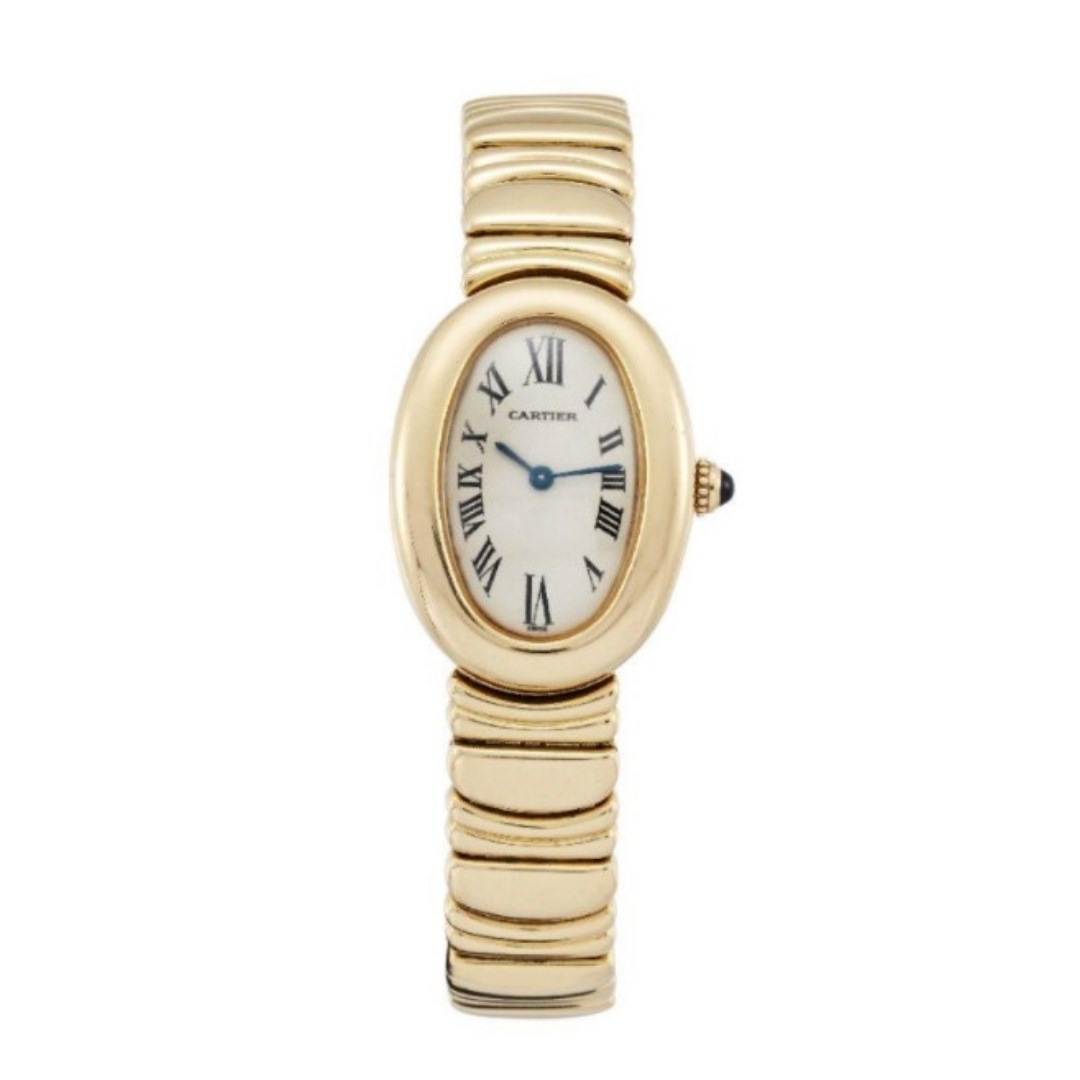 First designed in 1957, the Baignoire model has proved to be one of the most popular designs by Cartier, demonstrating the Maison’s inherent prowess in watchmaking. Defined by an elegant ellipse, forged as a single line, the elegance of the design encapsulates the essence of the Cartier style. While Baignoire cases have come in a multitude of metals, sizes and proportions, the basis for the design, a smooth oval, has carried through. Re-launched by Cartier in 1990, this version pictured above is all in 18ct gold. This watch is included in Roseberys upcoming Jewellery & Watches auction on Tuesday 14 September, 2021, and estimated to make £2,000-£3,000 at auction.

In 1917, Louis Cartier took inspiration from a purity of line to create a new watch shape, which he would title the ‘Tank’ watch. The Tank watch by Cartier is one of its most iconic designs, quite literally taking its name from the war-machines. The application of tanks on the battlefield first happened during World War 1, these terrifying new war machines inspired the brands creator Louis Cartier to create a watch that took its form, from the overhead view of a tank. A square with lugs that protruded slightly on each corner were a nod to the Renault tanks of the time. This watch follows one clear graphic principle: the brancards were the treads, the case was the turret. From this combination came a new and fundamental principal: the case attachments are aligned with the strap to maintain the rhythm of the design. Over a 100 years later, the watch remains an icon within the watch world.
The Tank watch has been worn by the rich and famous since its release and has become a must have to those in positions of importance. Andy Warhol famously said “In fact, I never wind it. I wear a Tank watch because it’s the watch to wear.” Princess Diana, Truman Capote, Fred Astaire, Gary Cooper, and Clark Gable were also Tank devotees.
Cartier has continued to produce Tank watches and release variations of the original model such as the “Tank Cilantre” which is a slimmer version of the original, alongside models that were designed for sports or that had variations in their numerical layout. 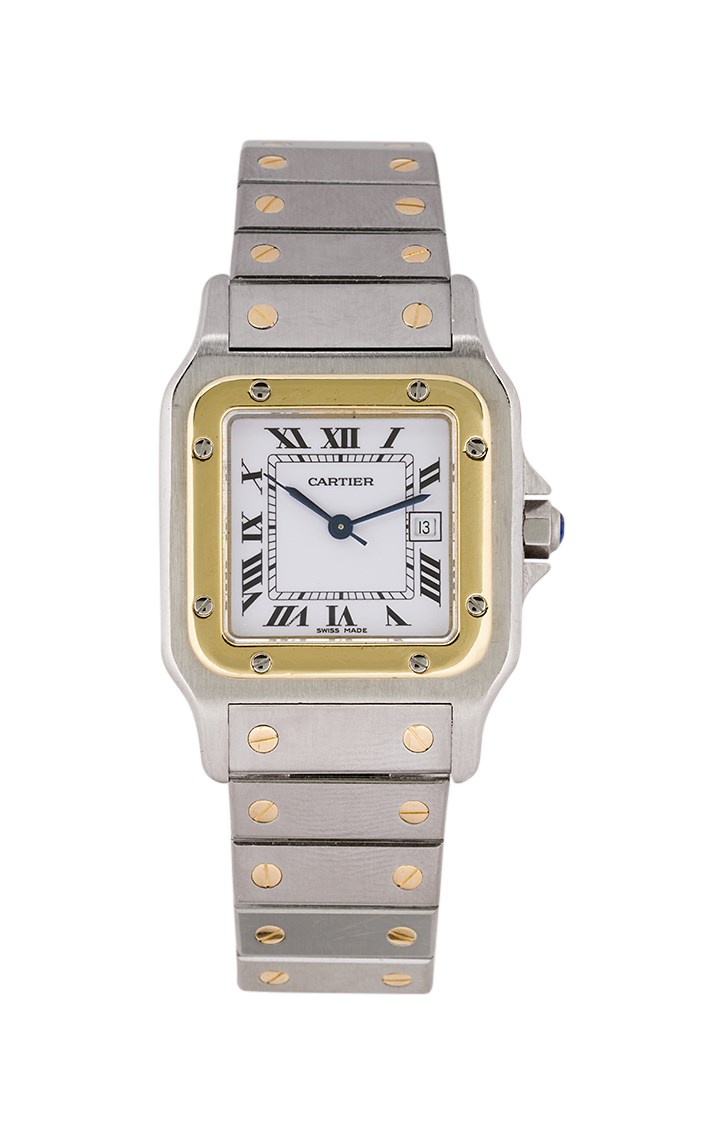 Created in 1904, the Santos watch is based on the concept of form, a taste for minimalism, the precision of proportions and finally, an eye for detail. The Cartier “Santos” takes its name from one of the pioneers of flight, Brazillian aviator Alberto Santos-Dumont. Alberto had complained to his friend Louis Cartier that pocket watches were unreliable and unpractical whilst flying. In response, Cartier designed his friend a square bezel wristwatch and granted the wish of the famous aviator: to be able to tell the time while flying. He revolutionised watchmaking by creating the first modern watch designed to be worn on the wrist. The watch eventually caught on and became popular with the wider public, thus making this the first mass produced men’s wristwatch and pilots watch.
The Santos case was inspired by the square pocket watch Cartier had produced, but the highly visible dial design telegraphs a shift to the Art Deco style that would define the 1920s and 1930s, and continues to define Cartier’s design aesthetic to this day. Since 1904, the design of the Santos de Cartier watch has been reinvented according to the times. 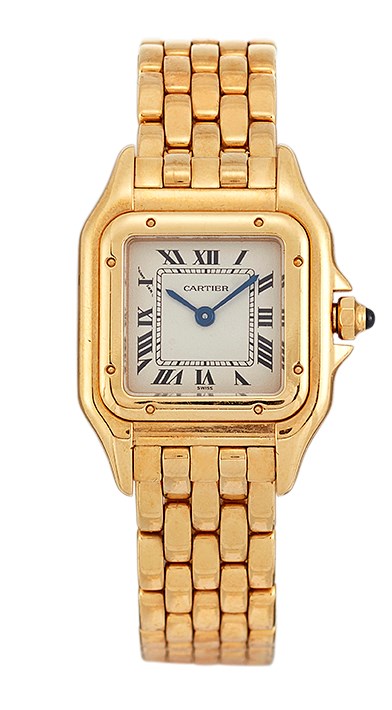 The Panthère has been a long-standing icon adopted by Cartier to represent the brand. It was first used in a watercolour commissioned in 1914 by Louis-Cartier. He liked the image that much that it became a symbol of the brand. In 1914 the first "Panthère" piece was produced by Cartier – which was a bracelet watch, set with onyx and diamonds.  The Panthère de Cartier watch collection was initially launched in 1983. When it was launched in 1983, the Panthère watch introduced the concept of a jewellery watch. This best-selling watch was embraced by the fun-loving 80s, proving particularly popular with the art scene.
The watch takes its name from Jeanne Toussaint, “the panther” Louis Cartier’s right-hand woman, design director and lover. She oversaw all jewellery made by Cartier between 1933 and 1970. The panther represented her independence, elegance and ferocity. Alongside the name of the watch, the panther is the Maison’s emblematic animal. In tribute to her dateless, “universally appreciated” taste, the Panthère is now enjoying a renaissance.

Roseberys are proud to have sold many excellent timepieces by Cartier, you can view all the upcoming Jewellery & Watches in our September the 14th sale which starts at 11am here.

If you have any Cartier watches you would like valued, Roseberys offer a complimentary valuation service here.